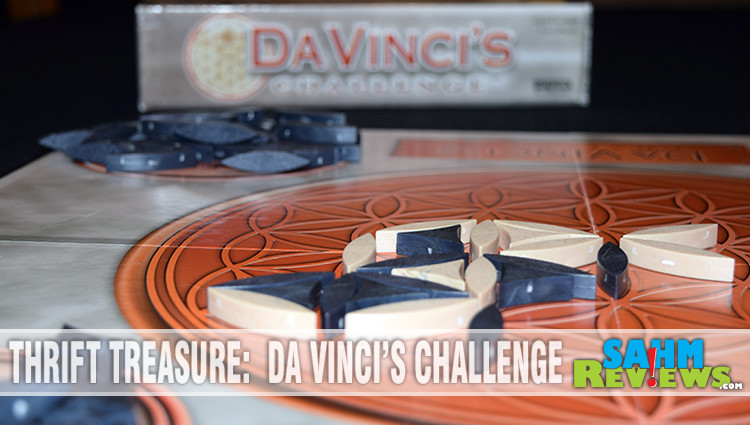 This week’s Thrift Treasure feature is a game we’ve seen many times at local thrift stores. But until now we’ve never picked up a copy because they’ve never been complete. This happens more often than not, especially with games that have many pieces. In the case of Da Vinci’s Challenge, we needed to verify that all 144 ovals and triangles were present before we would be ready to pay the $2.88 asking price. 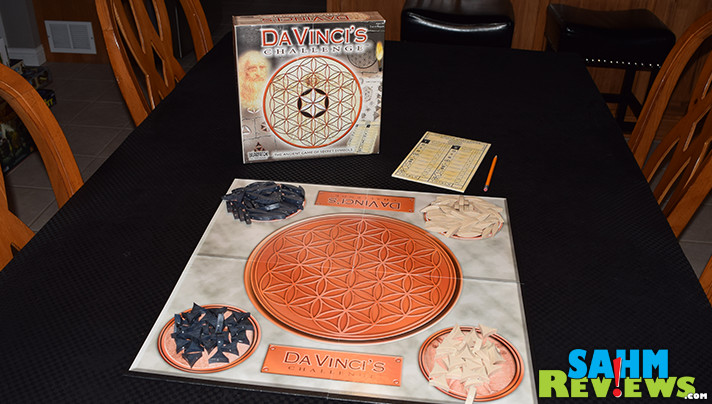 Finally, after the third try of finding and verifying the contents, we were able to purchase a copy of Da Vinci’s Challenge knowing we wouldn’t have to make substitutions for any pieces. It is an abstract game whose design had always appealed to us – now we would be able to experience the game for ourselves!

Da Vinci’s Challenge is a game of patterns inspired by a geometric construction drawn by Leonardo da Vinci. Designed for two players (or four, if played as teams), you are trying to score points by creating secret patterns by laying custom-shaped pieces onto the included board. 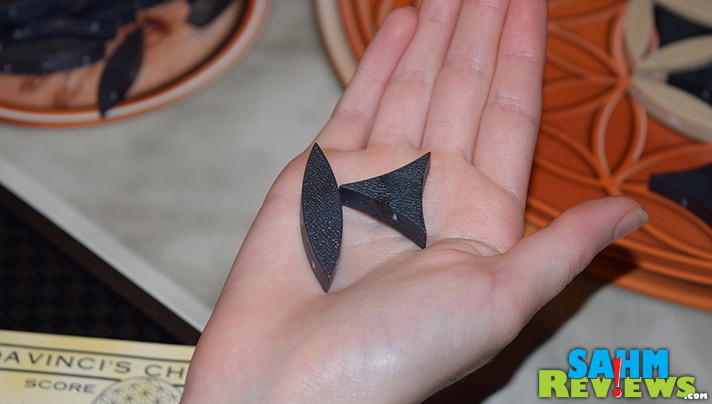 Each player receives all 72 of the pieces in their chosen color. These will be a mixture of just two shapes – ovals (more like eye-shaped) and triangles. On your turn you will simply choose one of your pieces and place it anywhere on the board in a space that matches the shape of your piece. When placing, you will declare any patterns you finish by placing that piece.

Valid patterns are a triangle (three ovals laid to form a triangle), a diamond (two adjacent triangle pieces with an oval in between them), a gem (which is the triangle shape filled in with a triangle piece), an eye (five ovals in a circle with one representing the iris of an eye) and a pyramid (four triangle pieces stacked like a pyramid).

More advanced shapes are the hourglass (two gems on top of each other), a star (six triangle pieces in a circle), a circle (six ovals arranged in a circle) and a flower (also six ovals in a circle, but creating petals of a flower). Each shape claimed is tracked on the included score sheets and laying a piece might create multiple shapes in a turn. The more difficult the shape, the more points it is worth at the end of the game! 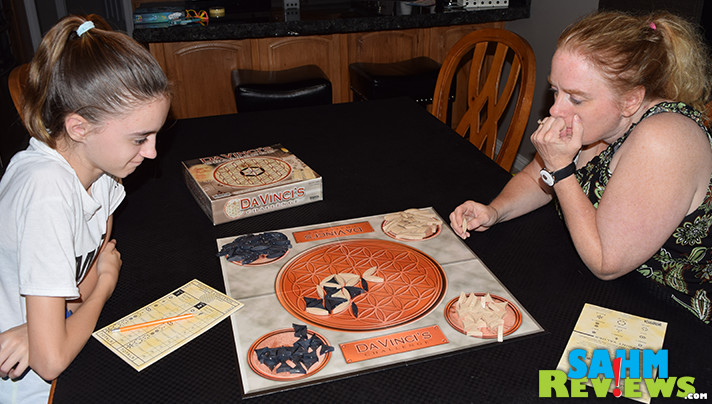 For instance, you might place an oval piece in the center of four other connected ovals, making two triangles at the same time AND an eye for a total of seven points! It is up to the player to recognize and record any completed shapes as they cannot be claimed on subsequent turns. The scoring shape must also have been completed by the exact piece played on the current turn.

Players take turns placing new pieces and either creating new shapes or blocking their opponent from doing the same. Once no more patterns may be completed by either side the game ends immediately. Using the score sheet, multiply the number of each completed pattern by the point value listed. Sum up the totals and the player with the highest store wins Da Vinci’s Challenge! 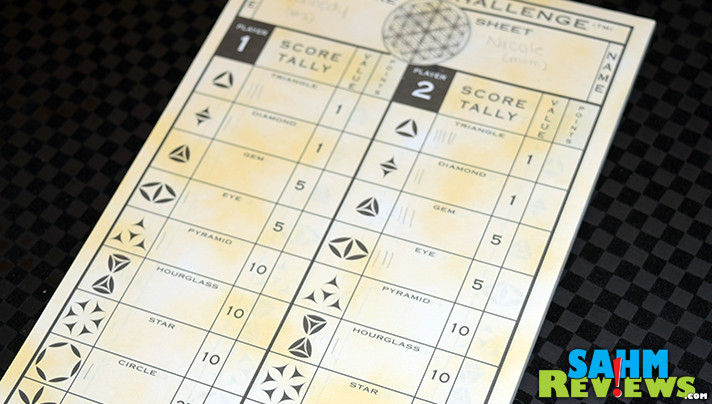 New and used copies are available on Amazon for under $25 shipped and may also still be stocked at Target and Kohl’s nationwide. As I mentioned, this is the third time we’ve found a copy at our one Goodwill, so if you’re patient you can probably pick one up for cheaper at yours. Just make sure all the pieces are there first!

What’s the last game you purchased at a thrift store?