Remember how I recently said my folks sold their acreage? My childhood home and where my parents had lived for more than four decades was no longer a place I could freely visit. It was bittersweet, but necessary. My parents were spending more time maintaining their beautiful acreage than they were finding time for themselves. While the distant location a half hour away from town provided solitude and privacy, it also meant a trip to the store was an hour endeavor at a minimum. They aren’t ones to sit still and have active calendars with projects, music lessons (you’re never to old to learn a new instrument!), volunteering their Master Gardener expertise with the local agriculture extension office, attending plays and musical performances, regularly helping my brother with childcare and more. The decision to move into town to be closer to the action was a good choice that would offer many more unforeseen benefits.

The location of their new home allows them/us to pop in and say hello while out running errands. We can have dinner with them without needing to carve an entire day out of the schedule to do so. And last week I added another thing to the plus column. I could call my mom and ask if she wanted to join me at the movies. The plot of Book Club seemed like it would be perfect. The star-studded cast sealed the deal.

Diane Keaton, Jane Fonda, Candice Bergen, and Mary Steenburgen portray four lifelong friends who are all in very different phases of the same time of their lives. Diane (Diane Keaton) is a widow with two adult daughters who treat her like she has one foot in the grave. Vivian (Jane Fonda) is a wealthy hotel tycoon who never settled down with the right man, yet never lacked companionship. Sharon (Candice Bergen) is a divorced district court judge who finds comfort in her cat. (No pun intended.) Then there’s Carol (Mary Steenburgen) who is happily married to her longtime sweetheart with a seemingly perfect marriage. Seemingly.

These women who have been longtime friends meet monthly for Book Club with the book of the month selection rotating between the women. One fateful month, Vivian decided to they needed to spice up their lives by reading 50 Shades of Grey. And this is where things get interesting – for all of us.

I’ve never read the books but I remember when they first hit the shelves. I vividly recall Scott grabbing one off the stack at Costco to show his mom during a trip to visit her in Alabama. I watched as they opened the book and read some passages followed by the look of shock then a lot of laughter. There was a constant buzz and a whole lot of discussion about how risque the books were. For those of you that know me personally, you can probably picture me blushing as I type this. The success of the series was evident in the fact they created a major motion picture based on it. The real-world reactions the book generated are portrayed in Book Club with these women stepping out of their comfort zones to start living instead of just existing. That’s when we’re introduced to another host of amazing actors – Andy García as Mitchell, Don Johnson as Arthur, Richard Dreyfuss as George and Craig T. Nelson as Bruce. 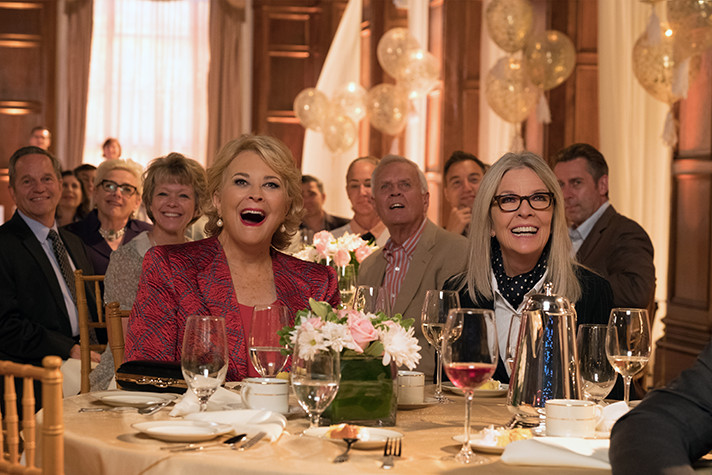 I’m not going to reveal any spoilers, but let me say this: I can’t remember the last time I heard my mom laugh so much. The movie was positively hilarious with many comments and incidents hitting close to home. Clearly it resonated with everyone in the theater because there was continuous uncontrolled laughter! Partway through the movie, I leaned over to mom and thanked her for joining me because it truly brightened my day to experience it with her. My only regret is that I drank too much water and was pretty sure I was going to pee my pants. Thankfully, my mom felt the same way. She summed it up well when she said, “They need more movies like this.” I agree… I would love more movies that my mom and I could enjoy together.

While the concept of Book Club movie revolves around a steamy book, the movie itself is very wholesome and heartwarming. If you’re looking for something to make you laugh, purchase tickets to see this one. You won’t regret it.

Have you read 50 Shades of Grey or participated in a book club?