Warner Bros. Home Entertainment provided me with a free copy of the DVD I reviewed in this post.
The opinions I share are my own.

Kids today aren’t living in the same world as I did when I was their age. Aside from the highly publicized issues of school shootings, bullying and teen suicides, they’re blessed with incredible advancements in technology that make the learning process very different. We were out of town attending Geekway to the West gaming convention this past weekend but each day the girls left the event for several hours to work on homework that had been assigned. Thank goodness they received notifications on their phones so they knew what was expected to be completed and when. Double thanks that they’re responsible enough to recognize that they need to get it done.

Beyond that, the culture within the schools is different. There are still cliques but surprisingly, you don’t have to be a jock to be cool. At our high school, the percentage of students in the band program is unbelievably high. Our school has more students in the marching band than any other school in the state besides Iowa State University. We even have more than the University of Iowa! Homecoming king and queen are often members of the many fine arts programs. Robotics, debate, theater, orchestra and other academic programs are places where you’ll commonly find “cool” kids. Being smart doesn’t carry the same stigma it did when I was growing up. Now, geek is chic and girls can do anything that boys can, including sports like wrestling. I think this shift in school culture is why Warner Bros. Home Entertainment’s new Daphne & Velma Movie resonates so much. These characters have never really had the limelight in the Scooby-Doo franchise, but now they have a movie of their own. It tells the tale of when these BFFs first met face to face and chronicles their first adventure, sans Mystery Machine. The family-friendly movie showcases the girl power in these two smart characters. That makes it a hit in my book. When I had a chance to participate in an exclusive interview opportunity with Sarah Gilman who plays Velma, I had several questions regarding the movie as well as about her. There were a handful of us which meant we each were only allowed to ask one question. I made sure I found the perfect one.

My role model is my mom…
She’s really shaped me into the person I am today.

There were a lot of things asked – from hijinks on the set to how she prepared for the role. Starting with my own question, here are some of my other favorite responses that range from her childhood to her character. I said, “I think it’s awesome that we can see a show like this that has a strong female role model; it’s something that I didn’t necessarily have when I was a child. Who were your favorite female role models when you were younger and who are your favorite female role models now?” Ms. Gilman said, “When I was younger and probably even now, and I know this might come off as kind of a cheesy answer, but I do want to say my mom. My mom was constantly working when I was growing up. I spent a lot of time in after-school so my mom could work and provide for our family and make it possible to live the life we lived. I was very fortunate in that respect… When I was younger, I don’t want to say I resented it a little, but I didn’t really understand and I wanted her to spend more time with me…” At this point, she shifted gears as she rethought her answer. “When I was younger, my role model was probably either Wonder Woman from the Justice League, because I watched Justice League a lot – the cartoon – and I just thought she was always one to tell the truth, she was a leader, she could hold her own against the boys. And so I loved her when I was growing up. …Now here I am at 22 and my role model is my mom. Seeing everything she sacrificed so that me and my sister could have a really good life… everything she did for our family. She’s so smart. She’s amazing with math; she’s amazing with numbers. She’s a hard worker and she tells the truth and I think she’s really shaped me into the person I am today. So my mom is my role model.”

Girls can do anything. Period.

When asked what the one thing she wanted all girls to take away from the film, she replied, “Girls can do anything. Period. Girls can do anything guys can do. Girls can do anything. Period. I think that this is a really good film in that it shows these two strong, young females that aren’t constantly talking about boys… They are proactive and they are fast thinking. They are very real characters that are scared at times then find that inner strength and inner courage to keep moving forward and control their own destiny. I think that’s a really important message to be in the media right now for young females.”

When the question was asked if there was ever a time when she (and her friends) were ‘those meddling kids’, she laughed and responded, “My dad was a detective and so I kind of wanted to follow in his footsteps and solve mysteries and stuff. Nothing really happened in my neighborhood. There weren’t many mysteries. I think the biggest mystery was there was a dog that kept peeing onto a lamppost in front of my neighbor’s yard and they didn’t like it. They were trying to figure out which dog it was. That was like the talk of the town. But my friend and I decided that we would be the detectives, like the new neighborhood watch you could say. We actually put up flyers and cut a hole in the hedge near our house as our private lair, our home base. We would sit in this hedge and figure out what we were going to do. I bought a bunch of spy kits… and there were no mysteries to solve whatsoever but we had all the gear – and the hideout. And then my parents got REALLY mad at me for cutting a hole in our hedge and that kind of ended that phase of my life. I guess I tried to be a meddling kid but that never panned out.” 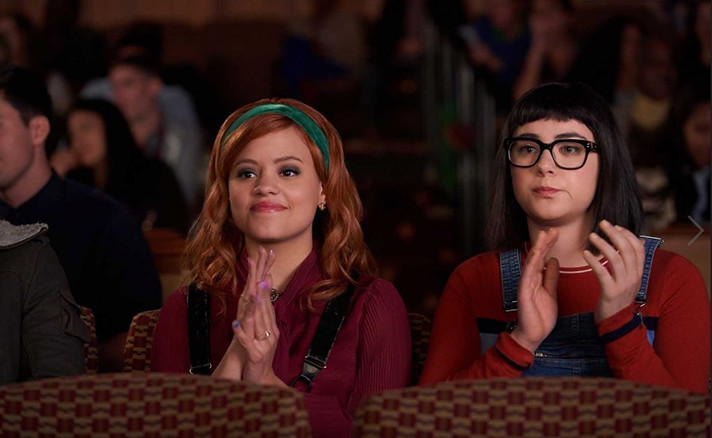 Curious who she relates to more? “Oh, Definitely Velma. I’m a very rational thinker to the point that it’s gotten me in trouble. I think there were times it was just method acting at points for Velma where we just connected so closely on certain traits that it didn’t feel like acting.”

As Ms. Gilman said, girls can do anything. But they need to have role models and Daphne & Velma are another opportunity for girls to see they can do whatever they want. The movie is set in the same style as a traditional Scooby-Doo cartoon, but modernized with a can-do girl-power cast. If you are a fan of Scooby-Doo and want to introduce these strong female role models to your kids, pick up a copy of the Daphne & Velma movie from Amazon for under $18! Check out the decryptor and soundboard then enter to win a copy!

Help Daphne & Velma solve their latest case by helping them decrypt the footage! Dial the knob and meters to just the right position to unlock the footage and move to the next challenge. Trigger fun & spooky sounds right from the movie in this fun soundboard.

25 thoughts on “The Girl Power of the Scooby-Doo Gang: Daphne & Velma Movie”