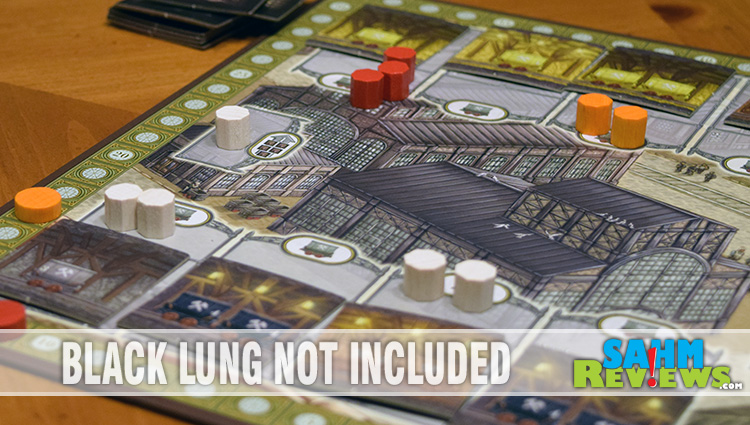 At what point should one consider themselves obsessed? Is it when you can’t get something out of your head? When your dreams have been taken over? For me it is when I start trying to perfect something that has a slight imperfection and am not satisfied until I make it right (in my mind at least). To date everything we’ve played from R&R Games has been as close to perfect as a reasonable person can want. Notice I said “reasonable”. No one has ever called me that before…

We got our hands on a copy of Coal Baron a couple months ago and brought it to our weekly board game group, where it seemed to be liked by all that played it. But we were all in agreement, it had one flaw – the money. For those that aren’t in the know, among hobby game enthusiasts paper money is looked down upon. They’d rather have some type of custom coin, gem, chip – anything but paper money. And even worse is when the paper money is not perceived to be high quality. This was definitely the case with Coal Baron – everything about the game was high quality, except for the single-color (black) on green copy paper play money. It made Monopoly money look cool.

Enter my obsession. After two decades in the printing industry I knew why it was done this way and if I were the publisher I would have done no different. But that didn’t mean I had to accept it. My wheels were spinning! But first, I want to show you the game. 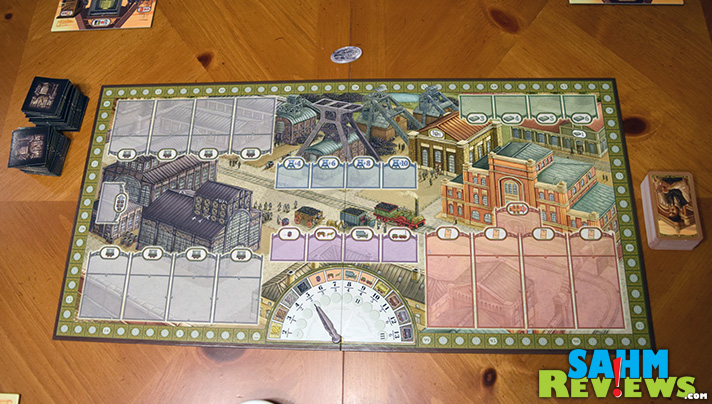 Coal Baron is an easy-to-learn worker placement game set in 19th century Germany, a time when coal was abundant and ripe for the taking! Players own coal mines and work to extract coal, fulfill contracts, buy coal carts, and expand tunnels to win the most victory points. Why Germany? It was originally a German game called Glück Auf before it was brought to our shores after marvelous success overseas. 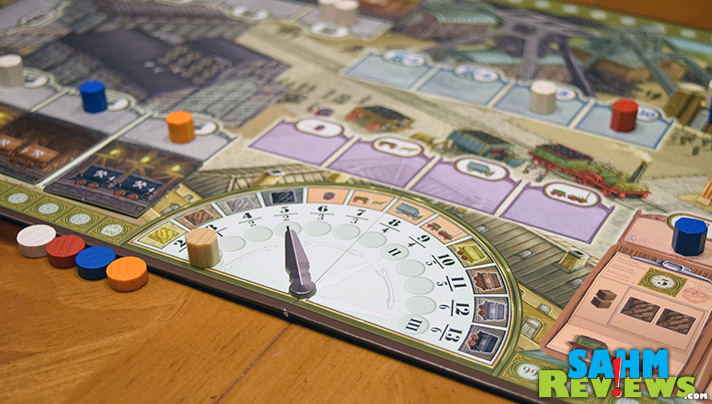 The game is played over three shifts of work, which is kept track of by a time clock on the main board. Each player has a predetermined number of workers to employ, and must choose where to place them on each turn. Maybe you want to have them deliver your loads, or maybe they need to work the elevator. You might need to send them off to negotiate a contract or dig tunnels in your mine. 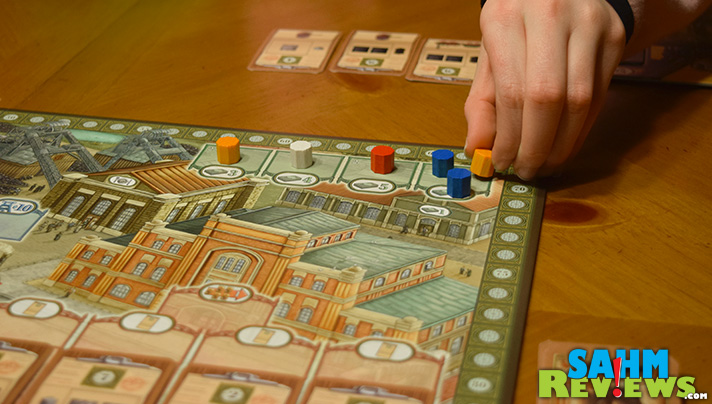 But each spot on the board can only have one player in it at a time. If you’re the first there, you only need to use one worker. If your opponent beats you to the spot, you are forced to use two workers to displace the existing one. Therefore planning your strategy a turn or two in advance is absolutely necessary if you want to use your limited workers efficiently. 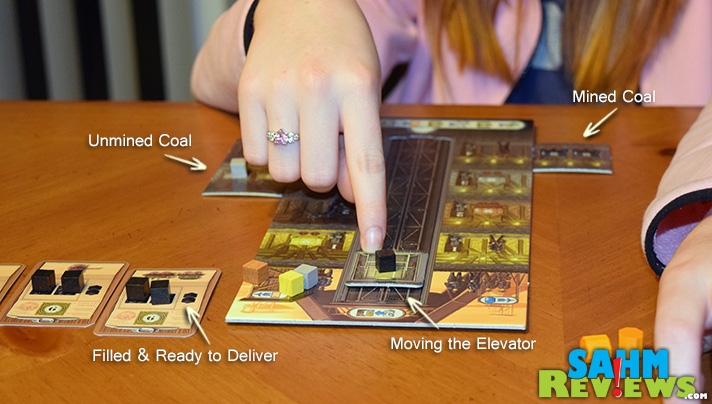 Ultimately this game is about mining coal and fulfilling your contracts by delivering them by rail, truck, horse or wheelbarrow. Each player has their own game board that represents their mine. Here is where I’d like to point out the attention to details (and quality) that is not always seen in games in this price range.

The center block is an elevator that moves up and down, but is just a loose piece of thick cardboard. The makers could have simply printed the background and required you to guide your elevator by hand. Or they could have die-cut the background out and the elevator would have had a shaft that was your table top. But they took it one step further – they included a SECOND elevator shaft printed on slightly thinner cardboard stock that you pop in and allows your elevator to remain perfectly inside the chamber. This is a nice touch that we didn’t want to go unmentioned.

If you’d like to see some real-time gameplay, check out this video. It’s one that we used before we played to get a better grasp of the rules.

Now back to the paper money. As I mentioned before the game is originally from Germany and refers to their currency as “Marks”, even in this U.S. version. I considered picking up some Deutsche Marks off of eBay to replace it, but they haven’t had paper versions of the single Mark (or 2’s) in many years. Having a mixture of coins and paper didn’t satisfy me, so I found some hi-res scans of 1948 East German Deutsche Marks on Wikipedia and threw them into Photoshop. 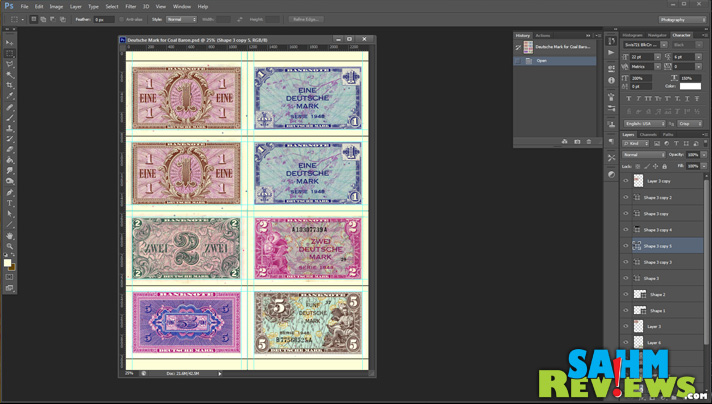 Of course the scans weren’t consistent, so some resizing and aligning was necessary, but after 30 minutes or so of tweaking, they were ready to print out on some card stock I had. 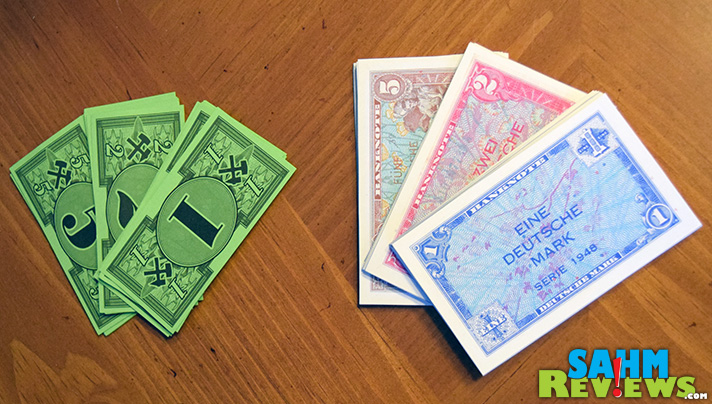 They are printed on both sides with their matching backs and are such a huge upgrade over the included versions on the left. With them being on thicker stock, they are also much easier to pick up off the table! Our first game night using the new currency was a huge hit! 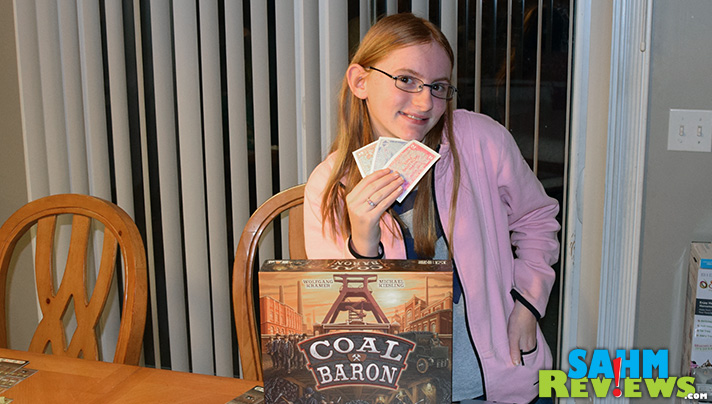 Coal Baron is a little lighter in difficulty than last week’s feature, Village, and can be easily enjoyed by players as young as eight. Because you get to interact with the board (the elevator), it should keep the interest of younger players longer than other similar games.  We thoroughly enjoyed it and have gone back to it more than once when we’re looking for a 60 minute game. Pick up a copy direct from R&R Games or snag one off of Amazon.

R&R Games has a huge number of titles in their library for all ages. Be sure to see what they have coming out next by checking their timelines on Facebook and Twitter. Who knows, you may find YOUR next obsession there!