Continuing with the theme of games that utilize polyominoes, today’s feature is another in the roll-and-write genre, much like this past Wednesday’s Second Chance. If you recall, Second Chance asked all players to fill out a paper grid with randomly-drawn polyominoes. Each player could choose one shape from either of two drawn cards and if they could not make either piece fit, were given a “second chance” by allowing them to draw a third card for themselves and adding it to their grid. The player who most efficiently filled out their paper was awarded the win.

Back in 2015 we were excited to play a brand new game simply called Patchwork. It too used polyominoes and challenged two players to purchase pieces with buttons, the game’s currency. Each turn also cost you time and was printed on the front of each piece. Your personal pawn was moved around the board equal to the time cost and you could earn more buttons whenever your pawn crossed a button on the track. Once everyone reached the end of the track, the player with the most buttons (less open spots) was the winner!

Fast-forward to today and we’re now playing Patchwork Doodle by Lookout Games / Asmodee USA. If it looks or seems similar to Second Chance, there’s a good reason. It was designed by the same person, Uwe Rosenberg, who is known for utilizing polyominoes in many of his small and large game designs! And while we adore Second Chance, if you’re a fan of the original Patchwork, Patchwork Doodle may just be the roll-and-write you’re looking for! 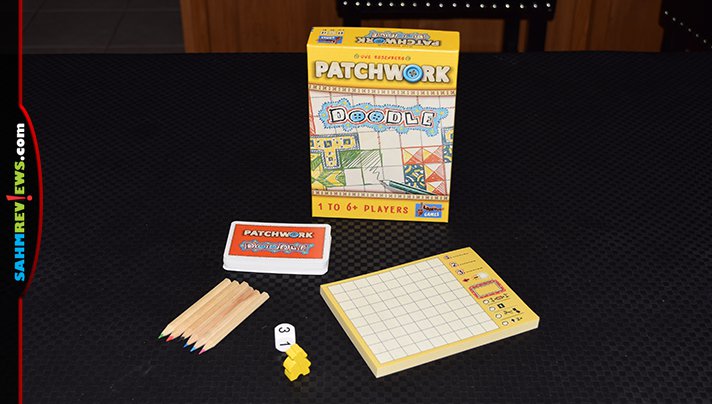 Each player begins the game with a blank sheet and a pencil. Supplies for six players are included, but with the addition of a few more pencils, Patchwork Doodle could technically support an unlimited number of participants. The deck of Patch cards are shuffled and set into the center of the play area. Eight are drawn from the top of the deck and laid in a circle around the pile. The wooden token is set in between any two of the cards and all players receive one random Start card showing a patch that occupies seven squares. 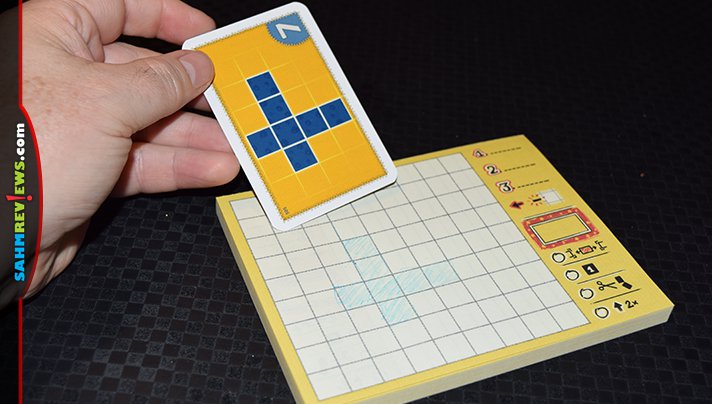 Using the Start card, all players will draw the outline of the shape onto their paper and fill it in. The piece can be rotated and/or flipped and is then shaded in once the outline is completed. The piece may be placed anywhere on the grid, but may not extend off the paper. Once everyone is happy with their starting piece placement, a game of Patchwook Doodle is ready to begin. 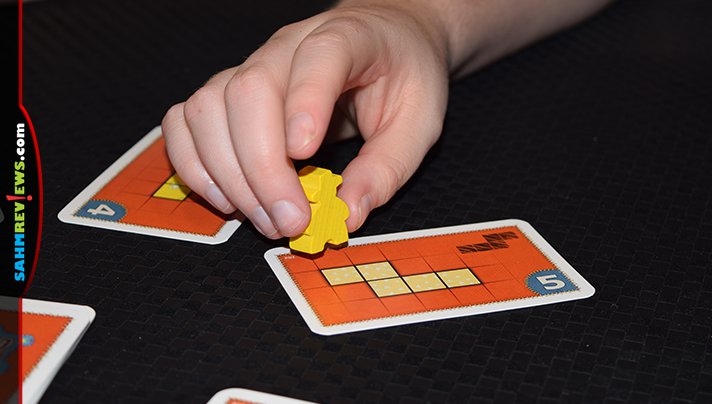 A full game is played over three rounds, each consisting of six turns. After each round there will be scoring (more on that in a second) and some final scoring will occur at the end of the game. At the start of each turn the included custom die is rolled. The result (1, 2 or 3) dictates how many spaces the pawn will be moved clockwise around the circle. The card that the pawn ends on is the patch piece that the players may draw onto their grid. The card is removed from the circle and the pawn left on the empty space. Drawing is optional and players may pass if they don’t want it or it doesn’t fit. 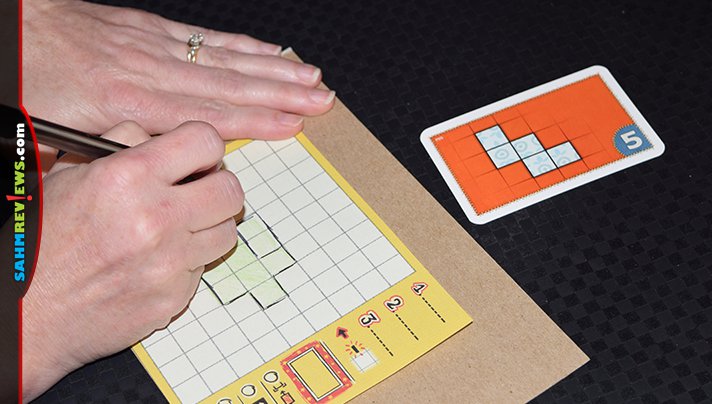 After six turns, when there are two cards left in the circle, the round ends and intermediate scoring commences. You are rewarded for having pieces clustered together, as if you were sewing a quilt from top to bottom (or bottom to top). Look for the largest completely-filled rectangle on your grid. Score for the largest square (width x height) and add a point for each additional row or column adjacent that fills up your largest rectangle. Your score is recorded on your sheet and you will earn additional points in this manner at the end of each round. Set the remaining two cards in the circle next to each other, put the pawn right before them in clockwise order and deal out additional cards until the circle of eight is full. The next round is ready to begin! 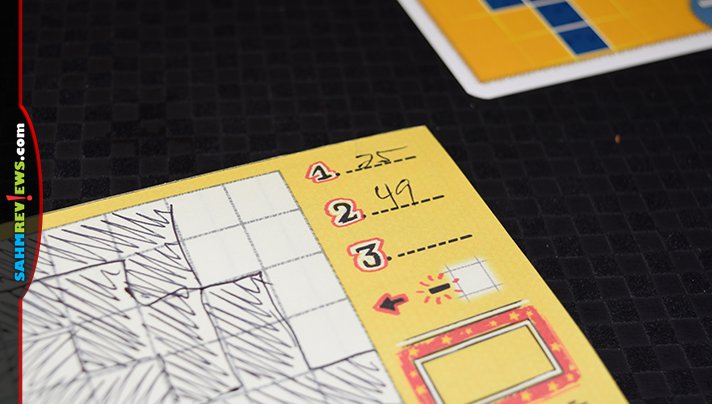 Towards then end of the third round when there are only three cards left, instead of rolling the die one more time, all players may choose which (if any) of the three leftover pieces they would like to draw. Third round intermediate scoring is performed again before counting up the number of empty spaces on your board as a penalty. The person with the highest overall total from all three rounds, less their penalty, is the winner of Patchwork Doodle! 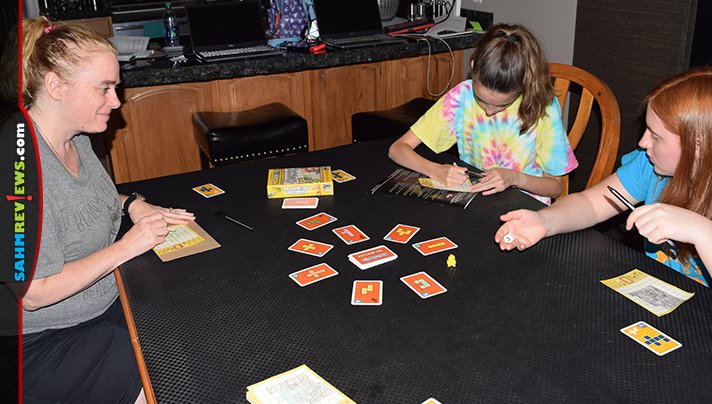 During the game each player has a few one-time use “powers” they may activate. One of them allows you to draw the patch on the left or right of the one denoted by the token. Another allows you to fill in a single space anywhere on your board. A third lets you “cut” the current piece and draw one of the resulting pieces instead of the full polyomino. The last power allows you to repeat any of the above actions one time! 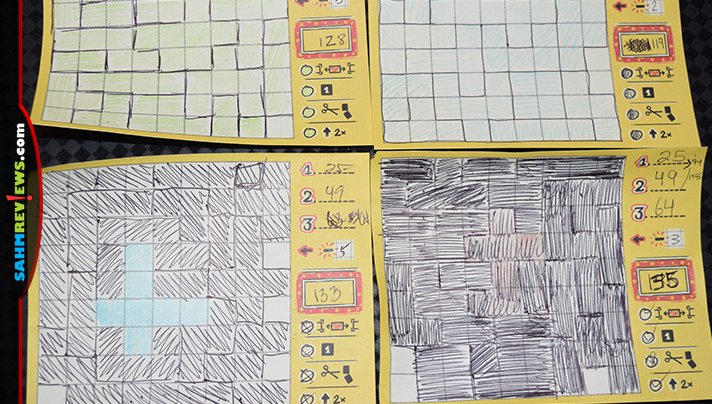 Because of the scoring after each round, Patchwork Doodle is more than just a “let’s see who can fill their grid the best”. Even though you do get a penalty for not completing the puzzle, it pales in comparison to the number of points you’ll earn by making large rectangles as the game progresses. A nice twist to the genre and something that isn’t seen in the other Tetris-styled games we’ve played.

Another fantastic thing about the new trend of roll-and-write games is the low price point! Patchwork Doodle can be found for under $20 on Amazon or at your local game store! If you’re not familiar with Lookout Games, be sure to check out their website. You’re sure to recognize a number of their titles that have been brought stateside by companies like Asmodee USA and more! If you want to know more about what they’re working on next, be sure to follow them on Facebook or Twitter!

Have you ever sewn your own quilt?