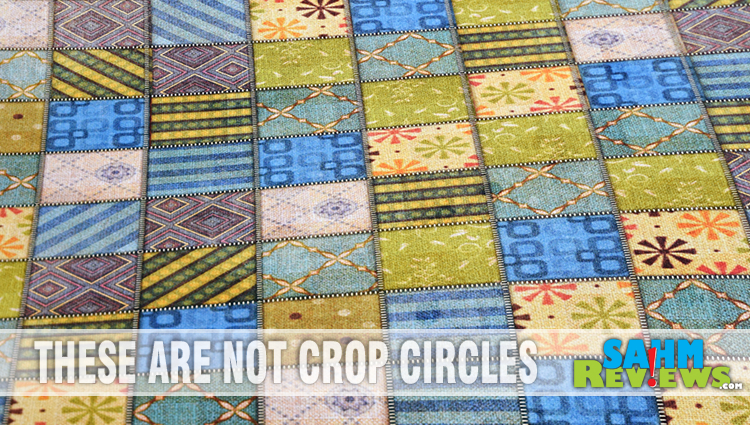 “This is my current favorite 2-player game.” That’s what I was told when I asked my friend Doug about a game he was playing at our local game store. Patchwork didn’t seem to be the normal theme he would enjoy, but there he was, turning patches of “cloth” trying to construct the perfect quilt – or at least one better than his opponent (his wife).

When we picked up a copy at Gen Con this Summer, I knew it was going to be a good one. I respect Doug’s opinions on games because he has rarely been wrong. He has a keen eye for titles that not only he’ll like, but ones that he knows his friends will also enjoy. He’s also a walking encyclopedia about game designers and publishers, and the fact that Patchwork was created by one of his favorites (Uwe Rosenberg) didn’t hurt either. You probably know Mayfair Games from their hugely-popular Settlers of Catan series, but they also have 100’s of other titles in their line. This past January we showed you the very cute Hot Tin Roof and even brought you an interview with Alex Yaeger from the 2013 Chicago Toy & Game Fair. 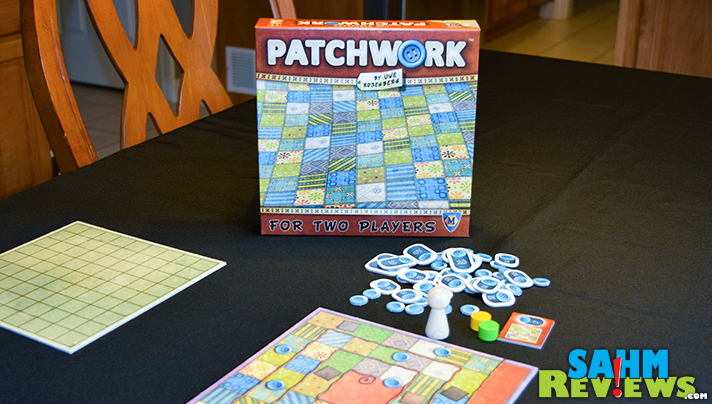 By now you’re asking, “What does quilt-making have to do with games?” That’s the premise of Patchwork – you’re methodically creating your own quilt using scraps of material, trying to efficiently position them while still earning enough revenue (in the form of buttons) to purchase more pieces. 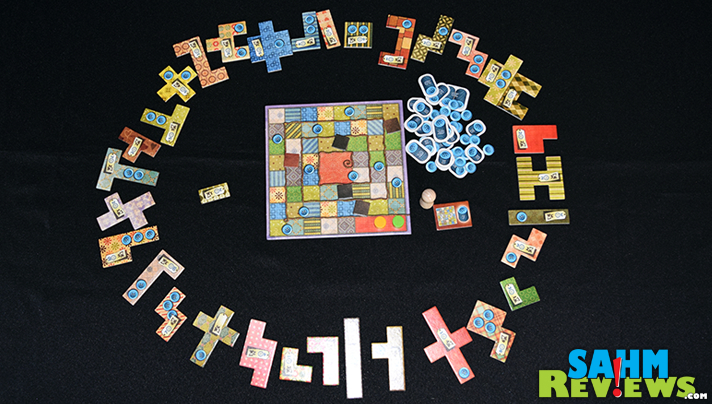 The game includes 33 patches of material (Tetris-style) that are laid out in a circle around the playing board. This ring is your store from where you will eventually purchase all of that parts you need for your quilt.

There is a neutral token or pawn that moves around the circle, making only the next three pieces (clockwise) available for purchase. On your turn you may purchase one of those three and move the pawn into the resulting open space. The next three pieces will then be available to your opponent. It moves around the circle for the entire game, so a passed piece isn’t lost, just delayed. 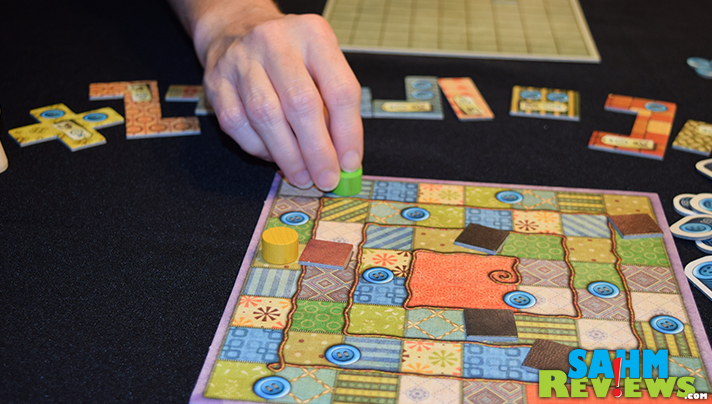 Each piece has an associated cost in both buttons (the game’s currency) and in time. Pay buttons from your reserve and move your pawn the corresponding number of spaces (time) around the board.

Then place your newly-received piece on your personal quilt board. You have to plan ahead because once in position, you cannot move the piece to another spot.

Inevitably you will end up with unfilled spots in your quilt that need to be patched. Being the first to cross the special “Leather Patch” spots on the board earns you coveted single-square pieces used for filling in holes in your quilt.

Crossing a button on the board gives you a payout – one button for every button in your current quilt. As the game progresses you will earn more and more each payout, allowing you to purchase more expensive pieces. 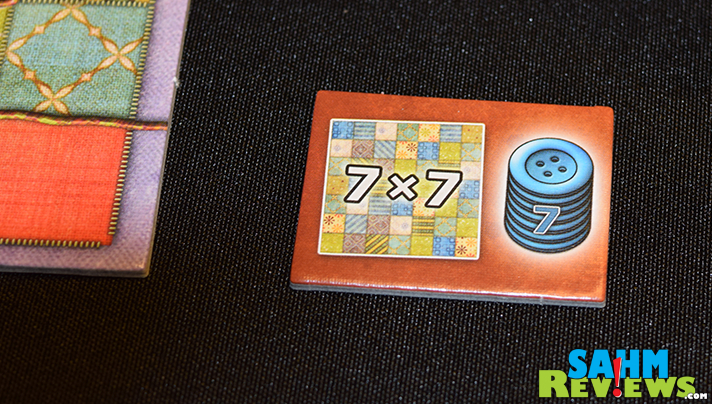 There is also a bonus for the first player to complete a 7 x 7 quilt which awards them 7 additional points at game’s end. This might be just enough to swing the game to your side, so paying attention to how you lay your tiles is paramount if you want to earn this bonus.

But I think my favorite mechanic of the game is how turns are taken. It is not simply a back-and-forth process, but one that is decided by who is farthest behind on the track. When you’re behind you have a choice – purchase a tile (as highlighted above) or catch up to the other player and receive an equal number of buttons for however many spaces they are ahead. If you decide to purchase, but are still behind after paying the time fee on the tile, you get to go again! Planning ahead and purchasing smaller pieces will allow you to have multiple turns in a row, potentially making the pawn bypass a key piece the other person needs for their quilt! 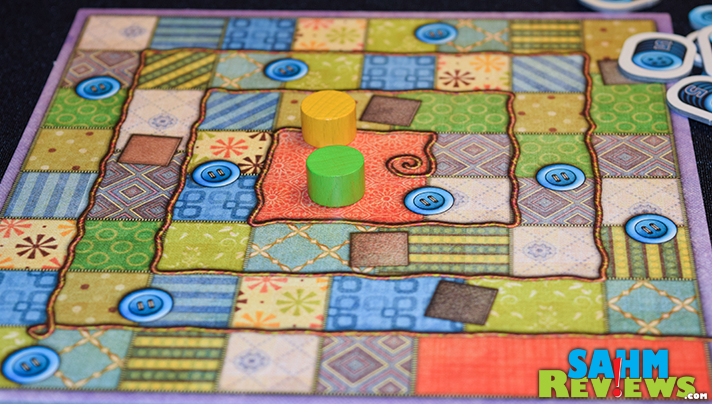 Once everyone has reached the end, one final button payout is given and victory is determined by the player with the most buttons. Don’t forget to subtract points for unfilled spots in your quilt (trust me, there will be some)!

I never thought I’d find myself gushing over a game that is based upon an “old-person hobby”, but here I am. The quilting theme is perfectly integrated with the mechanics and the inclusion of odd-shaped patches of material adds a puzzle-like aspect to an otherwise straightforward game.

Rated for ages 8+, Patchwork can easily be taught to kids as young as 5 or 6. Expect each game to last about 30 minutes – perfect for those with shorter attention spans, but long enough that you’ll need to have a strategy in place each turn. If you have a friend or family member that is into textile arts, this would be an amazing gift to get them into the world of hobby games!

Find your copy on Amazon or request a copy from your local game store. MSRP is $25, a perfect Christmas gift price point! And I I alluded to above, Mayfair Games has 100’s of other titles in their library. Be sure to follow them on Facebook and Twitter to see what they’re working on next. And if you’re a Star Trek fan, wait until you see what they’ve just released! We hope to be able to tell you about it soon!