As we have gotten more and more involved (addicted) to board games over the past few years, we’ve seen pretty much every theme make it to the table at some time or another. Across the various types of games, we’ve encountered space, robots, zombies, pirates, dragons, history, war, construction, frogs, fish… The overwhelming number of games are topics targeted toward men.

Not that I’m complaining. Most people are perfectly happy playing any kind of theme as long as the game mechanism itself is to their liking. Games like Patchwork are well received by gamers because they’re enjoyable and the fact the theme is a bit feminine makes no difference at all. 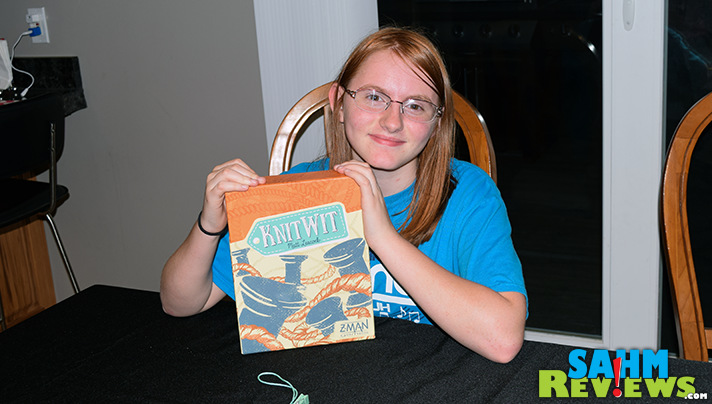 Well, we stumbled across another one that carries a feminine title, but is filled with creativity: Knit Wit by Z-Man Games. Other than thematic components, the game has nothing to do with sewing or knitting or even terminology surrounding crafts. It’s basically a word game where being witty is how you win. 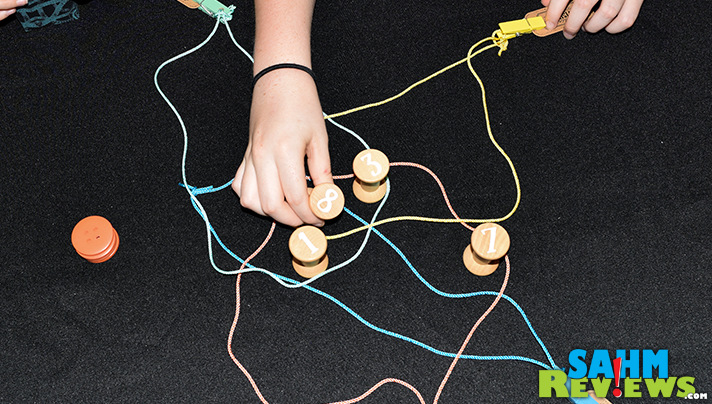 Knit Wit plays up 2-8 people and lasts a whopping 15 minutes, if that. The wittier the crowd, the faster the game will move. It includes a string, clothespin, pencil and spool for each player. It also includes four bonus buttons, 114 word tags and answer sheets. I know, it sure sounds like it’s craftsy, but I promise you that it isn’t. The most intricate and difficult part of the process is attaching the clothespin to the loop. And for the craft-challenged, it only needs to be done once then can be placed back into the box in that assembled format.

At the beginning of the game, each player takes one spool, loop/clothespin combo, pencil and scoring sheet. The bonus buttons and word tags are placed within reach of all players then starting with the first player, each person takes turns adding their loop and spool to the center of the table. Each game is divided into three parts: Knit, Answer and Score. 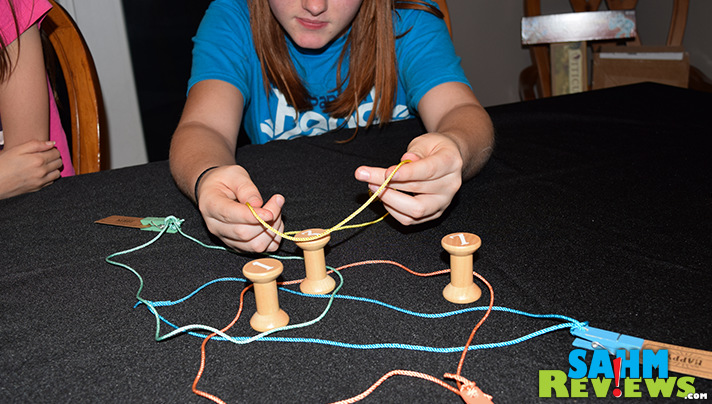 If you’re wondering if you need to know how to knit, the answer is no. The first player places their loop on the table then randomly selects a word card and inserts it into the clothespin for everyone to see. The player then places their spool in any unoccupied region. The second player (and all subsequent players) place their loop around one spool, overlapping the other loops already on the board. They proceed to add a word card to their clothespin and complete their step by placing their spool in any cross section of the web that doesn’t already contain a spool. 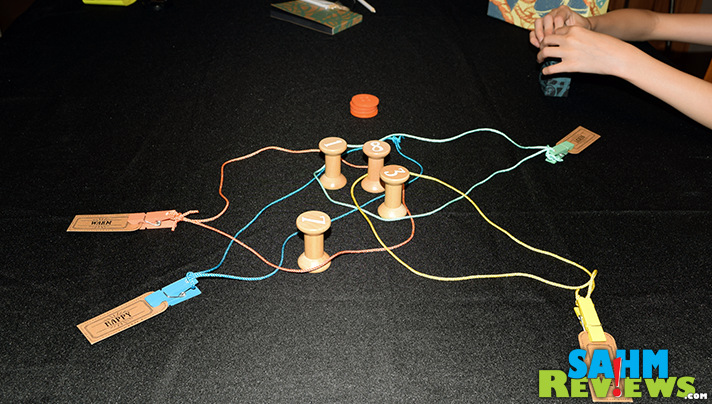 Once every player has completed this task, things get tricky. Each spool is surrounded by at least one loop and its color-coded, clothespin-wielding word. In most cases, more than one word will be associated with a spool and often one word will be used on multiple spools. As an example, spool number 7 is only inside the orange loop for the word ‘warm” but the number 8 spool is inside all four loops. Number 7 would be worth one point but spool 8 would be worth four. Was that confusing? Maybe this video will help:

When the first player says “Go”, everyone needs to come up with a word or phrase associated with the words connected to each spool. Write the witty response on the answer sheet next to the number corresponding spool. The first person to complete all the answers (or give up on them) grabs the first button and may not submit any more answers. When the last button has been grabbed, everyone stops writing. 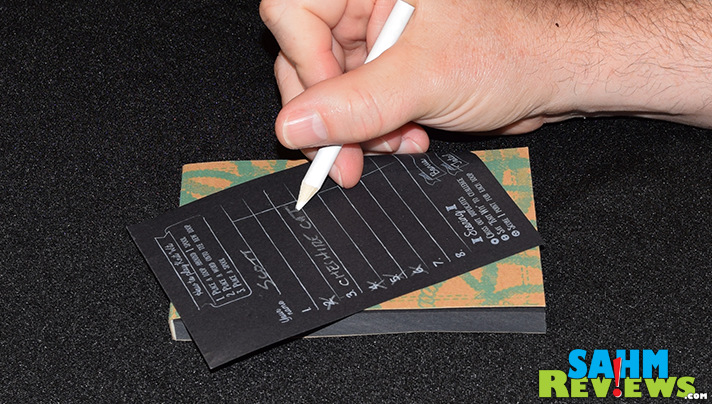 Then comes the time when you discover who in your group is the wittiest! Starting with the lowest numbered spool, determine what words are associated with it then go around the table providing answers. Unlike Apples to Apples where the “best” one wins, in Knit Wit, each unique answer (that meets the requirements of all the word cards) scores. A point is awarded for each word card required for a spool. After all spools answers have been awarded, players tally their score, add the bonus for the button they grabbed and come up with a total. Player with the highest total wins!

The game is quick and requires a keen sense… wait for it… wit. Other than the home economics inspired title, we didn’t feel the game was intended to exclude anyone. Visit Z-Man Games on Twitter and Facebook to learn more about Knit Wit and their other games, including Pandemic The Cure which we featured a few months back. If this game sounds like it will have you in stitches and you want to weave it into your game nights, you can pick up a copy of Knit Wit on Amazon for under $30 or direct from the Z-Man Games website.

Are you quick witted enough to claim the title of Knit Wit or would you rather be knitting?

4 thoughts on “When Witty Men Learn to Knit”