Each week at our local board game meet-up, we have the chance to browse through a lot of different games. The regulars that attend each bring a bag full of games for other attendees to play. It’s like a mobile board game library with a revolving door. Never the same games available each week.

That’s one of the ways members of the group are introduced to new games. It’s a try-it-before-you-buy-it system. If someone plays a new game that they enjoy, they sometimes go out and purchase it for their own collection. We’re the same way. Despite having a huge collection of games purchased at thrift stores and ones we have received for review, we also regularly purchase ones that we thoroughly enjoy. Yes, we have an addiction.

One thing we have learned is that you cannot judge a book by its cover nor a game by its title or box. As an example, Igor by R&R Games was a huge hit with the crowd despite the association to an animated movie. We recently added another sleeper to that list: Let Them Eat Shrimp.

Some of the regulars were more than anxious to try it out, but there were a few others who thought the age reference of 6+ meant it would be a bit juvenile for their taste. They joked during the start-up, but soon it was apparent that they were taking it quite seriously. Aside from the instructions being written in a way that a 6 year old can understand, the game offers both basic and advanced game play. 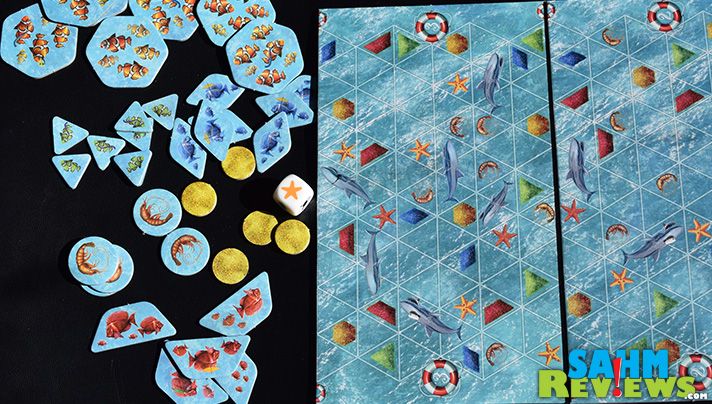 Let Them Eat Shrimp is a strategy game where victory points are earned by placing your available tiles on the board to capture the different fish displayed. The game consists of a two-sided board (for varying difficulty), four different sizes of fish pieces, shrimp, eggs, a die and a pawn (advanced level).

The board is covered with four types of fish (designated by shape/color), shrimp, starfish and sharks. There are different rules for the basic and advanced game but the general premise of both games is the same. Place your token, collect the corresponding pieces that you covered and roll the die for bonuses (starfish) and penalties (sharks).

Players lay their existing fish pieces next to one already on the board which is where strategy comes into play. It is important to plan your placement in a way that doesn’t benefit your competitors. Very much like chess, you need to evaluate several scenarios before making your move. Regardless of the shape/color of the piece you choose to play, your next step is determined by what it covers. If it covers a blue diamond, you collect a blue diamond fish. If it covers a shark, you roll the die. If it covers both, you do both. 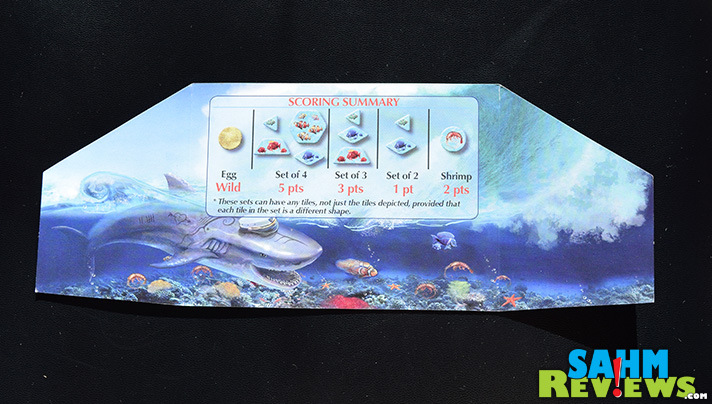 The game seats 2-6 players and is recommended for ages 6+. Between the basic and advanced game options, it offers a fast play, great as a family game, a filler in between more serious gaming sessions or an advanced tile-placement strategy game that can hold its own while swimming with the sharks.

Let Them Eat Shrimp is available on Amazon for $35 or purchase direct from Doctor Finns and receive a free expansion pack. See what other medicine Doctor Finns has in the works by following them on Facebook or Twitter.