The life of a researcher can be a lonely one. Hours upon hours of experiments, both successful and failures. Not to mention the unglamorous nature of the career. Lots of hours working in solitude in pursuit of that one discovery that might bring fame (and a little fortune). This isn’t the life I would choose.

But what if you could pretend to be one of those scientists just for a couple hours? And you could share the experience with three other friends! That’s the scenario behind AquaSphere, a brand new title from Tasty Minstrel Games.

AquaSphere is the product of another successful Kickstarter campaign last year and is beginning to hit retail shelves as we speak. Designed by game creator superstar Stefan Feld, it attempts to simulate the activities of researchers in an imaginary underwater bio-dome.

In the gaming world, this type of game is best described as a “role-selection” game. On your turn you will select which role your character will take by choosing one from a pool of available options. In AquaSphere, this selection process is taken one step further. While you control two researchers (one in the dome, one in a separate lab), it is your robots that do all the work. So, instead of telling your scientists what to do, you have them program individual robots who then carry out the task in a later stage. 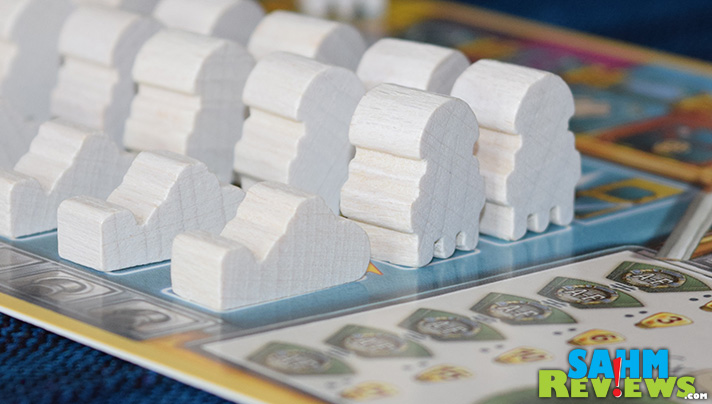 You may only have two programmed robots at a time in your facility, but can have as many deployed robots as the board will allow. Thus your decision on your turn is very simple. Either program a robot, deploy one to do its task or pass.

The game is played over the course of only four rounds, with each round lasting anywhere from 4-6 turns each depending on the selections you make. The first player to run out of actions passes, becoming the first player for the next round.

So what are the things your robots can do? They can program other robots, clean octopods off the exterior of the AquaSphere, grab expansions to your lab, collect more time (the game’s currency), collect crystals (which is why you’re down here in the first place) and more.

Each task leads your scientists down a path that they are wise to continue. But this is a game typical of many of other Feld titles in which you just cannot do everything if you want to win the game. Choose a specialization (deploying submarines for example) and focus on maximizing your points in that category. 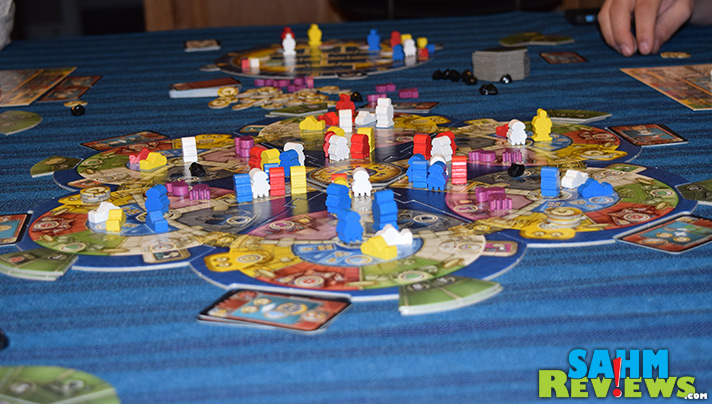 Once the game gets into its third round, the board starts filling up. And while to a bystander it may look confusing, to you it makes perfect sense. For me that was the elegance of the game – finding structure in all of that chaos. And when our friends would watch over our shoulders to try to figure it out from afar, it drew them in wanting to know more. It is no exaggeration that AquaSphere has been requested every week at our various gaming gatherings and has hit the table at least a half-dozen times in the short time we have owned it.

I’m sure to you it also looks quite confusing and maybe too complicated. Trust me, this isn’t so. It does take at least one play to really get comfortable with what’s going on, especially if you have never played this type of game previously.

If you’d like to take a look at it being played, spend a few minutes watching this video. While the included rulebook is very good, it is never a substitute for watching the game in action.

If you’ve been looking for a game to introduce your family to this genre of modern Euro-style strategy games, AquaSphere is a fantastic option. It possesses a theme light enough to not turn off those that are tired or fearful of zombies and werewolves, and the inclusion of cute octopods and robots will also delight your younger family members. We have played this game with children as young as 8 years old with great success. Younger kids could enjoy it, but will probably get lost in the strategy.

Like every single game we’ve played from Tasty Minstrel Games, the components are top-notch and the design is colorful and engaging. We’re tempted to purchase a bag of small googly eyes for the robots to give them some additional character. If we do go that route, we’ll be sure to report back the results of our crafting!

You won’t find this game at your local department store, but check with your friendly local game store or find one on Amazon for around $40. AquaSphere is up for a number of industry awards from various organizations, so get your copy now and don’t wait for the inevitable rush once the winners are announced! As always, check out TMG’s Facebook and Twitter timelines for promotions and new releases!

24 thoughts on “AquaSphere Board Game Overview”