We’ve all seen the beautiful photos of Bora Bora from the air as well as the amazing luxury resorts on this island oasis. Part of French Polynesia, Bora Bora has a permanent population of well under 10,000 people. Maybe someday it’ll have at least one more!

I guess the next best thing is to imagine I’m sunning myself on the white sands while playing a copy of Ravensburger’s best-selling strategy game by the same name. My first introduction to a game by designer Stefan Feld was when we tried out AquaSphere this past Spring. It is still a favorite of mine, even if it looks confusing to an outsider. Bora Bora follows a similar mechanic in that you have a wide range of choices you can make with your pieces, but cannot even come close to doing them all. 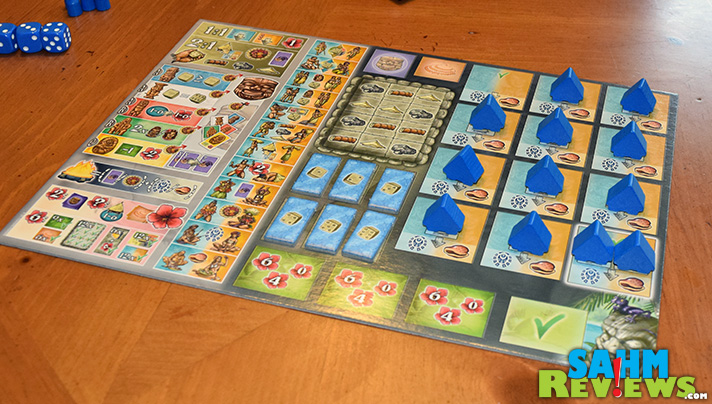 Each player receives their own player board that helps them keep track of various objectives and provides a ‘cheat sheet’ (on the left) of what the various icons represent. Obviously the object of the game is to score the most points, but ‘how’ you accomplish this is completely up to you. 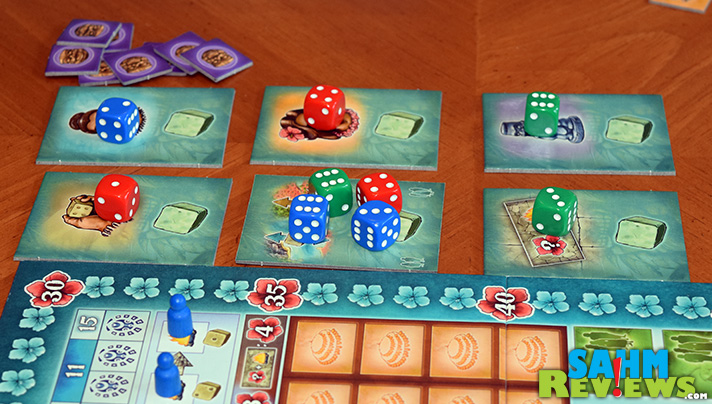 But as I mentioned previously, you cannot do everything. Your path will be somewhat dictated by what you roll with your dice AND what path the other players choose. Each person rolls three dice at the beginning of the round. With each of those dice, you take turns placing them on one of the six action cards. Here’s the catch – you can only put your dice on an action if the value is LOWER than all of the other dice on it already. In the above example, the “red” player decided to be aggressive and play a 1 die on the action that allows people to gather resources/get points/etc., preventing anyone else from playing there at all during that round. BUT, they also limited themselves to only doing one action on that particular card (it allowed you to spend the pips as currency to do multiple actions). So while they prevented others from doing any at all, they themselves only were able to minimally take advantage of it also.

The other 5 cards represent the following actions in clockwise order from the upper left – hire a male worker, hire a female worker, place a priest in the temple, build in your resource area or expand your huts on the island (below). 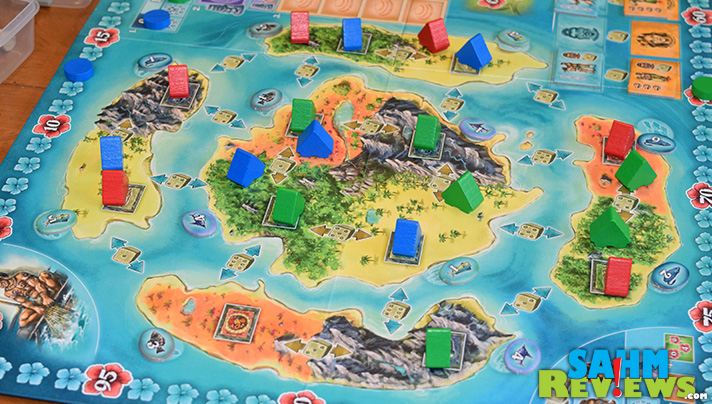 Expanding your presence in Bora Bora is a staple of playing the game. Each player begins with one pre-built and when you choose the appropriate action, you can expand to an adjacent section. In order to do so, you also must have rolled a die with at least as high of a number required to expand. If you look at the green hut at the bottom of the photo, they need at least a three to expand to the west. Each section of the island also has fish swimming offshore that are worth points at the end of the game. The last person to expand to a region controls the area (and gets the points), so being first to build won’t necessarily win you the points.

Along the way there are various objectives that also award you points upon successful completion. These will be different for everyone and may be as simple as buying four pieces of jewelry, or as difficult as having a structure on every island of Bora Bora. 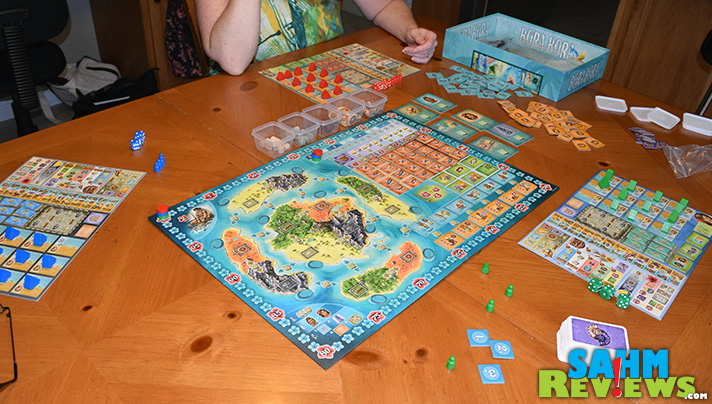 Instead of building, you might take the path of hiring workers to help you with additional actions. First you must clear the way on your board for them to ‘live’ by either building or moving your buildings to a remote part of your estate. Or maybe you’ll just earn money (clams) and buy sets of jewelry. Maybe your team wants to just enter the priesthood and earn points at the end of each round.

And to complicate your plan, each round you can earn tattoos – with the number earned determining player order for the next round! So many variables, so many options to block each other! You will not be able to plan ahead more than a round or so! 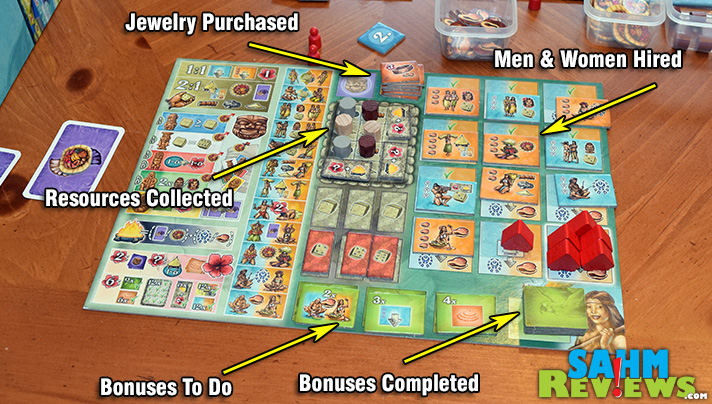 Six rounds is all you get to accomplish everything you think you can. But with your decision-making process consistently being interrupted by your opponent’s actions, expect each round to last a good 15 minutes – bring the total game time to just over 90 minutes.

After the sixth round is scored, final game scoring occurs where you get bonuses for completely filling parts of your board. You also get one last chance to complete any bonuses you didn’t turn in previously. It was this final scoring that I found myself going from a commanding lead back to second place once everyone’s points were tallied. I guess additional vists to Bora Bora will be in my future! 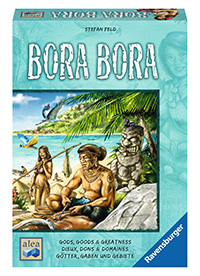 Bora Bora is accurately rated for ages 12+ and an expected game time of 60-120 minutes. It isn’t difficult to learn, but with the need to plan ahead a couple moves (and figure the math involved to find the best move), younger players probably wouldn’t enjoy it. However, for your teenager or big kid in the house, Bora Bora is another great title to own that sharpens both your planning strategy and complicated math skills.

You can find Bora Bora at your local hobby store or on Amazon for usually under $30. Considering the amount of time per game and the instant desire to play it more to try and master it, it is a much better value than the titles you’ll find at your local big-box retailer. Check out Ravensburger’s website for a number of other family-friendly titles (and puzzles – of which they’ve been famous for years!). Their Facebook and Twitter timelines are always full of great photos and announcements so make sure you follow them before the holiday season so you don’t miss out on new product debuts!

19 thoughts on “My Wonderful Trip to Bora Bora”