Despite not having a lot of time to sit and watch TV, Scott and I tend to have an awful long list of shows we love. A one-two punch with Netflix and the DVR has been our saving grace. We’ll record seasons of what we want to watch then catch up on all of them when the shows go on hiatus. It’s bittersweet when a show that we think is great gets cancelled, but at least is frees up time for us to watch something new.

Just last week, Season 2 of Colony starring Josh Holloway (from Lost) and Sarah Wayne Callies (from Prison Break). When we started watching it last January, we were surprised at how much we craved the show. When the season ended, we anxiously awaited the announcement of a green light for season 2. We spent months talking about it and encouraged friends to catch up before season 2 aired.

Then last summer while attending Gen Con, I spotted Colony at the Bezier Games booth. You can imagine the first thing that came to mind was the show, but Ted Alspach gave me a quick game overview and the similarity ends at the name. 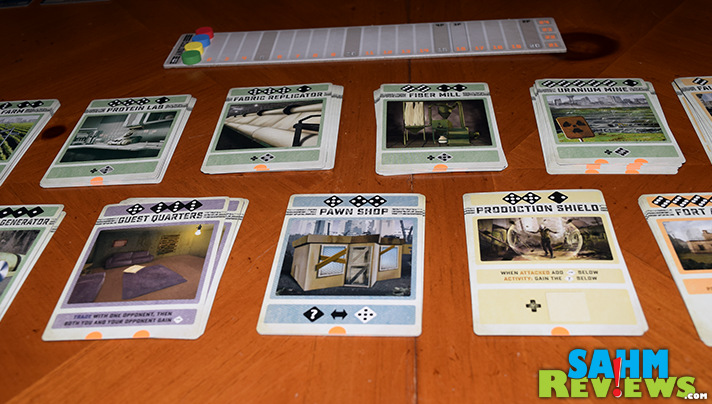 There are many familiar aspects to this game so it wasn’t hard for us to hit the ground running once we opened the box at the game table. It’s card drafting similar to Dominion, Star Realms and Flip City, but it has the added component of dice as the form of currency similar to Machi Koro or Bora Bora. While Dominion, Star Realms and Flip City focus on creating and reusing a deck that is shuffled at random, Colony allows players to utilize the resources they have focused their efforts on building. Best described as an engine building game, players are constructing farms, quarters, posts, generators, banks and other things to create a colony in a post-nanopocalypse, limited-resource Earth. Points are earned for building progress and the first player to meet the designated point target (determined by the number of players) wins.

Each player begins with the same core structures including a warehouse, supply exchange, construction and upgrade. You can’t upgrade unless you build. You can’t build unless you have resources. So let’s start there. How do you get resources?! You spend your game scavenging, that’s how. At the beginning of each turn, a player grabs 3 stable resources (solid colored dice) from the pool and rolls them. The active player cherry-picks their favorite resource from the results then leaves the remaining resources for the other players, starting with the player on their immediate left. This dice drafting process ensures you’ll always be ‘finding’ new resources, even when it isn’t your turn! Next, players tap their colony’s output for additional resources. Between the scavenging, the colony’s output and what a player has in their warehouse, they can find ways to improve their colony! 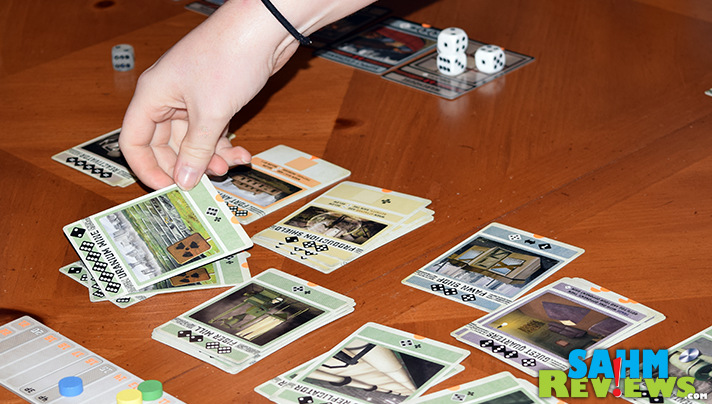 On each turn, players can utilize their resources and the bonuses provided by already existing buildings to expand their colony. Maybe that means upgrading the warehouse, possibly planting a farm, building a fiber mill or maybe even investing in a fallout shelter. The cost of each project is listed on the top of each card and the output potential is shown on the bottom. Being able to create combos that pay off each turn is key to being successful. 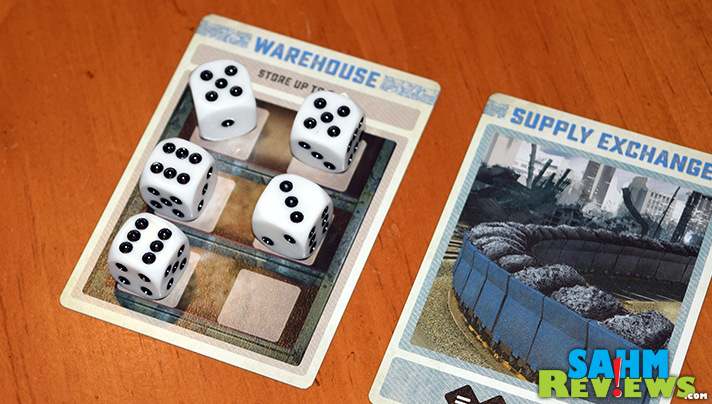 But despite our best efforts, some resources are more volatile. They cannot be transported or stored so while unused stable resources can be stored in a warehouse, if a player doesn’t use the unstable ones right away, they’re returned to the supply.

There are multiple paths to creating colonies and the potential buildings and features vary from game to game. The best method for doing this is by using the free Colony setup app. It randomizes the available cards being used to ensure each game is different from the last.

The options available will determine the intensity and conflict level of the game so players can decide ahead of time to exclude cards that take the game in an unintended direction. As an example, cards such as Swindler and Pirate are more aggressive against opponents. The app allows players to adjust the probability of a card being part of the starting setup.

The game is very straightforward and can be played by younger kids with a bit of explanation of the bonuses on each of the cards at the beginning of each game. A non-conflict game can be finished well under the estimated 60 minutes referenced on the box and the replayability is high since the game changes every time!

Roll yourself over to the Bezier Games website to see the other games they offer and check out their Twitter and Facebook channels for announcements about new releases.

Have you played Colony or watched the unrelated TV series?