For nearly 10 years SahmReviews.com has written about over 1,000 products and services we use on a regular basis. A number of years ago, as our girls got older and graduated from Chutes and Ladders to more advanced games, we began exploring what was on the market besides what you see on the shelves of your local Walmart. What we discovered was a whole world of board and card games unlike anything any of us had grown up with.

We’ve told you about our love for abstract games, dexterity games and even multi-hour long Euro-styled titles. Rarely do we find a game we don’t enjoy (it does happen though), and we’ve pretty much covered every genre of board game out there. But there is one type that we haven’t had the opportunity to showcase until now. And once you see what it is all about, you’ll wonder why you don’t have something like this in your collection already. 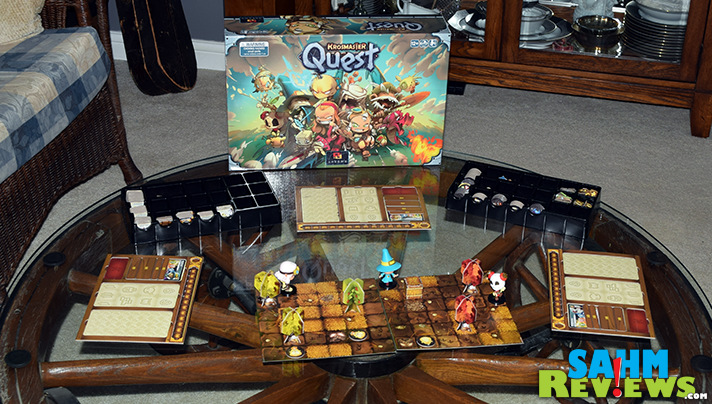 Krosmaster Quest by Cool Mini or Not falls into a category typically referred to as a “Dungeon Crawler”. When you hear that term I’m sure your mind immediately has thoughts of the tabletop classic, Dungeons & Dragons. And for good reason – without the long term success of role playing games such as D&D, Pathfinder and others, these scaled-down board game RPG’s probably would have never seen the light of day. 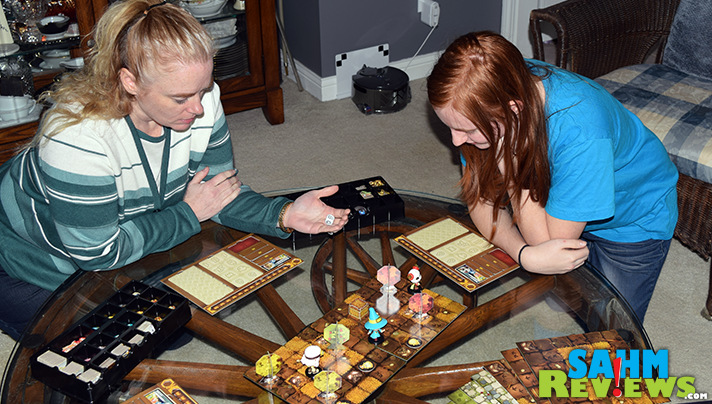 Imagine being able to open a box and have absolutely everything you need for you and up to four of your friends to spend an afternoon slaying monsters and gathering treasure. That’s exactly what you’ll find in Krosmaster Quest, right down to the included prepainted chibi-styled miniatures. I think we all have that one friend that loves to play the antagonist, so the requirement that one person play as the “Dungeon Master” is a perfect task for them. This makes Krosmaster Quest a one-vs-many campaign!

And thus my dilemma. Krosmaster Quest is a campaign-based game. This means every game layout is different and has its own unique story line. I’m hesitant to talk to much about the actual game play or I might just ruin the experience for you when you get your own copy. So instead of trying to explain the game from start to finish, let me show you how much value you’re getting in the oversized box. 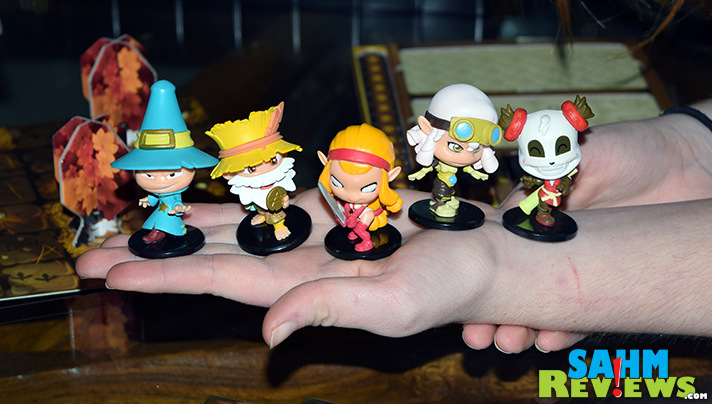 The first things you’ll notice are the previously-mentioned player figures, already painted and ready to play with out of the box. Krosmaster Quest includes five player minis along with two ‘royal’ versions that are controlled by the dungeon master. 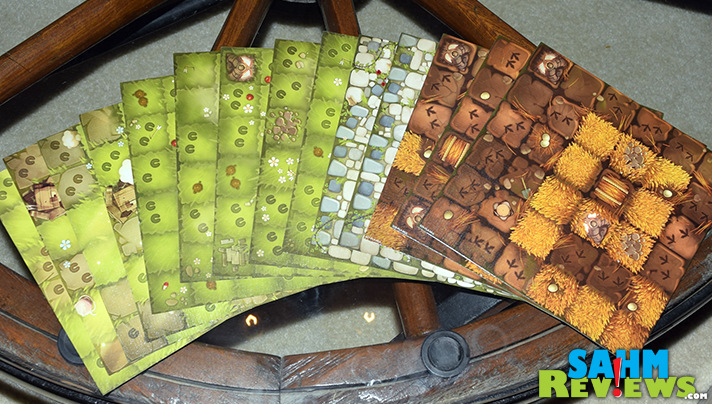 The playing area is comprised of various 2-sided 6×6 map tiles, either randomly laid or set up to match a written campaign. Enemy monsters are represented by cardboard discs with a picture of said creature on the front and their stats on the back. 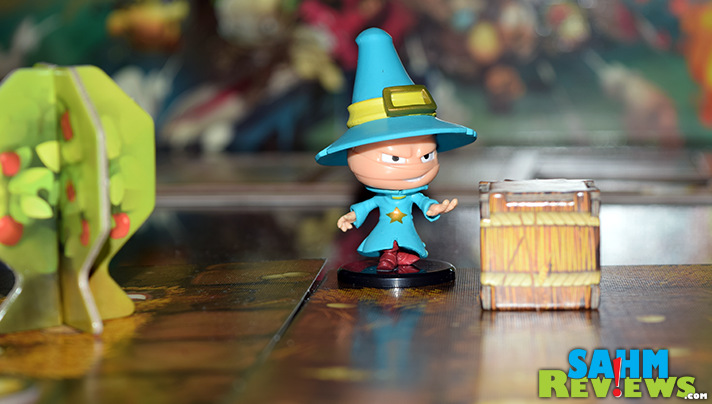 There is some assembly required before you can play your first round of Krosmaster Quest. A number of 3-dimensional hay bales, trees and wells are assembled and placed on their matching spots on the map tiles. These provide line-of-sight challenges for both sides and should be used wisely when moving towards your enemies. 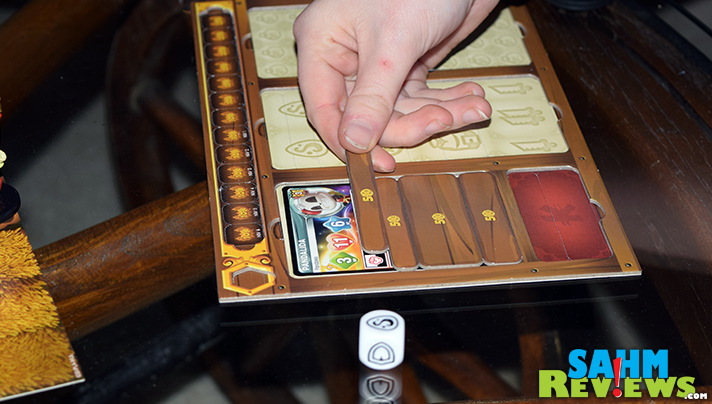 The included player boards are one of the most unique accessories I’ve ever seen in a board game. Each board holds a card matching the player figure you selected and is covered by a number of cardboard panels that you must ‘unlock’ to attain the next power of that character.

Similarly there are tiles on the right side of the board that represent bag space. Unlocking those will allow you to carry more items. Across the top is another area, this time one you must fill instead of remove tiles. Called the Geegee Path, fill it with tokens to move yourself closer and closer to victory.

Eighty Item Tokens, 77 Mob Tokens, 100 Event Cards, 62 Personal Quest Cards, 100’s of Resource Tokens and various Markers are also included, as well as a marketplace where you can purchase items you might need to be successful in your campaign. And we haven’t even touched on all the Scenery Elements and custom dice! Thankfully, Cool Mini or Not thought to include nicely-designed storage containers for all these tiny bits and pieces. Without them, staying organized would be a near-impossible task! 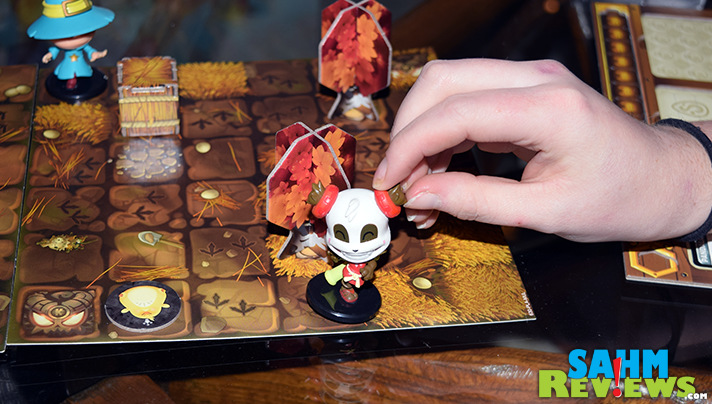 Maybe you’ve heard of the Krosmaster line before, as it has been out for a couple of years. It all began with Krosmaster Arena, a head-to-head battle game using these same types of characters. You could purchase individual packs of single characters to expand your ‘army’, and all of those from the original game and the packs are 100% compatible with Krosmaster Quest! It is our first game where the components can be used not only for this copy, but in previous (and I’m assuming subsequent) titles in the Krosmaster universe.

Don’t let the size of this game deter you from giving it a shot. Krosmaster Quest has an excellent scenario book included that takes you step-by-step through the different mechanics of the game so when it becomes time to tackle a full scenario, you’re completely prepared. You don’t have to pour over the rulebook for hours on end – you can simply jump in and get to playing in just a few minutes! (Disregarding all the cardboard punching and assembly).

You can find a copy for your family on Amazon for around $50 shipped or directly from Cool Mini or Not on their website. Want to know when new characters will debut? Be sure to follow CMON on both Twitter and Facebook so you don’t miss a single issue!

Have you ever played any type of dungeon crawling game?

Tags: board games, CMON, Cool Mini or Not, RPG