I’ve never been very good at word games. Probably because my brother has a natural talent for recalling (and correctly spelling) obscure words. I’d rather play something I actually have a chance of winning.

We recently found another card game at our local Goodwill for 88 cents from a company that we trust for great family games. PDQ from Gamewright Games is a Dr. Toy award winning game, and we were delighted to find a copy at such a great price. 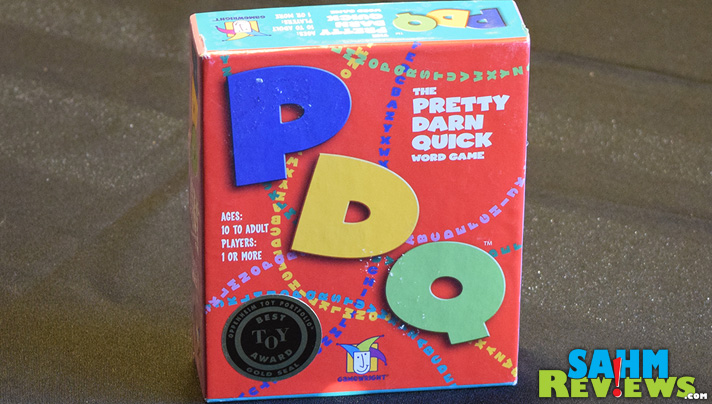 Like most games of this size, the box doesn’t include anything more than the basics. In this case it is only a custom deck of 78 letter cards and instructions. 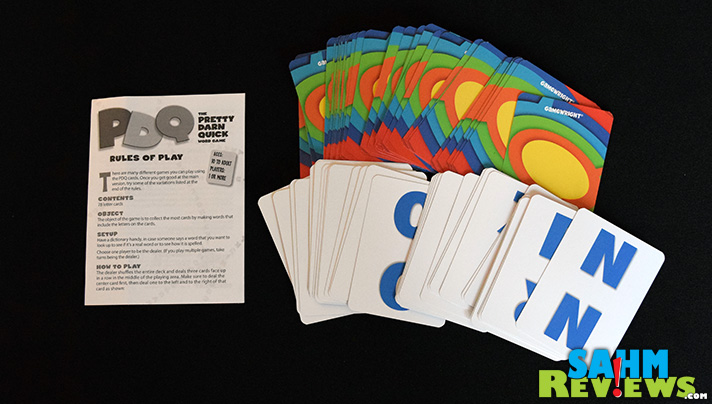 Getting started is rather simple. Shuffle the deck and deal out three cards face up to the center of the play area. Each card will have one letter on it, and here is where your brain needs to kick in.

Using the three dealt cards you must come up with a word that starts with either the first or last letter, then also includes the other two letters in order (depending on which letter you started with). There are only these three cards available and words must be at least four letters long. Every player works from the same three cards, so while you may see “DCT” and think of words like “ducting”, “deficit” or “decapitate”, your opponent(s) might call out “traced”, “thatched” or “ticked”.

The winner of the three cards is the first player to correctly call out a word that includes all three letters. In the case of a tie, longest word wins. If the words are also of the same length (or the same word), then the three cards are set aside and three more are drawn. Only the people who tied get to participate in this round, with the winner taking all six cards. The person with the most collected cards at the end of the game is declared the winner.

And then never allowed to play a word game again…

PDQ is another example of an out-of-print game that is still relevant today. You can find copies on Amazon and eBay as well as your local thrift shop. While it is rated for players aged 10+, there are alternate rules included if you have younger participants. This one might be worth keeping an “I” out for!