Over the past few years there have been a number of times that I’ve wanted to play a board game when no one else was around. Growing up I was a huge fan of solitaire in all its variations, so it should come as no surprise that a good single-player game is something I’m always on the lookout for. We’ve talked about quite a few titles from ThinkFun here on SahmReviews, and while they are plenty difficult for kids AND adults, sometimes because of their design I feel a little silly playing them. It looks like I’m playing a kid’s game!

At this year’s Gen Con convention we were admiring the large booth of German board game publisher, Pegasus Spiele. While modern board gaming has been popular in Europe for decades, it has only been in the past few years that it has really flourished in the United States. Historically, if a game gained popularity overseas, the rights to publish it would be acquired by a U.S.-based company who would then produce a batch for sale domestically. We knew that Pegasus Spiele had brought a number of our favorite game titles to life – AquaSphere, Modern Art and Luna are just a couple examples that were offered by U.S. publishers and featured here. Now, instead of missing out on this growing market, Pegasus Spiele has begun offering their unsigned games to us directly! And let me tell you, there are a LOT of undiscovered gems in their catalog! 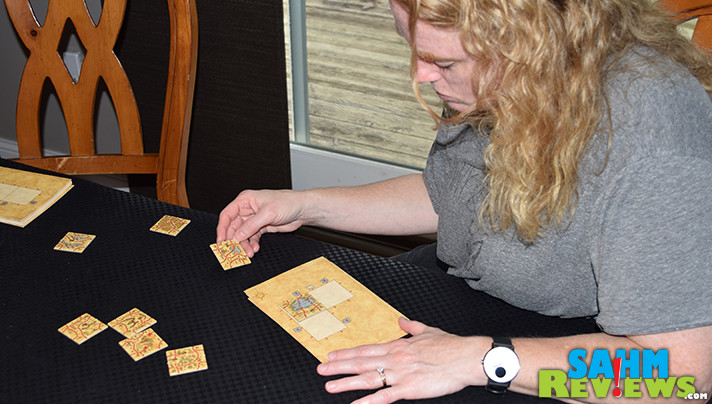 The first one to catch my eye is Brains: Schatzkarte, which translates into “Treasure Map”. This Brains series follows the same puzzle logic theme as the titles from ThinkFun, where you have a list of different puzzles to complete that get increasingly harder as you progress through them in order. The first few are meant to introduce you to the mechanics of the particular puzzle, while latter examples add additional features or are simply much harder to solve. They have the bonus of being designed to look like a “real game” and not a kid’s toy! Plus, they have the name of a famous designer behind them – Reiner Knizia (Sakura, Lost Cities, Too Many Cooks)! 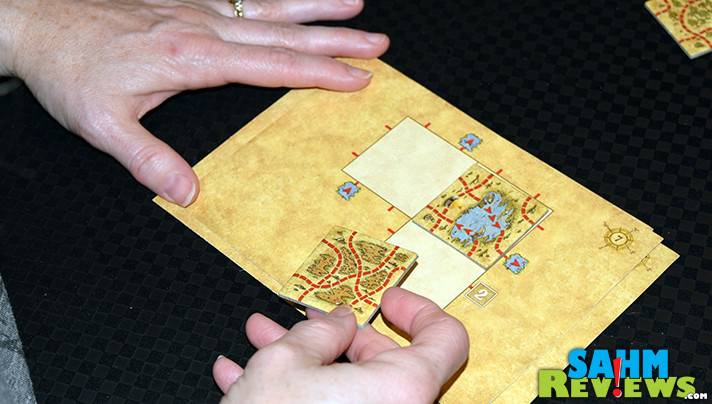 In Brains: Schatzkarte your goal is to correctly arrange tiles onto various maps so they meet the criteria shown on their edges. Each puzzle is represented by one side of the included cards and will require anywhere from one to six of the eight tiles in order to complete it. Remember, these tiles may be rotated in any direction, so the overall number of combinations is almost incalculable! 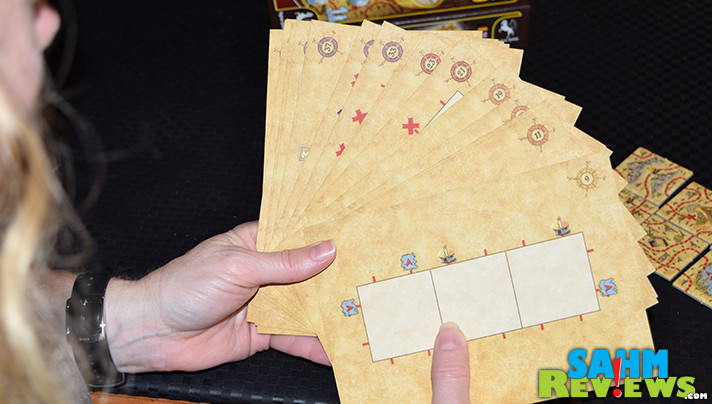 The first ten challenges in Brains: Schatzkarte are called “Warm Ups” and teach you what the different symbols mean. An arrow on water means the final path must travel through the lake in the direction indicated. A treasure chest means you must pass by one on that path. A red “X” denotes a pathway ended at a matching red “X”. A hut symbol with a number signifies the path will traverse through that many villages, while a brown box with a number denotes a trail that goes across exactly that many tiles. Other symbols will come in pairs and means that particular path must enter and exit at those locations. 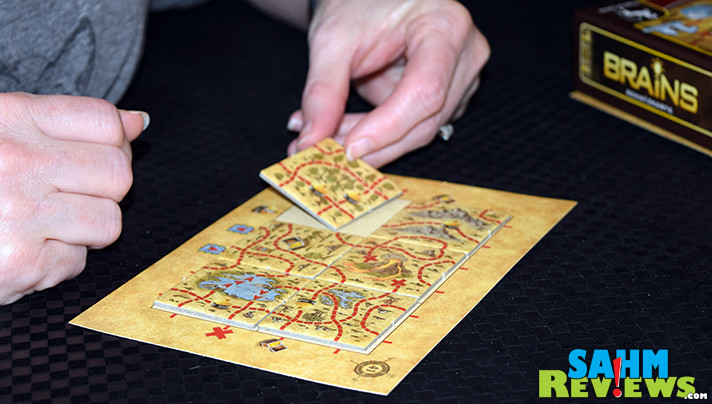 After solving the first ten warm up puzzles, you’ll be ready to move on to more hazardous paths. After those you’ll reach “Treacherous Terrain” and if you’re feeling lucky, might even try the “For Experts Only” or “Ultimate Challenges” puzzles! Luckily there is a little help for those of us that might have difficulty at the higher levels.

Unlike the previously mentioned games from ThinkFun, Brains: Schatzkarte includes a hint book. While most puzzle games have solutions tucked away out of sight, this treasure map game has a separate section to keep you on the right path. Utilizing a hint will give you the positioning of one tile in your puzzle, hopefully helping you decipher the location of the rest. If you completely give up on one, there is always the answer key to tell you what wrong turn you took!

And this version of Brains is but one in a series of currently four different titles! Others themed in potions, Japanese gardens or emoticons are also available if treasure hunting isn’t your preference. No matter the theme, they are all available for under $15 either on Amazon or direct from Pegasus Spiele. They’ve also announced a competitive version of Brains, so make sure you’re following them on Facebook or Twitter to find out when it will hit our shores! We hope to bring you details as soon as it is available!

What game have you heard of that isn’t available in the U.S. yet?