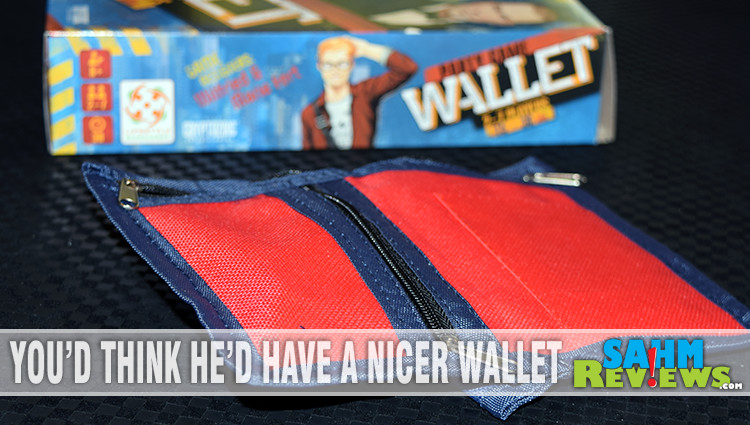 They say all things happen in threes, good and bad. We try not to focus on the bad things in life, so we tend to write about only the good. If you see a game on SahmReviews it is because we genuinely liked it. Life is too short for bad games (should we trademark that?) and you don’t want to waste your time reading about something that everyone hated.

Last week we told you about Goodcritters, a new game by Arcane Wonders that in all seriousness has become our favorite I-divide-you-choose game. It is gangster-themed and it isn’t difficult to picture yourself as a 1920’s-era tough guy trying to decide how to split up the day’s take between your cohorts. Goodcritters has earned a spot in our game night bag for some time to come.

But today we’re playing Wallet by Cryptozoic Entertainment. It too is gangster-themed, but with a twist. Instead of sitting in the safety of your hideout you’re having the time of your life at the mafia boss’ birthday party. Your timing couldn’t have been worse! A raid happens and your boss abandons everyone in his private helicopter! Unfortunately for him, he drops his wallet. Fortunately for you and the other cronies, it is chock full of money, jewelry and IDs! In the few moments before the authorities break down the door, everyone scrambles to rummage through the wallet to find something to save them from arrest. Just don’t take too much or you’ll look suspicious! 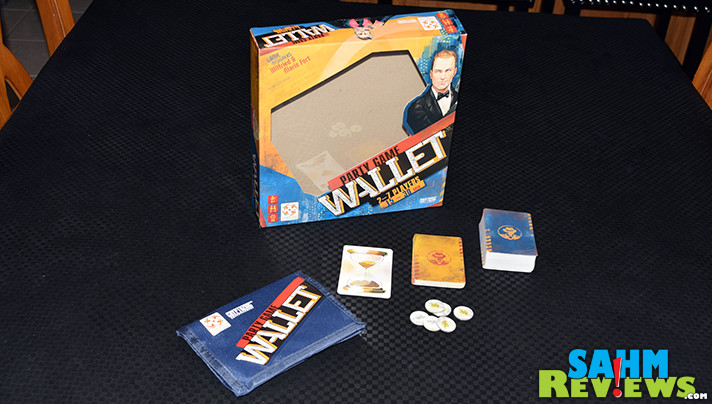 The game of Wallet includes a number of standard-sized playing cards, victory point tokens, some loose coins and an 80’s-style flip wallet. Each player receives one random coin, two Special Cards and five Playing Cards from the deck of 80. Five extra ID cards are placed in the wallet as are all the Victory Point Tokens and the rest of the Playing Cards. A small stack of six hourglass cards are placed in the center of the play area and act as the round’s timer. The player with the lowest-valued coin begins the game. 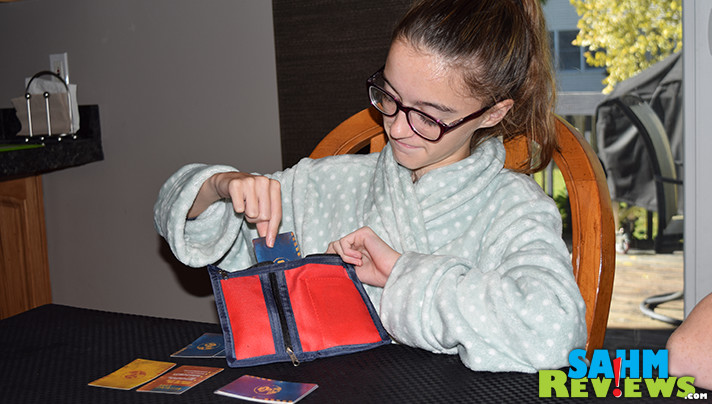 Wallet is played over three identical rounds with scoring at the end of each (you’d think the gang members would know by the third round that the boss is going to leave them to fend for themselves). On your turn you can choose from four possible actions to take. You can take a card from the wallet without looking and add it to your hand. Conversely, you can put one of the cards currently in your hand back into the wallet.

You’ll need an ID to present to the police, so if you haven’t been lucky enough to draw one, you may pay 300 CU (the game’s currency) to take one of the extra ID cards in the separate compartment of the wallet. Lastly, if you’re ready to face the authorities, you may elect to turn over one of the Hourglass Cards in the center of the table. 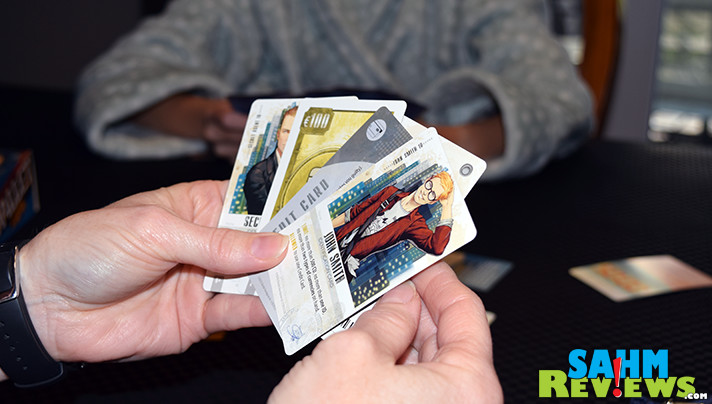 Each ID has special limitations on it which you must adhere to. Some limit how much cash you can carry while another requires you to have a lot. Meeting the requirements of the ID is key in convincing the cops that you are who you say you are (innocent). Get caught with the wrong items or too many ID’s and you’ll instantly be considered guilty and lose a Victory Point Token of your choice. 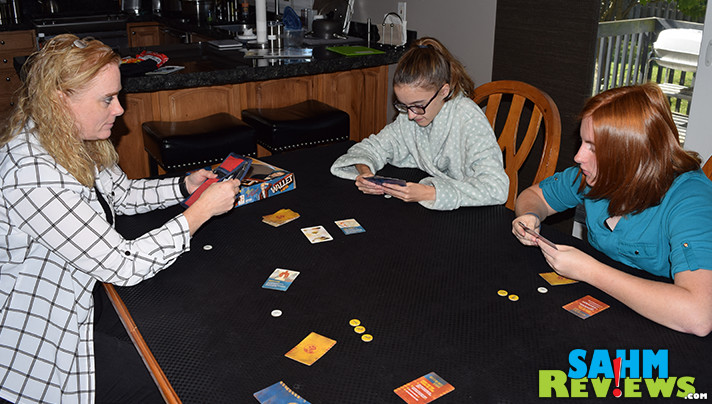 Randomly in the deck are three Police Officer Cards, which means that another player (or more) might actually end up as the fuzz! They’ll reveal themselves at the end of the round and will inspect another player if they also possess a badge. If that player turns out to be guilty, the Officer confiscates all of their money and jewelry! But even the Officer isn’t above suspicion. They must not have more than one ID nor more than 500 currency units or more than two types of currency on hand in order to be also considered innocent. No one is above the law!

At the beginning of the round each player received Special Cards. These are played on your turn and award special actions like allowing you to take two actions, forcing everyone to pass a card to the player on their left or even attempting to steal a card from another player by guessing what they have in their hand. With fifteen Special Cards available in Wallet, no two games will be the same! 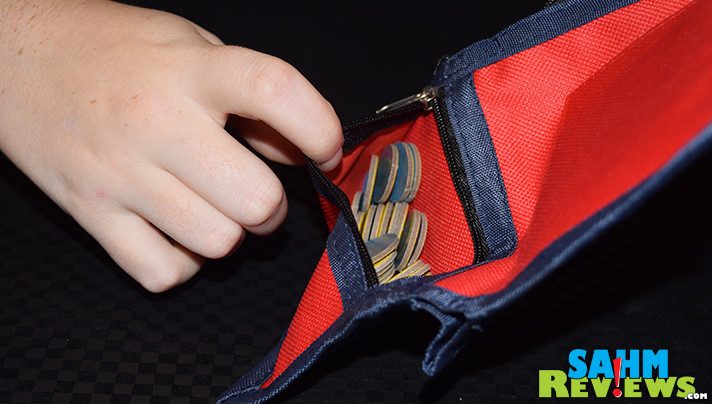 A round of Wallet ends immediately when the last Hourglass Card is turned over (one is automatically turned over by the starting player each time it comes back to them, and one when players take that action). Each person is examined to determine their innocence or guilt (again, guilty players lose a Victory Point Token). Tokens are awarded to innocent players in the order of their wealth and depending upon the number of players. All Victory Point Tokens have a random number of points on the opposite side, so a bit of luck is needed to pull ahead. All cards are collected and reset as when setting up for the first round and the next round begins. After three complete rounds, the player with the most points totaled from their Victory Point Tokens is the overall winner of Wallet!

Similarly to the previously-mentioned Goodcritters, Wallet supports more than the normal four players, easily serving up to seven! If you’re looking for a quick party game that requires both skillful planning and a bit of luck, your can find Wallet on Amazon or at your favorite local game store. Make sure you’re following Cryptozoic Entertainment on both Twitter and Facebook as we hear rumors of an expansion of the DC deckbuilding game in the works that you won’t want to miss out on!

What is your favorite gangster-themed game?