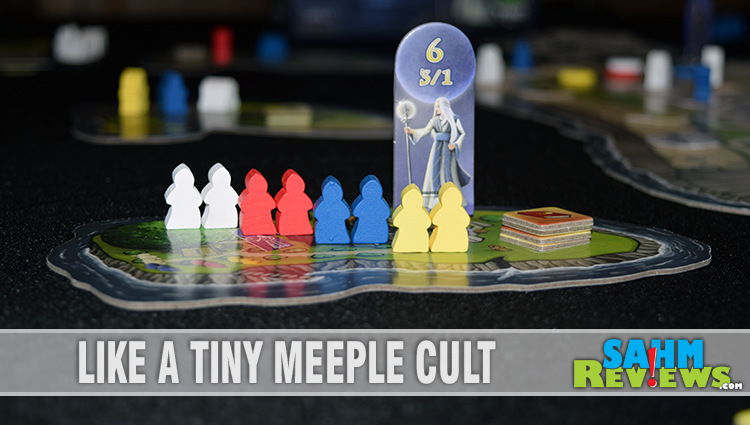 I’m going to try to temper myself a bit when telling you about this game we have been playing for the past couple of months. In the hobby game world, people tend to develop favorites – whether it be a designer or publisher. Some designers’ styles might speak to you, making the purchase of their latest issue less risky. Just like having a favorite restaurant, you’re more willing to try something new when you’ve liked what they’ve served you in the past.

The same goes for publishers. Solid companies that don’t cut corners and consistently put out good products are who I like to reward with my hard-earned dollars.  There are a few that do a great job of balancing quality of components, retail price, game play and plain old fun. One of them is Tasty Minstrel Games out of Mountain Green, UT. 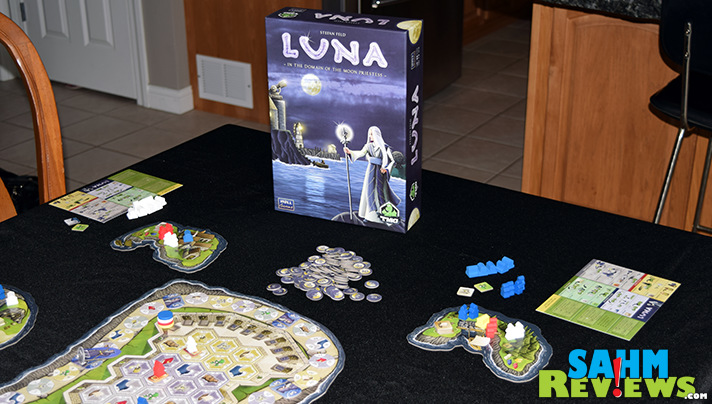 There are also a handful of game designers whose games I know I will most likely enjoy, even if I know very little (or nothing) about them. A couple of them I have decided to try to collect every title they’ve ever issued. At the top of my list is Stefan Feld, a German board game designer that is known for some of the best-rated Euro-style games ever made. Last year I excitedly previewed AquaSphere, Stefan’s latest creation. This time around Tasty Minstrel Games contracted to reissue a lesser-known title of his with upgraded artwork and components – Luna! You can only imaging my elation to learn that one of my favorite publishers was issuing a game from my favorite designer!

Previously issued by Z-Man Games (another of our favorites!), Luna: In the Domain of the Moon Priestess, is a tactical game for 1-4 players which takes place on remote islands. Each player is the leader of an Order of the Moon Cult whose Priestess is retiring. This Moon Priestess is tasked with choosing her replacement and you are vying for this honored position. 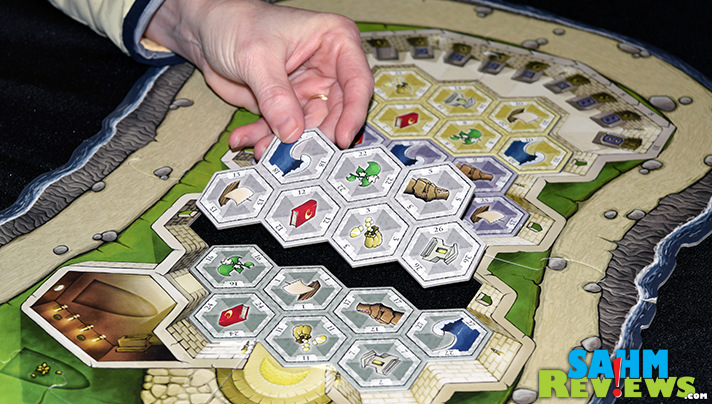 The large main board is made up of puzzle-like pieces which are assembled during setup. Depending upon the number of players, the center pieces will either be used face up or turned down to represent an area that isn’t available. This alone makes nearly every game different, as the pieces can be placed in any order you wish! 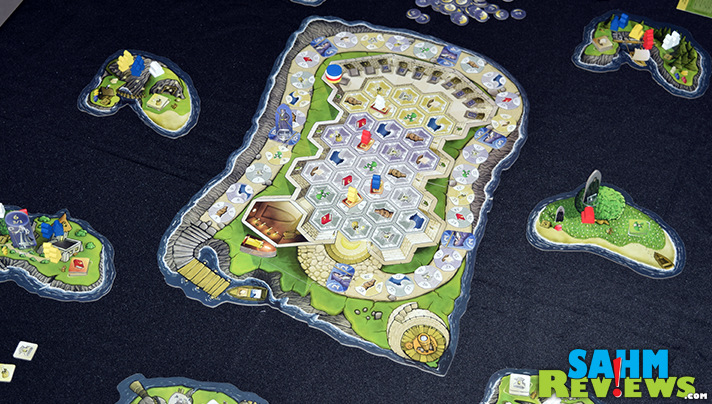 Like any Euro-style game, you are accumulating victory points, with the highest being declared the new Moon Priestess at the end of the game. There are three main methods of scoring in Luna: 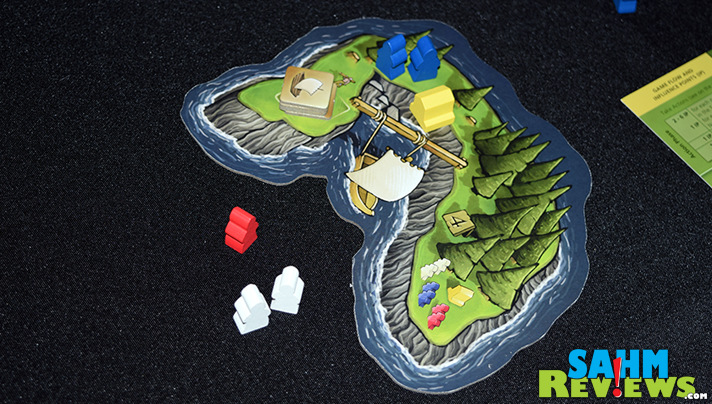 Around the main board exists seven islands. Each island represents a different action you can take on your turn, if you have the right number of Novices on them. Some islands allow you to collect a token which will allow you to travel between islands. Others give you the ability to build shrines, while some play an important role during the battles on the main island. All the while there are NPC’s (non-player characters) moving about the islands that award (or take away) victory points, so timing the placement of your Novices is imperative. 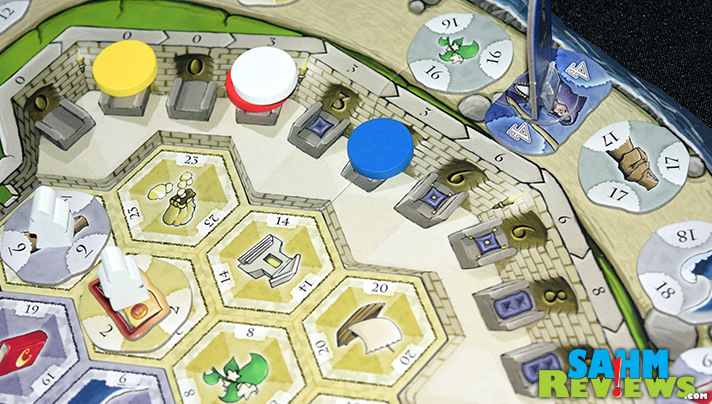 At the top of the main island sits the Council of Priests. They have great influence over who will be chosen as the new Moon Priestess and gaining their favor is another way of scoring points.  And not only will you receive victory points at the end of the game depending on your position with the council, this track also doubles as a tie-breaker when scoring the island bonuses. 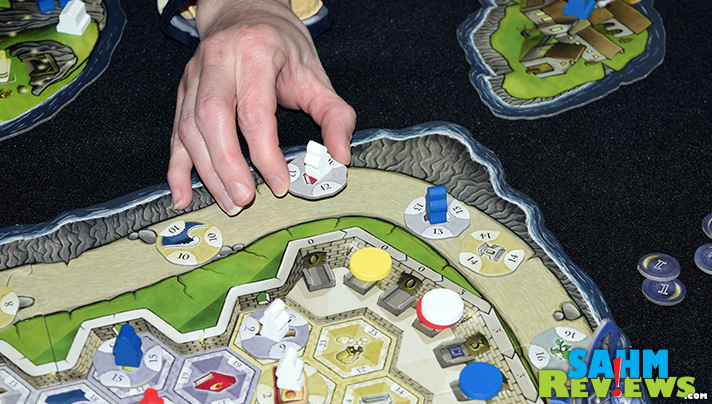 The center of the main island is where the real fighting occurs. When you first move a Novice to the main island, he claims a tile on the path surrounding the temple. He then is moved inside the temple to become ‘sanctified’, placing the tile and player token on the matching numbered space on the map. In what is best described as an area-control mechanic, any claimed spaces touching the space you just placed which have numbers lower than your number are “kicked” out of the temple and sent to the coast. You immediately receive one victory point for every displaced Novice! At the end of each round you are also awarded a victory point for each of your own Novices inside of the temple! 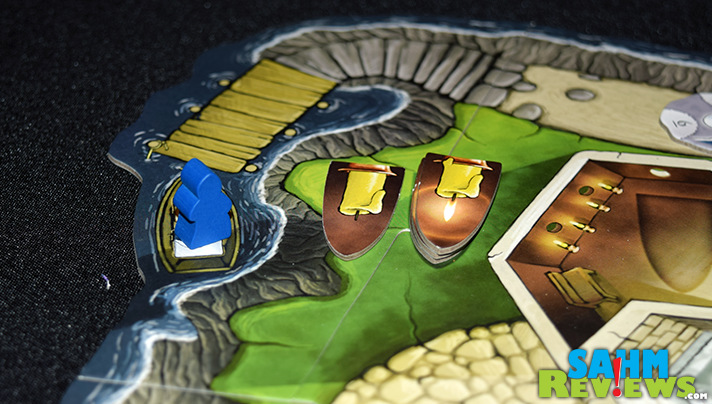 And while those are the main scoring techniques you’ll employ, there is still more going on in the game. Novices in the temple can be protected by sacred books, which can also be stolen! Novices on the islands can multiply as an action as well as claim tokens that allow you to bribe the temple guards. There are so many paths to take strategically that you’ll need to choose one and focus on maximizing your results in order to become the new Moon Priestess!

Luna turned out to be everything we expected from a Stefan Feld title and more. There is a LOT going on at all times, and the turns go rather quickly once everyone gets settled into the rules. The different scoring paths allow you to play the game nicely (going after the Council of Priests’ favor) or meanly by moving the Apostate (one of the bad guys on the island) to the areas where your opponent is. For a 4-player game, you can expect it to take around two hours to complete, and much less for lesser numbers of participants.

You should be able to still find copies of this newest version on Amazon for under $40, a steal for a solid game whose theme will appeal to all ages and sexes. We can only hope that Tasty Minstrel Games continues to sign superstar designers like Feld, and issues (or reissues) their games with gorgeous art and better-than-average components. I’m watching their Facebook and Twitter timelines for any hints about what’s up and coming!

Is this a game theme that would appeal to you? If not, what type do you prefer?