While I’m still on the subject of games I’m too slow to win, my girls found a new favorite to show off their speed skills. The last time we played a spot-and-grab type of game was Jungle Speed, one of our Thrift Treasure finds. Don’t get me wrong, Jungle Speed is a very good (and highly rated) game. But you’re always all grabbing for the same item – and the fastest always wins. Not fun for those of us that are speed-challenged.

It was a couple weeks ago when we were introduced to Gloobz by Gigamic. You might recognize Gigamic from a couple of the abstract games we added to our collection last year. Quarto! and Quits are staples in our library and are still among our favorite wooden games. Gloobz is quite the opposite of those two. Made with a plastic material that reminds you of a rubber duck, it includes four adorable Gloobz along with three colored paint cans, six score trackers and a custom deck of cards. 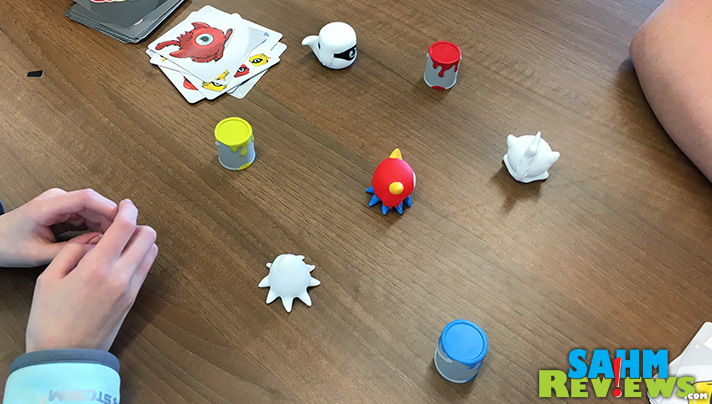 Each of the Gloobz are shaped differently (square, circle, triangle) and the fourth is a Megagloobz that has the features of all of the others. All four Gloobz are placed in the center of the table along with the three paint cans, in a circle within reach of up to six players. 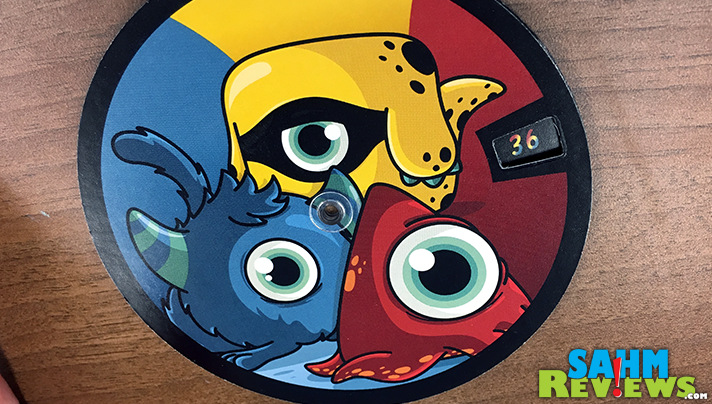 Shuffle the deck of cards and place them in a stack in the middle of all the figures. Each player receives a scoring tracker set to zero. First player is chosen (usually the youngest) and the game is ready to be played! 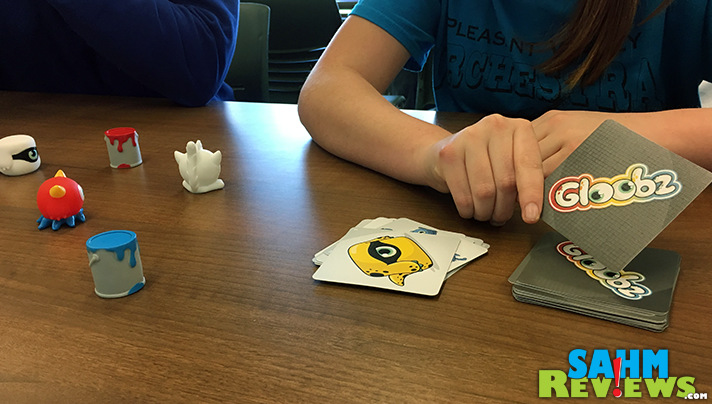 If “More Gloobz” was called, all players must examine the face up card and catch each Gloobz whose shape appears the most number of times on the card AND each paint can whose color appears the most. There will be instances where there are ties, making more than one Gloobz and/or paint can eligible to be taken!

As you probably guessed, “Less Gloobz” is exactly the opposite. Grab the Gloobz and paint cans than appear the least (or not at all) on the card. In both situations, once you touch a figure you have to keep it, even if you changed your mind. 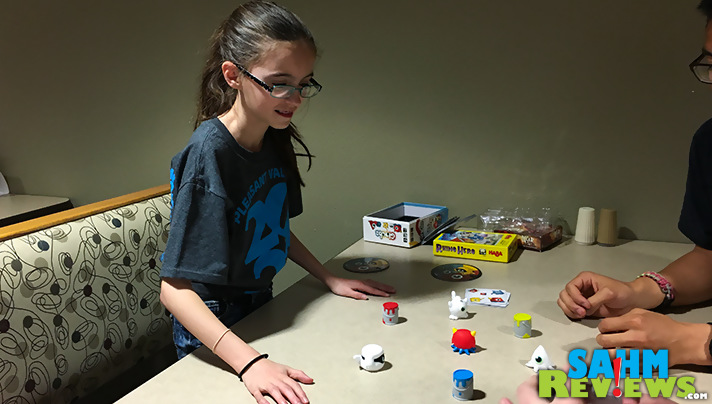 Players score one point for each correct figuring picked up and lose one if you incorrectly took one. Depending on the number of participants, you’ll play to 36 points (2-3 players), 24 points (4-5 players) or 18 points (6 players).

But what about the Megagloobz? If he appears on the turned-up card, it doesn’t matter whether “Less” or “More” was called, this round will be won by the person that is the first to grab him. Those who succeed are awarded 3 points!

And there’s one last twist. Some Gloobz are very small, so if you spot a magnifying glass on any card you need to quickly catch as many figures as possible, regardless of color or shape! Every one grabbed earns you a point, even the Megagloobz.

From the photos you can understand how Gloobz quickly supplanted Jungle Speed as our daughters’ favorite “grab game”. It takes much more than just being the quickest to grab, you have to make sure you’re grabbing the right ones while remembering whether you’re looking for “more” or “less”! I can forsee a whole line of expansions introducing new Gloobz with new powers, and I’m sure they want those too.

Gloobz is readily available on Amazon for under $18, a bargain for how much fun you’ll have. Hop over to Gigimic’s website to see their entire line of current games and follow their English-language Facebook and Twitter timelines for new product announcements and specials!

Which Gloobz character is your favorite?