We like to think we keep on top of the game industry as well (or better) than most other sites. We are gamers ourselves and attend a number of board game conventions each year, including the two largest in the U.S., Gen Con and Origins. We make a point of not only visiting the exhibitors’ booths during convention hours, but also spending some time in the areas devoted to unpublished or prototype games. That’s how we originally came across Pencil First Games, who have gone on to publish a number of popular titles.

Every so often we come across a publisher that has slipped under our radar. We usually notice them after their first game hits the shelves. Sometimes they are self-published, other times a result of a successful Kickstarter campaign. Regardless of the situation, it is usually at that point when we like to bring them to our readers’ attention and highlight their offering for your consideration. Today is a little different.

This past summer we discovered another unknown (to us) publisher that has already produced not one, not two, but three games we have been enjoying during summer break. Zafty Games is run by a family of friends and has ramped up using the now-traditional method of bringing new games to market – via Kickstarter. To date they have successfully produced four titles and four expansions in total, with more in the works! Let us show you a little about the three we’ve been passing the time with.

The first thing we noticed about H1ntegers was the rulebook. Many times we’ve lamented on how involved the rules are, requiring hours of reading and comprehension before attempting a game. That’s not the case with H1ntegers. The entire ruleset is printed on the front and back of a 4″ x 6″ index card, with a second matching card featuring “Helpful Tips” and examples. Needless to say it didn’t take long to be up and running. 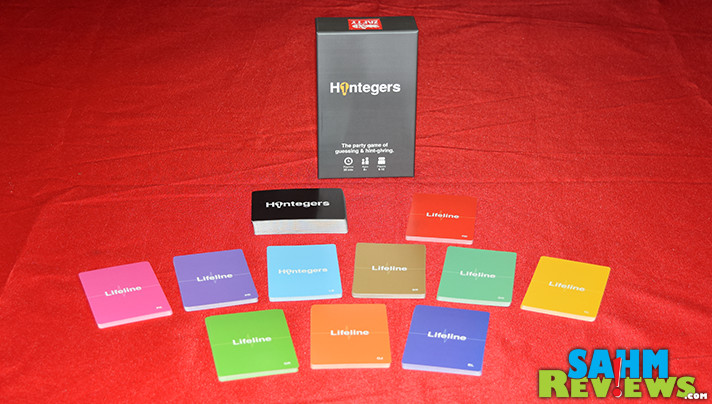 Besides the two rule cards, you’ll also find 180 standard-sized cards in the box comprised of 130 Number and Lifeline Cards and 50 Category Cards. The Category Cards are shuffled and placed in a pile in the center of the play area. Each player (up to 10!) takes 10 Number Cards and 3 Lifeline Cards of a matching color. One person is randomly chosen to be the first Hint Giver and they flip over two Category Cards to begin the game. 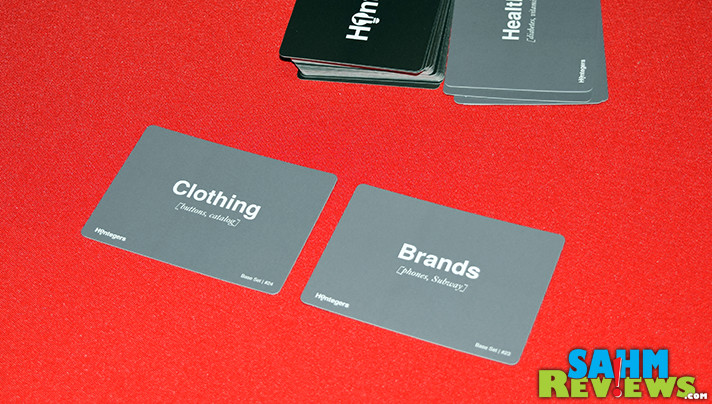 The Hint Giver chooses one of the two categories and passes the unused one to the person on their left (to be used in the next round). With the chosen category in mind, they must then come up with a hint and a matching number. The Number Card is played face-down in front of them, while the hint they thought of is revealed to everyone. This hit must be only a single word or proper noun – nothing else is allowed! 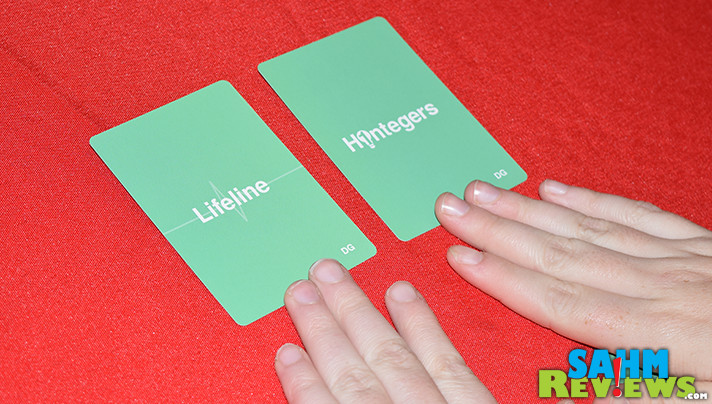 The other players must then guess at the Hint Giver’s number by considering both the category and their vocal hint. They will place one of their number cards face-down and optionally play Lifeline Cards face-down next to their guess. Starting clockwise from the Hint Giver, players reveal any played Lifeline Cards and resolve them immediately if need be. These cards allow you to copy another player’s guess or add or subtract one from your current guess, essentially giving you two numbers this round to match to the Hint Giver’s. 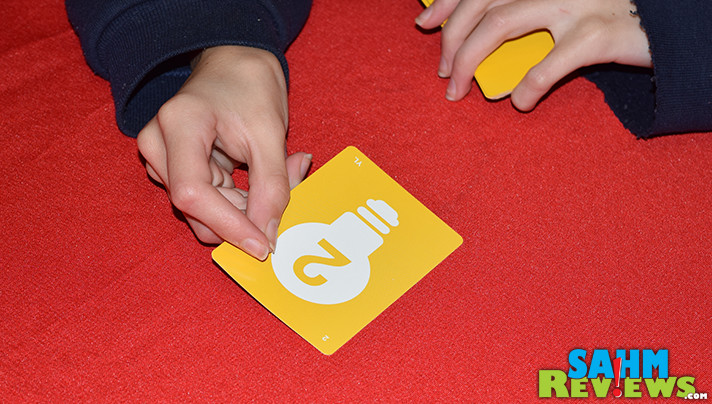 All players then reveal their guesses simultaneously. If at least one person correctly guessed the Hint Giver’s number, the Hint Giver and all correct Guessers discard that Number Card. All incorrect guesses go back into their player’s hand. Lifeline cards are discarded after use as they are one-time use only. The next player in clockwise order becomes the new Hint Giver who turns over one new Category Card, selects one of the two they possess (remember, they received one from the previous Hint Giver) and begins working on their hint! Play continues in this manner until someone only has three Number Cards left. That person (or persons, if there is a tie) becomes the winner of H1ntegers! 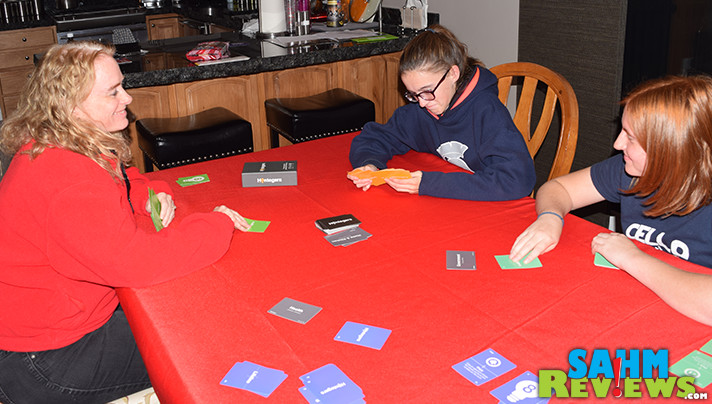 We love party games that support large numbers of players, and at only $15 on Zafty Games’ website, this one is a bargain!

I’m sure you’ve played a number of games that require you to eradicate a disease or virus in order to win. Controlling the spread of an outbreak is the most basic requirement in one of the most popular hobby games ever, Pandemic. We were surprised to discover this game that actually wants you to become infected and be the first to die! I guess to be successful you must really have a Death Wish! 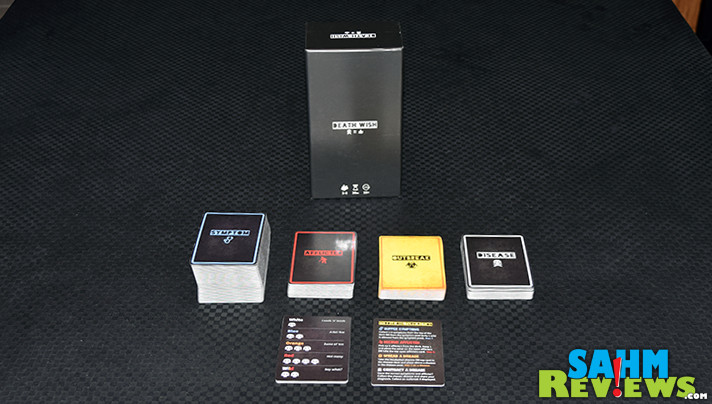 Death Wish is a card game about, you guessed it, dying. You are racing to create the right conditions to catch fictional diseases, each worth a different amount of points (skulls) towards your eventual demise. A word of caution – while the mechanics of Death Wish could easily be enjoyed by younger players, the names of the diseases are not kid friendly. While funny, names such as “Smallcox”, “Itchyballosis” and “Assburgers” are probably subjects you don’t want to discuss with pre-teens. And if these aren’t risqué enough for you, there’s always the NSFW expansion! 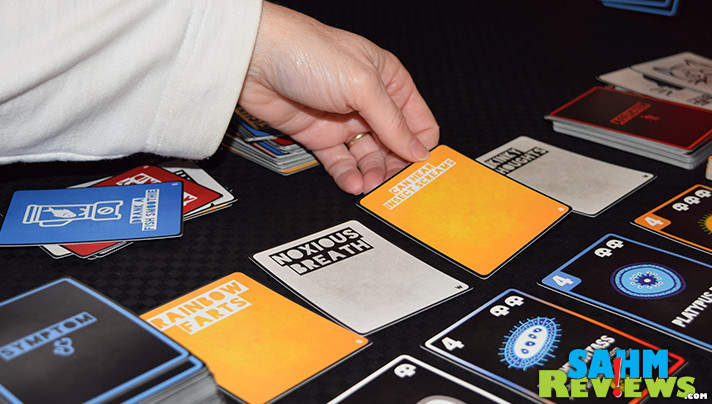 From a pool of diseases in the center of the table, you’ll try to match them up with an affliction (how you caught the disease) and symptoms of the same color. Turns are rather quick with your only options being to take two symptoms from the pool or deck, gain an affliction by drawing two and choosing one (or taking the one on top of the discard pile), spread diseases by covering one in the pool with a new card or contracting one by fulfilling all of the listed requirements (matching symptoms and affliction). 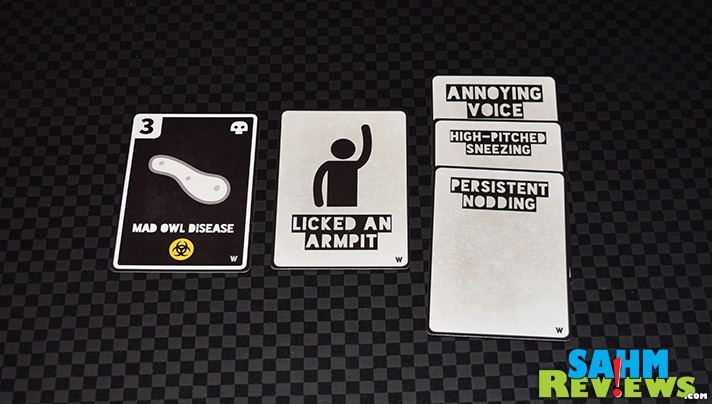 Card management is crucial as there is a strict hand limit of seven symptoms and three afflictions. And since everyone is working from the same pool of diseases, it isn’t uncommon to have the infection you’re saving for taken by another player. The best part of Death Wish is the revealing of your completed disease as you must read out what you did (affliction), what you caught (disease) and the resulting effects (symptoms)! 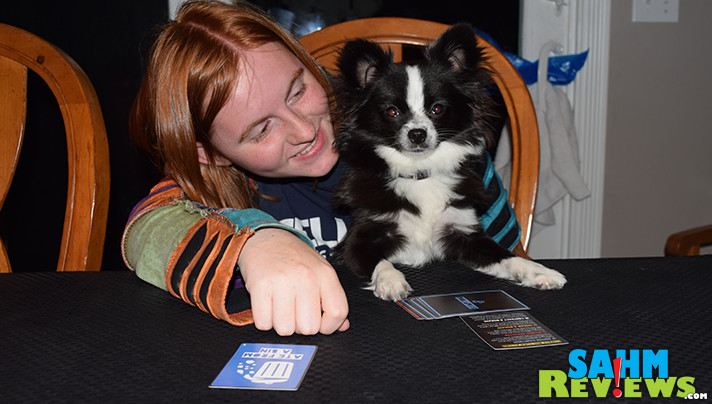 The first player to collect enough skulls on their completed diseases (varies with number of players) wins Death Wish! Supporting up to eight players, keep our age recommendation in mind when picking this one up. As long as all players are over the age of 14 or 15, you should be comfortable playing with the cards out of the box. Find your copy on Amazon for under $25!

Pixel Glory caught my eye due to its artwork resembling vintage first-person shooters like Doom or Castle Wolfenstein. This 16-bit style can be seen in a number of offline games like Boss Monster and Pixel Tactics, and conveys a feeling of classic gaming goodness. And just like Boss Monster, Pixel Glory has us defeating monsters in a dungeon until we get to the final boss! 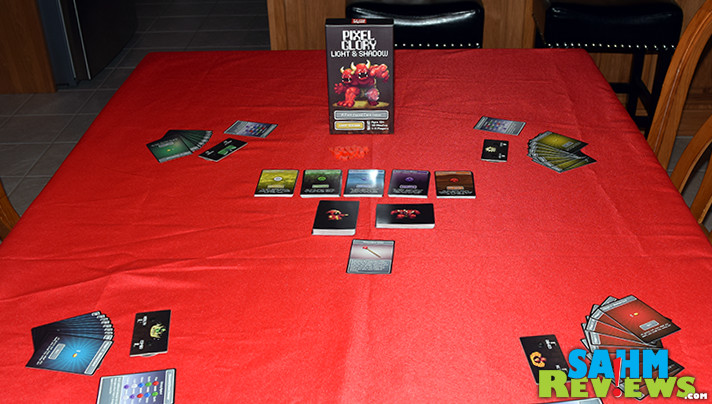 I think you can describe Pixel Glory as a cross between Boss Monster and a small deck building game like Star Realms. The game is split up into two parts – the first where you prepare your custom deck of cards and the second sends you off to fight the monsters with the spells you have curated. 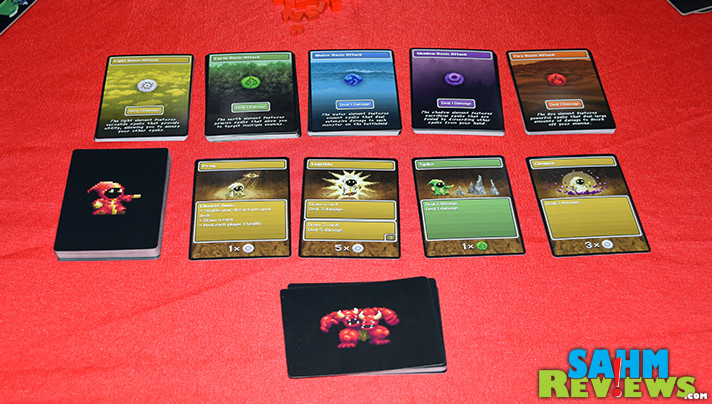 Players start with zero spell cards and only a deck of auction cards numbered one through nine. Three or four spell cards are revealed (depending upon the number of players) and everyone chooses an auction card to bid on turn order. The person playing the highest numbered card chooses first, and then everyone else in numerical order. These auction cards are then removed from the game while the spell card you chose goes into your deck. On each spell card there are icons representing basic spells, and when you win that spell card, you also collect basic spells matching those icons and put them into the same deck.

After nine rounds of bidding, everyone will have nine special spells to use along with a varying number of basic spells. These decks are shuffled and four cards are drawn to be used in the next round when you delve into the dungeon. 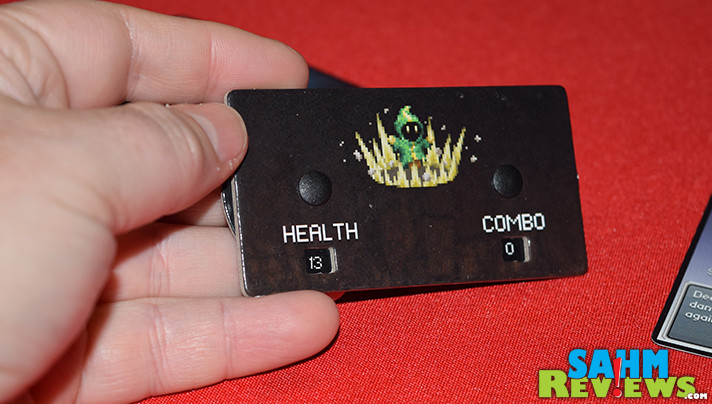 The dungeon houses fifteen monsters, fourteen regular ones and a final boss. Each player receives an HP Tracker which keeps count of combo points and players’ health. Everyone starts at zero combo points, but the total health will vary by number of players and desired difficulty level.  The dungeon is randomly populated with fourteen monsters, which are shuffled and the Dungeon Lord card is added to the bottom of the pile. Three monsters are revealed and the cards are populated with included health tokens representing their printed health level. 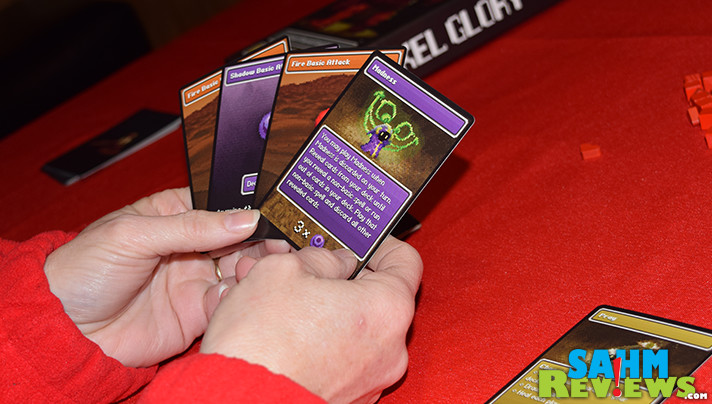 Here’s the kicker. While you have to work together to make it through the dungeon, the only way you can win is to be the person who defeated the most monsters. On your turn you cast all of the spells in your hand, with the option of keeping one in reserve until a later round. If the card does damage, reduce the health of the affected monster(s) by removing their tokens. 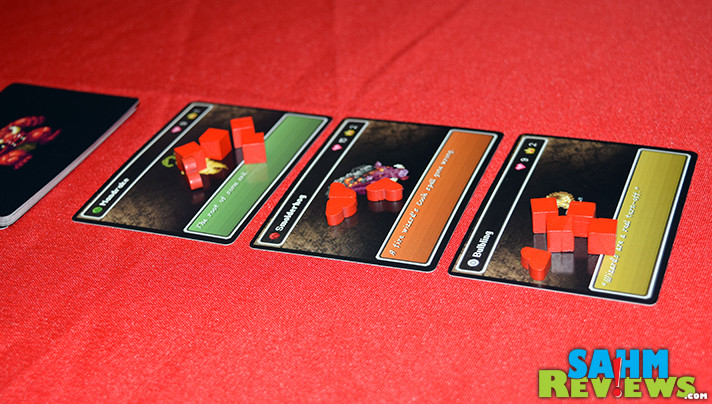 If you last hit on a foe and reduce its health to zero, collect its card until the end of the game and turn over a new one. Each monster is worth one or two fame points and the final boss offers three, and the player with the highest fame total after all monsters have been defeated (or your entire party is reduced to zero health) wins Pixel Glory. 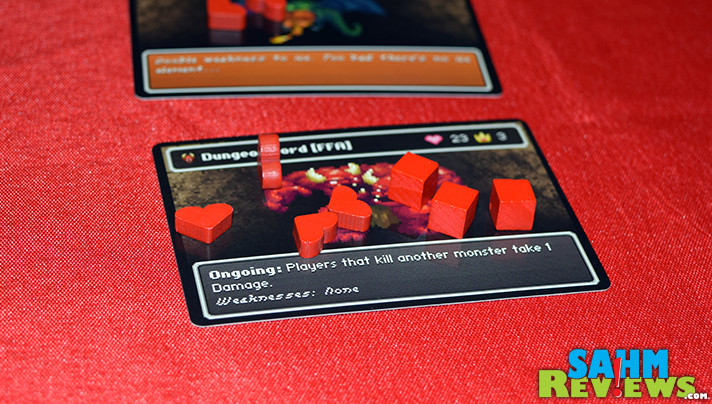 Alternate rules allow you to play Pixel Glory in Cooperative Mode, Solo, 2v2 or even combine it with other titles in the Pixel Glory series to create a larger pool of spells and monsters. A couple “Secret Packs” are also adhered to the top of the box and are not to be opened until told to by the game! You can find the original Pixel Glory on Amazon for under $30 or this new version on Zafty Games’ website for $25!

This is a company we’ll want to keep our eyes on as they come up with new titles or expand on their existing line. We’re following them on Twitter and Facebook and believe you should to! From a quick look at their timeline, it appears there’s a lot of new stuff coming out soon!

Which of these three games appeals to you the most?