I was around 11 years old when we got our first video game system. It was the Sears version of the Atari 2600, the first console to use cartridges instead of having the games stored internally. If you are of a similar age, you remember the blocky and colorless graphics. But you were playing video games AT HOME and not spending quarters at the local arcade.

Our second system came years later with a ColecoVision. We skipped over IntelliVision for the console made by the makers of Cabbage Patch kids because there was an add-on which allowed our beloved Atari 2600 games to still be played. The graphics from this system are what most remember about home gaming systems from that era. A reasonably broad color spectrum and smaller pixels. The ColecoVision (and IntelliVision and to some extent the original NES) are all lumped into the artistic category of 8-bit. A simple term meaning the data for each pixel is stored in one 8-bit byte and the maximum number of colors able to be displayed at any one time is limited to 256. 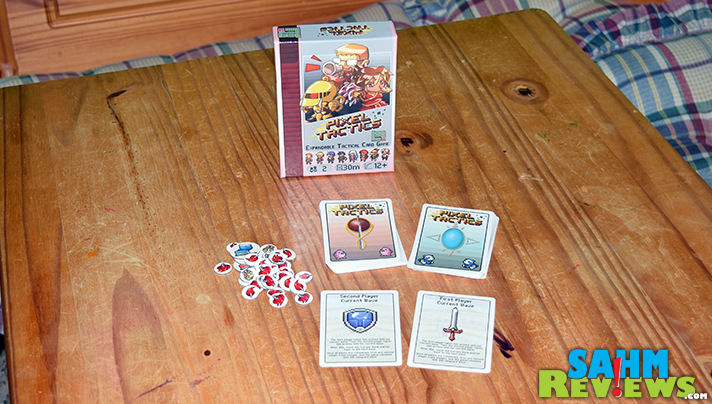 There is somewhat of a renaissance for this art style and you can see it in many apps for phones and tablets. I personally love it because it proves what I’ve been saying all along. You don’t have to have fancy graphics to have a good game. Game play comes first, visuals second. And that is exactly what we found in Pixel Tactics by Level 99 Games. 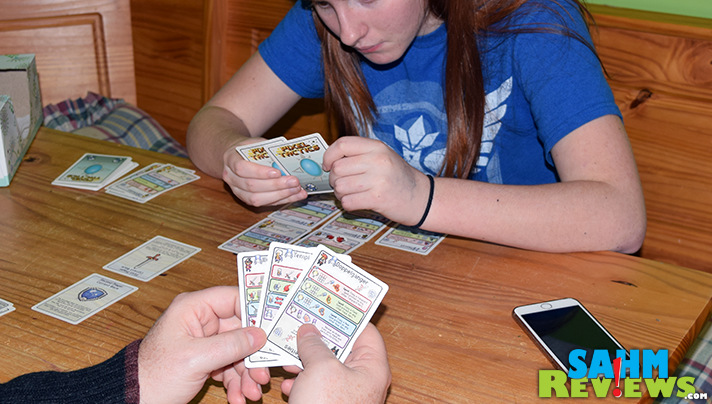 Now before you go and say, “Hey, this is just another card battle game!”, let me assure you this isn’t the case. Sure, the premise is to be the last one living in a head-to-head battle, but Pixel Tactics has much more than that going on for it. Plus it has 8-bit graphics! 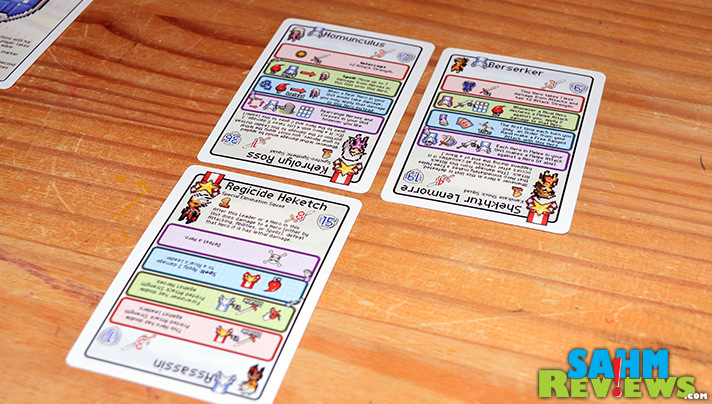 I’m not sure if there’s an official term for the mechanic, but we love when cards serve multiple purposes and only one can be chosen. In the case of Pixel Tactics, each card represents three possible uses. First, you can use it as your leader.  Don’t like the character, turn the card 180 degrees and now they’re miscellaneous heroes protecting your leader. Still not happy with the stats? Each card also has an Order which can be performed. But choose carefully, because a card can only be used once. Execute an order and you’ll never have access to that leader or hero. 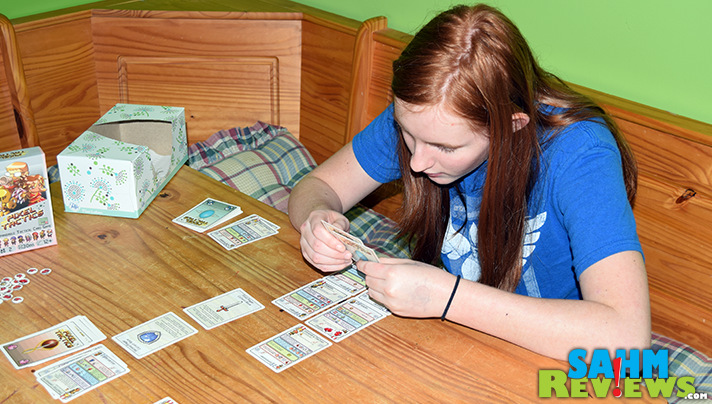 It’s also one of the few card-based games which require careful positioning of your cards. Imagine a 9-space grid (3×3). Your leader will be placed in the center. You’ll recruit up to three for the front row (Vanguard), two to stand at your leader’s sides (Flank) and up to three long-range units in the last row (Read). Depending upon the card’s placement, your hero will have an ability corresponding with their position.

At the beginning of the game you draw five cards and choose your leader from that hand. Thus on your first turn you’ll have a hand of four cards to work from. You may choose from a variety of actions, performing two per turn. You may draw another card into your hand, play a Hero onto the board, attack with an existing Leader/Hero, cast a spell, play an order, clear a corpse, move or switch. Of course you can also elect to pass if you wish.

As previously mentioned, positioning is as vital to the game as overall abilities. Melee attacks can only occur to heroes in the front line, while ranged attacks can target anyone. Some heroes have abilities that allow them to absorb damage to neighboring heroes or the leader. There is even a leader who prevents his heroes from receiving fatal blows, taking the hit to themselves. With each side working from a deck of 25 different cards, the number of possible combinations is practically limitless!

And that’s just in the first box! There are already five different boxes published, each with their own unique sets of leaders/heroes. We’ve only had the opportunity to play this first set, but have to imagine the addition of more characters only adds to the experience!

Pixel Tactics is advertised for players aged 12+, but don’t let that hinder you from buying a copy for younger ones. Kids as young as 7 or 8 can easily pick up the game and be very successful at it. Each round lasts only 5-10 minutes, so you can expect a full best-out-of-three or five to take around 30 minutes. And that’s where things get interesting. Win a round and you capture their leader – they can’t use it again and must choose a new one!

We feel confident in recommending Pixel Tactics as one of the better game buys in the market today. A ton a game variability at a price of under $15. Plus the small size is a perfect solution for a game that travels well. Be sure to check out Level 99 Games’ website for the additional boxes and other great game-related products. If you watch their social media feeds (Facebook, Twitter), you might catch news about a brand new title hitting the markets shortly! Maybe you’ll see it featured here on SahmReviews!

Were you an Atari kid? Nintendo? Xbox?