When someone talks about a “worker placement” game, they’re usually referring to a game with wooden meeples that you use to choose different actions. Placing the pawn on a certain spot on the board allows you to perform an action which furthers your progress of manufacturing/exploring/farming (whatever the game’s theme is). This mechanic has been prevalent in euro-style games for a couple decades now. 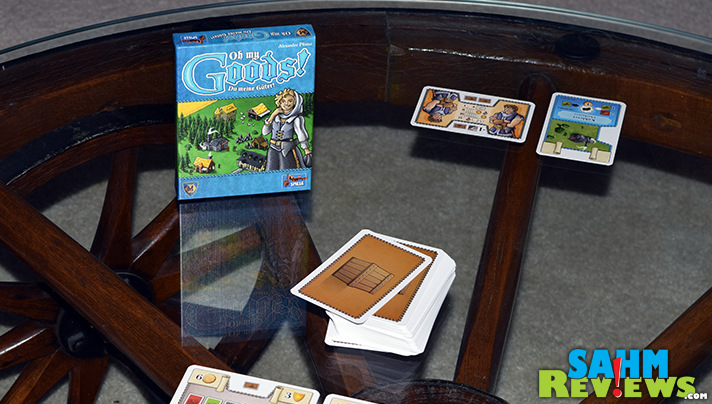 And if I were to suggest we play a “card game”, your mind would most certainly think of traditional games like Hearts, Gin Rummy or maybe even UNO or Crazy 8’s. I was recently introduced to Oh My Goods! by Mayfair Games that somehow combines the two, and does so with amazing results.

So how does one bring the worker placement genre into a card game without adding little wooden bits to the box? By making the cards themselves serve triple-purpose! Of the 110 included cards, 94 are Building cards which also serve as goods or resources depending on their position in the play area. Trust me, it’ll make sense in a moment. 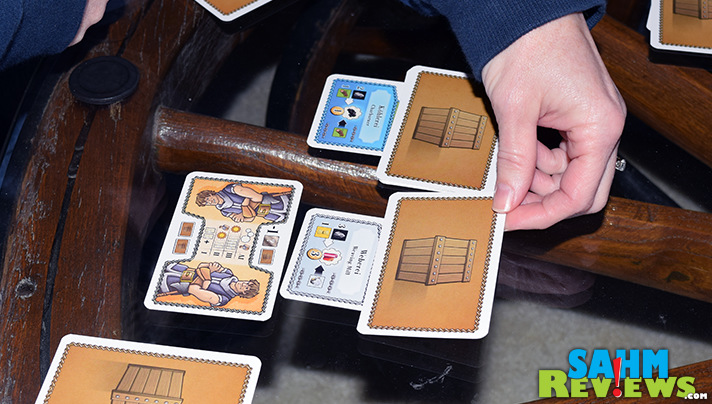 Each player is randomly dealt one Charburner card, which is your first (default) building. You’ll also receive a random worker card – the only one you’ll have for the entire game. Fortunately, it represents both an efficient worker and a sloppy one, again depending on the cards laid-down orientation.

Oh My Goods! is played over a number of rounds until one player has built eight buildings, then one last round is resolved before tallying the final score. Each round is divided up into four unique sections, most of which is played concurrently (keeping the game to around 30 minutes!).

At the beginning of your turn, you may discard and replace your entire hand from the draw pile. Either way, you’ll draw an additional two cards as there is no hand limit. Once everyone has drawn, the active (first) player turns over additional cards from the draw pile until two suns appear. This signifies that the sun has risen and the market is now open. These card represent the resources available in the market (on the left side of the card) and can be used by anyone.

Each player decides simultaneously which building from their hand they plan on building this round and place it face-down in front of them. You also assign your worker to one of your previously-built buildings, paying attention to the market resources available. Their efficiency will dictate the resources needed and the final output gained. 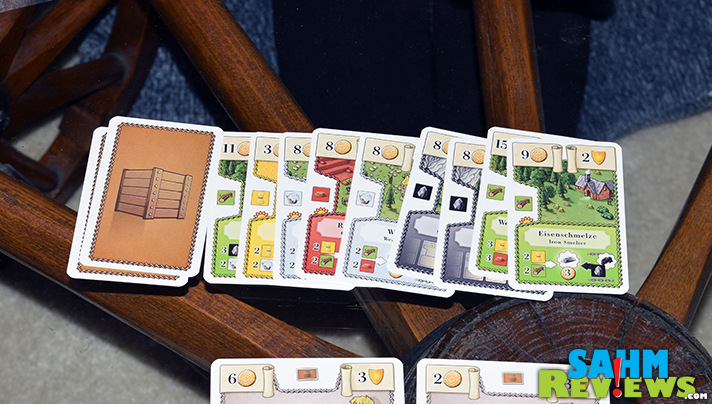 More cards are drawn from the deck, and when two more suns are exposed, sunset occurs and the market closes. These cards also represent generally-available resources, but may or may not match what you need to produce in your building.

The final phase of the round is called “Producing and Building” and is played in turn order. Each production building with a worker is checked to see if the required resources are available in either the marketplace or your hand. If so, take cards from the draw pile (1 or 2, depending on your worker’s efficiency) and place them face-down and sideways on top of the building card. These represent goods produced by that building.

Once a building has produced for the round, an additional production chain may be enabled allowing you to convert as many additional goods/resources to this new good as you would like. These must come from your hand or other buildings, not from the marketplace. 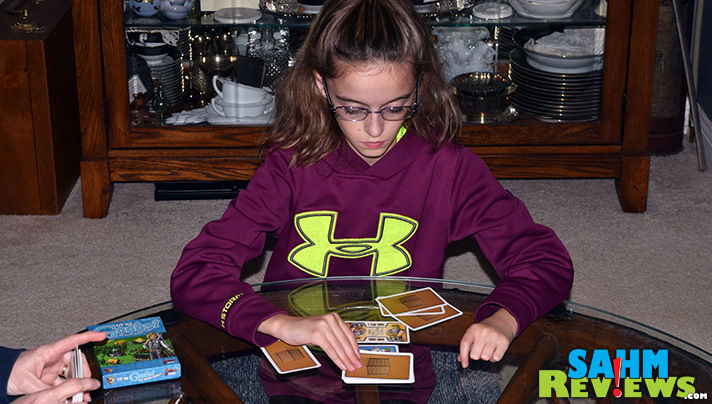 Now you may build the building you set down earlier in the round by discarding goods with a total value meeting or exceeding the building cost in the upper left corner of the card. If you cannot, then simply return the building to your hand. Instead of building, you might also choose to hire an assistant. Not only do these cost coin, but you also must have building matching the colors and quantity depicted on each assistant card. The new assistants are immediately placed on a building without a worker and perform similar to an efficient worker, allowing you to activate more than one building per round.

During each round of Oh My Goods! you may move your worker from building to building, depending upon where they are needed the most. Assistants, however, only move when paid to do so. Slip them 2 coins (to the bank) and they can be transferred to any other unoccupied building. 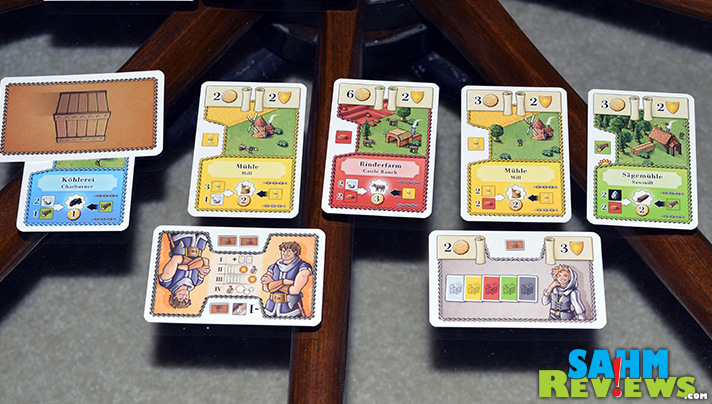 Once eight buildings are constructed by one player and an additional round is played, final scoring occurs. Each building has a different number of victory points printed in the upper right corner as do assistants. Left-over goods are also valued at one victory point for every 5 coins of worth. The player with the highest total is declared the winner!

I have to admit, I have never seen such a complete worker placement game in this tiny of a package. With only two decks of cards, Mayfair Games has published one of the more complex strategy games of this genre. And since Oh My Goods! is available for under $15 on Amazon, it has to be one of the best values if you’re in the market for a traditional euro/hobby game (or stocking stuffer!).

As always, check out Mayfair Games’ Twitter and Facebook feeds to see what they’re working on for the holiday season. Let them know you want a chance of winning a couple of their games during our annual Mega Giveaway!