Back in July we told you about Student Bodies, an extremely fun (and challenging) cooperative game from Smirk & Dagger. Since then we have tried a number of times to escape from that high school; and every time being eaten alive and turned into a zombie. One of these days we’ll make it out safely. Well, at least one of us will…

At the time I hinted about a new product they were releasing called “Nevermore“. We didn’t know anything about the release timeline, but when we strolled up to their crowded booth at Gen Con, it was immediately obvious that it had just been released. I personally witnessed people buying multiple copies as well as sessions springing up in the hallways. While picking up our copy we were told it was a trick-taking game that is a cross between Hearts and Pass-the-Crap Poker. As it turns out, that description was spot-on.

I’m going to start out by saying that if you like traditional card games such as Hearts, Spades and the like, and are tired of staring at the same 52 cards, then Nevermore is the game for you. It combines everything you like about those and adds a mechanic that creates a social environment (and a chance to be a jerk) to the game!

To win the game you are simply trying to collect a predetermined number of victory points depending on the number of players. This isn’t a large amount (only six), keeping the overall game time around 45 minutes. Fortunately there are a couple ways to earn points – that is as long as you aren’t turned into a raven! And that’s the other win condition – being the last human standing! 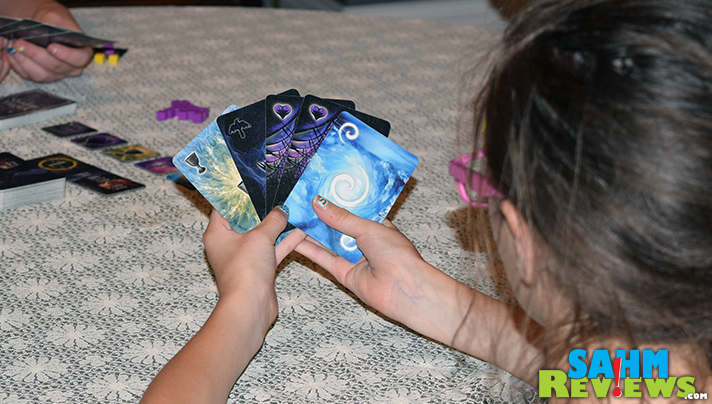 Instead of card suits and numbers, the main deck consists of five different symbols. Swords, hearts, a chalice, a ‘swirl’ and of course a raven. These represent “attack”, “heal”, “victory” and “radiance” respectively. The raven? Well, it’s a raven. 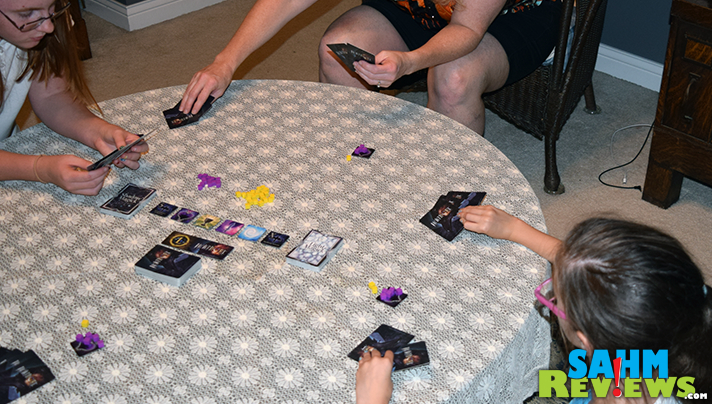 Each player is dealt five cards. You choose two to keep and pass the other three to the person on your left or right (depending on the current directional marker) and receive three new ones from the player on the other side. Now, pass two cards in the same direction. Then one. This is your final hand for the round. You are attempting to build a hand that has multiples of the same card, which will be used in the bidding process part of the round (which is next). 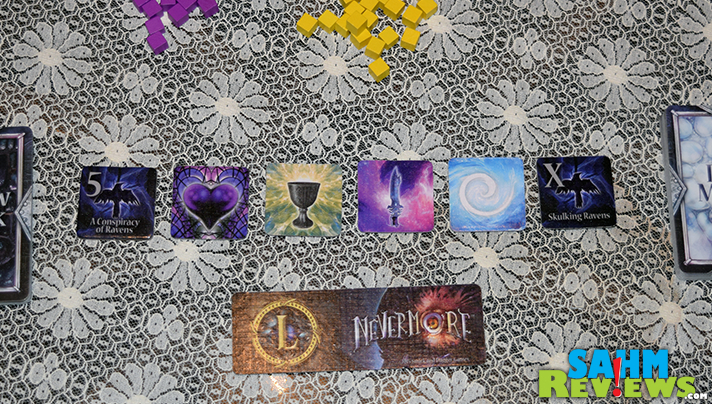 In the center of the game play area there are tiles representing the order in which the cards will be revealed. First it is determined if anyone has managed to collect five ravens. If so, the round it over (think of it like collecting all hearts and the Queen of Spades). But instead of waiting until the end of the round, you collect at the beginning by showing your cards. If you manage to accomplish this, you are allowed to draw one Shadow Magick card and do one point of damage to every other player. 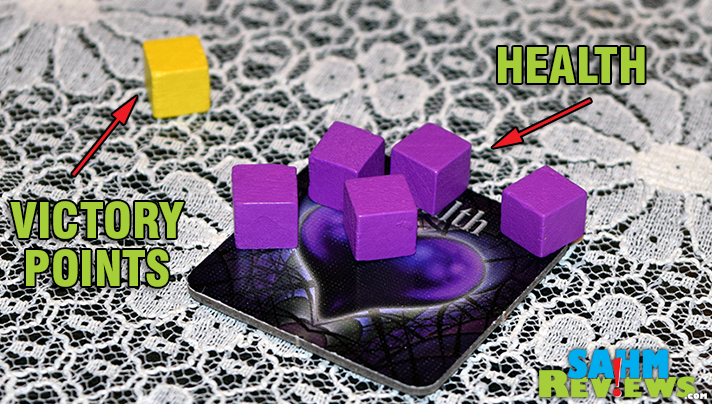 Wait, what? I didn’t mention that you would be attacking each other? Every player begins with five health (four in a larger game). Run out of health and you are turned into a raven! But your game isn’t over – you still continue to play as normal. Now your focus shifts to turning yourself back into human form as ravens cannot win the game, nor collect victory points. 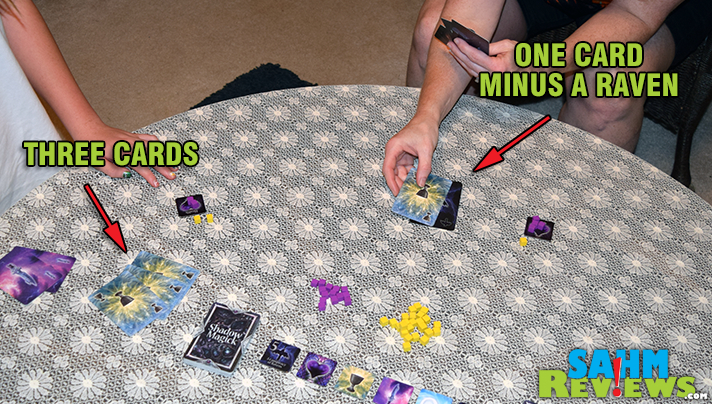 For each of the next four symbols (attack, heal, victory and radiance), players reveal their cards to determine who wins the trick. For instance, if one player has three swords, another has two and the rest have none, the winning player gets to do one point of damage to a player of his or her choosing. This amount is determined by the difference between the winner and second place. If two were to tie for first, they both would do damage (less the number in the 3rd player’s hand).

A quick note about ravens. They’re typically bad to have in your hand as they cancel out your good cards. You must play them with your other symbol cards, deducting one from your total for each raven played. Then at the end of the round, after all four good symbols have been resolved, any left over ravens allow you do draw Shadow Magick cards in the same quantity (less the number shown by the 2nd-highest). 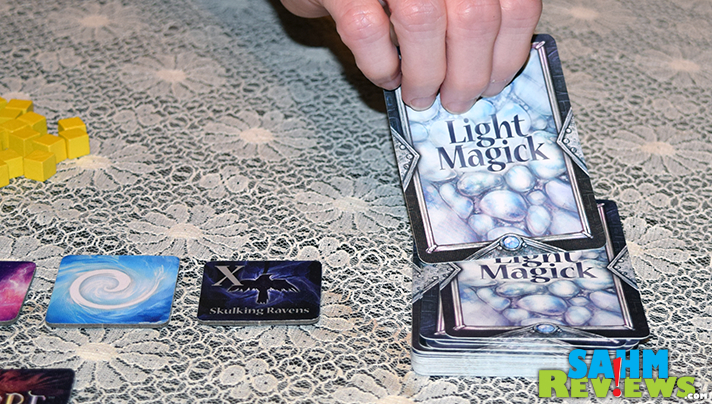 Shadow Magick (and Light Magick cards earned during the Radiance round) give you bonuses, let you steal or switch cards, allow you to skip the passing process and a number of other things that add an unknown element of surprise to the game. Some cards can only be played at certain times (denoted on the card itself), while you can spring others on your opponent at any time. The addition of these Magick cards is really what sets this game apart from your standard trick-taking title. What and when you play them can make the difference in a win or loss!

I’ve only touched on the general game play, but want to point out that Smirk & Dagger is one of the great companies that publish the entire rule book online for anyone to look at. Both so you can replace lost copies or really go through them to determine if the game is right for you. 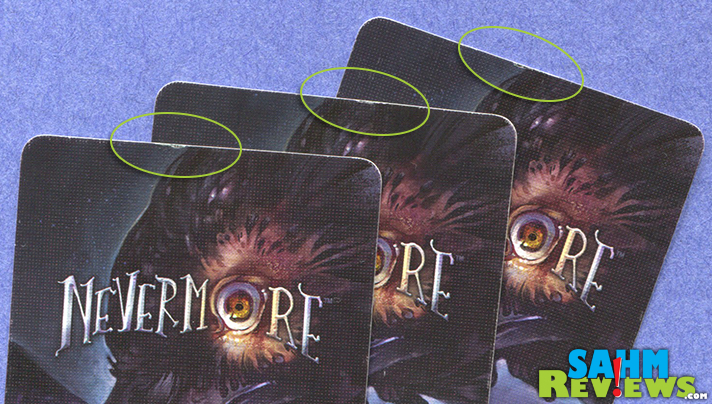 I have to mention one thing that did nag at me a little bit. The artwork is great, and the inclusion of thick tiles instead of cards for the center pieces is a perfect choice. I’ve mentioned before that my background is from the printing industry (credit & debit cards, etc.). Whenever you have full-bleed artwork on an item that will be handled a lot, care in the manufacturing process and selection must be taken to prevent abnormal wear. Especially with cards that are meant to be hidden from other players. This is one reason you almost never see full-bleed playing cards in a casino – they don’t want the ink rubbing off and inadvertently ‘marking’ the cards. We’ve played about a half-dozen games of Nevermore and are starting to already see some wear due to the cards being shuffled every hand. It’s very minor at this point, but because I see us playing this game a lot, I hope it doesn’t become more pronounced.

That minor issue aside, at under $30, Nevermore should definitely be in your repertoire of games to play with those that typically never stray from traditional titles. An ideal gateway offering, and at a price point perfect for gift-giving. Smirk & Dagger Games has completely sold out of the first publishing. They do have another round coming well before the holiday season, so if you’re on the fence, do not hesitate. I don’t expect the next batch to last very long either. Keep an eye on Smirk & Dagger’s Facebook and Twitter timelines so you know exactly when they’ll be in!

Late last year Smirk & Dagger began offering an expansion of sorts to their hit game of Nevermore. Specters of Nevermore is advertised as a Character Pack, but I like to refer to it as an upgrade kit.

Included in the thin box are twelve character cards which give players unique abilities to use while they’re a human, and a different one while they are a raven. Two are dealt to each person before the game begins, with each player choosing one and passing the other to their left. 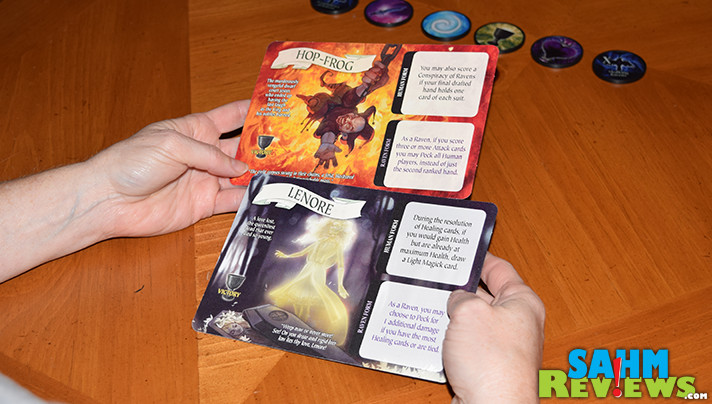 Once again, players must choose between their previously-kept card and the new one just handed to them. This final choice becomes their character for the game, with the rest of the cards being returned to the box. Special abilities range from being allowed to steal a Light Magick card from another player, siphoning health from the healthiest player or even skipping out on the “Pass 2” step of the drafting phase. 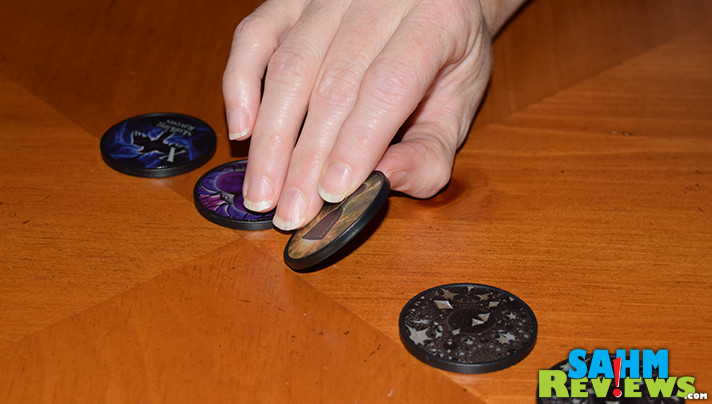 The original game of Nevermore included square cardboard tiles laid in the center of the play area. The Specters of Nevermore Character Pack upgrades these with six heavy clay “poker chips” with the same artwork. These are much easier to pick up from the table and flip, and give the game a more “deluxe” feel. Worth the price just for these chips!

At under $15, Specters is a great addition to the original game of Nevermore. Get yours now, as it does appear supplies are limited. You might say there will never be more!

26 thoughts on “Hearts & Poker for the Real Gamer”