There are a few ways that games come to market. There’s the traditional idea of selling your game to one of the very large publishers (Hasbro, Milton Bradley, etc.). You’ll also hear a lot about Kickstarter, where 100’s of games have found great success by pre-selling copies before they are made. And then there is the old tried-and-true method of manufacturing them yourself and attempting to sell your own inventory.

The latter is by far the riskiest and most capital-intensive, but can also be the most rewarding. Without any middlemen in the picture, the designer can either recoup a larger portion of the revenue or provide better components at a cheaper price. Either way, it is still a long-shot.

That’s the path NateCo Holdings took with their game, Middle Empire. Self-described as a cross between Settlers of Catan and Risk, we found the claim of a 30-minute game to be spot-on. Let’s take a look at what in entails.

Each player represents an army expanding their influence across the Middle Empire. To do so they must build strongholds, construct new roads and establish their empires while preventing the other armies from doing the same. 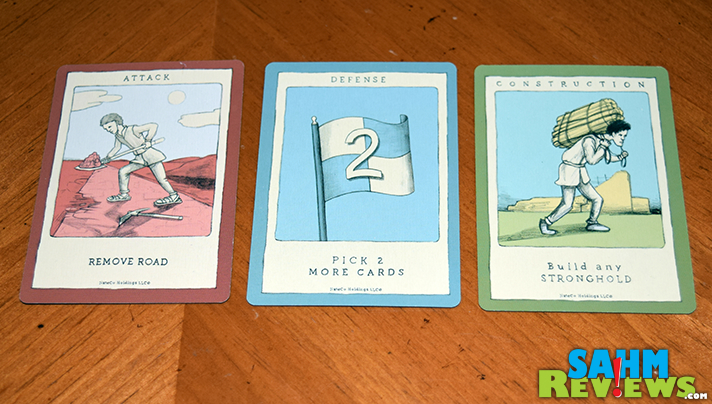 On your turn you can draw up to two cards, remembering your hand limit of seven cards (at the end of your turn). You can play up to three cards per turn, but no more than one of each kind. Place your stronghold, build a road and maybe attack a neighbor – then your turn is complete.

To win the game, you must establish and defend three (or 4 in a two-player game) empires. Empires are created by building in an area in which you already have a stronghold – this simply upgrades them to empire status and takes two coordinated attacks to defeat (as opposed to just one for a stronghold).

You can also build a city wall around your empire (another defense card item), further protecting it from attack. Roads provide defense along with a path to your neighbor so you can attack. In the base game, roads can only be traveled upon by the person that owns them. In the optional rules, you can allow anyone to utilize (or move) them at will. 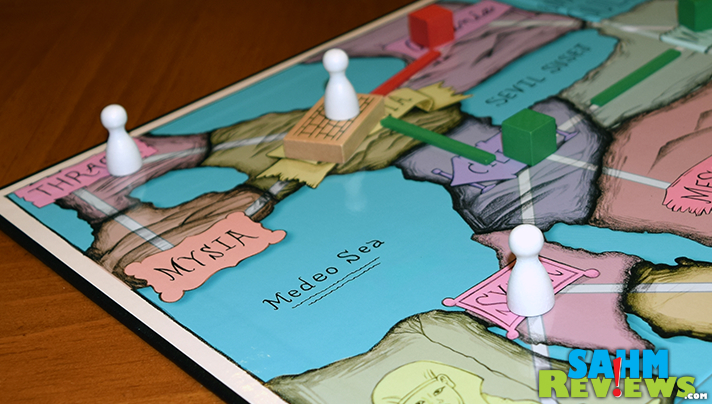 Players take turns drawing and playing until one player erects their third empire. They must then successfully defend it for an entire round before being declared the winner. Middle Empire rules are very easy to explain or demonstrate, making it a great introductory game for families introducing themselves to more advanced strategy titles. 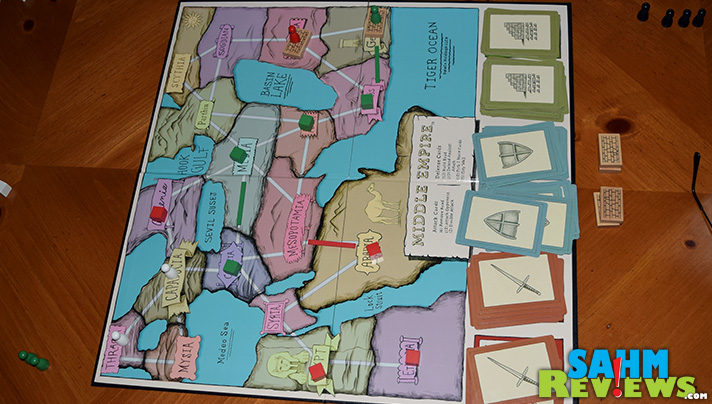 But here’s the one downside of Middle Empire. It isn’t pretty. You can make your own judgement about the artwork, but we found it to be the one obvious area the game suffered. I’m no artist, and can barely eek out a stick figure, but for a few hundred dollars an art student could have been hired to dress up the box, board and cards (basically everything). I joked in the photo at the top about the art, but after showing it to others, they agreed one of the main characters on the lid also reminded them of Butthead.

Overall though, I wouldn’t let that be a deal-killer. Middle Empire in its current form does lack the shelf-presence that it would need if retailed at a hobby shop. But for a game that you can order direct from the creator for under $20, the game play and good balance more than make up for the lack of high-quality art.

And thank to the generosity of NateCo Holdings, you can win a copy of Middle Empire for yourself right now! We’re giving away TWO copies to TWO different winners! Enter using the form below and don’t forget to come back tomorrow for additional entry opportunities!
Middle Empire Game Giveaway