Over the years we’ve played a lot of card games. And I mean A LOT of card games. Some are trick-taking like Nevermore or Custom Heroes. Others are variations of classic games like UNO. And some are well-designed set-collection challenges like Herbaceous. It isn’t often that we come across a card game that introduces something new to us. But at this year’s Origins Game Fair we found one that turns the idea of collecting matching cards on its head.

While admiring a prototype of the upcoming Teotihuacan: City of Gods at the NSKN Games booth, we noticed something different. A small-box game looking overcrowded among the much larger titles that NSKN Games is typically known for. Maybe because we’ve been enjoying our new puppy (and were missing her while we were at the convention), we were instantly drawn to the fact that Scare It! featured dogs among three other animals.

Designed by Strawberry Studio, Scare It! is a quick 20 minute card game for up to four players (eight players can be accommodated with special included rules). Included in the travel-friendly box are 32 animal cards, four animal color objective cards and four animal type objective cards. Each player is dealt one each of the animal color and type objective cards, which they keep hidden from other players. This will dictate which color and animal type that player will score at the end of the game. 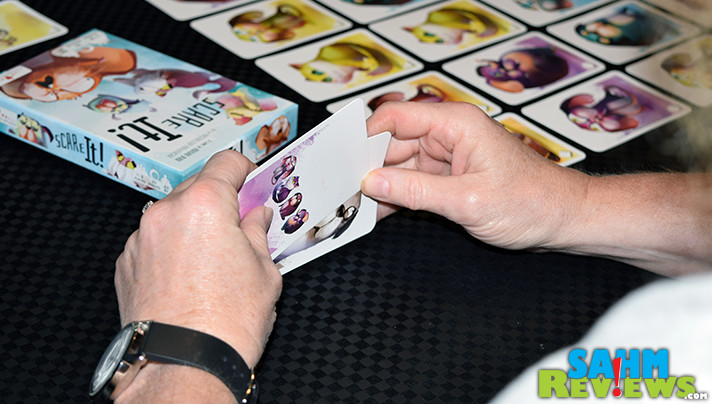 The 32 animal cards are all dealt out face-up to the center of the play area in a 4 x 8 grid. In addition to dogs, the cards depict cats, mice and elephants. As you might have guessed from the name of the game (Scare It!), each animal type will scare one of the other types. Dogs scare cats, cats scare mice, mice scare elephants and elephants scare the dogs!

On each players’ turn they will choose one card in the grid and use it to ‘scare’ another animal orthogonally adjacent to it following the above scare rules. That animal is then removed from play and returned to the box. The active animal then either remains in the same spot or moves into the recently-vacated space (active player’s choice). Any spaces remaining in the play area are filled by moving cards down from above to fill the void. 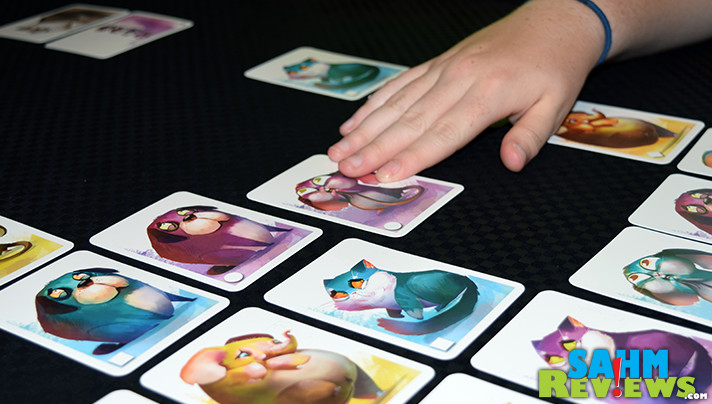 Players take turns choosing an animal and scaring another one until either one entire column is removed from the game or there are no more animals to scare. At this point everyone reveals their hidden objective cards and scores are tallied. Receive one point for every animal left on the board that matches your color objective and one point for all matching animal types. The player with the highest total wins Scare It! 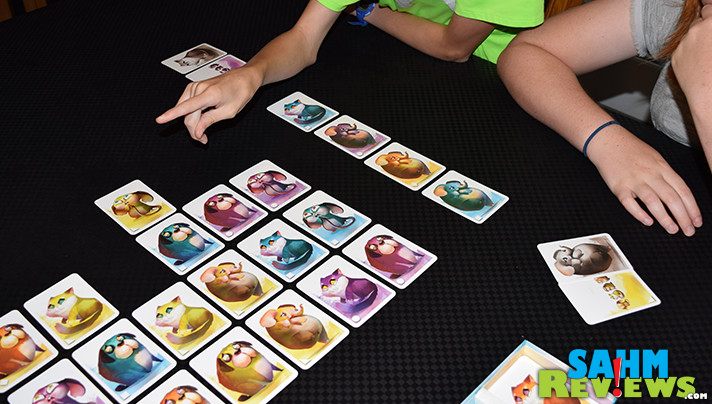 As I previously mentioned, most card games we’re familiar with have you scoring on what you collected, whether it is a set or a trick. In the case of Scare It!, you’re scoring what you left behind as long as they match your objectives! I won’t go as far as to claim it is the first time this has been done in a game, but it is certainly our first experience with this mechanic! It adds a fresh perspective to an overcrowded genre!

Surprisingly, you can scare up your own copy on Amazon for only $10 shipped or direct from Strawberry Studio on their website. Be sure to check out both NSKN Games’ other well-known titles and follow them on Facebook or Twitter to find out when their next title hits the market. If you like what you see in Scare It!, Strawberry Studio also maintains their own Facebook account where you’ll find out more about where they’ll be bringing their games to next!

Don’t you just love games about cats and dogs?!