Less than a week away, we can’t be more excited about travelling to the annual Gen Con convention this year. What better place to spend four days with 70,000 of your closest friends?! We’ll discover new games, pick up ones from our long wish list and get previews of new titles slated to hit the shelves later this year. It’s a wonderful time to be part of the board game industry.

A few days ago we talked about how one of the perks of this hobby is getting to know (and play) games well before their street release date. Hanamikoji is a fantastic 2-player card game that will make its retail debut at Gen Con, and one we previewed last week. And if you’ve been following along, we listed nearly 150 brand new games that will make their grand entrance as part of our 2018 Gen Con Game Debuts series. Today we want to talk about another stunning game, Dino Dunk, being offered by a brand new publishing company, Twin City Games. And although we’ve talked about sports-themed flicking games in the past (Zoo Ball), Dino Dunk offers quite a different experience over that football-themed dexterity game.

In Dino Dunk you command a team of dinosaurs in a rowdy game of basketball using a dinosaur egg as the ball! And since there were no official basketball nets back then, you must get the ball into the top of an active volcano. Maybe this is the real reason dinosaurs became extinct! 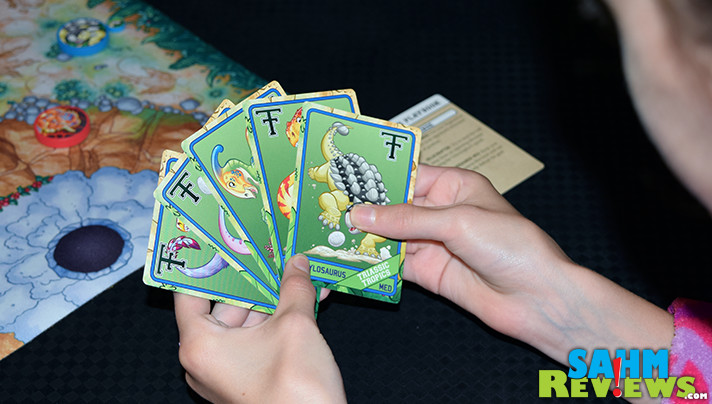 From a pool of ten dinosaurs each, players will choose a total of five to make up their team. A starting player is decided and that person chooses which of their dinosaurs will start with the ball at the end of the “court”. And by “court” I mean either side of the double-sided neoprene mat. One side is called “Tropic Turf”, while the opposite is named “Crater Court”. No matter which side you elect to play on, the rules remain the same.

The starting player then places their other four team members anywhere on their side of the mat, while their opponent places all five of their team anywhere on their side that they choose. The token representing possession is placed on the score board to keep track of the shot clock (number of turns you have to make a shot). Play then begins with the first player taking the first shots. 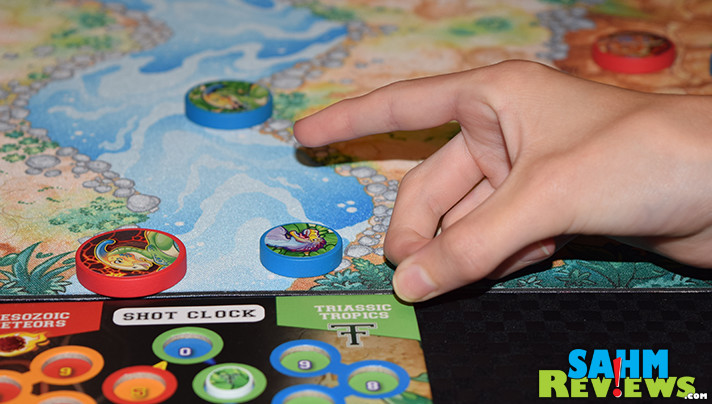 On a turn you will take two actions with two different dinosaurs. You may move by flicking the dinosaur’s disc, pass the ball by flicking the ball token, shoot towards the volcano again with the ball token or if close enough, attempt to dunk it! After two actions, the shot clock token moves and your opponent gets a chance to reposition by moving (flicking) two of their defenders. They must be careful as if they hit the disc of the dino holding the ball, they commit a foul. But if they are able to hit the ball without touching the handler, they successfully steal possession! 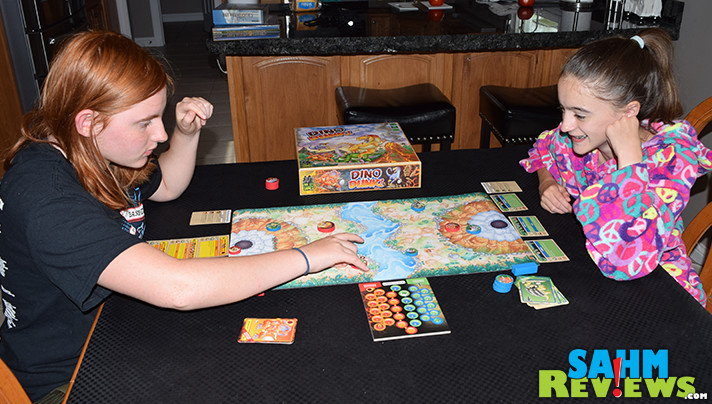 Fouls in Dino Dunk are handled in the same way as a real game of basketball. When fouled, the ball handler gets one chance to immediately shoot to try to make a goal. If they miss, they get two foul shots from the designated line. If they make their shot, they still get one try at the foul line to make a 3rd point! After the defense has taken their two actions, the offense activates again. If at the end of their turn the shot clock has run out, then possession reverts to the defense and the roles now reverse! 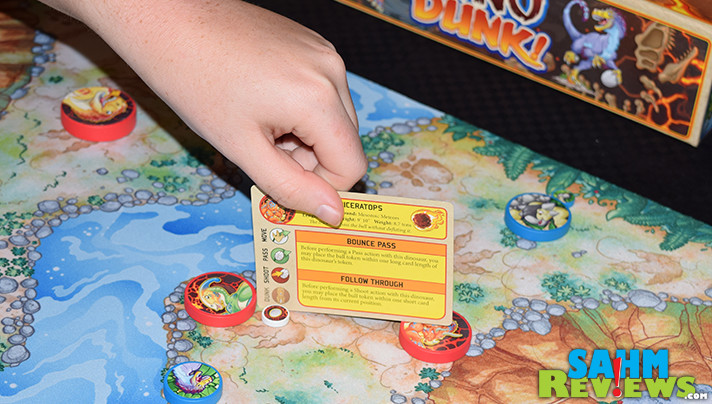 There are quite a few things that makes Dino Dunk very different from other games in this genre. First, there are the different dinosaur types. Varying species have different abilities. For instance, a T-Rex might be tall, but he can’t shoot due to his tiny arms. So he’s only good at dunking! While the Velociraptor cannot shoot at all – he’s best for ball-handling and swift movement. 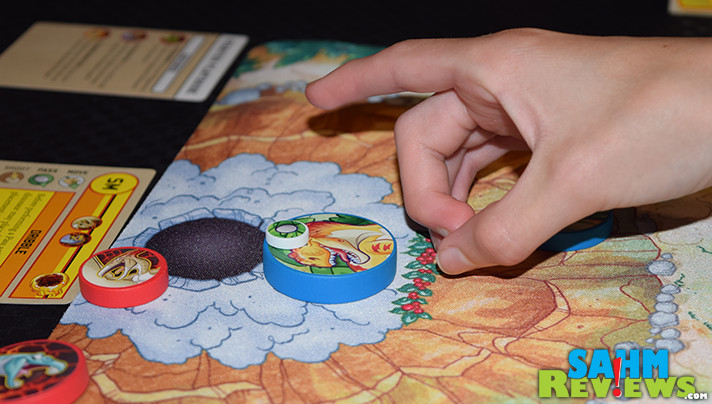 And then there’s the shooting. Most games have you just shoot the player disc. None really have a separate ball you must contend with. It can be rather difficult to accurately flick such a tiny disc, especially when shooting. Scoring is unique in that you either have to get the tiny disc anywhere into the circle representing the volcano’s top or perform a slam-dunk to guarantee a score. These are done by placing the ball disc on top of the dinosaur disc and shooting them both towards the hole. If you are able to get the larger dino disc to stop (and touch) the hole without the smaller disc falling off of it, you successfully complete the dunk! 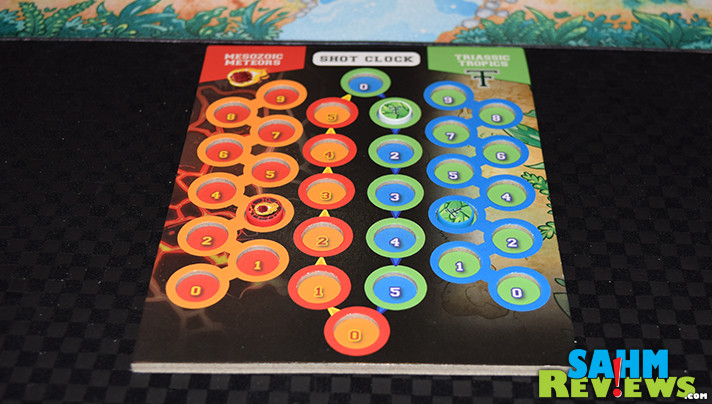 Component quality in Dino Dunk is above what you would expect of a game in this price range. Stickered wooden discs, a double-sided neoprene mat and a substantial double-layered score track means you won’t wear out any of the pieces, even with kids being rough on the game. Typically played until one player scores six points (about 30 minutes), there are also rules to either make the game simpler by removing individual dinosaur abilities or adding a backboard to the court, or add a layer of complexity by introducing layups. 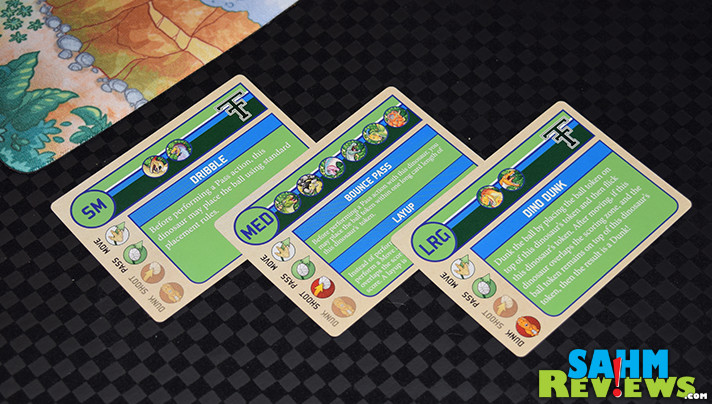 Dino Dunk will make its retail debut at Gen Con next week or you can order a copy on Amazon or direct from the publisher for around the $40 MSRP. If you’re headed to the convention, be sure to stop by booth #1906 to get an in-person demonstration, possibly by the designer himself! If you aren’t lucky enough to be headed to Indianapolis, ask your friendly local game store if they’ll be getting copies in soon! Alternatively, shoot Twin City Games a tweet on Twitter to find out where you can buy it from!

Which do you prefer, basketball or football?