Something we’re always excited to talk about are games that aren’t out yet. One of the perks of working for SahmReviews is we often get the opportunity to sample a game before it hits the retail market. And if you’ve been paying attention for the past few days, you’ve seen nearly 150 examples that are making their grand retail debut at this year’s Gen Con convention in Indianapolis, IN. We’ve been fortunate to get our hands on a few of these hot titles in advance of their debut and have selected a couple to make sure you know about so you can add them to your short list of games to pick up while you’re there. 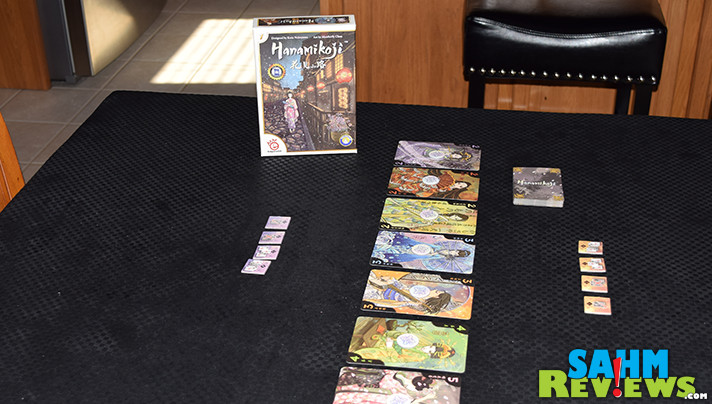 Our first feature hits on all the right points for us. Great artwork – check. Affordable price – check. Travel-friendly size – check. 3rd party recommendation – check. Fun to play – CHECK! Hanamikoji is the latest offering by Deep Water Games and the ninth title in their current line. Known for importing popular titles from the Far East, Hanamikoji is the first in the series to be awarded the Seal of Excellence by hobby game stalwarts, The Dice Tower. 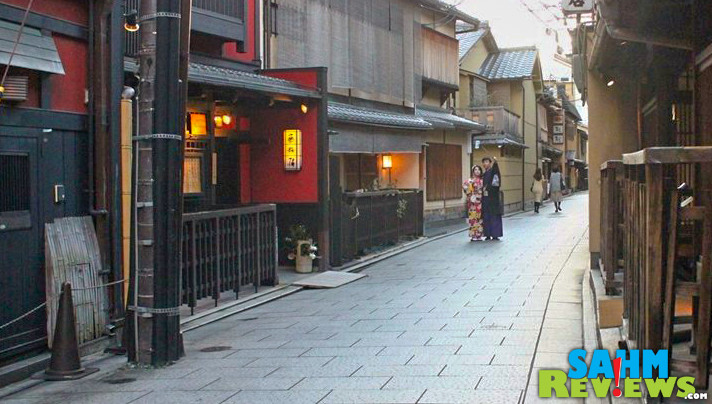 Let’s talk a little bit about the name of the game. At first you might think Hanamikoji is an English pronunciation of a Japanese word, while in fact it is a famous street in Kyoto. Hanamikoji has become somewhat of a tourist attraction recently as an ideal spot to snap photos of authentic geisha amidst the surroundings of preserved wooden buildings and tea houses. Many of these structures have been in place for hundreds of years and are worth the visit, even if you aren’t lucky enough to spot any geisha.

Geisha are Japanese women who study the ancient tradition of art, dance and singing, and are distinctively characterized by traditional costumes and makeup. The Hanamikoji game is a tribute to those geisha in which two players are vying to earn their favor by collecting each geisha’s preferred performance item.

Inside the box you’ll find 7 Geisha Cards, 21 Item Cards, 8 Action Markers (four for each player) and 7 Favor Markers. Setup is done very quickly by laying out the seven Geisha Cards in numerical order within easy reach of both players. The seven Favor Markers are set in the middle of each Geisha Card (one per card) and the Action Markers are given to both players. The youngest person is the first player and they will remove one of the Item Cards from the deck, put it back into the box and shuffle the remaining cards. Six cards are then dealt to each person and the first player begins their turn by drawing one additional card from the remaining deck of Item Cards. 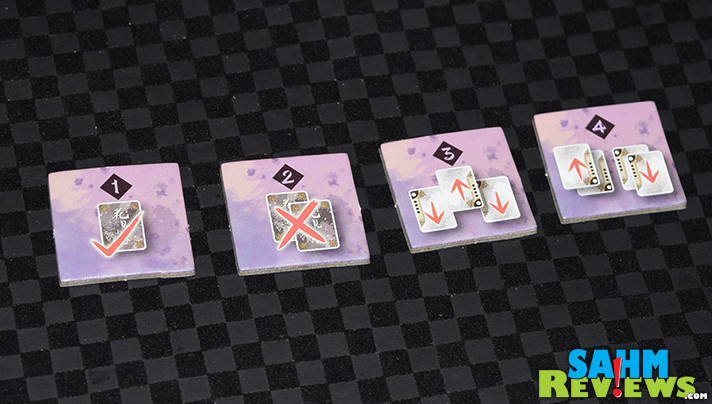 Your four Action Tokens represent the choices you’ll have for the round. On your turn you will choose one of the tokens and perform the listed action. You may choose any action that has not been previously performed in this round and is signified by the color side of the tile being face-up. (Both players will eventually execute all four action options during the round.) 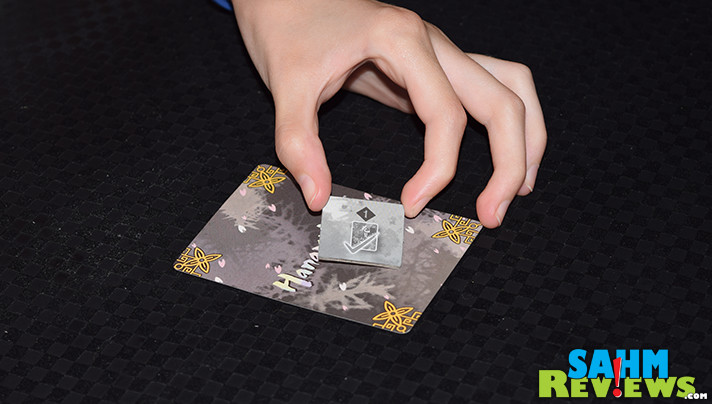 Of the action possibilities, you may select a card from your hand and place it underneath the token, saving it for scoring later. A second action option is to choose two cards, also placing them underneath the designated token, which discards them from the round. 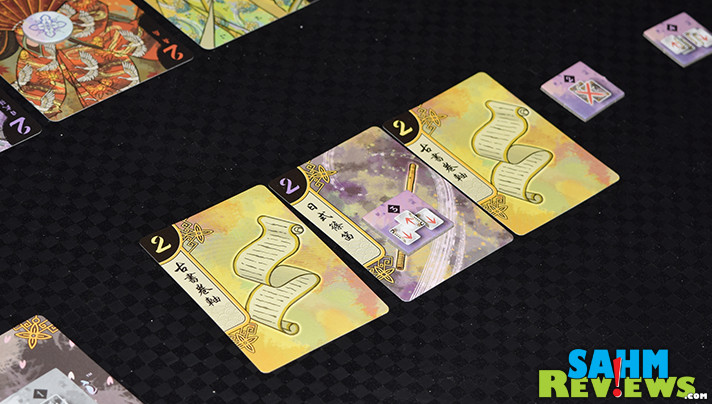 The third and fourth actions are the two that introduce interesting choices (and angst) to the game. Select three cards from your hand, lay them face-up in front of you and allow your opponent to choose one and place it in their tableau, with you placing the other two in your own area. The fourth requires four cards, which you divide into two sets of two, and then allow your opponent to choose one pair (with you keeping one) and each of you adding them to your collection.

Your personal collection of items are lined up with their matching geisha on your side of the play area. After both players have completed their four actions, the hidden card that was saved for later (action #1) is also added to each tableau and scoring is determined. Any geisha that has more cards on one side than the other has their Favor Token slide to the end closer to the winning player. If tied (or no cards presend), the token does not move. 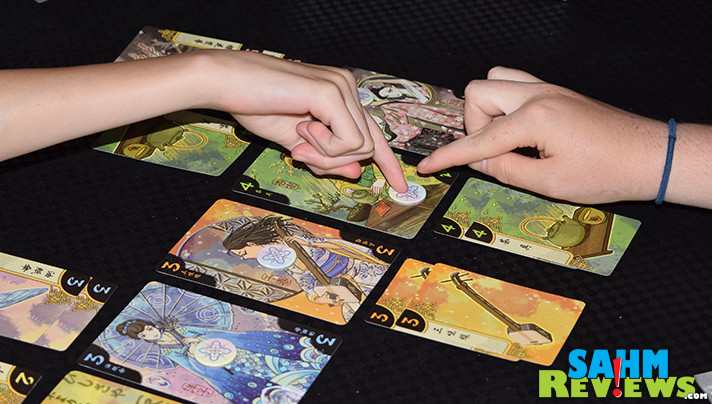 To win the game of Hanamikoji, you must have the favor of four geisha or favor totaling 11 points or more (each geisha has a different value listed on their card). If no player has obtained either, all Item Cards are collected, including the one from the box, and a new round is played. The position of the Favor Tokens is not changed and winning criteria remains the same. However, in order to win the favor back of a geisha that you have lost to your opponent, you must have majority of that item – a tie will not take it from them.

Up to three rounds are played with the first person to successfully complete one of the winning criteria winning the game. If both players obtain one in the same round (one person has the favor of four geisha while the other has more than 11 points), then the person who completed the point task is considered the winner. After three rounds, if no player has won outright, the person with the highest number of points at the end of that third round is victorious! 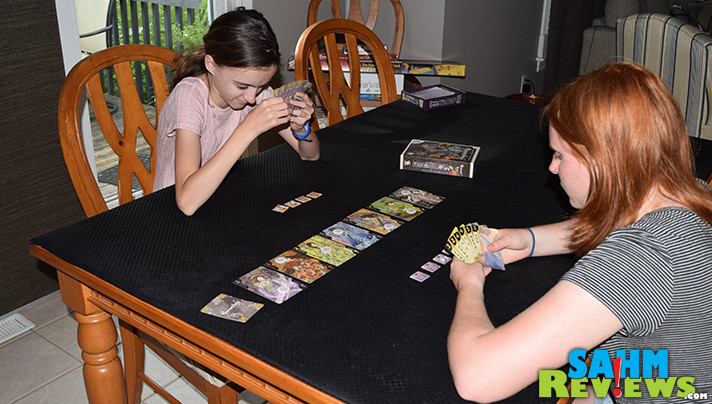 An entire game of Hanamakoji plays in around 15 minutes, including setup. Easy to teach and a LOT of decision-making required, you will probably find Hanamakoji as thought-provoking as we did. Considering which cards to offer up in the 3- and 4-card actions can make or break your strategy. Hide the wrong cards too early and you can’t get a majority with the geisha you need. Fortunately your opponent has the exact same decisions to make, which keeps the game close at all times!

Hanamakoji makes its retail debut at Gen Con in a couple weeks and you can preorder your copy on Amazon or direct from Deep Water Games for under $20! This won’t be the last game from Deep Water you’ll hear us rave about, so in the meantime follow them on Facebook and Twitter to find out exactly what their next release will be!

Have you ever visited Kyoto?