We’ve been attending our weekly game night meetup for three years now. I still remember those first few visits, not knowing anyone there (and dragging the family along in case no one wanted to play). We had limited experience in this new world of hobby board games, only having tried some popular ones like Munchkin and Dominion. We were completely overwhelmed by the games the other brought. None of which we had seen before.

I don’t remember all of them, but a few stick out in my mind. Settlers of Catan, Castles of Burgundy and Castle Panic were but a few we tried in those first few weeks. There were scores of others being played those nights, and with nearly 60 people showing up on a regular basis, we could count on an ever-changing landscape of games to play. 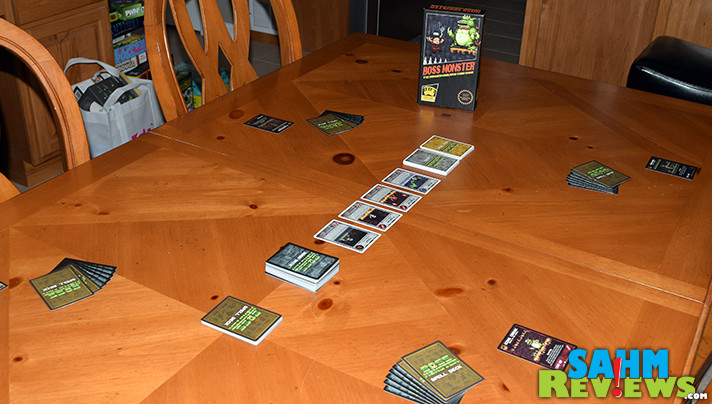 One of the smaller games that caught my eye was on a side table being played by only two people. I guess it was the art that captured my attention. Styled after 8-bit arcade graphics, Brotherwise Games‘ Boss Monster was one I watched from afar and never got a chance to try it out. A couple months later the person that owned it moved out of state.

I never forgot the game, wondering what it was really about. This year at the Origins Game Fair I stumbled across Brotherwise Games’ booth where they were demo’ing both Boss Monster and another brand new release. They were even handing out a special promotional card for the game, and it was then I knew I needed to sit down, get a personal demonstration and take a copy home with me. And here we are.

If you’re like me and grew up with blocky, pixelated video games from Atari, IntelliVision, ColecoVision, Odyssey, etc., then you will love the styling of Boss Monster. This game tries to recreate the best part about playing video games on those systems, the final boss fight. But instead of taking on some overpowered monkey or wizard, you play as the Boss Monster himself trying to vanquish all the heroes who dare enter your dungeon!

Boss Monster is a card game for up to four players and lasts only about 30 minutes. Each player is their own monster, building a dungeon out of cards which the town’s heroes will enter, trying to steal your treasures. At the beginning of the game, each player is randomly dealt a card from the Boss Deck. This determines which monster you will play as, each with their own special abilities and power. 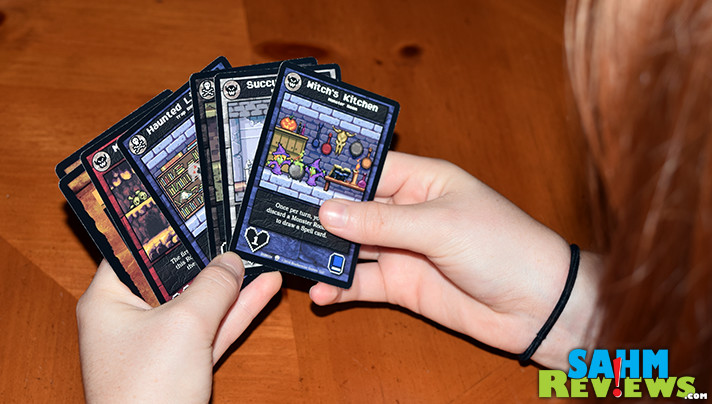 You’ll also receive a hand of five Room Cards along with two Spell Cards from their respective decks. Each person immediately builds one room of their dungeon by placing one of the Room Cards to the left of their Boss Monster (imagine this is a side-scrolling game, where the hero enters from the left, works his/her way through the dungeon and eventually meets the final boss in the last room on the right). 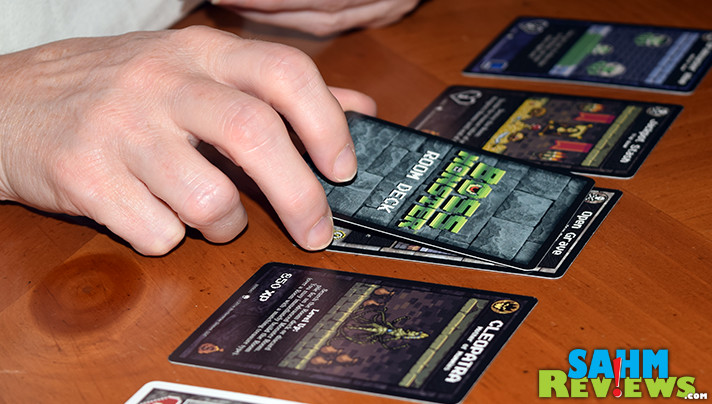 The middle of the table represents the town – this is where the heroes gather. Each round a number of new heroes will appear in town, equal to the number of players in the game. On your turn you may build one additional room, taking turn in order by the number that appears on each person’s Boss Monster card. You may build to the left of your current dungeon, adding to the room count (your dungeon can hold up to five rooms). You can also choose to build on top of another room (remodel), or if you drew an Advanced Room, upgrade an existing one by matching the treasure symbols on each card.

After all monsters have had a chance to build out their dungeon, the town’s heroes move to the entrance of the dungeon with the highest number of matching treasure symbols as on the hero cards. If none of the dungeons have the treasure that particular hero is looking for, or if more than one dungeon is tied for the highest, the hero remains in town until the next round. 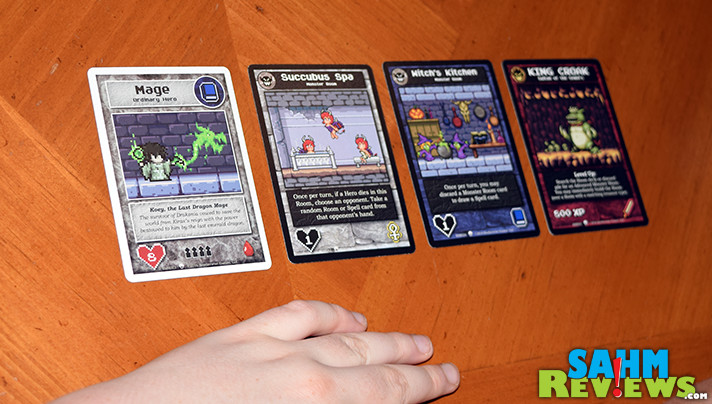 Once all the heroes have been assigned to their dungeon, they make their way inside. Each room they encounter will do damage to them, the amount noted on the bottom right of the Room Card. Rooms also may have actions that need to be resolved when a hero enters. Players may also use their Spell Cards at this point to help them stop the hero’s advance. 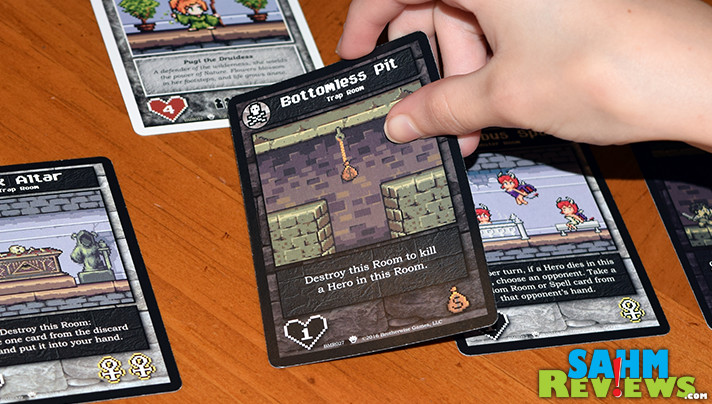 If the hero exits a room with damage equal to or exceeding its health, it dies. That card is collected and placed face-down to the right of your Boss Monster. If the hero reaches your monster without dying, it wounds you. That card is also collected and placed to the right of your monster, but this time is left face up. Each hero has a number of Souls (if dead) or Wounds (if alive) – collect ten Souls to win or be eliminated by receiving five Wounds!

Rounds continue with new heroes entering the town, rooms being built, changed or upgraded and heroes entering dungeons that have the treasure they’re after until at least one Boss Monster has collected ten Souls or is the last monster still alive. That player is the winner of Boss Monster!

If you remember how excited I was to play the new Space Invaders Dice a couple months ago because of the memories it brought back, then you’ll understand why I feel the same way about Boss Monster. It’s not overly complex, very easy to teach and can be played by almost any age. It will have special appeal to those of us that grew up with (and still love) those early video games.

You can find your copy on Amazon for under $20 shipped or direct from Brotherwise Games in their online store. They’re beginning to talk about their latest game, Unearthed, over on their Facebook and Twitter feeds, so go subscribe so you can find out what it’s all about!

Were you around when 8-bit video games were considered state-of-the-art?