Do you remember the first video game you ever played? I’m not talking about something at home – I mean a real quarter-sucking cabinet down at the local arcade. I do. We were living in West Germany in the late 70’s and the place to hang out was a small bowling alley right outside the military base in Worms. Our DYA (Dependents Youth Association) held lessons and leagues there weekly, but my interests were focused on the two pinball machines near the front door. I missed a lot of turns on the lane because I had a great streak going.

Then one day one of the pinball machines was gone. In its place was this upright game with a television instead of a pinball field. I had seen nothing like it. Occasionally we would run across a game of Pong, but this brand new game with a joystick was new territory to me. And I had no idea how many quarters it would steal over the next year, but I knew they would be worth it. This was my very first experience with Space Invaders and wouldn’t be the last.

A few years later Atari announced that Space Invaders would be coming out for their 2600 game system. It was the hottest game of that holiday season and my parents somehow managed to get a copy shipped to us in West Germany in time for Christmas. Years later I found out both my mom and dad opened the package and played it many times when my brother and I weren’t home, before wrapping it as a gift! Little did they know that we found said gift and carefully cut the tape to be able to play it when they weren’t around. I’m surprised they didn’t catch on when we opened in on Christmas day and were already near experts!

It is now nearly 40 years later and we just discovered an entire line of Space Invaders-themed items from Turn One Gaming Supplies, including their brand new Space Invaders Dice game! Talk about a nostalgic flashback, and one that is a whole bunch cheaper than those stacks and stacks of quarters I ran through.

For the fan of the game, these dice can serve as replacement dice in any game of your choosing. For under $8 shipped, you get six standard-sized black dice with each pip represented as one of the invading aliens from Space Invaders. 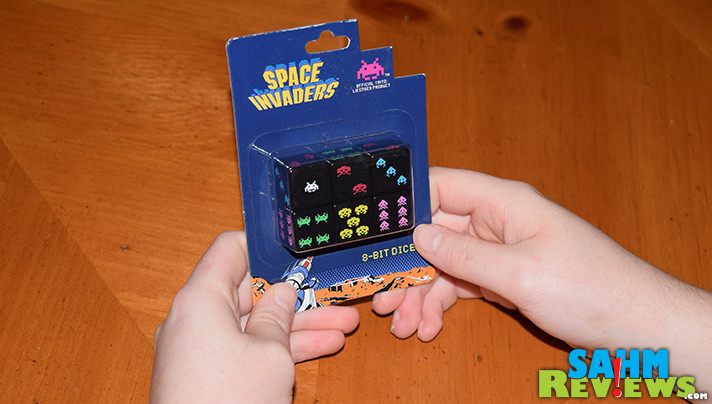 We’ve particularly enjoyed using them in games utilizing themes other than aliens. Why? Because nothing bothers your opponents more than bringing an alien to a cowboy game! 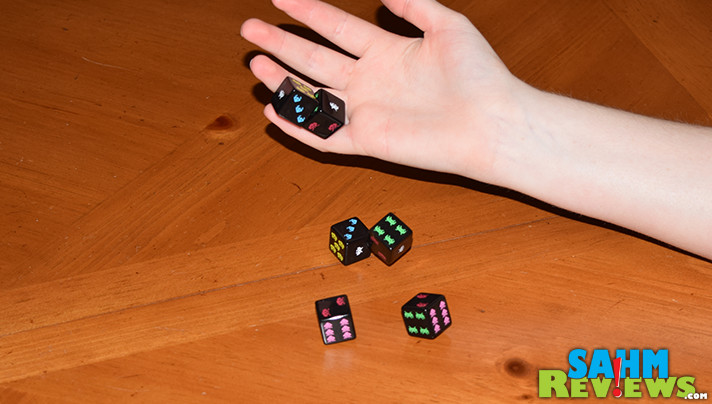 We’ve recently begun putting sleeves on cards in games that see a lot of table time. My oldest daughter challenges her cousin to a couple rounds of Magic: The Gathering each time we see him during the holidays. We’ve found that the vast majority of card sleeves for Magic skew towards the fantasy theme, many not appropriate for a teenage girl. Other than those, the solid colors are just too bland. 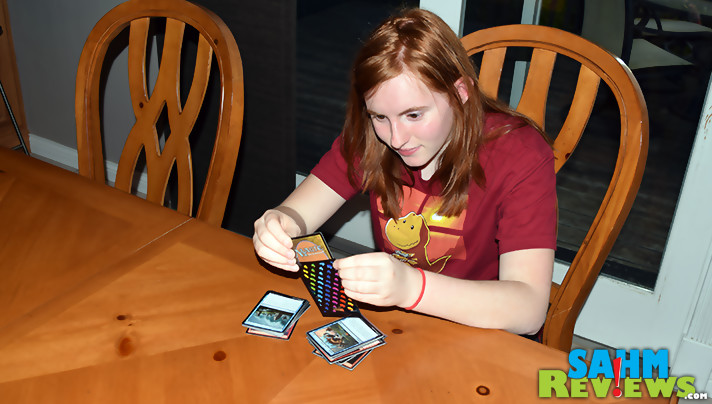 My daughter is as much of a video game geek as I was (am), so Turn One’s line of Space Invader-themed card sleeves were absolutely perfect for her. She may not have played the original stand up arcade game, but she knows the license well, even the fact that the UFO’s can be worth different values depending on the number of the shot you hit it with. 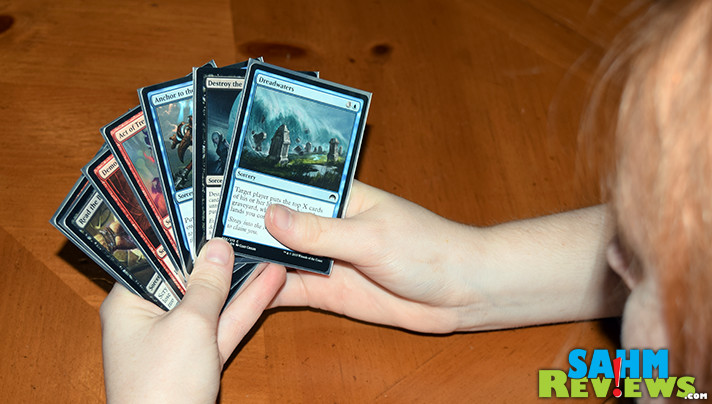 But this is the product we were most excited to try out. We’ve been fans of games by the designer, Daryl Andrews, for quite some time. Most recently we featured his Back to the Future Dice Game, but have also highlighted Fantasy Fantasy Baseball and Caffeine Rush. Last week we also had the chance to play one of his newest, Sagrada, at Geekway to the West. That’s another one we hope to be able to show you very soon! 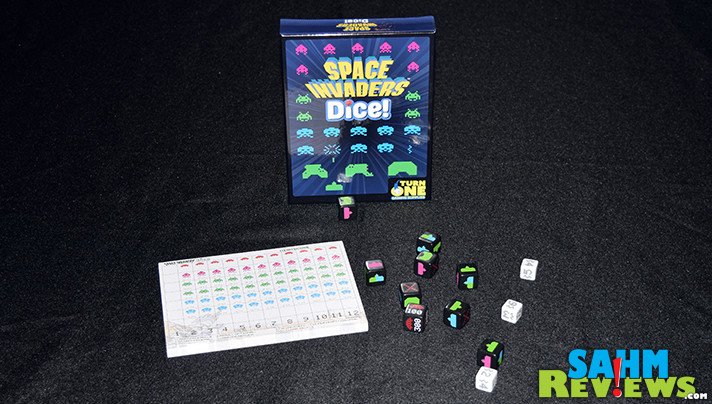 Designed for 1-4 players and each game taking only 15 minutes, Space Invaders Dice does a fantastic job of recreating the feel of playing that old arcade game. In the box is a custom pad to be used for each player and a dozen custom themed dice. 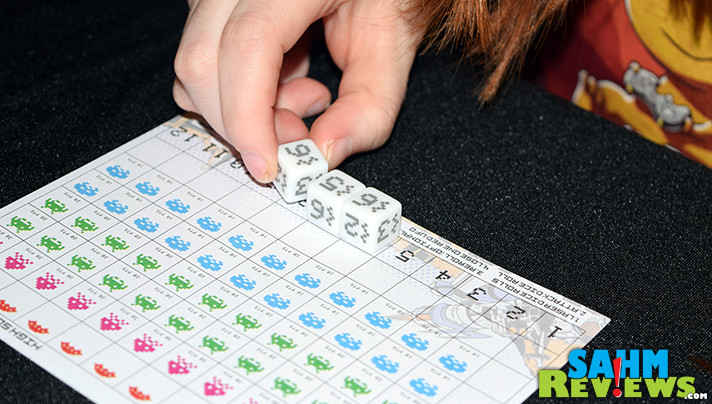 On each players’ turn they first roll two of the three laser dice, placing one of them on the bottom of the column matching the sum of both dice. Grabbing the other laser die, they again roll and place one on the matching sum. The last die is then rolled and also placed on the matching column. These represent columns that may not be attacked on this turn. 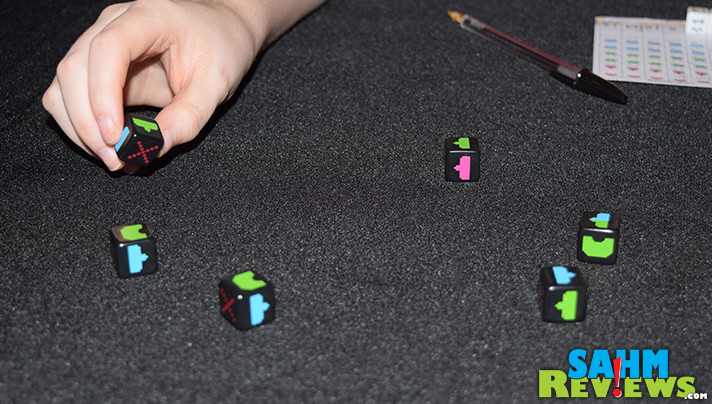 Next the eight attack dice are rolled. Using the results, you cross off matching invaders of that color. A pink invader cannot be cleared until the blue and green ones underneath it are taken care of. Once an entire column is defeated, you may use any color die to shoot the UFO at the top, rolling the UFO die to find out how much it is worth once dead. 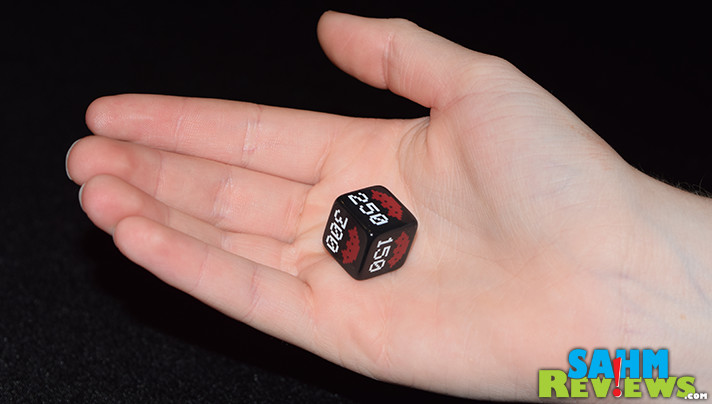 Just as in the original Space Invaders game, the aliens move quickly. Each turn you must cross off one of the empty spaces on the pad, one UFO space (because they’re fast and fleeting) AND another for any dice you weren’t able to use that round. You can always elect to reroll your dice once, but any unusable dice after the reroll forces you to mark off two spaces for each one. There are only 18 spaces on each piece of paper… To make matters worse, for every two empty columns on your score sheet you lose one of your dice in the next round! 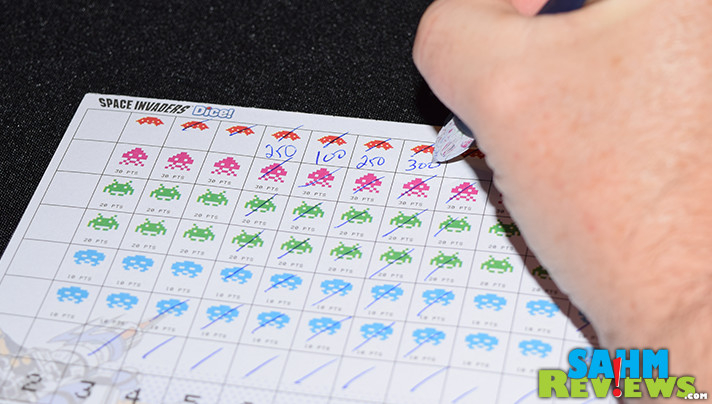 Once your entire page is filled with either X’s, denoting you killed them all, or all 18 of the empty boxes are filled, your game is over.  Total up the point values for the aliens you did kill, adding in the values of any UFO, and that gives you your final score. The player with the highest score wins! And just as in the arcade version, you can keep track of your high scores from game to game, trying to best yourself!

Of all the dice games at this price point, Space Invaders Dice is going to give you the best value for your money. Not only is the game play solid, the addition of a genuine Taito license means it will appeal to more than just the board game crowd.

There are a number of ways to purchase a copy, the cheapest being one that you have to jump on! Right now you can pre-order Space Invaders Dice directly from Turn One Gaming Supplies on their website for only $16.99 with shipping included! But you have to hurry, as the pre-order window expires on May 29th! After that, check with your local game store or pick up a copy on Amazon. Be sure you’re following them on Facebook and Twitter to find out which of your local stores are carrying Space Invaders Dice and to see if they’ll pick up another classic video game license in the meantime!

Do you remember playing the original arcade version?