Have you ever played a game by CSE Games? If you’ve ever had the opportunity of playing one of the variations of Spot It, then you have. Back in 2013 we met them at ChiTaG and received demonstrations of Grid Stones and NHL Fast Track, two of their newest titles at that time. Their abstract game, Quartex, was a recommended buy in last years 10 Games Under $29 gift guide. I guess you could say CSE is no longer a new kid on the block.

For their latest venture they are taking a new route – Kickstarter. Because Fantasy Fantasy Baseball is targeting new markets for CSE (hobby gamers), they elected the crowdfunding route to make sure there was enough interest in the theme before proceeding to manufacturing. And to hedge their bet, they made sure to utilize two up-and-coming game designers with proven successes. 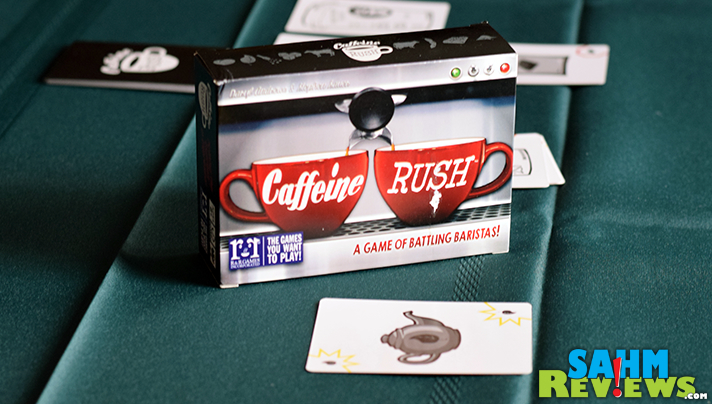 Daryl Andrews has two games on the market, the most well known being Caffeine Rush published by R&R Games. In this barista-themed title, you race to place your ingredients next to drink orders. On each turn, all players flip over two Order Cards, which have a list of ingredients on them needed to complete the recipe, and place them to their right (between them and the next player).

Each player can only use one hand with the other remaining behind their back. As fast as you can you try to find ingredient matches for the drinks on either side of you, placing your card next to the order. Ingredients can be played in any order, but the person who contributes the final ingredient yells “Order up!”, grabs the drink and matched ingredients, and claims them by placing them face-down in your prep area in front of you. Each completed drink counts as your ‘tip’ and is worth one point towards victory.

The game continues without stopping (other players are fulfilling their orders while you are doing the same) and ends when the last order card is completed. The person with the most completed orders wins the round! 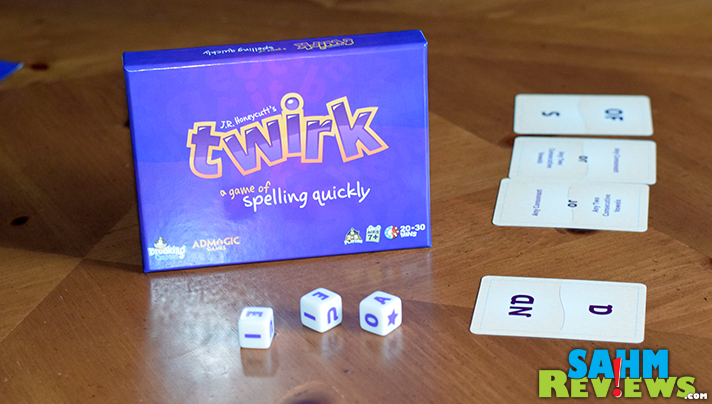 J.R. Honeycutt has quite a few published titles under his belt, the highest rated being Twirk by Breaking Games. Billed as “A Game of Spelling Quickly”, Twirk combines both cards and dice to create a fast-paced word game for all ages.

Your objective in Twirk is to create words from the randomly-drawn cards and dice. Each player holds two cards for their own use and three cards are played to the middle of the table. Using the letters on these cards and the results of the three vowel dice, all players race to create a word at least five letters long. You can use the cards on the table, the dice and the cards in your hand to make this word, calling “Twirk” when you find one. Lay out your word for everyone to see, and if you’re the first player to make a word that round, take the purple crystal.

Each time a word is made, add one card to the middle of the table. Now you must build at least a six-letter word in the same manner. The round is won by the first person to make an 8-letter word during any turn.

The purple crystal acts as a wild card, but only able to be used by the person who won it. If you used it to make a 6-letter word, while it does stay on the table, no other players may use it in their word – their 7+ letter word must not include it.

Each time you win a round you are awarded a purple cube as a scoring marker. The number of rounds you must win to be the overall winner is determined by the number of players (Twirk handles up to eight players).

So take one part successful game publishing company (CSE) and add two parts successful game designers (Honeycutt and Andrews) and you have the recipe for success in their new joint venture, Fantasy Fantasy Baseball!

Fantasy Fantasy Baseball is a 2-5 player fantasy baseball board game in which players manage a team of fantasy monsters who’d kill to win a championship. FFB uses a clever combination of player drafting, roster management, and high-stakes weekly matchups to deliver quick, crisp gameplay that will leave players dying for the next season. 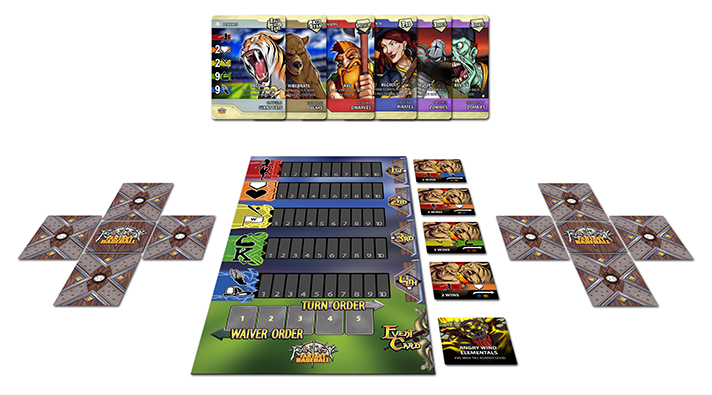 You are the Wizard manager of a baseball team of powerful and gruesome fantasy creatures battling through a season of fantasy baseball. Go head-to-head against other Wizard managers for Victory cards while building up your team’s statistics for even more Victory cards. But beware, your players may have spells cast on them.

Through a full three-part season and playoff, players draft athletic fantasy creatures with magical abilities, starting them in rotisserie-style games against other teams. The object to is collect wins as many wins as possible and make it to the Championship Series. The ultimate champion is the team who claims four wins in the head-to-head, winner-take-all Championship! 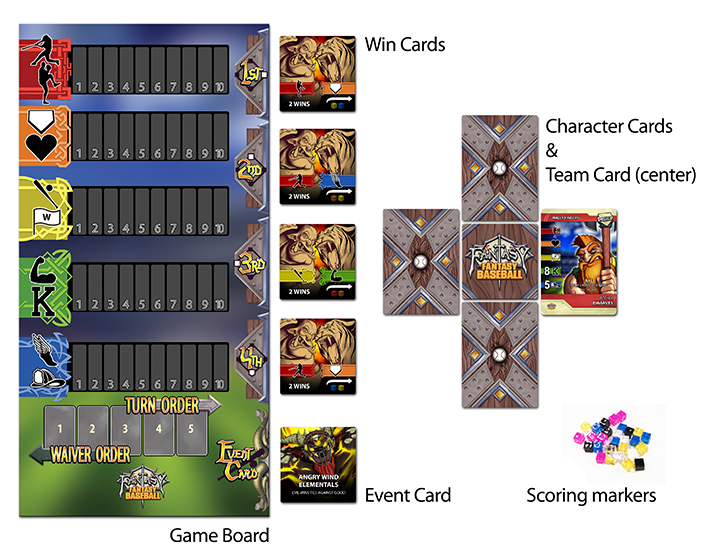 Instead of the typical fantasy baseball experience taking months to play, the entire Fantasy Fantasy Baseball experience is boiled down to 10 minutes per player. The amazing fantasy creatures provide something for the baseball fan and the gamer in all of us.

Fantasy Fantasy Baseball breaks down to: one part fantasy, one part fantasy baseball, one part baseball cards, with a pinch of satire. Baseball fans will enjoy all the subtle and not-so-subtle baseball references, but you don’t have to be a sports fan in order to have a lot of fun with this game.

Not mentioned was one of the most attractive features of the game – the price. For under $20 you get the complete Fantasy Fantasy Baseball game with shipping available to anywhere in the world. Pledge $50 and be guaranteed one copy of each in the series (football and hockey coming later, with the hockey version sporting a full NHL license!).

As you know we don’t often feature or recommend any type of Kickstarter game because it takes too long to receive your product, and we’ve all heard horror stories of companies that ran away with the funds never to be seen again. However, like our Calliope Games Kickstarter recommendation, by backing a known company with known designers, you stand to be the first on the block with a great game at a great price!

Update: Fantasy Fantasy Baseball had a successful Kickstarter and will soon be available on Amazon!