I’m not one to spend a lot of money at the local Starbucks, but my passion for coffee runs deep. Or at least my passion for coffee makers since I own about five different. Don’t laugh. They all have their purpose! My current favorite is the Ninja Coffee Bar because it has features for crafting coffee house style drinks at home. The Dripo is specifically for the perfect cup of cold brew coffee and man, it’s smooth. My iCoffee Brewing System uses innovative technology for a pot or the iCoffee Opus for making one cup at a time. The Touch coffee brewing system is simply versatile for single or multi-serving options from one unit. The Ninja Coffee Bar is my current favorite, making it my daily driver. The others (including a Keurig) are on my kitchen storage shelves for when I want to use them for their designated specialty. When I write it all out, it sounds like I may have a problem. Maybe I do. But you can have things that seem the same but actually create a different result or serve different purposes… just like themed board games! We’ve told you about Marvel-themed games, art-themed board games, games about trees, cat-themed games, games that focus on bunnies, Irish-themed games for St. Patrick’s Day, board games for Valentine’s Day, games to get you in the Christmas spirit and MORE Marvel-themed games. As a tribute to my coffee fascination, we’ve compiled a list of  coffee-themed games! They may share a common topic, but have different mechanics, accommodate various player counts, have different difficulty levels and provide unique experiences. Why have one in your collection when you can have 20?! 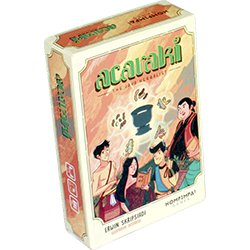 The Book of Madhawapura tells about the story of Acaraki, a herbalist or an expert of concocting Jamu. “Jamu” is a Javanese word which employs meaning of a mixture of natural herb ingredients that have been existed since centuries ago. 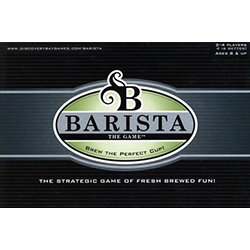 In Barista, players compete to be the first to brew a customer’s specialty coffee drink, as ordered. The player who brews the cup first, or comes closest to it, will earn tips toward victory as the best Barista.

The game comes with 56 cards, 4 special dice, a coffee mug dice cup/tip jar, 20 tokens (tips), a special token bag, and rules that could be written a bit better. All in all, a good experience for specialty coffee fans everywhere. 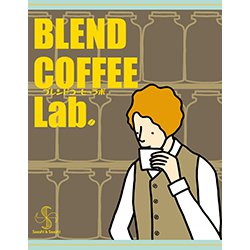 Blend Coffee Lab is a trick-taking card game about pairing roasted coffee beans to make delicious coffee blends. Each player is a worker in the coffee lab, tirelessly working day and night to research coffee blending; pursue a unique, harmonious flavor, while keeping current trends in mind; and create a new, harmonious flavor that could never be made from a single origin source. 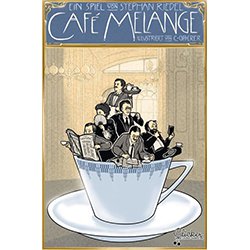 Café Melange takes players to Vienna in 1910, with prominent individuals such as Trotzky, Klimt and Freud meeting one another in the coffee bar “Central”. The players work in the coffee bar and must use logic and deduction in order to place their guests next to these VIPs. (A “Café Melange”, by the way, is a specialty coffee drink akin to cappuccino.) 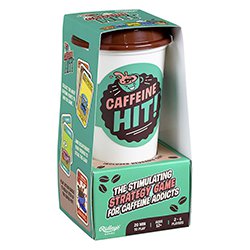 Get a caffeine buzz with the Caffeine Hit Game from Ridley’s Games. This stimulating and strategic game is all about collecting caffeine points, serving up a few action cards to stir the pot and de-caffeinating your opponents to take the lead. 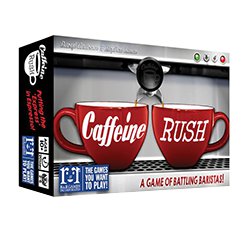 Need a jolt to get your day off to a great start? Jump into the game of Caffeine Rush for a latte fun! You share a workspace with your fellow baristas and orders are flying in fast and furious. Grab the ingredients you need to pump out orders and rake in the tips! But be careful — if someone else finishes your work, they’ll get the tips!

As each drink is served, you’ll pull a new order and shout it out. You will definitely need a double shot of espresso to compete in this hilarious game of battling baristas! 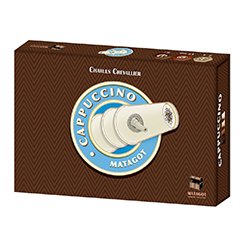 Cappuccino features 64 beautiful plastic coffee cups in four different colors, with each player owning one color. At the start of the game, place all the cups face down on the table, shuffle them, then group them together. On a turn, a player can capture a stack that’s adjacent to one of his own stacks as long as his stack is the same height as or taller than the adjacent stack. As long as a player’s color stays on top of the stack, he controls that stack. When all the cups have been captured, players stack all of the cups they captured and whoever has the highest stack wins. 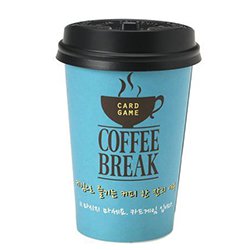 In this quick and light card game, players try to be the best barista by playing sets of Ingredient Cards to match the Order Cards. 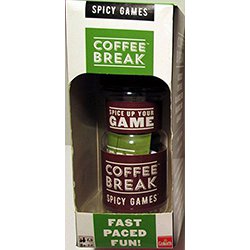 Get ready to add some spice to your game night with Spicy Games! Each of the spice bottles hold all of the pieces you need to play a game. Each game takes 2 minutes to learn and 10 minutes to play. For ages 8 and up.

Players roll dice, try to spot the right combination of coffee cups and shout it out first. The winner is rewarded coffee beans according to a game instructions. 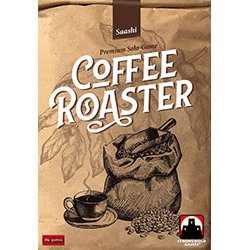 Coffee Roaster is a solitaire pool-building game. You choose a variety of coffee beans you want to roast, and put a number of tokens specific to that variety into a bag. Each turn, you draw a number of bean tokens randomly from the bag to advance their roast level. When you are finished, you make a cup-testing to check the taste of your coffee and score points accordingly. Each variety has its own target roast level, but approaching the target is not enough for perfect roasting; you also have to even out the roast level of each bean, while not spoiling the flavor of that variety. 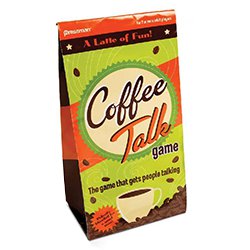 The Joy of Conversation Game. Turn over a “Topic Card” and then everyone has 45 seconds to write down whatever they can think of about in relation to the topic; topics range from New York City to Jay Leno to Google to Las Vegas. When time is up, players move their coffee beans up their respective containers (boards) based on the number of original ideas they had. To change a topic: “Cream it” and move on. To have the other players to accept your offbeat answers: Sweeten them up with a “Sugar Packet”… and you score. 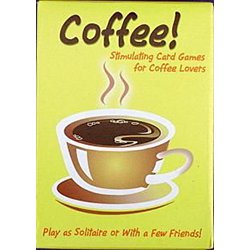 Included are two sets of instructions – a solitaire game called “Barista”, that plays similarly to traditional solitaire, except that you collect recipe cards for different coffee drinks and then build the ingredients on top of them – and “Percolator”, where players race to build a coffee drink.

The cards are cute with simple drawings of Vanilla, Cocoa, Irish Creme, Espresso, and the like – there’s even a stir stick card that is used sort of like a wild. 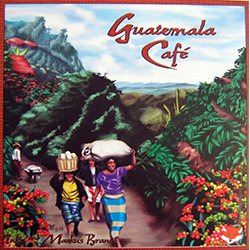 A game about coffee planting and selling in Guatemala. The game uses two boards, representing plantations and markets. Players try to produce different kinds of coffee to ship to Europe. The market overseer decides where and if players can buy roads, huts, workers or ships or if scoring takes place. The scoring track also has a marker on it which moves ahead. The game ends when a player caught up with the marker on the scoring track. 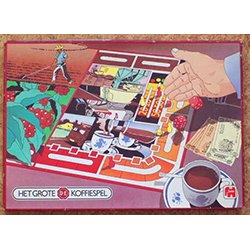 Game given by Dutch coffee company Douwe Egberts to customers which had collected a lot of coupons found on their products.

Theme of the game is coffee (really!); you are a coffee seller buying raw harvested beans and rights for different production phases (blending, roasting, packaging and distribution) to optimize the profit from selling your coffee. You can trade coffee and rights with other players. 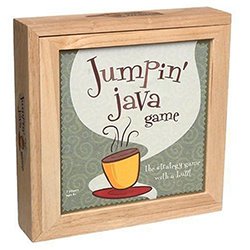 The strategy game that’s a big buzz without the caffeine! Try to outwit your opponent and be the first player to jump your cups and slide your saucers to the opposite end of the game board. Jumpin’ Java is a unique game that is fun to play and display. It is sure to find a home on your ‘coffee’ table. 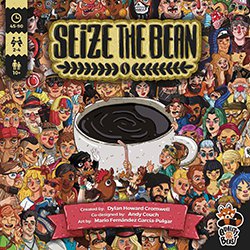 In Seize the Bean, players compete to be the best new café in Berlin. Reputation in both Berlin (in real life) and the game is earned from people — all the diverse customers you’ll serve. You start only with your family and friends, and you have to prioritize your limited actions each turn to attract customers, upgrade your café’s decor, expand your product line, and restock your resources in order to get the most reputation of all. 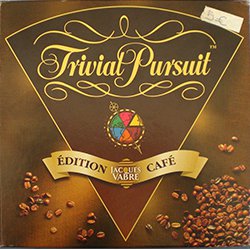 The rules are similar to the classical Trivial Pursuit. The question are all coffee related and quite difficult. This game was never sold in shops but distributed by the coffee brand for promotion. 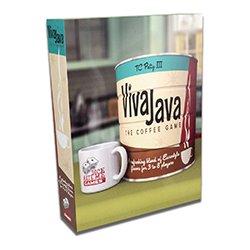 VivaJava: The Coffee Game is all about finding that perfect blend of beans to create the next best-seller in the coffee houses and kitchens of the world. In the game, players send their researchers to hot spots around the globe to gather the perfect bean. This may bring them into contact with other players who are also on the hunt, creating a crucial choice: Go it alone and continue to research, or join forces with that opponent, hoping to combine beans from both player’s bags and share the score with a superblend. 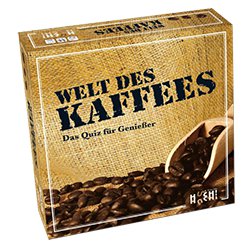 Trivia game with more than 200 questions about coffee, cultivation, roasting, different types of coffee and more. Players choose for each question how many points they want to make and how big a risk they are willing to take.

As you can see, there are plenty of options to fulfill your coffee cravings. The best part is they take up a whole lot less room than owning multiple coffee makers.

Which coffee-themed game appeals to your taste buds?