Next week millions of Irish (and wanna-be Irish) will take to the streets, bars and more to celebrate St. Patrick’s Day. At our house we celebrate the holiday also since it’s confirmed that the largest portion of our DNA comes from the land of leprechauns. According to most sources our surname used to be MacBrady and was shortened to just Brady at some point a few hundred years ago.

It wouldn’t be a holiday celebration at our house without a gathering around the table to play board games. But for this special day, just any game won’t do! We’ll be rolling out a number of Irish-themed board games to celebrate the spirit of the day! And if you act quickly, you can have some delivered in plenty of time for this special day! 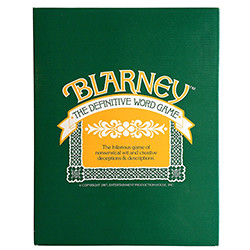 This game consists of decks of cards each with five words and their definitions on them. The Blarney Master – chosen by the roll of the die – selects a card, then chooses one of the words by speaking it. The 3-minute timer is begun and the players have that long to write down their definition of the word. Scoring is determined the players voting for the “best definition” and points are awarded to the player with the most votes and the player with the best definition and the Blarney Master if no one votes for the correct definition. The one with the most points gets a green Blarney stone to indicate such.

An old Irish legend tells of a hero who gathered 10 brave men together to drive the enemy from their land in a great battle. After returning home, he gave each of his followers a magic amulet. Each amulet was similar: the 9 outer parts were identical, but the middle part of each was different, making it possible to distinguish one from the other. The amulets brought their owners and their offspring respect and wealth. When the Vikings conquered the land, they destroyed the amulets, scattering the parts of each throughout the land. The players take the roles of adventurers in 11th century Ireland, who seek to recover the parts of the amulets and put them back together. 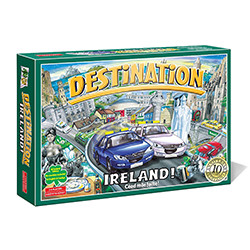 DESTINATION is the Award Winning, fast moving Taxi game that will take you on a journey through the streets of Ireland in your very own cab!

As the driver you will visit famous destinations, collecting fares and trying to avoid the traffic lights.

The aim of the game is to be the player who has earned the most money at the end of the shift – if you can survive the shift! 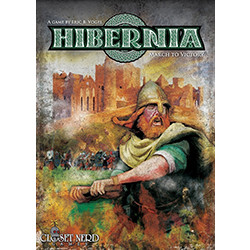 Set in Iron Age Ireland, Hibernia is a fast, simple wargame with strong European-style mechanics. It depends on well-balanced and clever play rather than pure aggression. Die rolls restrict when players can attack or reinforce their positions, and a unique scoring mechanism changes the resources which players need to score points each turn, keeping player positions dynamic. 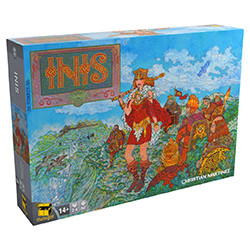 Designed by Christian Martinez and lavishly produced by Matagot, Inis is a two-to-four player board game that immerses you in Ireland’s fierce heroes, enchanted objects, and beautiful mist-covered landscape. Your goal in Inis is to become Ireland’s first High King. 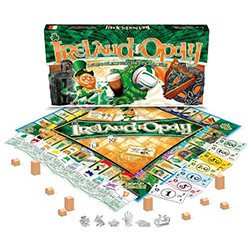 The Classic property trading game you all have come to know and love, only this time with an Ireland theme. 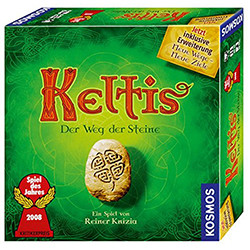 Keltis is a multi-player game based on Lost Cities, with some rules changes, later published with Knizia’s original rules and theme as Lost Cities: The Board Game. Players play cards to move their playing pieces along stone paths. Cards show one of five different colors/symbols, each corresponding to one path; in addition, each card shows a number (0-10, twice each). In each color, each player can play his cards in either ascending or descending order. As in Lost Cities, it’s better to concentrate on a few paths since the final spaces on a path grant high points, but ending early gives negative ones. 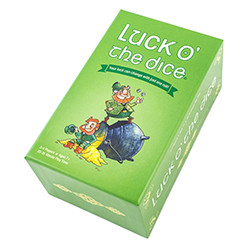 Luck O’ The Dice is a game of dice, cards, and coins for 2-4 players (ages 7+). The object is to accumulate the most coins by completing dice cards, rolling Pot O’ Gold combos, and stealing coins from other players. Average play time is 20-35 minutes. 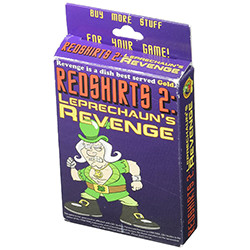 Be the first Captain to get all of your Redshirts killed! Redshirts 2 is a card expansion to the game. Join us as Leprechaun, a genetically engineered fairy tale creature goes after the players on a quest for revenge. 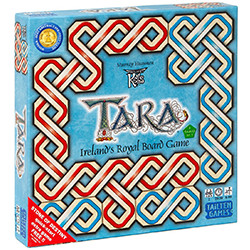 Inspired by the Book of Kells and its mesmerising patterns woven amongst the vellum pages, Project Kells evolved. Tara is a collection of three multi award-winning games steeped in the ancient legends of Ireland’s Celtic heritage and royal past.

Grab a couple of these great titles and set them out while the corned beef and cabbage are in the crock pot! With a little luck of the Irish you’ll soon be on your way to hosting the best St. Patrick’s Day party that Leprechauns of all ages will enjoy!

28 comments on «Celebrate St. Patrick’s Day With Irish-Themed Board Games»