There’s no denying that some game themes are more popular than others. Everywhere you turn you can find zombies and vikings. There also seems to be an uptick in games about cats, scientists and even sushi. But one of my favorite themes seems to be under-represented in the board game market – Celtic. 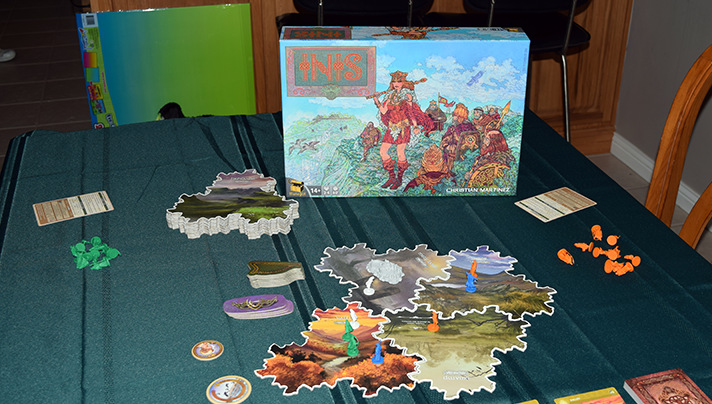 Sure, there are classic abstract Celtic games like Ard Ri or Hnefatafl, but what I really crave is a modern hobby game embracing all things Norse. We found exactly this in Asmodee‘s 2016 release of INIS! And as a bonus, it is very different from anything else in our collection!

The first thing you’ll notice is the box artwork, which I refer to as a love-or-hate style. If I’m being completely honest, upon first look it did not appeal to me at all. I was actually hoping my copy was a prototype awaiting final art approval. Turns out this was the final product, and over time it actually began to grow on me. 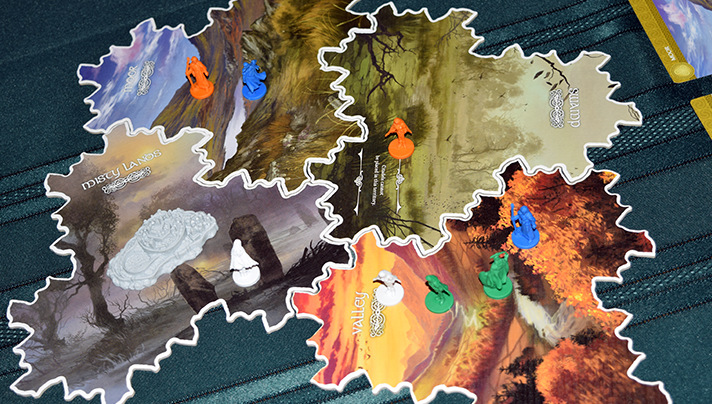 But I rarely poo-poo a game just based on box artwork. And the graphic design on the actual game components more than made up for any deficiencies on the cover. Each 8″ x 8″ tile of the game board (yes, that large!) is stunningly gorgeous and snap together perfectly even though they have the appearance of being randomly cut. 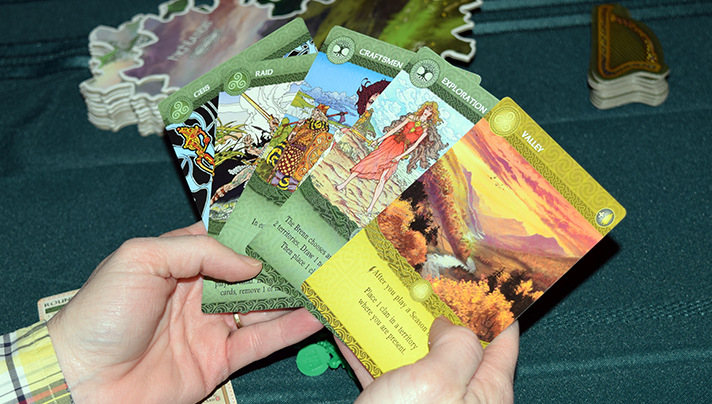 There was also the choice of using tarot-sized cards instead of regular poker-sized, a decision that gives the game more perceived value. The card graphics live up to those on the tiles and certainly scream for card sleeves so as not to mar them up in any way while playing. 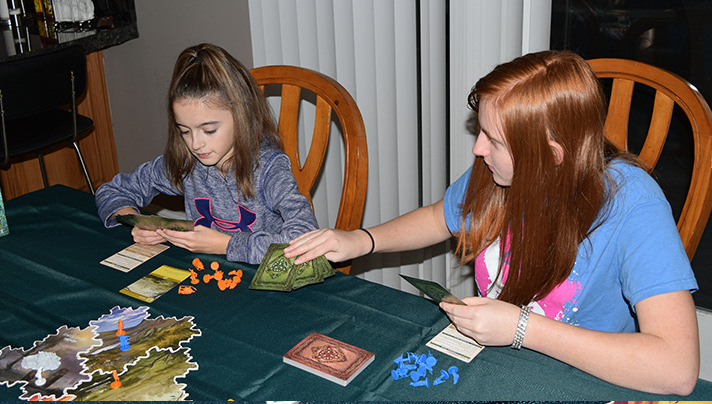 So how is INIS played? At the heart INIS is an area control game with multiple paths to victory. At the beginning of each round players draft their hands of cards by being dealt a hand of four cards. Choosing one card, the rest are passed to the player next to them (left or right, determined by the play order of the round). Then with these three new cards (plus the one you saved), keep two and pass two. You guess it, then keep three and pass one, keeping the last card and finalizing your hand of four cards. 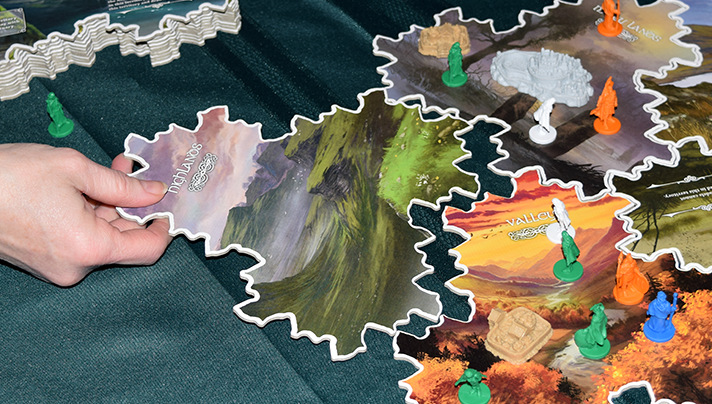 During the “Season” phase of the round, each player takes turns playing a card from their hand, resolving the effects printed upon it. Some allow placement of miniatures on the board, others let you move them from tile to tile and one even allows you to ‘discover’ a brand new area, adding a tile to the playing area. 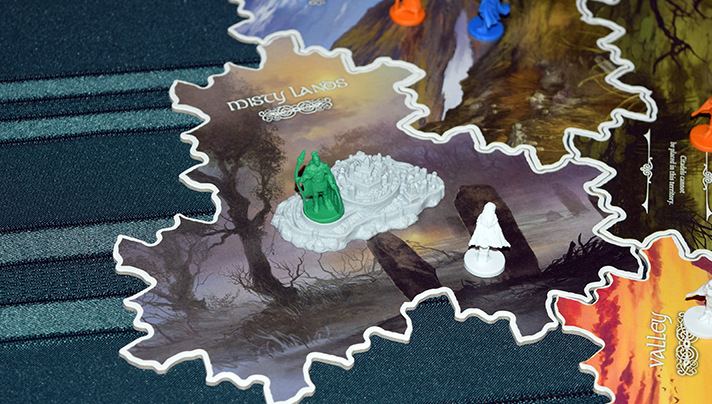 Clashes are a natural part of INIS as you vie for control of an area. Special rules about Citadels, attack order and retreats all play into each clash. You can even form a temporary truce with your opponent and agree to exist in peaceful harmony (for this turn) if you wish.

There are three ways in which you can win your session of INIS. First, simply be present on the board in six or more territories. Or you can be present is territories with six or more total sanctuaries (there may be more than one sanctuary placed in a territory). Lastly you might become chieftan over six or more opposing clans. With so many different ways of winning, you have to keep a close eye on your competition to make sure they aren’t sneaking in a win condition you didn’t see coming! 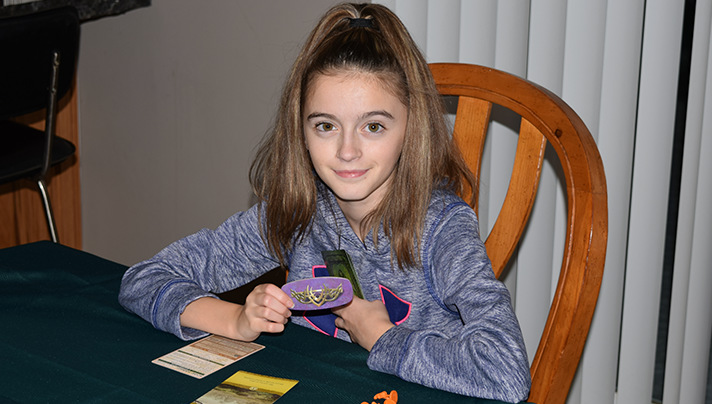 When one or more win conditions are met in a round, the successful player grabs a Pretender token. This token signifies the player has met all of the criteria of one of the win conditions. This might change by the end of the round, and stands as a warning to other players that someone is close to grabbing victory. During a key point in each round, end-game is checked and if at least one player has a Pretender token, the game stops and a victory check is made.

If one player has more Pretender tokens than anyone else, they are declared the winner. If there is a tie among the most tokens, the game continues unless one of the tied players possesses the “Brenn” title (1st player). If so, that person wins the game. 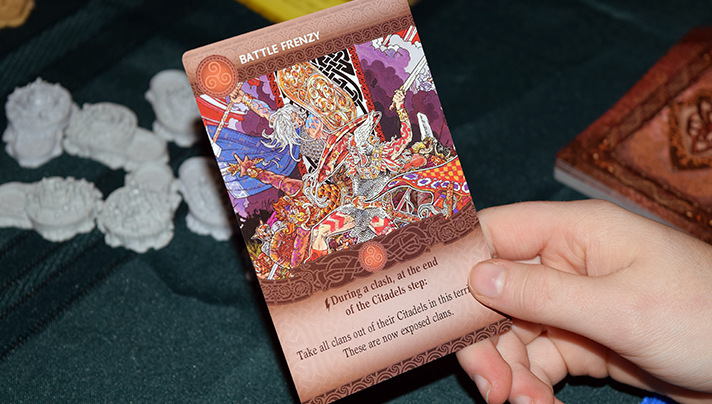 There are also Deeds to collect, which make attaining a Pretender token a little bit easier along with Epic Tale cards that may be used only once, but evoke Celtic gods and heroes to help you accomplish legendary feats. And while INIS might sound very involved, a game lasts only around 60 minutes thanks to the multiple paths to victory.

If we didn’t already own a copy of INIS, it would certainly be on our Christmas wish list. Many stores are starting to sell out, but you can still find a few on Amazon for under the MSRP of $69.99. If you don’t have a good Celtic-themed strategy game in your collection, INIS is the one you must have. Combining area control with deck building, it will fit into both categories on your shelf!

While it seems like Asmodee has a new game coming out nearly every week, you should still keep an eye on their Facebook and Twitter timelines. We have heard rumor of a couple VERY exciting games coming down the pipeline and you’ll certainly want to be among the first to know about them!

Do you have any Celtic-themed games in your collection? What are they?

13 thoughts on “A Game Not About Zombies or Vikings!”