I think I was around 13 or 14 when I got my first real science kit. It was a chemistry set, and included all types of vials full of liquids and powders, a tiny bunsen burner and a booklet half full of safety warnings. Not bad for the early 80’s, as earlier versions included things like uranium ore and extremely powerful acids. It’s a miracle our parents didn’t glow in the dark, much less were still able to procreate. 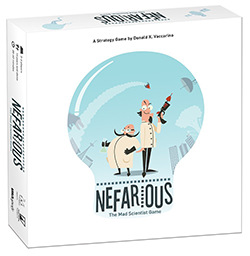 We’ve tried introducing our girls to other kits like this, and have purchased ones for electronics, robotics and even crystals, but after played with once they end up gathering dust on the shelf. One thing we do have in common is the fantasy of becoming a mad scientist. I secretly admired Simon Bar Sinister from the Underdog cartoons. My girls regularly talk about Dr. Heinz Doofenshmirtz (Phineas and Ferb) and Dexter from Dexter’s Laboratory. So finding Nefarious by USAopoly, a game we could play together where we ALL get to be mad scientists, was nothing less than fate.

Fortunately your goal isn’t to destroy the world, but to be the first to build enough inventions to do so. Inventions cost money, and there aren’t too many job opportunities for an aspiring evil mind. During the game you must manage your income and expenses, trying to maximize your output (in inventions) better than all of your opponents. 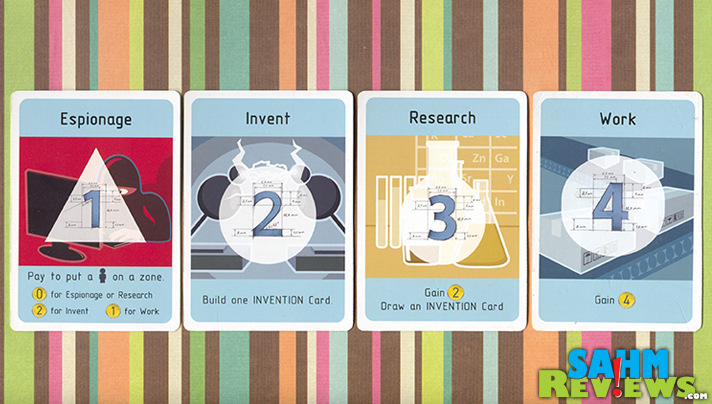 Every player (up to six) receives an identical hand of four cards, each depicting one of the action options you have on a turn. During a round, every player selects one action and places it face down in front of them. When everyone is ready, all are revealed at the same time. 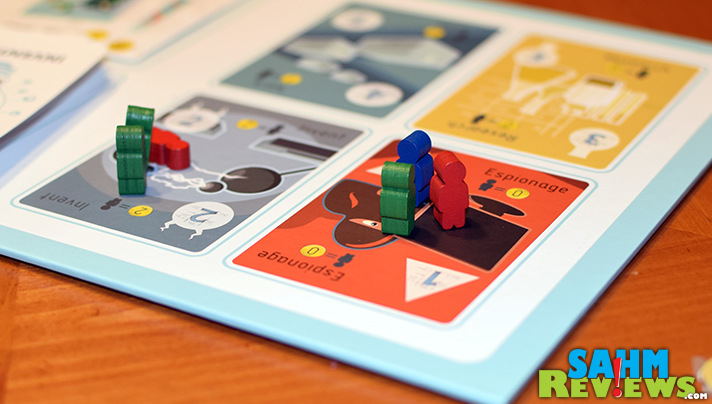 First, you might select “Espionage” to send a spy onto one of the four corresponding spots on the board. These match the actions on your card, and on subsequent rounds if one of the scientists on either side of you plays that card, you receive $1 for each spy you have placed there times the number of players (up to two) that played it.

You can’t be expected to build something without proper research, so this is another action you might select. When you do, simply draw another card from the invention pile and add it to your hand (and receive $2 for your efforts). Choosing the “Work” option simply awards you with $4, while the “Invent” card does exactly what you think it would – pay the listed fee on one of the invent cards in your hand and complete it, taking any listed bonuses immediately. 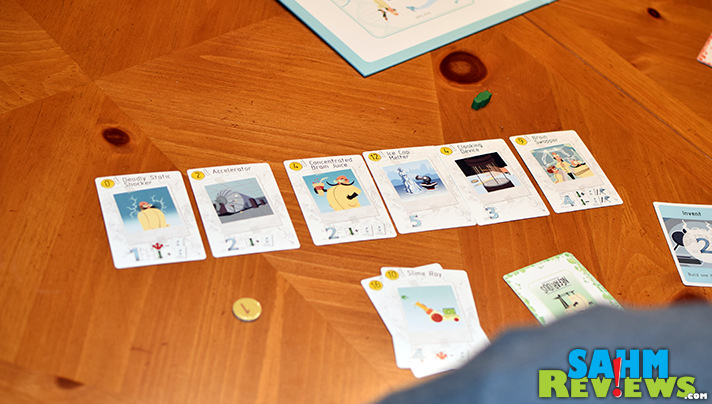 On each invention is a large number printed in the lower left part of the card. These represent victory points, and the first person to amass 20 points or greater wins the game. Because everyone plays their turn simultaneously, you can expect quick games of only 20-40 minutes! 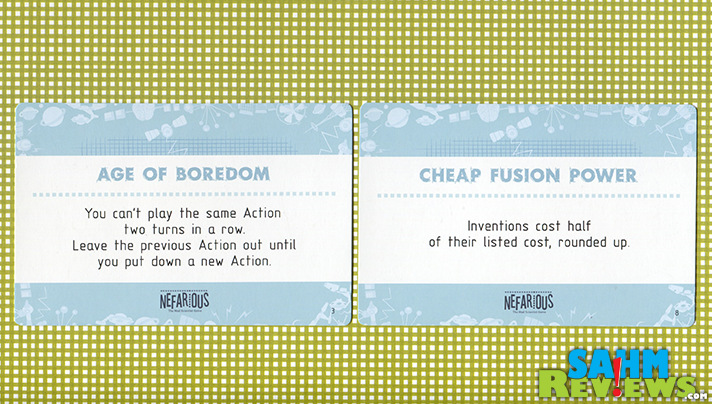 We love when games include options to make every game unique, and Nefarious didn’t disappoint. Included is a deck of optional “Twist” cards that are drawn from before each game begins. Two cards are used per game and they can change the master rules dramatically. They might raise the pay you receive for work, add to the amount of victory points from inventions or even prevent you from taking the same action twice in a row. 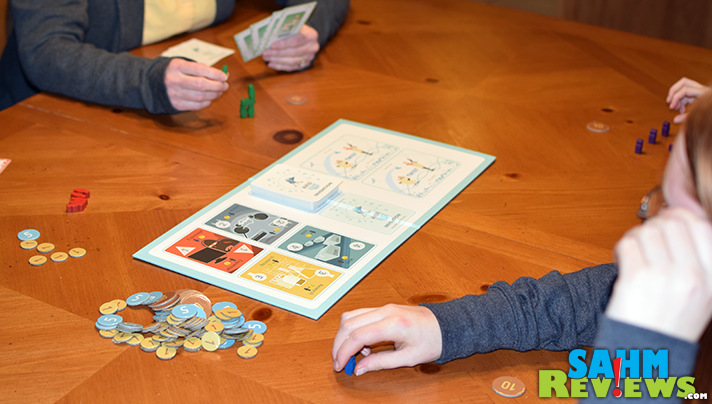 After playing Nefarious a number of times at home and with our local game group, we feel it will become a great filler (short) option for when our brains are tired of the longer ones. We received an early production copy which has rather thin card stock, but heard online that this has been corrected for the copies on sale now. Either way, for under $30 this is one you should probably have in your collection if you have budding scientists in your family. Don’t let the age rating of 13+ scare you away, this can be easily enjoyed by the 10+ crowd.

Find a copy on Amazon or at your local game store. And be sure to check out the HUGE library of titles available from USAopoly – I’m sure you’ll recognize many classic favorites in current themes! They’re also very active on Facebook and Twitter – you’ll certainly want to be following them so you don’t miss their latest announcements!

19 thoughts on “Just as Fun and Without the Radiation”