From a very young age, we grasp the concept of pointing the finger at someone else as a way of deflecting attention. For siblings, it becomes an art form in making sure someone else takes the fall for whatever is going to upset mom and dad. I was the youngest and I’m pretty sure I never did anything wrong. Ask my brothers and they will likely agree.

At least that’s how it went down in the record books anyhow.

As an adult, I’m the kind of person who gives others the benefit of the doubt. If they’ve wronged me somehow and I don’t know the reason, I make excuses on their behalf. I don’t like believing people are intentionally malicious. Yes, it’s very naïve of me. I’ve been burned a few times, but still feel the need to address each situation in this same manner.

That doesn’t mean I’m not willing to point fingers and place blame whenever possible if the situation warrants it. Fortunately, those times revolve around games. Earlier this year I told you about Dead Last by Smirk & Dagger Games. The concept of pointing fingers and redirecting attention was exhilarating. Nobody was getting hurt and everyone was having fun. Would it be possible for Smirk & Dagger to replicate this backstabbing, finger-pointing concept in another game?

The answer is undoubtedly “yes” and that game is J’Accuse which you may recognize from our family games gift guide.

The concept is simple. A wealthy man was murdered and the inspector is trying to figure out which heir is guilty. All the other heirs are perfectly happy pointing fingers in an attempt to redirect suspicion. Sometimes they’ll point to the person on their right. Sometimes to the person on their left. Even sometimes across from them. Then there are times when they’ll outright accuse someone. The investigator then evaluates what the heirs have to say and records the evidence. This continues until there is enough evidence to convict someone. Simple, eh? 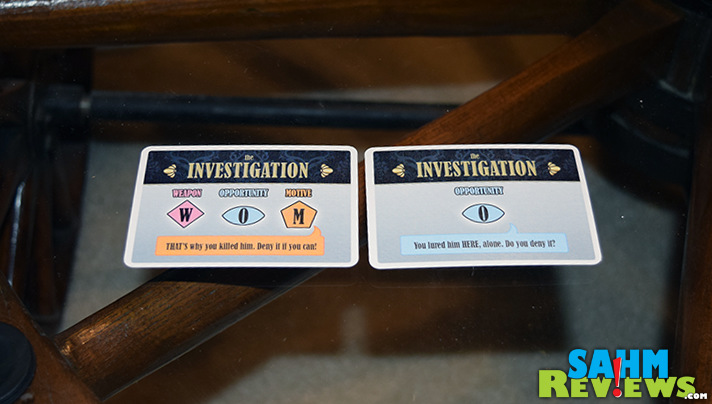 Each round, the inspector rotates one player to the left. The inspector selects an investigation card that will be in play for the round. The investigation card identifies what type of evidence the investigator is focusing on that will become hard evidence when revealed. There are three types of evidence – the motive, opportunity and weapon. When there is enough hard evidence (1 of each different kind or 5 pieces altogether) against one heir, they are the loser and everyone else wins. At the beginning of the turn, one of each type is put into play starting with the player to the left of the inspector. 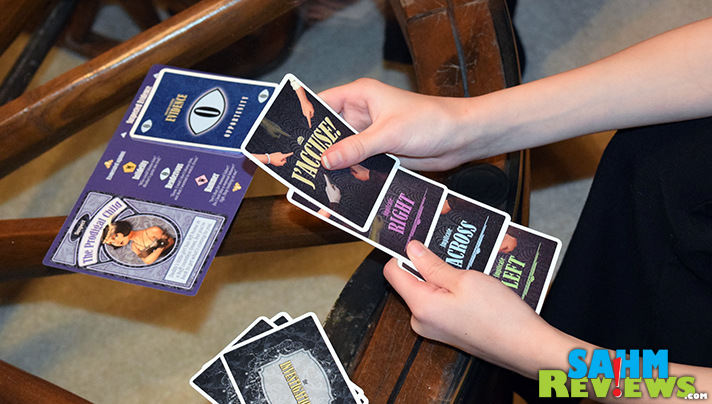 Players select their accusation card and place it in front of them then simultaneously reveal their choice. The evidence cards shift according to the majority. If there isn’t a majority, then it’s determined to be J’Accuse. More on that in just a second… 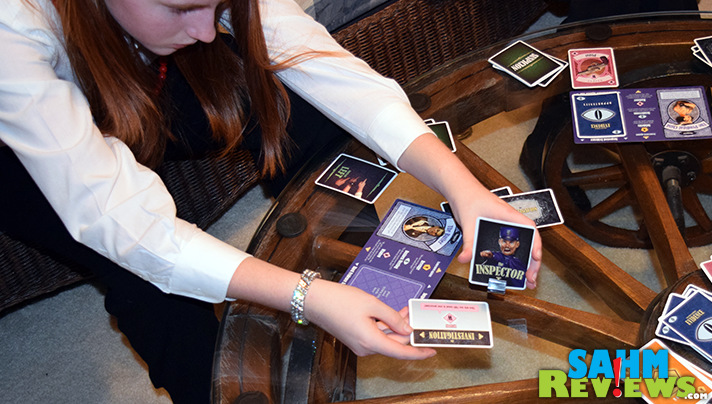 The cards continue to pass right, left and across until J’Accuse occurs – whether by the J’Accuse card being the majority or no majority as previously mentioned. At that time, the investigation card is revealed. Whatever evidence being evaluated becomes hard evidence for the individuals accused and those heirs are one step closer to being discovered as the murderer! The inspector role passes one player to the left, new evidence is revealed to replace anything turned to hard evidence and play continues. 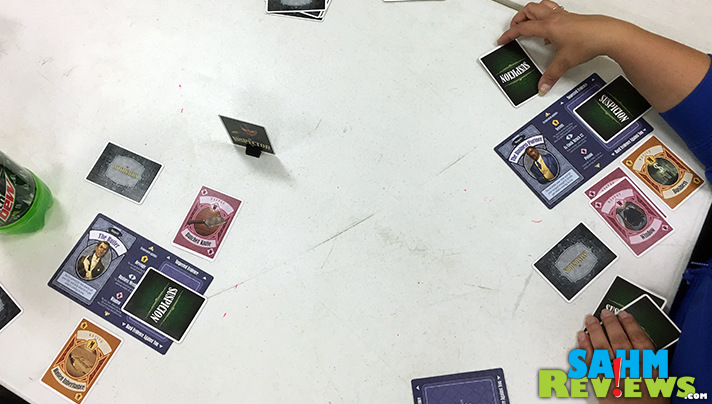 See, I told you it’s a simple game. It plays anywhere from 3 to 6 people and doesn’t require people to know each other. Cards have flavor text that allows participants to get into character during the accusation process and distribution of hard evidence: “YOU were seen in the wine cellar!” Fortunately, that doesn’t make or break the game so players who prefer the investigation process over the role playing can still find the game enjoyable.

While Dead Last is better for larger gatherings, J’Accuse is still a great game for medium sized groups… And it gives you an excuse to point fingers! Copies are available for right around $15 on Amazon if you’re looking for a gift idea. We hear that the folks at Smirk & Dagger have a Kickstarter coming up. Follow them on Facebook and Twitter to be the first to hear when it’s announced!

Have you played games that require you to place blame and point fingers?

6 thoughts on “Pointing Fingers is the Name of the Game”