Every once in a while we say things that just don’t come out right. Those things that make you scurry in hopes that you can remove your foot from your mouth before anyone notices. You know what I’m talking about. Admit it… you’ve done it once or twice (or a lot of times.)

This is not one of those situations. I’m completely serious to congratulate someone for being dead last. It’s not an insult. It’s an accomplishment. And in a backwards kind of way, it’s a win.

Remember a while back when we told you about Why First? It’s a game where coming in first doesn’t mean you have won. You need to consistently come in second to be labeled the winner. Well, the latest release from Smirk & Dagger Games gives their title an even bigger spin by encouraging players to be last. Dead Last to be specific. 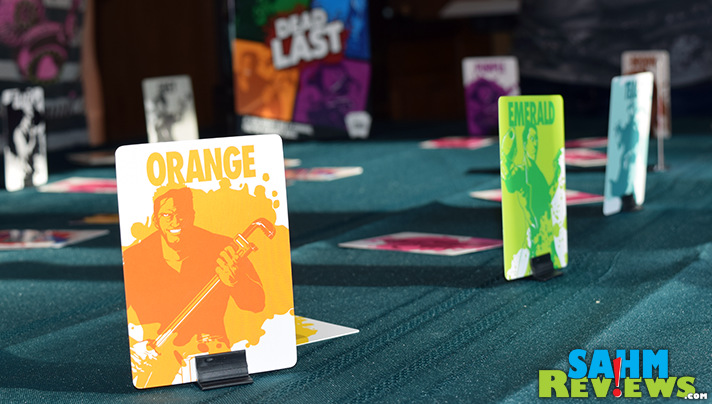 But in this case, the goal is to be dead…last. As in surviving longer than everyone else. It’s a party game designed to accommodate up to 12 players and it’s one of the few party games that doesn’t last longer with the increase in players. The unusual mechanisms make this game fast and furious with people dying left and right. 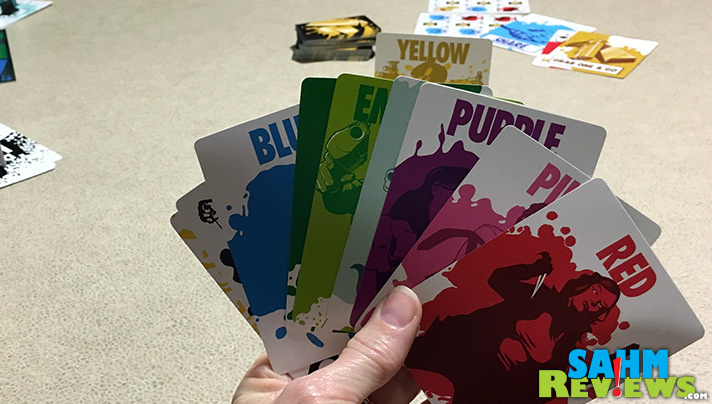 Everyone in the game selects a color to identify themselves. A stack of cards is given to each player including an Ambush card in their own color and color cards representing all the other players. Each round, the goal is to determine who from the group will die. All at once, everyone votes and the person with the majority of votes is dead. (Unless they play their ambush card but I’ll explain that in more detail in a minute.)

Sound a little bully-ish? It’s not and here’s why: Any player who didn’t vote with the majority, is dead also.

Not voting with the majority = dead.

If there’s a tie between two sets of people and no majority then both die. Anyone who didn’t vote with either of those groupings dies.

Lots of dead people, huh? Exactly. And all in one round… THAT quickly. Now here’s the interesting part that makes this game unlike any others. Not only is table talk allowed, it is completely encouraged. Players can flat out say “I’m voting for (insert color here) so vote with me.” Or they can be more subtle and point when the target isn’t looking. Or nod in the direction of someone. You get the idea. The goal is to be part of the majority in whatever way possible. That’s almost the only way to stay alive. 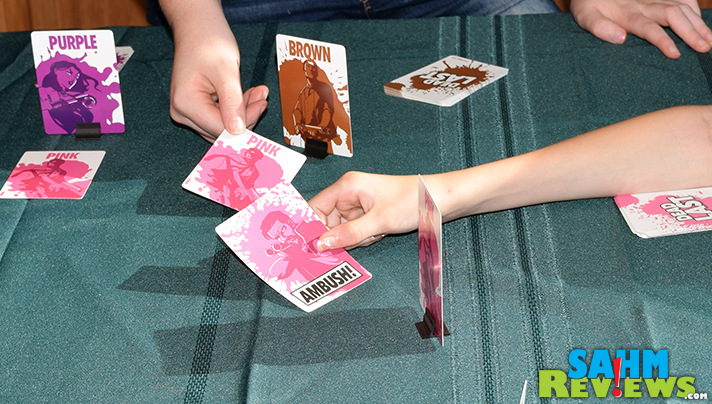 Let’s get back to the ambush card. If a player feels like they are the target, they can opt to play their ambush card which means they got wind of the plot to kill them and are turning the tables with an ambush. If they aren’t the target and misread the ambush then they are dead. After all, they weren’t part of the majority. If they WERE right and they did receive the majority of votes then they can select one of the players who voted for them to be the victim.

If it comes down to two players, they have a showdown where they each select an action which will determine who gets the loot. While the game is a series of quick rounds, the ultimate winner is the person who gathers the determined amount of gold first. So you can be amiable and split the loot in a showdown or go all-in to get it for yourself. Keep in mind, greedy people put targets on their backs! 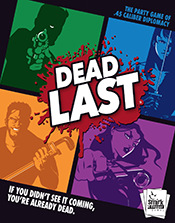 While the game is set to end when one player accumulates the designated amount of gold, it reality, the fun of this game is with each individual round. People can join and leave the game so it’s perfect for parties and social groups. You don’t need to know the other players well to participate, either, which is another great reason it’s ideal for social gatherings.

On a side note, I know Smirk & Dagger Games put a lot into this game because I was part of a focus group discussing the game’s title as well as artwork. Shoot over to see what we think of some of their other games and I encourage you to see how they are killing it on Twitter and Facebook.

So get your skills of persuasion ready, learn some skills in subtle hinting and start picking off your friends in the nicest way possible so you can be Dead… Last. Ask your local game store if they have Dead Last available or you can pick up a copy on Amazon for around $25.