For any of us that grew up in the 80’s or 90’s, you couldn’t escape the influx of trivia-based games. Nothing was more popular than Trivial Pursuit, selling over 20 million copies in 1984 alone! To date there have been scores of different editions issued in America alone. And on any day you’ll find at least two or three on the shelves of your local thrift shop at a huge discount.

When we’re out shopping for our Thrift Treasure series, we don’t even consider trivia games.  They’re usually all card-based (which don’t photograph well) and are simply variations of the same theme – answer a question and score a point, move your piece or be awarded a token. How boring. 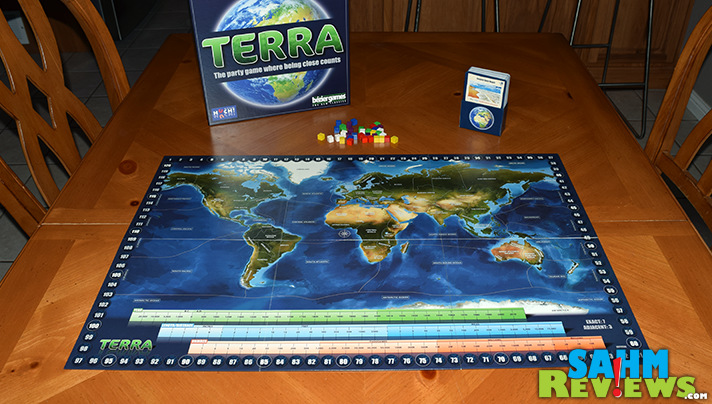 That was also our first reaction when a friend asked us to play Terra by Bezier Games last year. It didn’t help to know that he is a trivia master, regularly getting top spot at local charity trivia nights. But he is a friend, so we reluctantly agreed. We’re so glad we did as this wasn’t your typical trivia title! In fact, I would call this “Untrivia”! 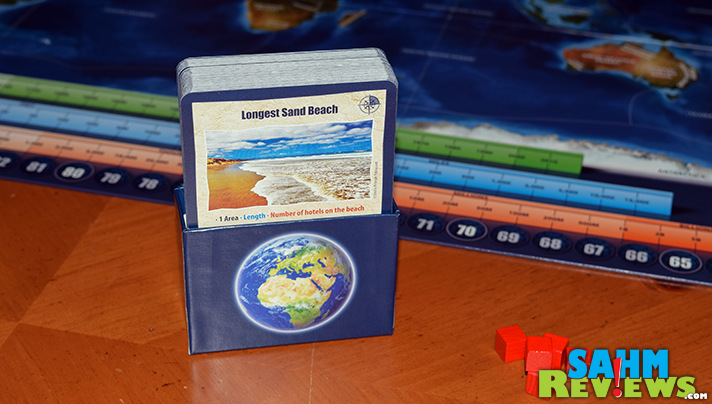 I think what most people hate about trivia games is they can make them feel downright stupid. If a category that you are well-versed in doesn’t appear, you can’t come up with any of the answers. For me, a weakness is remembering actors’ names, parts and lines. Our friend, however, can recite entire movies line for line! Movies & Entertainment is a regular category in nearly every trivia game, so we rarely have even a remote chance of winning. But Terra is a different type of trivia game. And one that was perfect for those of us who have these brainiac friends. It is designed so you only have to be close to the right answer! 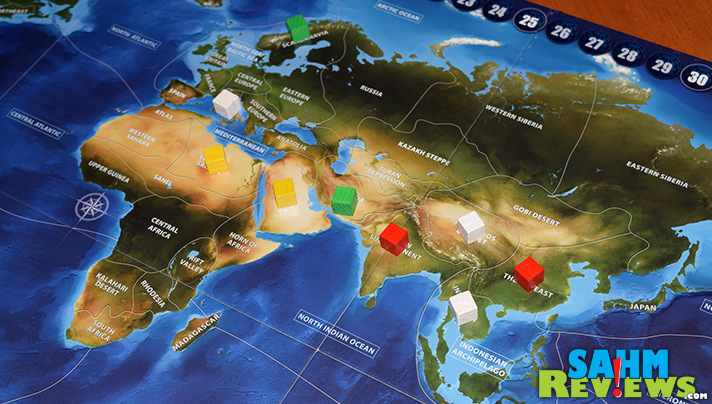 The first thing you’ll notice is the beautifully-drawn game board. Featuring a map of the world and three distinct bars across the bottom, this is where you’ll score points for your answers. Terra is played over only six rounds, keeping every game under 45 minutes, even with the full compliment of six players. 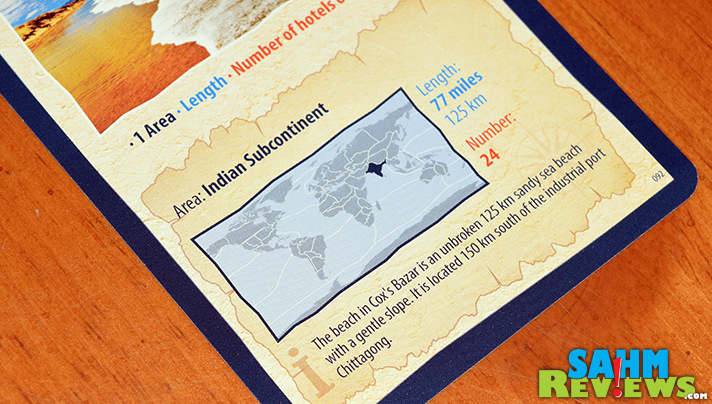 The active player reads the front of the trivia card without removing it from the holder (the answers are are the bottom part of the card). Each card’s subject is read out loud and the three categories in which answers must be provided. In this example, the subject is “Longest Sand Beach” and the categories are “Area”, “Length” and “Number of hotels on the beach”. “Area” refers to one of the segmented spaces on the game board map. “Length” utilizes the blue bar at the bottom of the board, while “Hotels” will place on the red. Other cards might have you guessing the year of an event or construction on the green bar. Each card will only require you to answer three subjects. 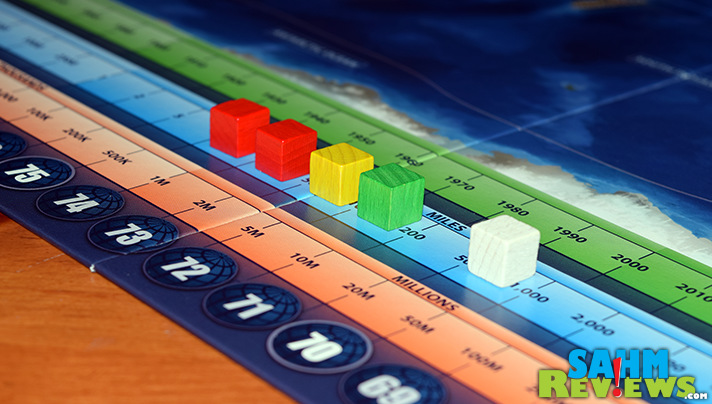 Unlike other trivia games, you don’t simply yell out the answer! You start with five colored cubes in front of you. These represent your answers. On your turn, place a cube on either the map or one of the applicable colored bars on the spot you think is the correct answer. OR, in our case, something close to the correct one.  Choose carefully as there is only one cube allowed per space!

The way Terra is designed, even if a person knows the answers 100%, they only get to place one cube on their turn. Other players will get a chance to select before they get another turn. At the end of the round, the answers are revealed and those with cubes on the three correct spots receive seven points each. BUT, if your cube is on an adjacent space (directly above or below on the bars, in a spot touching the correct area on the map), you’ll receive three points for each “close” cube!

Cubes which are in spots that don’t score are removed from the game, giving you fewer cubes to guess with on subsequent rounds. Don’t worry, you’re always allowed to start a turn with three cubes, so guess away! 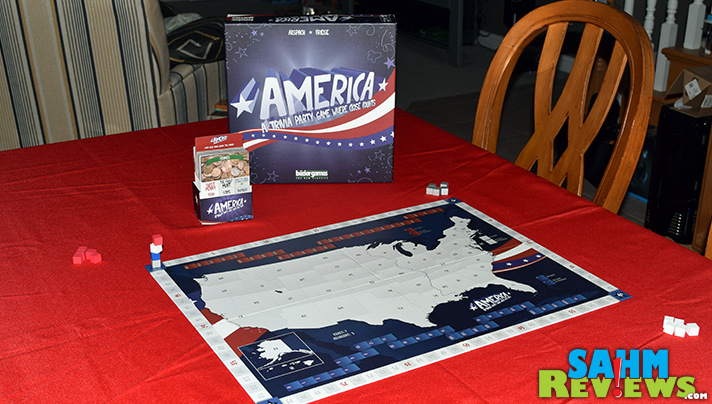 This summer we found out that Bezier Games was issuing a brand new “untrivia” game in the same line as Terra, America. Where Terra had random questions about landmarks and activities worldwide, America focuses on sites, pop culture and history of the world’s greatest nation! 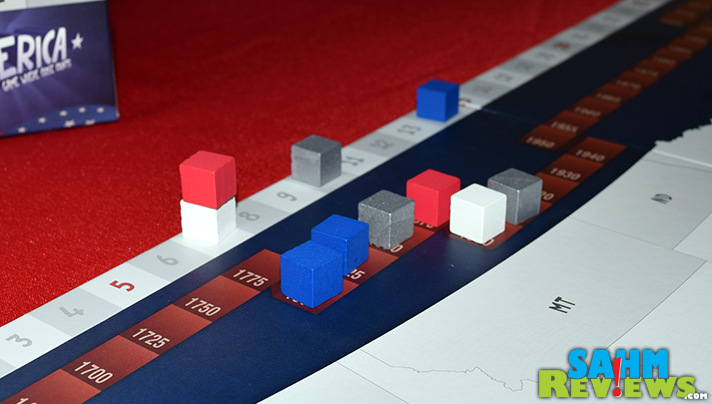 The basic rules are the same, score seven for exact answers and three for near-misses. There are only two bars this time (one at the top of the board, the other at the bottom) and the map is divided up into the states rather than general regions. The back of the board includes a version without the state names to really test one’s geographical knowledge! 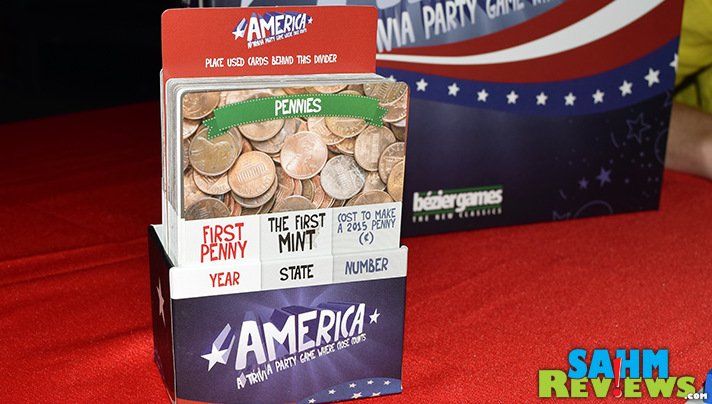 The actual cards have a much better layout and all fit nicely into the included drawing box (Terra’s box only fit 1/2 of the cards at a time). There is one noticeable addition to the scoring options. During the regular voting process (laying cubes) you have the option of choosing “No Exact” for three points or “No Exact or Adjacent” for seven points. Choose these when it seems no one is even close to knowing what the true answer is, and if correct you’ll be the only one to score on that section! 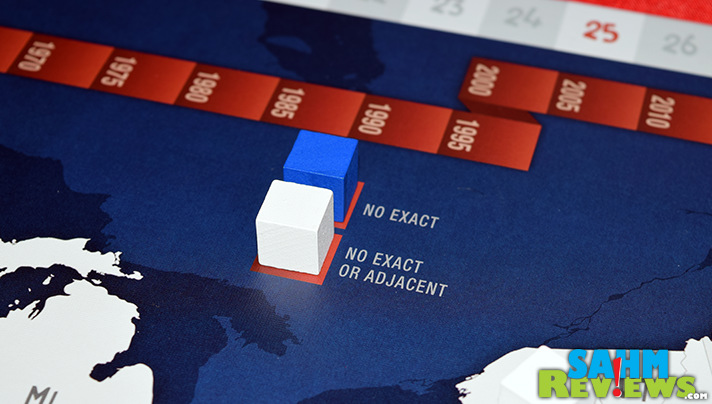 Like Terra, America also supports up to six players and is limited to six rounds. When presented with the two games, our family naturally gravitated towards the America version as we felt much more confident about our ability to semi-correctly answer the questions. I don’t know if it was allowed in the rules, but we allowed a good amount of table-talk to discuss what we knew about the subject and sometime even tried to convince others to guess on a date or area that we knew was WAY off from the correct answer. Terra/America is definitely the most social trivia game we have ever played! 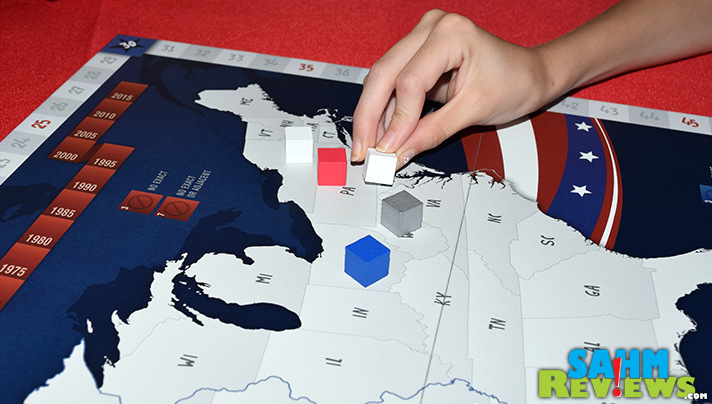 Both games are currently available on Amazon, but if you’re the least bit interested in America I would not hesitate picking up a copy now. It will certainly be on many people’s Christmas wish lists and I would hate to have you miss out and have to wait until next year to get a copy. Especially if you’re looking for a really good trivia game that won’t make you feel dumb.

Also be sure to check out Bezier Games’ current library, including the huge hit, One Night Ultimate Werewolf. I hear they are working on a couple new things for the latter part of the year, so watch their Facebook and Twitter feeds so you’re the first to know!

What is your best trivia subject?

18 thoughts on “Do You Run and Hide When Asked to Play a Trivia Game?”