Being part of the board game community sure has opened my eyes to all that goes into the creation of a game. Like an author writing a book, it doesn’t go from the imagination to hardback. There are several steps in-between that involve the initial outline and draft, edits and re-writes, the search for a publisher, previews copies for feedback, more editing, cover designs and ultimately heading to print. Board games have a very similar process and we have been fortunate to be able to provide input to various designers and game publishers on many different games. Back in early 2016, we were asked by Smirk & Dagger to provide input regarding the title of a game. We were provided five name samples with box designs and taglines. So every time I play or recommend Dead Last to people, I take pride in knowing I had a little help in naming it. 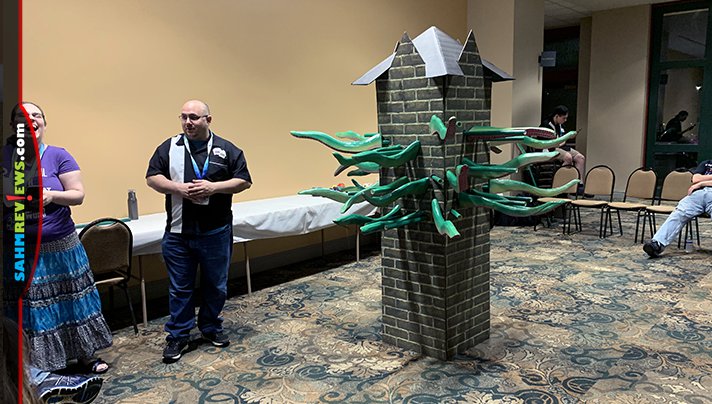 At Geekway last year (or maybe it was the year before), Curt from Smirk & Dagger asked us to try a prototype of a game that he had been working on. Scott and I shared thoughts on what we thought worked and didn’t and whether we thought it was fun. That game ultimately released as Tower of Madness, a game for 3-5 players. When we attended Geekway this year, I was excited to see a giant version of the game set up for attendees to play. 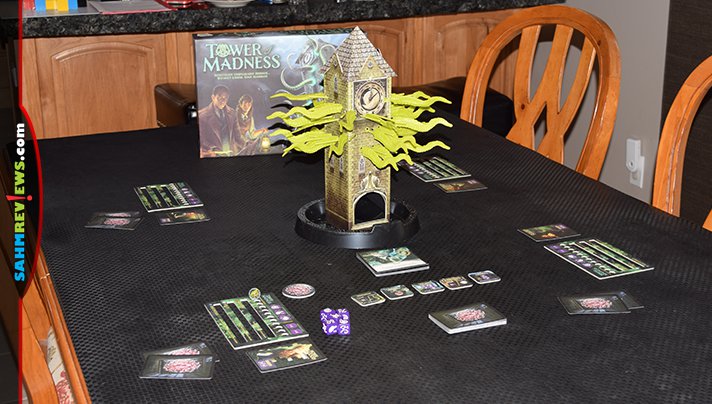 To begin the game, players decide if they’ll play as investigators with or without abilities then all players select one to use. Each player also takes a Tracker board. The assembled tower, filled with marbles and tentacles extruding, is placed in the center of the table within reach of all players. Influence tokens are placed in a general pool to the side. Shuffle the deck of Spell cards then each player takes two. The others form a Spell deck for use throughout the game. The Clock Tower is removed from the stack of Location cards. Shuffle the remainder and deal a designated number (based on player count) to form a new Location deck. The Clock Tower is placed on top as the first location to explore. Determine a first player and give them the Lead Investigator marble and the five dice. You’re ready to tackle the Tower of Madness!… or are you?! 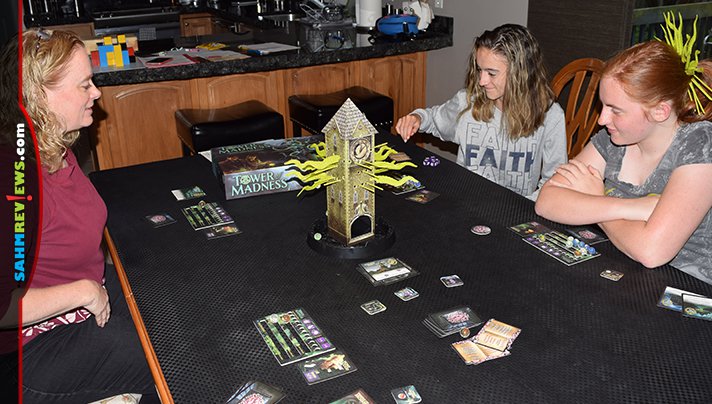 The object of the game is to successfully investigate all the locations before the third DOOM marble drops from the tower. BUT…  this isn’t a cooperative game. Even if you’re able to successfully navigate the situation and complete the necessary investigations, only the investigator with the most Discovery points is declared the winner. BUT… it isn’t just about one winner and everyone else taking second. Things can happen to make you lose your mind and turn to the dark side. You definitely won’t win the game if that happens, however you’ll get to take pride in knowing you brought your former colleagues to their doom as well.

The game takes place over several rounds that consist of 1) Revealing a new Location card, 2) Player turns, 3) Awarding points to the Lead Investigator and 4) Moving the first player token clockwise to the next player to start a new round. In the first round, the Location is set as The Clock Tower. In subsequent rounds, the next card on the Location deck is revealed and the special rules are read to all players. Special rules mix things up from round to round and are in effect for ALL placers for ALL dice rolls during the entire round. 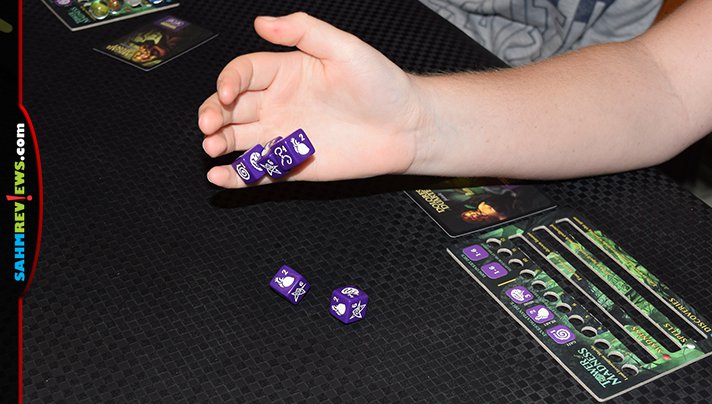 On your turn, you’ll roll in an attempt to investigate the location. To do that, you’ll need to collect dice results that equal one Gate, one Heart and one Mind. On each roll, you will need to lock at least one die into your Tracker Board. If at any point you get stuck, you can use one of the “Discovery Dice” slots to lock in a random die and continue your turn. If you succeed in getting the Gate, Heart and Mind results, then you’ll total the two random dice and move the yellow Lead Investigator marble to that total on your board. If subsequent players are able to complete the investigation requirements, they’ll total their Discovery Dice as well. If their total meets or exceeds yours then they become the new Lead Investigator. If they do not exceed, then you retain the title. 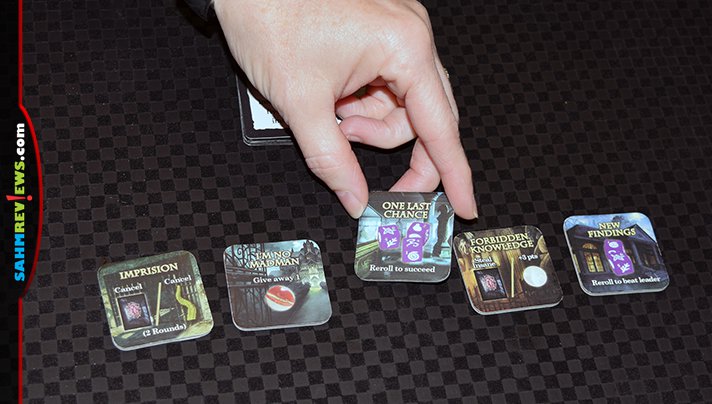 In the course of your investigative rolls, if a single roll results in exactly two 5’s (no more, no less) then you may claim one of the Unnatural Influence tokens. These are bonuses you may use once per Round and most are returned to the pool (used or unused) before the next round begins. 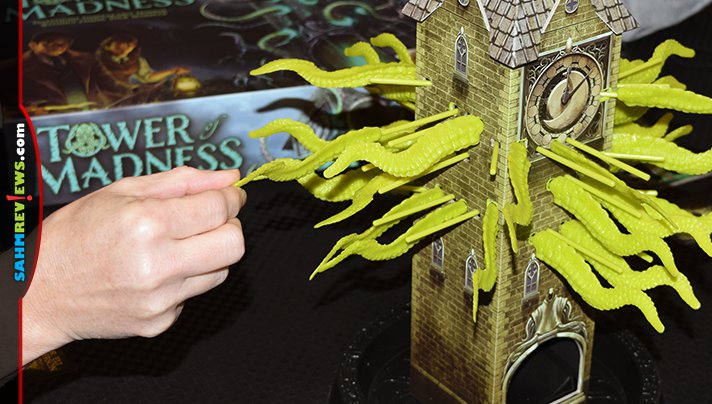 However, should you fail to meet the investigation requirements, you’ll need to pull a Horror tentacle from the Tower. The tentacles represent Cthulhu’s quest to cross over to our world and each time one is removed from the tower, the crossover draws closer. 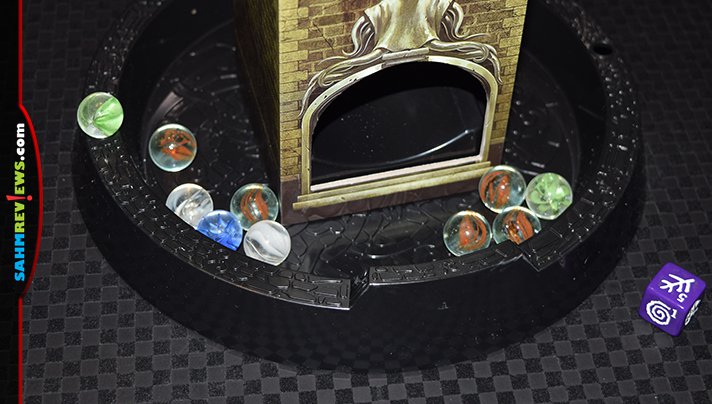 These tentacles are holding back four kinds of marbles: Discovery Marbles, Spell Marbles, Madness Marbles and DOOM Marbles. Sometimes you’ll get lucky and none will fall. Other times you’ll have several fall! Each has their own purpose and effects that you must deal with should they fall during the tentacle removal process!

It’s easy to keep track of how many you have because your player board has spots for each one. Discovery Marbles award you three Discover Points which will help you in your quest for victory during the end game scoring. Madness marbles track your progress toward insanity. If at any point in the game you amass four Madness marbles, you immediately become Insane. Insane players are no longer Investigators so instead of rolling dice on your turn, you would work to aid the rise of Cthulhu.

Spell Marbles allow you to draw a Spell card. Spell cards are two sided and you’ll use the one relevant to your current mental status. The spells vary based on whether you’re Insane or still an active Investigator and offer abilities such as adding two to your Discovery dice total (Sane), rerolling any number of dice you just rolled (Sane) and Forcing the player with the least Madness to draw a Horror from the Tower (Insane).

The game continues until one of two things happens. If Investigators successfully complete the last Location in the deck before the third DOOM marble drops, the Investigator with the most points wins. If the third Doom ball drops, the game ends immediately. If it was an Insane player that caused the final DOOM ball to drop then that player wins. If a current investigator’s Horror pull resulted in the last DOOM then there are no winners, but Insane players may take joy in knowing they played a part in the process.

While it isn’t quite as anxiety-inducing as Paramedics: Clear board game, Tower of Madness certainly will get your heart racing. Check with your local game store to see if they have copies in stock, otherwise you can find Tower of Madness on Amazon. Smirk & Dagger continues to release great games and we’ll continue to showcase them here. We’ll soon be telling you about another one we playtested at Geekway! Investigate their Facebook and Twitter channels to see if you can figure out which of their games we’ll feature next!