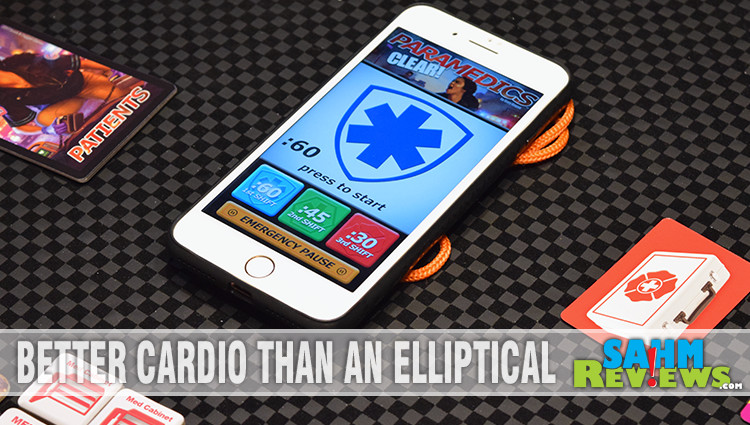 If you’ve ever had the need for an ambulance, you understand the impact that team of individuals has. Whether it’s for a life-threatening incident, a transport to a larger hospital, a broken bone or something else, it’s an emotional roller coaster for all impacted. Yet, despite the chaos of what is likely a one-time event for the patient, it’s an everyday occurrence for the medics. They’re always focused as they go about their job while the patient and family are struggling to grasp the severity of the situation. 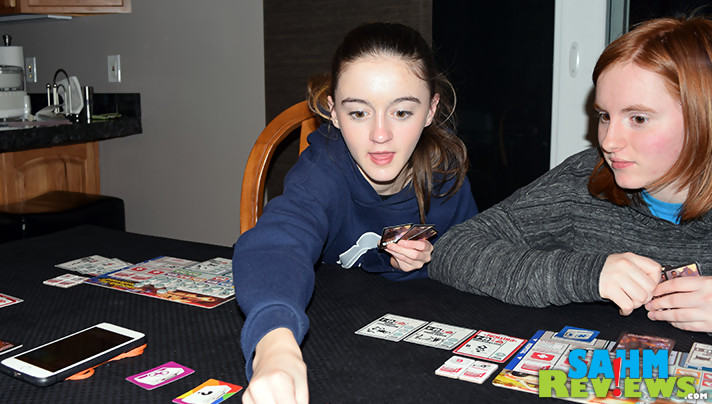 Kennedy has been expressing an interest in pursuing a career in some field of medicine and while she has said she’s mostly interested in something relating to sports, I’m sure she would make a wonderful doctor of any type.  When I first heard about Paramedics Clear! from Smirk & Dagger Games, I immediately thought it was a cooperative game. After all, medics work as a team for the best interest of the patient. That’s not the case at all. It’s a full-on “I’ll save more people than you will” battle. While I originally felt it would be a fun family way to support Kennedy’s interest in medicine, I’ve come to realize that it did something even more valuable… teach her about the stress involved with emergencies.

As in real life, there’s a constant timer ticking. The Paramedics Clear! companion app has a digital timer controlling player turns. 60 seconds in the first round, 45 seconds in the second and 30 seconds in the third. Those of us who like to spend a little extra time planning our moves quickly learn that we’ll lose patients if we don’t think (and act) fast. Kind of ironic since my opponents often lose patience with me when I take too long to take my turn! In Paramedics Clear!, I still get frantic trying to decide what to do but at least the issue is resolved when the timer goes off. 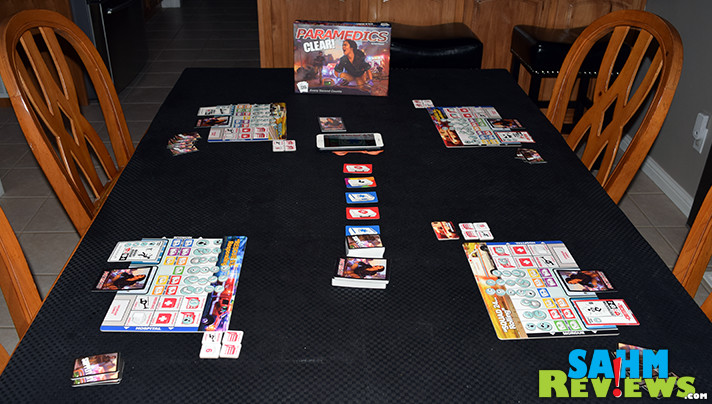 Take your time as you set up the game because it’s the calm before the storm. Let me repeat… enjoy the setup because you won’t have time to breathe until the game is done. Each player has their own Ambulance player mat, a set of Medical Supply tokens (Blood, Syringe, Oxygen, Meds, Bandages and Casts), a set of upgrade tokens and five cards from the Supply Deck. Each player takes two Patients cards then selects the one they want as the victim they’ll be working on first. The card they did not select will be placed face down on the Back Up Gurney on the player to their left. One of their available supplies may be placed into each of the open Medical Cabinet spaces to be used to treat their first patient. In the center of the table, you’ll place the Patient cards and Supply card draw piles as well as five face-up cards from the Supply Deck to form a row of available supplies. 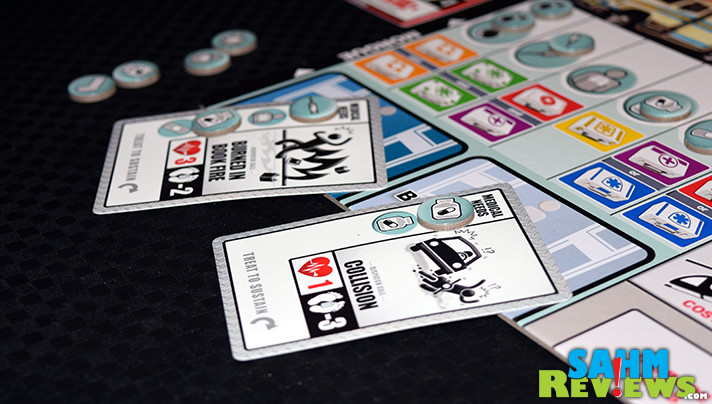 Your goal is to safely transport patients to the hospital; after all, we’re paramedics. To do that, you’ll need to fulfill whatever medical needs are noted on their patient ID card. If you sustain or save them before the timer runs out, great. If you don’t, they die and you’ll earn negative points at the end of the game. Scratch that. I should say “When” not “If” because you WILL kill some patients, especially when you get to third shift! If you’re eventually able to get a patient safely to the hospital, you’ll earn victory points as noted for each patient. Some are easier than others so make note of the requirements when you’re selecting which to keep and which to pass along to an opponent. Some patients are already in Critical Condition… pay close attention to those! 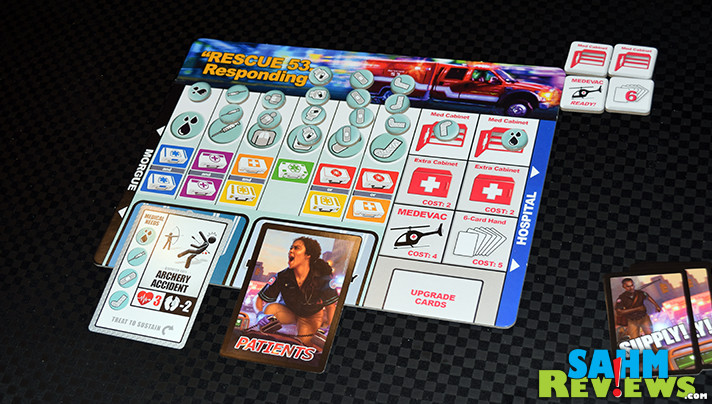 On your turn, you’ll follow a series of steps. Note that the app will tell you when it’s time to begin and you indicate that you’re starting by announcing your ambulance call tag. From there, the race is on! In the first round, you’ll already know your patient. Beyond that, you’ll be working on patients you sustained from prior turns or you’ll be grabbing two from the Patient deck and selecting one to work on. The only time you’ll begin your turn with an empty Main Gurney is if you transported your patient to the morgue at the end of your prior turn. Flip over any patients that are laying on your Back Up Gurney… You know, the one your opponent so kindly passed along to you. You’ll want to start anticipating their needs as well. 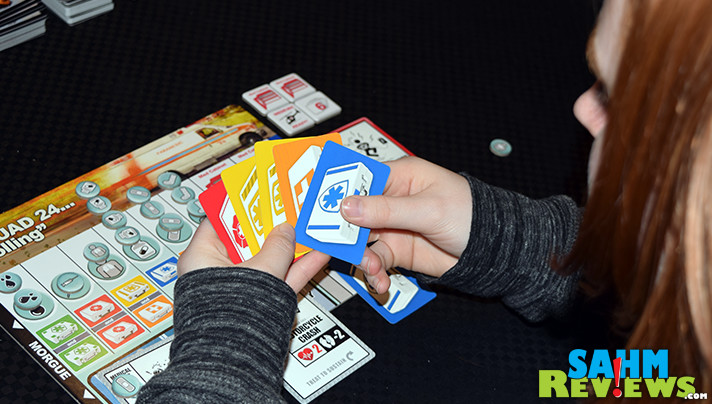 In order to treat patients, you’ll need to grab supplies from your Medical Cabinet or by creating tokens through playing supply cards from your hand. This is the most important part of your job so make sure you complete all necessary actions! You can sustain patients by adding one Medical Supply token to their card then tipping the card and calling out, “Sustained!” You may swap cards from your hand with those in the Supply Row in the center of the table. You can also ask other players for help by offering two supplies you don’t need for one that you do. There’s a five-card hand limit so this uneven trade may allow you to save your patient but at the same time gives your opponent one extra card to begin their turn. 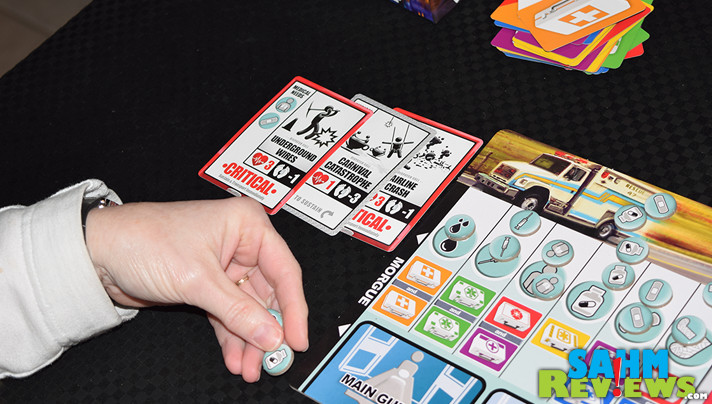 You must address at least one item on each patient each time you’re called upon or they get sent to the morgue. Critical patients need to have their injuries completely met. On those rare occasions when you get a critical patient near the end of your shift, you better hope you’ve set enough supplies aside in the cabinet to tap into. Me? I’m lucky if I can remember to treat each one… let alone set aside supplies for future patients! 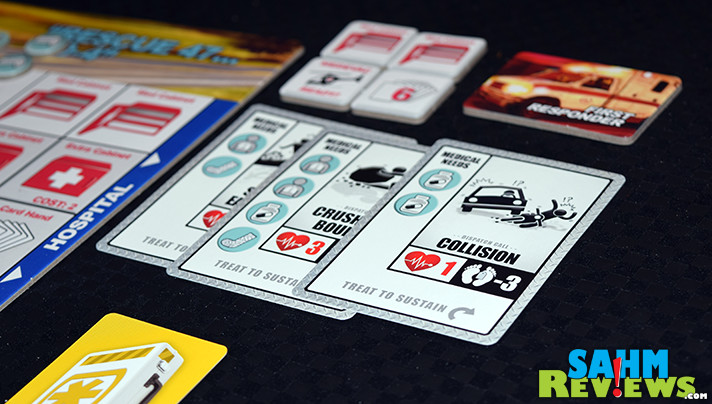 In order to transport a patient to the hospital, you’ll need to make sure they are stabilized by meeting all the medical needs denoted on their card. When you do this, announce, “Transport” then immediately physically move the card to the side of your player mat. If it was the patient on your Main Gurney, draw two new ones, selecting one for your Main Gurney and the second discarded to an open Back Up Gurney of an opponent. You’ll need to meet at least one of the needs of this new patient and sustain them before time runs out or that patient will die!

As soon as you finish your turn, stop the timer before it runs out by calling, “Clear!” then reset it for the next player. While the new player is getting ready to begin their turn, you’ll be responsible for cleaning up any mess you made so it’s in tip-top shape for the next medic. Each round continues until the Supply Deck has been depleted. This process repeats as noted above with a significantly shortened timer. At the end of the game, you’ll earn victory points for each patient saved, lose victory points for those in the morgue and earn bonus points for any Upgrades earned. I didn’t go into detail about the upgrades, but those are earned by cashing in cards during your turn that allow for extra cabinet space, increasing your hand limit and getting an emergency Medevac.

Paramedics Clear! is a fast-paced game that requires careful planning in the short amount of downtime you have between your turns. The companion app is free to download and the game is available on the Smirk and Dagger website or can be purchased for just over $30 on Amazon. Check out their other “take that” titles in the Smirk & Dagger line as well as some lighter ones in their new Smirk & Laughter line of games. Need an update STAT on what they’re up to? Follow along with them on Facebook and Twitter for the latest news!

Have you ever been in an ambulance?