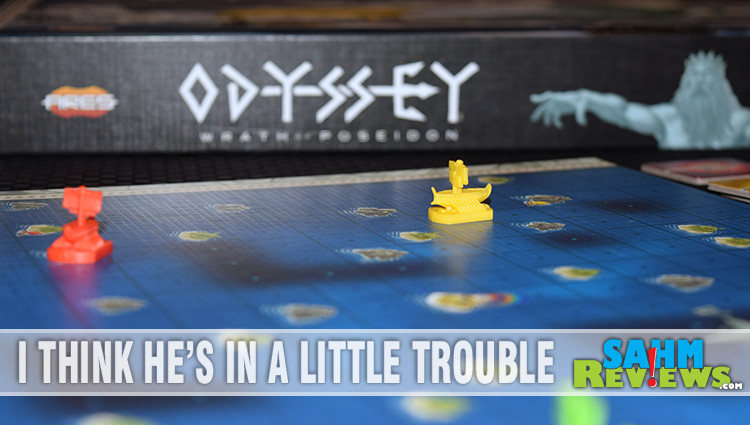 Our oldest daughter has always has a fascination with mythical creatures and heroes. I think it really blossomed when she read the entire Percy Jackson series of books. Nicole read them at the same time and would have lively discussions about the different gods and their powers, beliefs and personalities. When they eventually watched the movies, there was agreement about critical scenes left out and whether the films did justice to the books.

I briefly touched upon our fondness for games with a Greek or Roman theme when we played Sellswords Olympus last week. It’s a re-theme of the hugely-popular Sellswords featuring your favorite Greek, Roman and mythical personalities. It plays with the same rules and the cards can be combined into the original game to create an epic battle between the gods and popular anime characters!

But our preference is still with old European lore, so when we discovered Ares Games‘ new Odyssey: Wrath of Poseidon and the fact that it plays semi-cooperative, we knew it was one we needed for our collection. If you’re not familiar with the term, semi-cooperative simply means that you’ll play as a team against one other player. Also called “one vs. many”, it is a good choice for a game where the family want to take on dad! 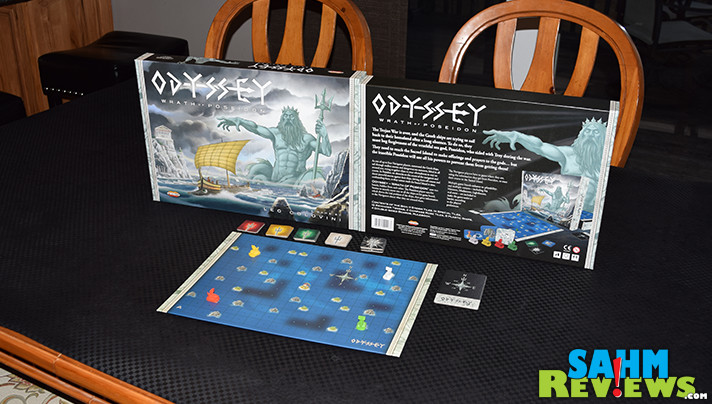 Setting up a game of Odyssey: Wrath of Poseidon is very quick. Included in the box are four double-sided game boards with a total of four different maps (labeled “A”, “B”, “C” and “D”). Players choose two matching maps and lay them head-to-head. A compass tile is placed next to the board so everyone is familiar with the map’s direction and the game box is set vertically between the two boards. At no time may Poseidon see the other players’ board and vice-versa. Both boards are populated with colored plastic ships in their starting locations. This may be the last time both boards match each other exactly.

The sole player (aka “Dad”) takes on the role of Poseidon who is trying to prevent the other players’ ships from reaching the Sacred Island in the center of the board. Because Poseidon peers down from above, he can see the exact location of each vessel. But each ship’s captain is not so fortunate. They can only see what is close by their ships (this is LONG before the invention of GPS) and have to guesstimate their positioning with these clues. 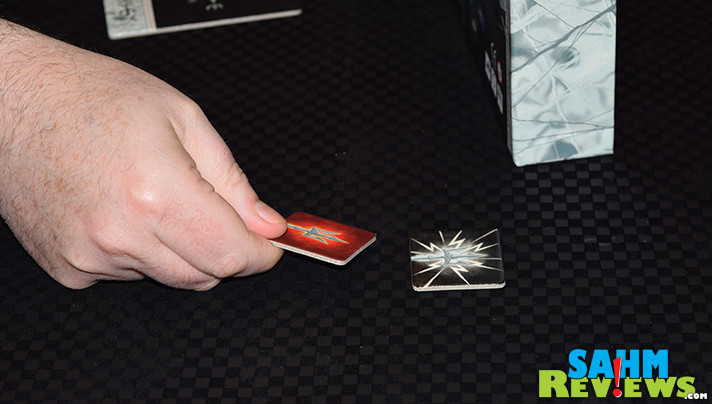 Poseidon begins the game with eleven storm tiles. This is the only way he can move the ships. Each ship’s color is represented on two of the tiles, with the remaining three tiles having a large black storm cloud. Poseidon: Wrath of Poseidon is played over eleven rounds (eleven tiles) with Poseidon going first, followed by the other players in any order. 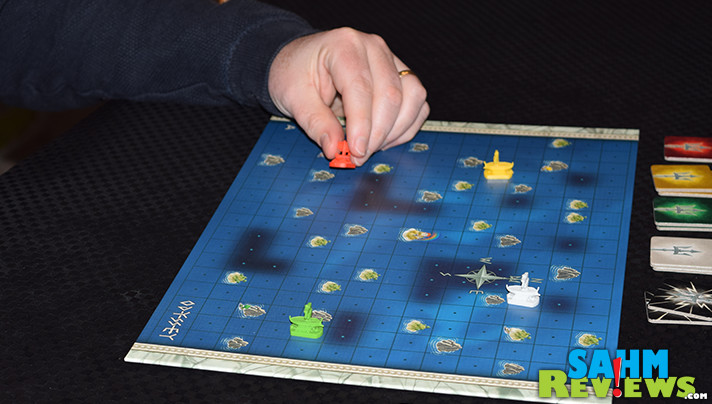 During each round of Odyssey, Poseidon will play any storm tile of his choice. This allows him to move the ship of the matching color (or all four ships when the black tiles are played) one space in any direction from their current location. The ships are physically moved on Poseidon’s map and obviously the captains will not know which direction they sailed. Next, each captain will move their ship one space in any direction and call out the actual direction of movement (Southeast, for example). Both the player and Poseidon will move the ship on their map in that direction. At this point only Poseidon’s map accurately represents the location of the ship. 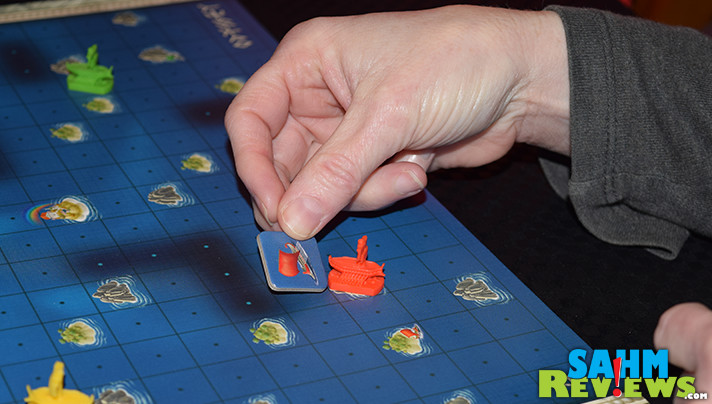 Poseidon must then provide clues as to the ship’s actual location by revealing detailed information about the space they occupy. If they are on an island, they are told that fact along with the island type (woody, rocky, etc.). If their space is dark blue, they are informed they are in the deep sea. If they are on the same space as another ship, that ship’s color is revealed to them. 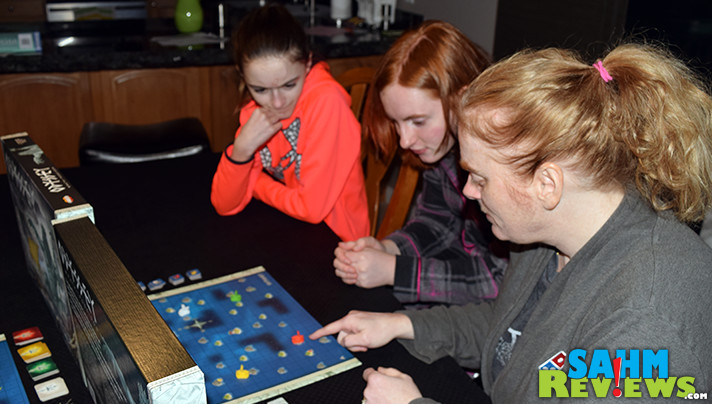 Information about the surrounding area is also given, but without as much detail. Studying the eight surrounding spaces around the ship, Poseidon will announce how many island are “within sight” in those squares. If other ships are close by, that will also be noted, but without the ship’s color. Deep sea isn’t something that can be seen from a distance, so even if in the next square, those details aren’t revealed. The player then may use any of their temporary tokens to mark possible locations on their side of the map to help them narrow down their actual location.

After all four ships have been moved and hints revealed, the next round begins with Poseidon choosing another storm tile. This continues as players move their vessels closer to the Sacred Island in the center of the board. When a ship successfully reaches the island, their ship is removed from the board. At the end of eleven total rounds (about 30 minutes), if three or more ships have reached their goal, all of the captains win the game. If only one or two succeed, Poseidon wins along with any players who did navigate to the Sacred Island. 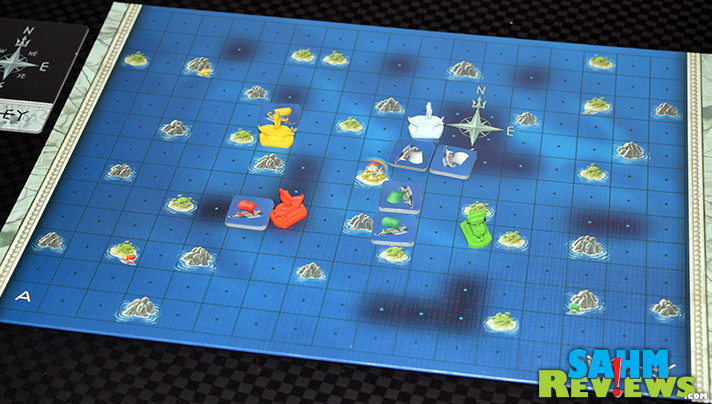 While it would seem that Odyssey: Wrath of Poseidon is best played with the full compliment of five, if you have fewer participants you will simply choose more than one ship to control. And while the box rates the game for ages 13+, this is one that can easily be enjoyed by kids as young as six or seven when playing with their parents.

It can sometimes be difficult to find the great titles by Ares Games here in the US since they are a UK-based company. Fortunately there are a number of copies of Odyssey: Wrath of Poseidon on Amazon and you might have luck finding them at your local game store. Check out their website for a number of familiar titles (including Last Friday!) and be sure to follow them on Facebook or Twitter to see what’s in store for this summer!

Have you played any of the games by Ares Games?