We’re suckers for games with quality components. Years ago we purchased an expensive Chess set, even though the game plays the same with plastic pieces. And our preference for games that use real wood is no secret. The few times we’ve found sub-par components only gives us the opportunity to upgrade them ourselves.

A game doesn’t have to be overly complex to benefit from quality pieces. In fact, by purchasing copies that have well-made components means the game will probably last a very long time, no matter how many times you play. And when it’s a game that requires a lot of handling or grabbing of parts, quality certainly comes into play. Such is the case with our latest speed-based game, Cobra Paw by Bananagrams.

Included in the hexagonal box are 21 tiles and two oversized dice which all appear to be made from the same materials. At first I assumed they would be some type of plastic, but the temperature and weight seems to suggest some type of composite clay. No matter the actual composition, you can instantly appreciate the quality just by picking up one piece and feeling the weight. These pieces will last a lifetime.

But even a game that lasts a lifetime isn’t worth much if it sits on your shelf unplayed. Let’s take a look at how Cobra Paw is played and if it will be a good fit for your family! 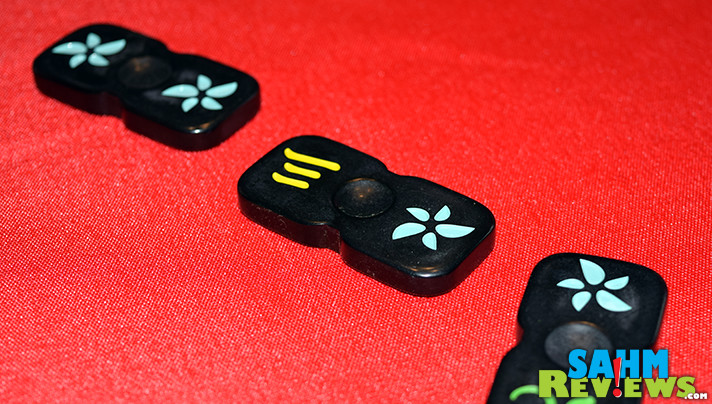 You and up to five other players are ninjas. Not just any ninjas – cat ninjas. And you are entering a local tournament of tile snatching, trying to defeat the current champion, Master Meow. Master Meow has perfected a snatching technique called the Cobra Paw, and it is your turn to imitate the method to dethrone him and become the new champion. 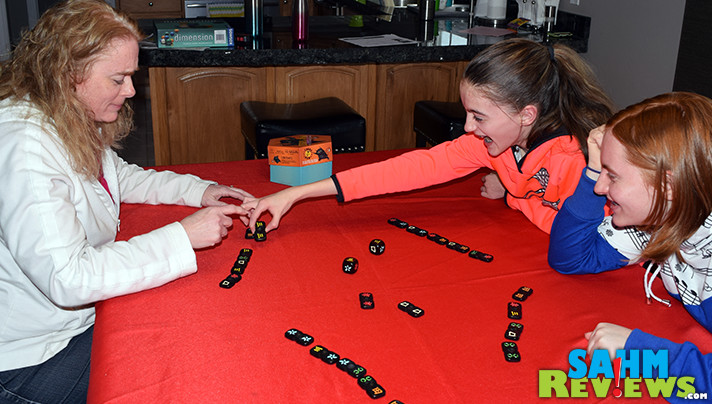 Setting up for a game of Cobra Paw is very quick. Just take the 21 tiles and lay them face-up in the middle of the play area. Each tile has two symbols on it, which coincides with the symbols on the two dice. One player will roll the two dice and everyone races to snatch the one tile which matches their result. 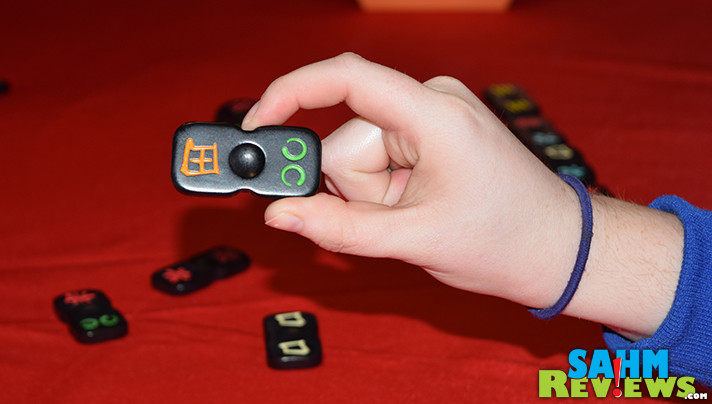 This is much more than just slapping your hand down and grabbing the tile. That is a dishonorable technique and you will be penalized for doing so. You must employ the Cobra Paw technique, which means only using your fingertips from one hand to pick up the tile. If two players get their paws on the tile at the same time, the ninja with their fingers closest to the center of the tile (tiles have notches in the middle) wins the tile.

When you successfully snatch the correct tile, it is placed in front of you within reach of all players. This is because if the dice roll results in the same symbols, people will try to snatch it from your tiles! Therefore, you may not hover your hands over your tiles or the pool. Everyone needs to be able to see all tiles at the same time. The first player to collect six tiles into their personal pool wins Cobra Paw!

At a MSRP of only $15, you should be able to find copies on Amazon or your local game store for immediate purchase. You’re probably already familiar with the publisher, Bananagrams, thanks to the success of their first game by the same name. They have expanded well beyond that first hit, so check out their website to learn more! They’re also very active on both Facebook and Twitter if you’re interested in seeing what they’re working on next!

Do you own any games with both ninjas and cats in them?