Over the past several months, Scott and I have really upped our game on introducing the girls to some of the highlights from our own childhood. We’ve played some games and watched some movies with them. Even with the antiquated graphics and production quality, some classics like Ferris Bueller’s Day Off are worth watching. Last week’s addition to the throwback list: Futurama. It’s only a matter of time before they are ready for something more intense, like the Nightmare on Elm Street or Friday the 13th movie sagas. The anticipation associated with movies in this category isn’t something you can easily replicate. Thrill rides and extreme sports have the potential to cause physical harm whereas a movie provides you with the thrill right in the comfort of a cushy theater seat. We have, however, discovered another way to bring this adrenaline rush into your world: a board game. 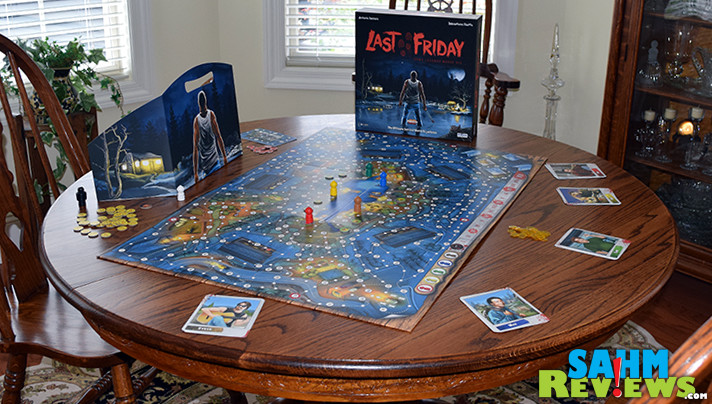 I’ve said many times that cooperative games are my favorite genre. I’m not a vindictive person so while I like to win, I don’t like to do it at someone else’s expense. Mostly. Okay, sometimes I do. Last Friday by Ares Games is a merging of these two ideas. Simultaneously cooperative and cutthroat. One vs many. Be cautious yet be aggressive. Top it off with a horror movie theme and there is excitement with each move. 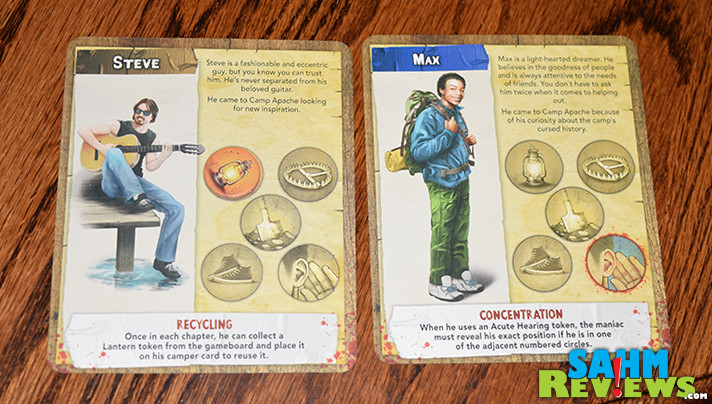 Let me set the scene for you. (Insert ominous music here.) There’s a camp in the woods where things aren’t quite right. The owners of camp have been murdered. The maniac is trolling the camp at night looking for more victims and as (un)luck would have it, you and a handful of friends are about to start your weekend camping experience at that very location. Last Friday accommodates 2-6 players with one playing as the maniac and all the others dividing the campers among them. If 5 people are playing campers, each has their own color. If less than 5, some players will control more than one. There are cabin keys, bear traps, lanterns, sneakers and other clues scattered throughout the map that campers will be attempting to gather to aid in their quest for survival. 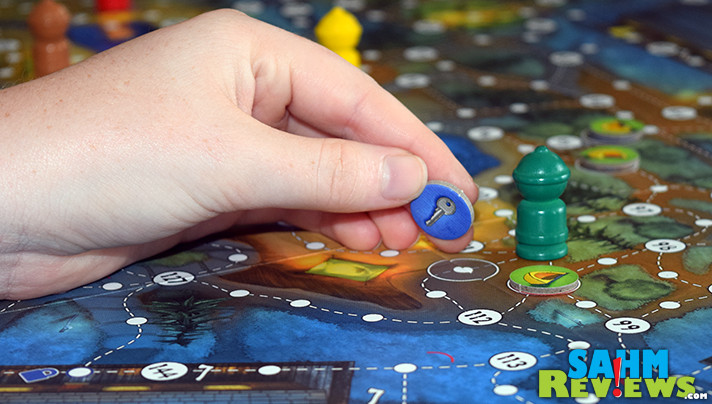 Akin to the movies, the game takes place over four chapters. In the first one, the campers are arriving at camp, discovering the terrifying situation and striving to find keys to unlock the cabins before nightfall. In Chapter II, the campers have secured some weapons, mustered some courage and are venturing out to find the maniac. The third chapter brings the realization that the maniac is like a cat with nine lives and continues his hunt. Does this dude ever die? The final chapter sends the maniac on one last hunt and massacre with some campers sacrificing themselves in the hope of saving the chosen one.

The movement process is very simple. The campers move along the white dots while the maniac moves along the numbered ones. The maniac’s dots are further apart but he only moves one at a time. The campers’ steps are closer together but they are allowed two per turn, more if they use bonuses. In early rounds, the campers unlock the cabins for safety whereas the maniac is breaking down doors with an ax to utilize secret passages in future rounds. 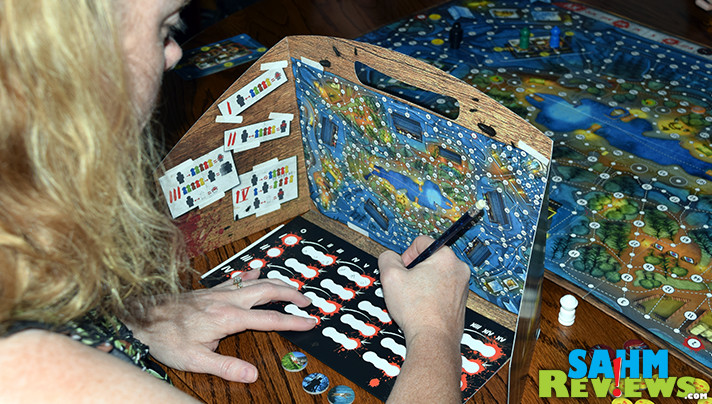 Curious how this all works? From behind a privacy screen, the maniac chooses a place to start. Each action he takes is documented for future reference and verification. Every three turns, he reveals information about his location. In some rounds he is referencing where he was a few steps prior. In other rounds, he shows where he is at that time. Whenever he reveals a location through this process, he drops a clue that campers can grab as they pass by. Some of these clues are useful (such as the lantern or sneakers) while others are more disturbing – a corpse! Unfortunately, when a new clue shows up, it means the maniac is nearby. When the maniac is on the prowl, he is sneaking throughout the board trying to cross paths with his victims, leaving their bodies in the wake. In rounds where he is being hunted, he is hiding as he awaits his turn to stalk again. In either situation, it’s an adrenaline rush! 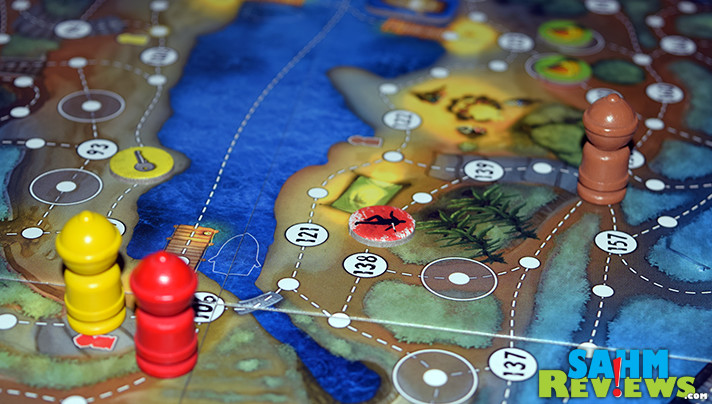 When a camper is murdered, a corpse marker is left in place, hindering the movement of those remaining. They’ll need to use a shovel to clear the path before proceeding forward. How do they get a shovel? Those clues that the maniac left along the way. The clues are designed to give players some type of advantage. As an example, the lantern lights up the path surrounding it so if the maniac crosses through that area, it immediately reveals his location. Sneakers allow players to move an extra space and the coveted keys allow campers to take up sanctuary in the cabins. Unfortunately, each camper can only carry one key and need it to open the matching cabin. Good luck with getting where you need to go without the maniac catching you before you get there. While he’s working behind a screen and hiding in the shadows, you aren’t so lucky. If you’re carrying a key and heading toward a cabin, he knows it. Hide… or run fast… or hope another camper looks like better prey. 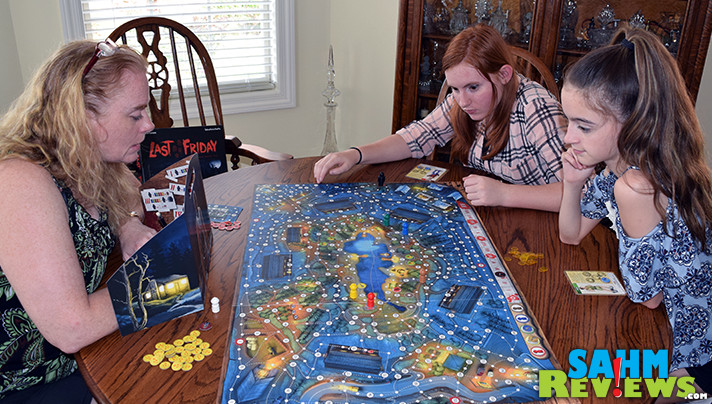 Ultimately, the goal is to stay alive, but it isn’t as easily as being killed or make it to safety. There is more depth and discussion involved and the game is designed to keep it from being over that quickly. At the end of each chapter, either the campers receive a bonus going into the next round or the maniac does. This is determined by how many people have died and how well the campers have cleared away corpses. If a camper dies, at the beginning of the next round a new camper may take this newly opened slot. This allows continual character balance and cooperative engagement between all the campers. A game can run up to 45 minutes PER CHAPTER but there are provisions to make it shorter by playing only one chapter. Whether it’s one chapter or four, the game is filled with anticipation!

If you are up for a game night thriller, you can pick up a copy of Last Friday from Ares Games’ website or on Amazon for under $39. They offer several titles that range in thematic style and complexity. Visit their website to learn more about their various games or stalk them on Twitter and Facebook for exciting updates!

What is your favorite scary movie, book or game?