One of the fun things we’ve been doing during this shutdown is introducing our girls to classic movies. We’ve already watched the entire Back to the Future trilogy, enjoyed Beverly Hills Cop, laughed during every example of National Lampoon’s Vacation series and have recorded a couple of the first Terminator movies. We have yet to explore some of the scarier options of my generation like Friday the 13th, Nightmare on Elm Street or Chucky. And while we’ve watched all of the Star Wars films, there’s another popular movie series we haven’t caught online yet – Jaws.

Every year we see all the commercials for Shark Week on Discovery. I always comment to my girls about ones I think would be cool to watch. And every year I get the same disgusted and scared looks from them. Needless to say, we never get to watch any. Coincidentally, Ravensburger just issued their new Jaws board game! Perfect timing to both get them warmed up for Shark Week and prepare them for the inevitable screening of the Jaws movie! 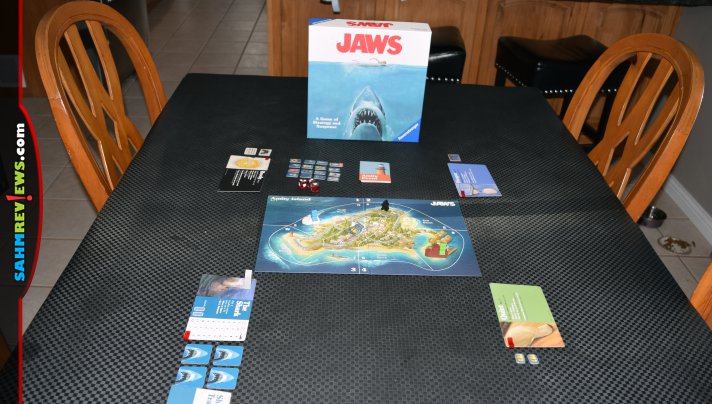 This Jaws board game is a little different than others we’ve played recently. It is best described as two games in one since it features two completely different Acts that should, for the most thematic experience, be played in order. Thankfully, the setup for both Acts is very quick and doesn’t take away from the excitement. 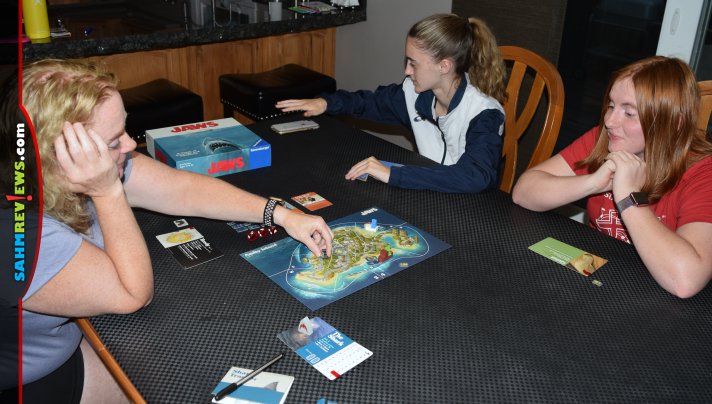 After setting out the board to the Act 1 side, shuffle the Amity Event cards and place them in a face-down deck near the board along with the 16 swimmer tokens. One player will play as the shark, while the rest will take on the roles of the movie’s main characters – Quint, Brody and Hooper. These roles will not change between Acts and characters come with a corresponding board listing their unique abilities. 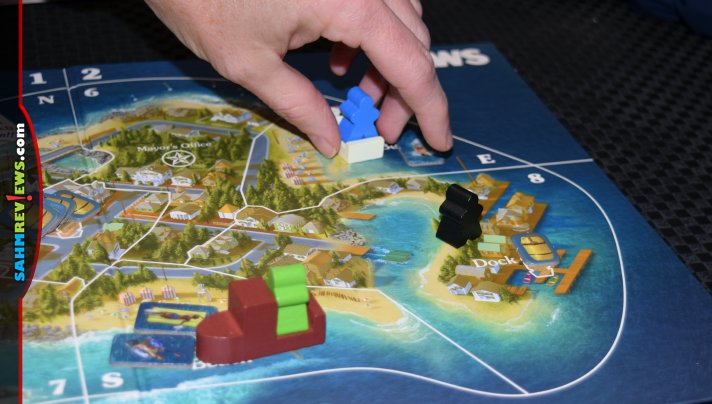 The shark’s goal in Act 1 is to eat as many swimmers as possible while avoiding the other players. The crew wishes to locate the shark and attach two barrels to it while also protecting the swimmers. Each round of Act 1 is divided up into three phases. 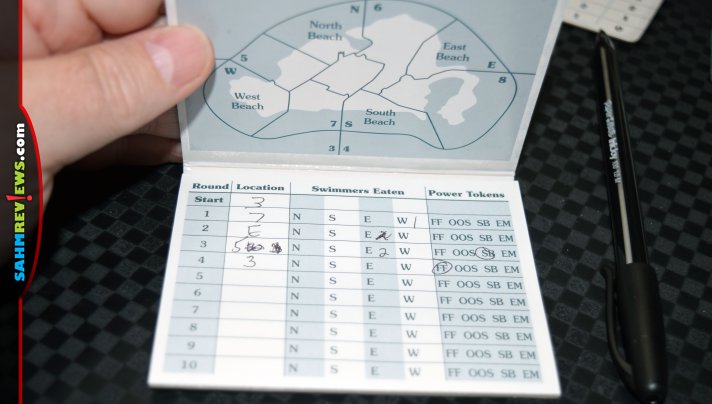 The first phase requires you to turn over the topmost card of the Amity Event deck and add new swimmers to the board as shown on the revealed card. Event text might also require immediate action or affect the game later in the round. Next, in the second phase, the shark takes their turn. The shark player may take up to three actions. These include moving through the water to an adjacent area or eating one swimmer in the shark’s current location. The actions are recorded on the shark’s Tracker Pad and not revealed to the other players. Once their actions have been taken, the shark announces the results of their turn (how many swimmers eaten, any motion sensors triggered or if a power token was used). Motion sensors are barrels left in the water by the crew, while power tokens award different special one-time abilities. 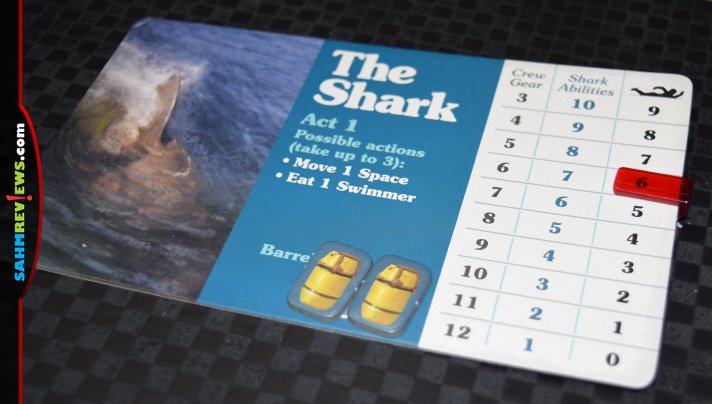 The third phase is when the crew steps up and takes their turns in any order. Each player takes up to four actions, with characters having different actions to choose from. These will range from moving, rescuing a swimmer, picking up or launching barrels, using binoculars or even closing a beach. 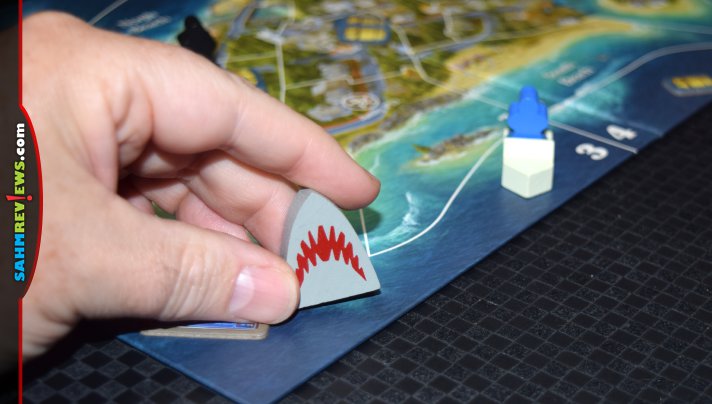 Act 1 ends immediately if the crew is able to attach a second barrel to the shark or the shark is able to devour his ninth swimmer. At that point, the game proceeds to Act 2. Flip the board over and lay out the tiles for The Orca, the crew’s boat from the movie. Setup will be determined by the final scores from Act 1 and dictate how many Shark Ability cards the shark player receives. The crew also received gear related to how well they performed in the previous Act and must split it among themselves. 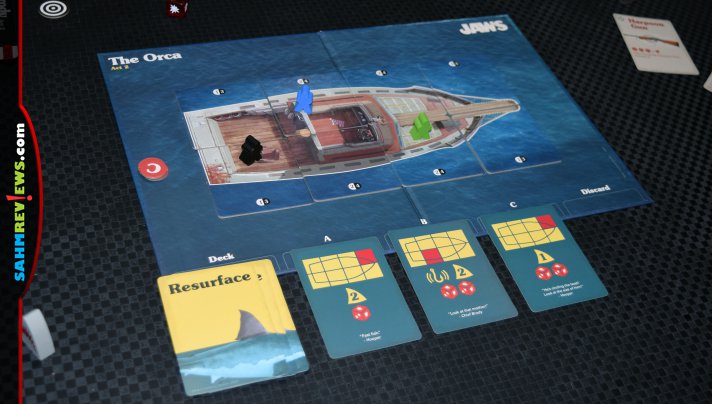 In this Act of Jaws, the shark will be resurfacing in one of the eight areas each round and the crew must try to predict which area to focus on. Three Resurface Cards are revealed and placed on the A, B and C spots. These cards show which areas the shark may come up this round along with battle values to be considered when resolving the round. The shark player will secretly choose which card he is targeting (and thus, the area) while the crew prepares by moving, choosing weapons and placing Target Tokens on the segments of the ship they will be attacking. 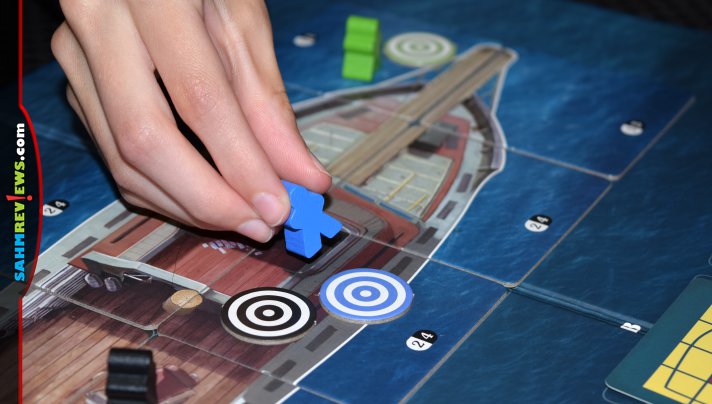 The shark player will reveal their chosen token and their Shark Ability card, if played, before moving on to the crew. Each crew member who targeted the correct resurface zone will attack the shark by rolling the custom dice and adding any weapon bonuses to the result. After subtracting out the Evade Value listed on the card, any leftover hits are added to the shark’s Wound Track. 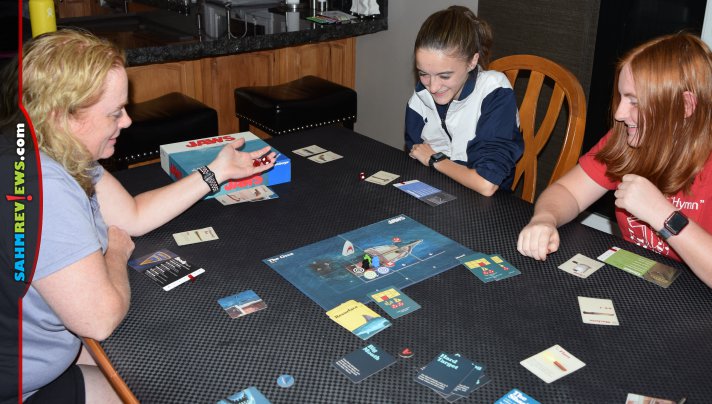 Of course, what would a game of Jaws be without an attacking shark? The shark player may choose to either attack the boat or a crew member in the water. You may choose one boat space to attack and it must be adjacent to the space you are targeting. If attacking a crew member, you can also target the space you are currently in. Each section of the boat shows two numbers next to it. The lower is the dice result needed to damage that section, while the larger completely destroys it. If you don’t roll high enough for either, it is considered a miss. If only damaging, the tile is flipped over to the other side to be used on later turns. No matter if the tile is damaged or destroyed, the crew member falls into the water and is now vulnerable to future attacks! 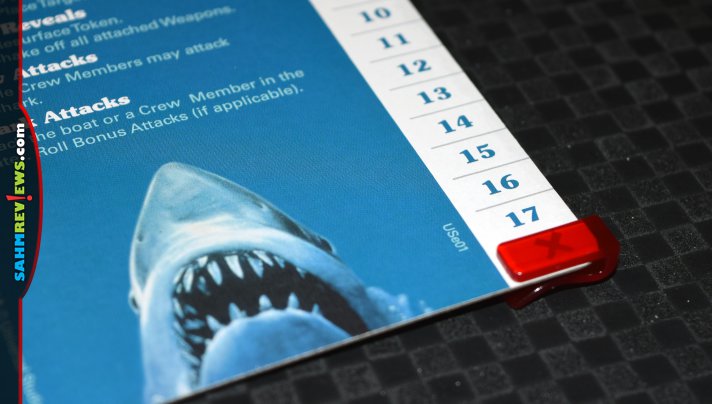 The Jaws board game has a similar feel as games like Last Friday or Letters from Whitechapel with its hidden movement and anxiety of being attacked by a predator that you cannot see in Act 1. Act 2 is just as tense, even if it more luck-based, and stays true to the theme of the Jaws movie with the slow destruction of The Orca. If you’re a fan of the movie, or love a one-vs-many board game, pick up a copy on Amazon, direct from Ravensburger or ask for it at your favorite local game store. They also have a number of other games in the works that also pay tribute to blockbuster movies, so be sure to follow Ravensburger on Facebook or Twitter to find out when they’re being released!

Are you old enough to remember seeing Jaws in the theater?

33 thoughts on “Jaws Board Game Overview”