I find the ebb and flow of board game themes to be fascinating. If you look through our archives, you’ll see that we cover a lot of similar genres in a short period of time. There were a whole bunch of games that included polyomino game pieces. We have offered overviews of many, many flip or roll and write games. Lately, it seems like city building games such as Zoned Out and Neom are the thing, each with their own take on the theme. Finding one with a unique feel when playing is a bonus. When we sat down to play Cities: Skylines from Thames & Kosmos, I was extra excited because it’s a cooperative game. And you know what? I LOOOVVEEEE cooperative games. As we got ready to dive in, I discovered that it is based on the popular Cities Skylines video game.

The mark of a good cooperative game is one that you can’t breeze through. We’ve been able to continuously enjoy The Crew card game for this exact reason. It isn’t easy and we were glad to see Cities: Skyline setting us on a similar trajectory. Our first full attempt at this cooperative game was not very long due to a combination of poor decisions and random bad luck. It didn’t take long to decide to shuffle things up and immediately start again. That’s a good sign… excited enough to try again after failing. The game boasts various scenarios which adds to the replay value, too. 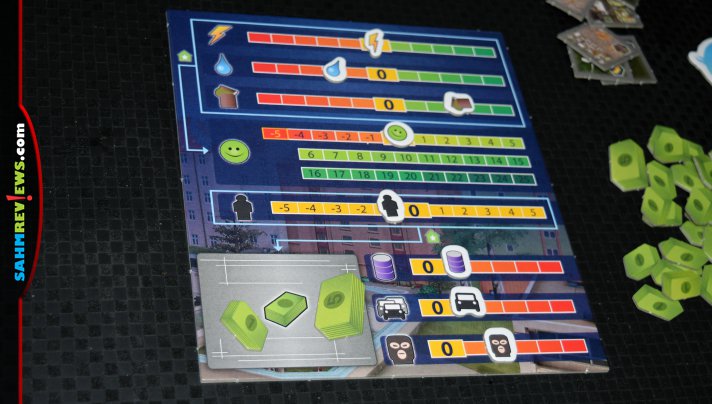 When you’re ready to play, you can either follow the scenarios or jump right in. When you’ve determined how many boards you want to use, arrange them in the center of the table with the cost side facing up. The administration board will be accessed on every turn so make sure it’s within reach of at least one player, if not two. Place the administration markers in their designated spots then add starting capital to the board. Separate the construction cards by stage and shuffle each independently. Make general supply piles of the building tiles, sorted by type. Pay the cost to flip one of the boards and you’re off and running.

On your turn, you’ll have three options on how to proceed. You may construct a building using one of the cards in your hand, exchange a card or end a milestone. Milestones are essentially the game’s rounds and you cannot end one until you’ve met the necessary requirements. At the end of each milestone, you’ll tabulate how happy your residents are and earn points accordingly. Keep that in mind as you make decisions! 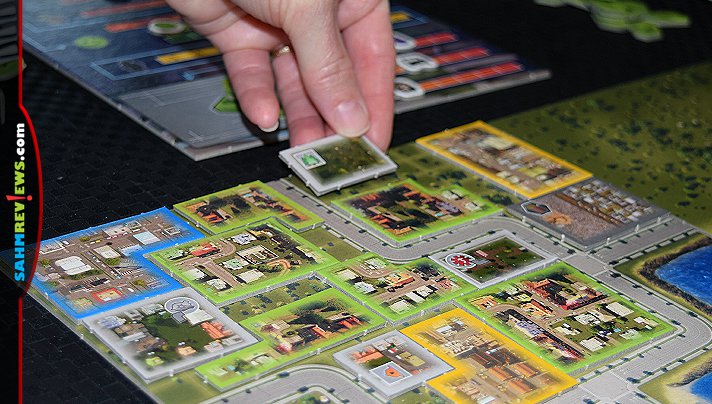 The construction cards are the meat of Cities: Skylines. Each player begins the game with a designated number of cards (based on player count). Green, blue and yellow cards represent residential, commercial and industrial zones. There are also service and utility buildings to choose from. On your turn, if you want to build one, you spend or adjust the corresponding resources and results. Sometimes it will be money, other times power, water or garbage. There are buildings that increase the crime, pollution and traffic as well. Cards offer a bonus if they’re placed alongside or in the same district as others. If you’ve met those requirements then you earn those bonuses on behalf of your team. Adjust the corresponding spaces on the administration board.

There are additional cards in the decks that can significantly impact the game. Unique buildings may allow you some flexibility and bonuses when building in the same area of the board. There might also be penalties. As an example, residents are happy when you build a stadium… but you also increase the traffic.

News cards aren’t so good. These stay in place until you end the milestone or another news card replaces it. These cards impede your ability to take certain actions, build types of zones or cost you money. You may potentially draw policy cards which offer one-time benefits when played in lieu of a construction card. 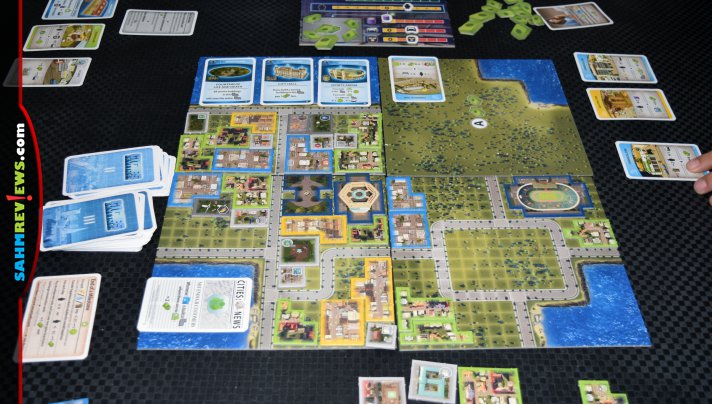 The utilities, impact and labor tracks on the administration board are limited. If you drop too far down on the power, water and garbage tracks, then you cannot build those cards. Likewise, if the pollution, traffic and crime tracks are maxed out, you may not construct a building that causes additional impact. In some cases, you simply cannot build. In other situations, you may be holding out for another planner to construct something so you can take advantage of a bonus. Whatever the reason, instead of constructing or ending a milestone, you may opt to pay $2 and exchange a card. 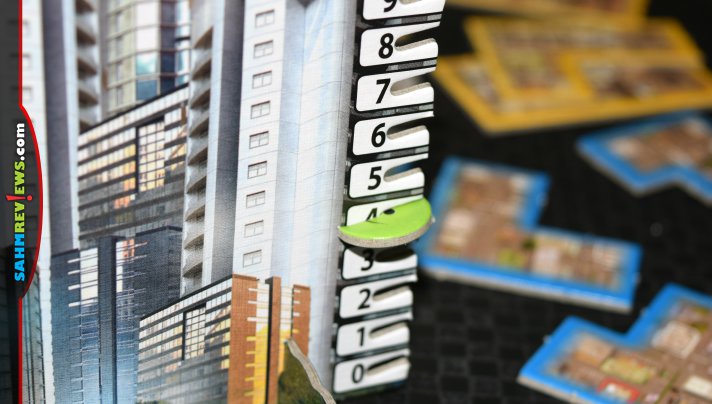 Whenever you end a milestone, you calculate your happiness (which translates to points) then deduct for unmitigated issues with crime, pollution, traffic, workforce and overtaxed utilities. Total points earned are transferred to a really fun skyline scoring tower. In order to finish the game, you need to have all board game pieces revealed and at least two tiles in each district. Once this happens, a player may trigger the final milestone and calculate the scores based on the administration board results. Utilize the success table in the rule book to find out if you’ve created a dying city, a heavenly city or one of the many possibilities in-between.

Even without knowing anything about the Cities Skylines video game, we’ve thoroughly enjoying bringing this board game to our game table. If you enjoy cooperative games or like to try analog versions of your favorite video games, pick up a copy of Cities: Skylines board game on Amazon, from your local game store or direct from Thames & Kosmos. Visit them on Facebook and Twitter to learn about some of their other titles including titles such as My City board game.

What video game would you like to see made into a board game?