You know how they say there are some wines that get better with age? And that some foods need to be tried multiple times before you acquire a taste for it. Well, the same applies to board games. Some are awesome right out of the box. The first time you try it, you want to play it again and again. As I explained in my Pipeline game overview, that’s not always the case. Sometimes you need to play it several times before you get the hang of it. Other times a game isn’t perfect. Whether Pendulum from Stonemaier Games is the former or the latter is hard to say. I guess it depends on who you’re talking to. Let’s run through a Pendulum game overview and I’ll point out what we liked and where we struggled. The idea behind Pendulum is that you’re a noble who is trying to succeed as ruler of Dunya when the immortal Timeless King went missing. With his disappearance, the iron clock in the plaza came to a stop, its pendulum awaiting a new leader to start it swinging, marking the beginning of a new era of rule. In order to win, you need to have the most victory points beyond a bare minimum of each type. Similar to the win condition with Senshi, players must divide their attention and resources to ensure all victory point tracks are raised. 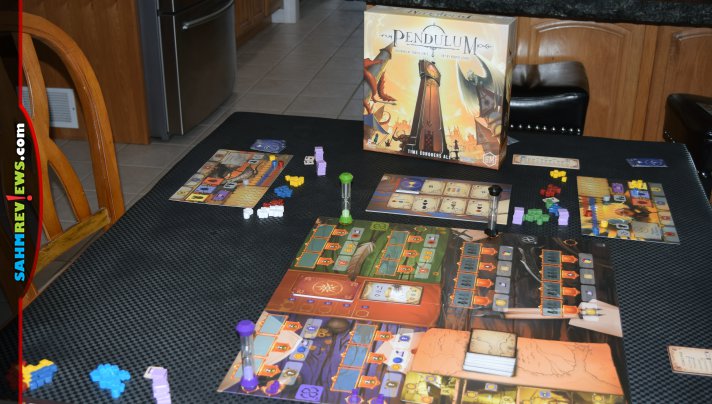 Pendulum is a real-time strategy game that utilizes timers to control the rounds. Our first thought was that it would have the chaotic feel of Kitchen Rush, but that game is cooperative. Pendulum… is not. The board goes in the center of the table within reach of all players and the council board nearby. People need to be able to easily reach different parts of the board without getting in other peoples’ way so it is an instance where a smaller table is better. Place the three timers on their matching circles on the board and the purple timer markers in the additional purples spots. Shuffle the decks of province, achievement and council rewards cards separately then set them on their designated areas and filling the appropriate spots. Randomly assign player mats (and the related cards), meeples, markers, resources and voting chips.

Each player board is unique, with varying victory point requirements as well as different stratagem cards and starting resources. In Pendulum, players will take their actions simultaneously so you’re never waiting for another player. The only limitations are whether a space is available to utilize and if you have the meeple and/or resources available to fulfill the requirement.

Each player has access to two different sizes of meeples. The larger ones can pretty much go anywhere, but you only have one and must earn a second. The smaller ones can only go to spaces that are empty or that allow any sized meeple. As with pretty much every worker placement game, part of the strategy of the game is intentionally taking a space that your opponents might need. In Pendulum, that problem is amplified in a couple of ways. The first is that two sections of the board include spaces where only the first worker there may be small or large, but all subsequent workers during the same time period must be large.

The other way to interfere with opponents has to do with the timers. There are three different sections of the board, each with two rows of three or four action spaces. Each of these three areas has a sand timer. One is set for 45 seconds, another runs for two minutes and the third is three minutes. You may only MOVE TO a space that does not contain a timer, however you may only TAKE the action when the timer is present. Not only are your opponents getting in your way (literally and figuratively), but the board is as well. The game will last four rounds with a round ending after the three minute timer has been flipped three times. 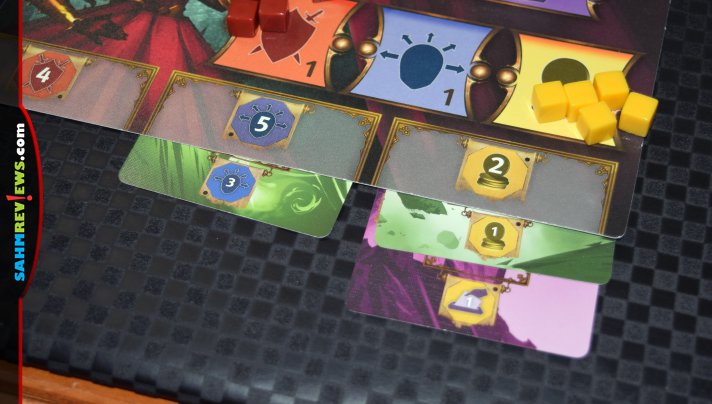 The spaces range in action options including earning gold, culture, military and votes – all resources that are used for a variety of other actions. You can earn points on the power, prestige and popularity tracks by selecting specific locations on the board. Some spaces trigger a region that will help you earn additional resources which are often used to pay for more valuable actions. With as much as I love Gizmos’ engine-building, I thought I would thrive on the part of Pendulum that incorporates this game mechanic. Unfortunately, that didn’t work out well for me…

One of the things I hadn’t mentioned is that there is a victory point track that is strictly for the round’s achievement. Only one player each time is able to earn this difficult feat and additional players to meet the objective earn a consolation prize. So while you think you want to spend those resources on one of the many spaces, you also need to have some readily available to claim this achievement. In addition, each player has their own stack of stratagem cards that allow you to earn a new worker, move a locked one or grab an additional resource. 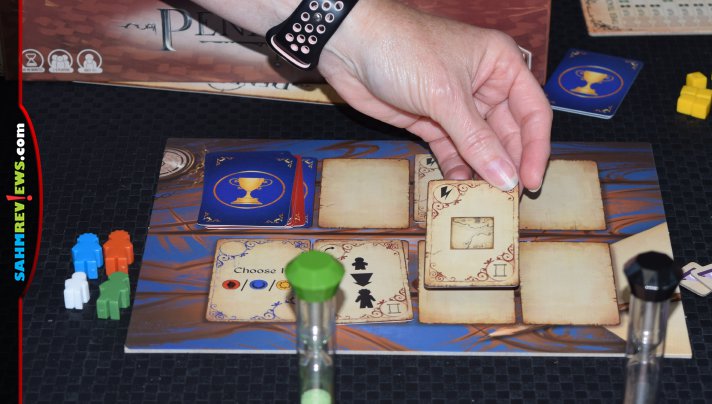 At the end of each round, votes are counted and privilege established. This determines the bonuses you will earn as well as the order that players select from the available council rewards. At the end of the fourth time the council rewards are disbursed, players check their victory points and the one who has not only achieved the minimum requirement for each, but also has earned the most beyond that is declared the new ruler.

I love a good worker placement game like Lorenzo il Magnifico, but the jury is still out on Pendulum. I want to love it and think it has the potential, but we simply ran into too many hiccups caused by the layout and integration of timers. As an example, you WILL physically get in other players’ when you want to reach something on the opposite side of the board. You may think that’s part of the game, but we found it to be especially damaging to the person sitting furthest from the 45 second timer. That spot is the most favorable place to sit because you are able to quickly impede your opponents’ ability to take an action. The iconography of province cards was difficult and we found that it was easy to accidentally put a card in the incorrect column on your player board. It also wasn’t uncommon to find players rushing to place something only to discover they either were placing or removing workers from a locked row or placing a small worker in a space that required a large worker. Pendulum was much more fun when we played it as an untimed game. Even with multiple plays under our belt when card and placement is no longer an issue, I know that the most strategic player will want to sit closest to the section with the 45 second timer.

If you’re ready to tackle the challenge of this real-time worker placement game, you can order Pendulum on Amazon, direct from Stonemaier Games or check with your local game store for availability. Keep time with Stonemaier Games by following them on Facebook and Twitter. We’ll keep ticking away at Pendulum in hopes of finding ways to mitigate the concerns we have.

How do you feel about real-time board games?

2 thoughts on “Pendulum Board Game Overview”