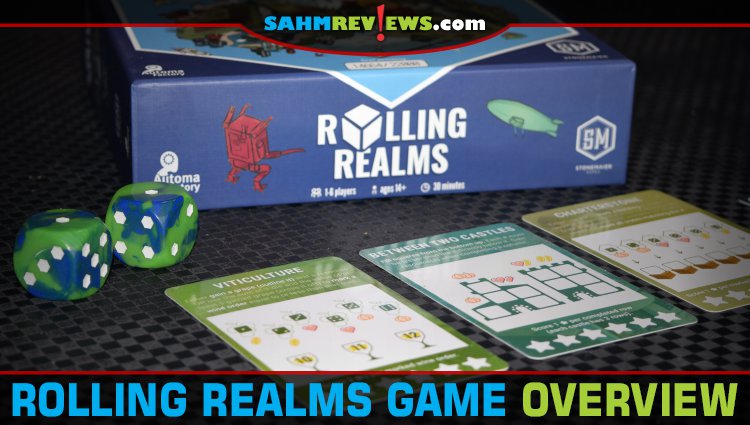 Over the past several years, we’ve introduced you to several games from Stonemaier Games. In addition to the detailed overviews, they have other games that we enjoy as well that we haven’t written about. Charterstone is one of my absolute favorites, but it’s a legacy game and by the time I thought about writing, we had already upgraded the board and it would have been some major spoilers. I had heard a little bit about one of their newest releases, Rolling Realms, but hadn’t invested much time in reading about the details until I had a copy in my hands. What I learned is that the “realms” Stonemaier Games is referring to in the title are the other games in their product line!

If you want a quick overview of the game, check out our 30-second How to Play Rolling Realms video on Facebook. If you’re playing a solitaire game, grab the miniature golf cards and course log along with the components for a multi-player game. Otherwise, leave that in the box and give all players their own set of realm, score and resource cards, a marker, and eraser cloth. The dice will be community property so just place those in the center of the table.

Rolling Realms takes place over three rounds of nine turns each. Players take their turns simultaneously so it’s a very quick game to play. Begin each round by having one player randomly draw three realm cards. All other players will take the same cards, and all will be placed in front of each individual. If you’re familiar with any of Stonemaier Games’ products, you’ll recognize that each realm is an Easter Egg to that particular game. As an example, Charterstone includes crates and Pendulum references sand timers, both which are instrumental parts to those games.

One player will roll both dice then all players will utilize their results. Record the results on your score card then assign each die to a different realm. Your goal is to earn the most stars, but each realm has unique requirements for doing so.

In addition to the stars, you’ll also record resources that you earn along the way. These can be used to change the value of the dice or earn extra ones. While each die in the original (community) roll must be utilized on two separate realm cards, these bonuses earned by spending resources can be used in addition to the community die. Whenever a player spends resources to gain these bonuses, those are only earned by that specific person.

After nine turns, tally the stars earned for that round. Select three new realm cards and begin a new round. After three rounds, the player who has amassed the most stars is the winner. Whether you’re a fan of roll and write games or enjoy other products from Stonemaier Games, Rolling Realms is worth a try. Not only can you play it solo or during a game night, it also can be played over videoconference! Grab a copy direct from the Stonemaier Games website, from Amazon or your local game store. If you’ve been following Jamey Stegmaier and Stonemaier Games on social media (Instagram, Facebook, Twitter) then you’ve already seen teasers for their next release, Libertalia: Winds of Galecrest!

Which of their games is your favorite?