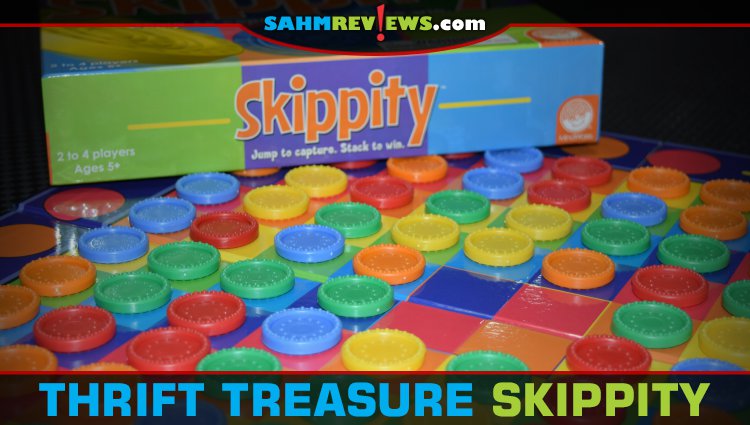 This isn’t the first time we’ve come across a game we’ve never seen before, only to run into it again shortly thereafter. Earlier this week we were shopping at the Goodwill closest to our house when we found Skippity by Mindware Games. The box was open yet appeared to have never been played. Because I’m such a fan of abstract games, it was worth the $2.88 asking price.

Fast-forward a couple of days and we’re in Iowa City to pick up our oldest daughter for the weekend. We arrived early so we stopped at a Goodwill along the way. Amazingly, there was a brand-new example of Skippity on the shelf – still in its shrink-wrap! Of course, I’d prefer a new copy over an open one. The $6.88 price tag on this one made me feel much better about my previous purchase.

The components are simple. Just a colorful board and a hundred Checkers-like pieces called “Skippers”. The Skippers come in five colors and are all mixed into one pile. Randomly put one Skipper on each square of the ten-by-ten board except for the middle four squares. These four leftover Skippers will not be used in the game.

Beginning with the first player and continuing clockwise, each person will choose any Skipper on the board and jump over one next to it orthogonally, landing in the empty space on the other side. Think of Skippity like an exceptionally large version of those peg puzzles you play at Cracker Barrel! You may make multiple jumps on your turn, collecting all Skippers you move over.

The object of Skippity is to collect as many five-color sets of Skippers as you can before there are no more jumps left. Players take turn in order jumping with one Skipper as far as they’d like. The rules do give some strategy tips. Go for as many as you can early in the game, then switch to concentrating on the colors you need to complete sets. Towards the end of a game, do you best to block opponents from completing their sets.

Once there are no more jumps, a game of Skippity ends immediately. If there is a tie for most sets, the player with the most Skippers overall is the winner. If still tied, the tied players share the victory!

Skippity is still available new on Amazon for under $20 and is a fair selection for when you want to play something as simple as Checkers but need to accommodate more than two players. Expect a full game of Skippity to last 15-30 minutes – short enough for multiple rounds! If you find a copy at thrift, make sure all one hundred Skippers are present. While playable with only 96 pieces, it will make the game less random.

Have you ever found more than one copy of the same game at thrift at the same time?