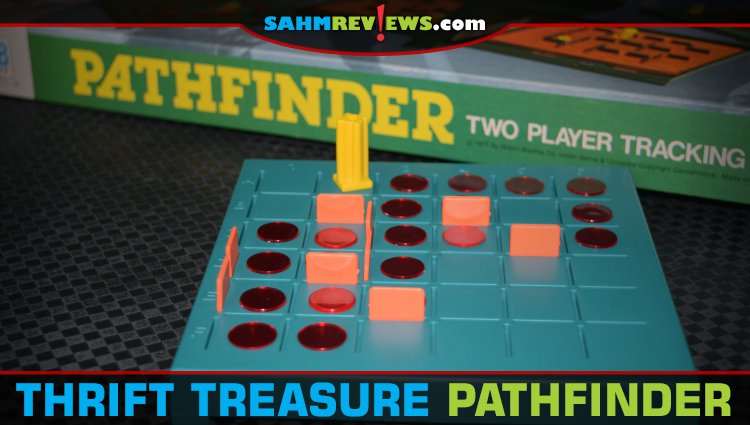 When I think of a game named “Pathfinder”, my first thought is the popular role-playing game by Paizo. In our area it is preferred over Dungeons & Dragons when it comes to RPG’s. It even spawned a video game version a couple of years ago. But that’s not what we found this week at thrift.

Milton Bradley’s Pathfinder was issued in 1974, thirty-five years before the RPG game. This is a completely different tabletop experience. It’s best described as a cross between Battleship and Blockade. In Pathfinder you are building a maze and trying to make your way through your opponent’s, trying to be the first to discover the other’s pawn.

Inside the box is a self-contained board which doubles as a travel container. Set up the game as exhibited in the rules and give each player thirty dark and thirty light barrier chips. They also receive thirty trail discs, two tall pawns and one short pawn. Each player also has a plastic tracking grid which is placed in sight of both people.

First, you’ll place your small pawn on any square on your home grid (the one hidden from the other player). Then you’ll build a maze with your dark barrier chips, making sure there is a clear path to your small pawn from at least one of the squares in the first column. You may use as few or as many of your thirty dark chips as you like.

Once both players have completed their home grid setup, the first player is determined, and a game of Pathfinder begins. Using a tall pawn, enter the tracking board from the left side into the first column and ask the other player if you may enter that square. A “yes” means there is no barricade preventing you from making that movement. “No” means there is a wall there and you’ll mark it on your tracking grid with one of your light barrier chips. At the same time, your opponent will use one of their tall pawns on their home grid to also track your movement.

If you successfully moved your pawn, you keep going by attempting to move to an orthogonally adjacent square (no diagonal movements). Again, if blocked, your turn ends, and you mark that one your tracking board. If successful, put a trail disc on the space you left and take yet another turn. Continue to go from square to square until you receive a “No” answer.

Your opponent will take their turn in the same manner. When you begin your turn already on the board and wish to try another path, simply announce your movement in reverse along the path(s) you’ve already discovered. At any time if your movement is blocked, your turn ends. You may also exit the board from the first column. This ends your turn, but you may enter any other first-column square on your next turn.

Take turns discovering barriers and open pathways. If either player enters the square containing their opponent’s short pawn, they are immediately informed they are the winner of Pathfinder!

While this is the first time we’ve found a copy at thrift, I don’t believe it is particularly rare. The small pieces are easy to lose, so make sure you do an inventory count before committing. Fortunately, there are complete examples and replacement parts readily available on eBay.

Were you familiar with this commonly named game?