It’s probably obvious that we play a lot of board games. At last count we have almost 3,000 in our collection and continue to add each week thanks to our Thrift Treasure series. There’s another type of game our daughters have become fond of and used to play a lot when we were able to attend game nights or game conventions – RPG games.

They have played the official Dungeons & Dragons RPG as well as Pathfinder by Paizo. Additionally, they’ve experienced some other versions based upon these popular rulesets. One of them had the girls taking on the roles of pets trying to solve a mystery! Our oldest has friends who get together online weekly for DnD sessions, where she’s been able to substitute a couple times. Our local game store has a strong Pathfinder following, but they haven’t proven to be acceptable or inviting to teenage girls wanting to play. Which is sad, because she has told me on more than one occasion that she prefers Pathfinder over DnD. But because her friends are playing the latter, recalling the rules for the former makes it difficult for her to sub in for another player.

We found the perfect solution in Paizo’s new offering for consoles, Pathfinder: Kingmaker. This video game version of their popular Pathfinder RPG had previously only been available on the PC and came to life through a successful Kickstarter campaign. Now with its release on Xbox and PS4, we don’t need to read through a rulebook or wait for others to gather for an adventure.

Normally, this is where we’d take you through the game, talking about game play, experiences, rewards and end-game features. But the heart of Pathfinder: Kingmaker is in the story. So any commentary about how the game plays out would be nothing but a spoiler, and that’s not what we intend to do. 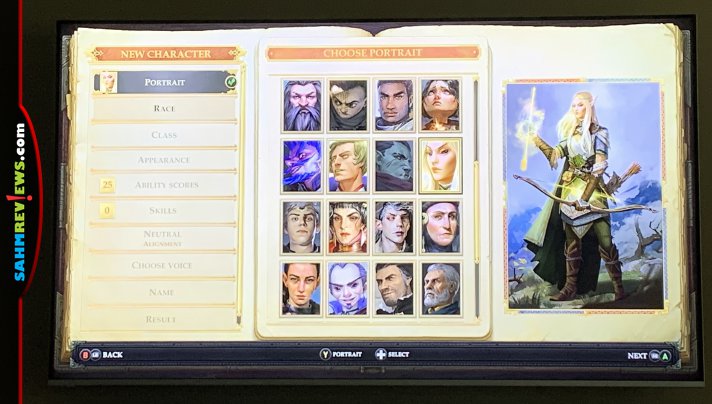 There are a number of attributes to select, starting with your portrait, skills and alignment. 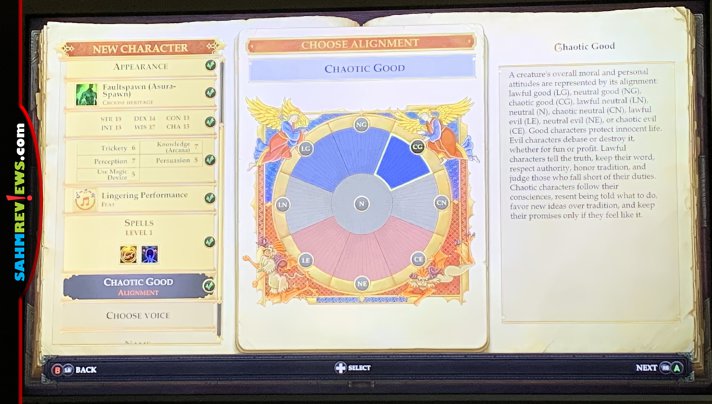 You are encouraged to choose your character’s name which will be inserted into the story. 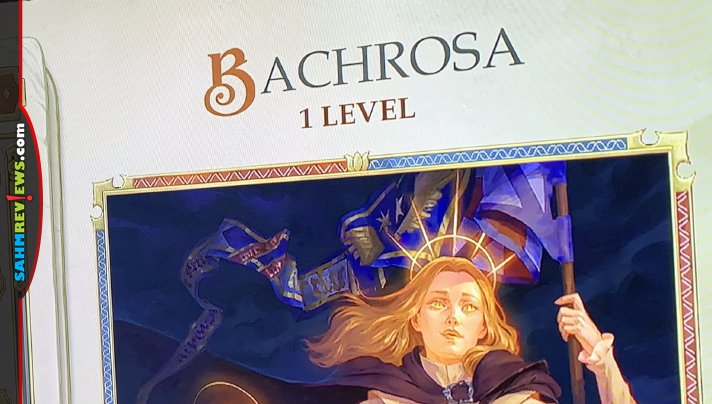 A menu system is always available in-game, which is designed to look like a hand of cards. 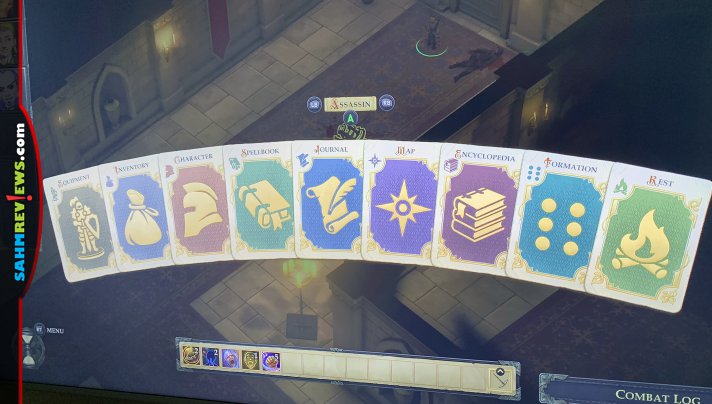 Pathfinder: Kingmaker is usually played as turn-based (although there is a real-time option) and allows you to patiently decide which character to activate and what they will do. 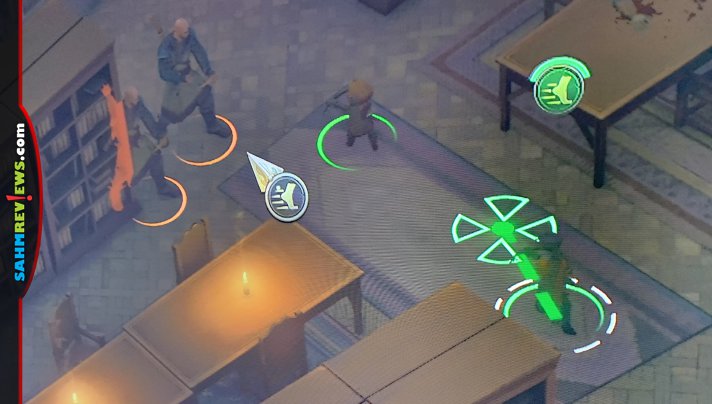 The story is driven by a set of choices, much like the old “choose your own adventure” books we grew up on. 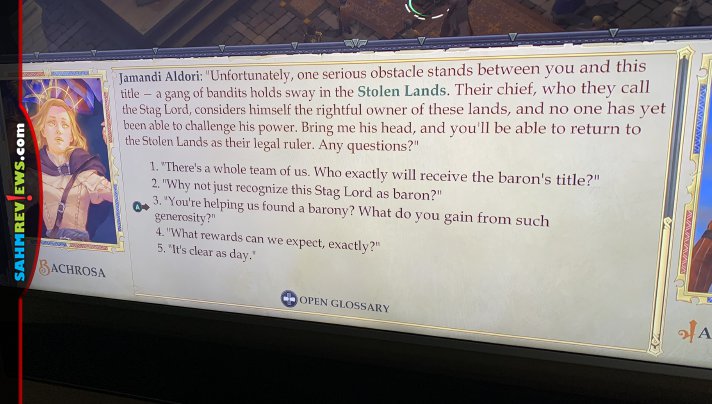 When attacking, you can select which of your party attacks which foe. This allows you to use specialties and abilities in the most efficient manner. 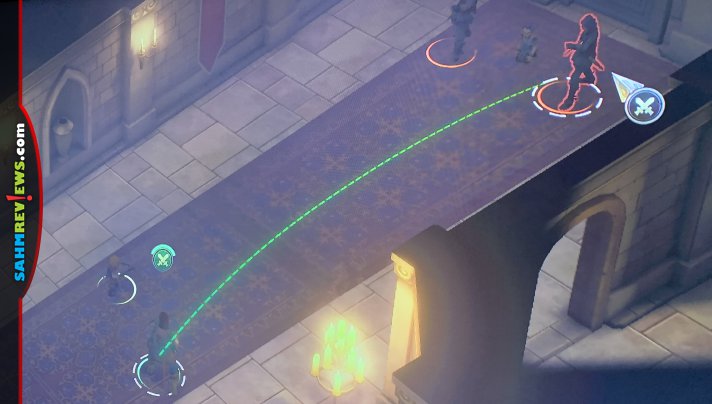 Battles are determined by the software, including showing the results of the correct RPG dice rolls (we would have loved to actually see dice roll across the screen). 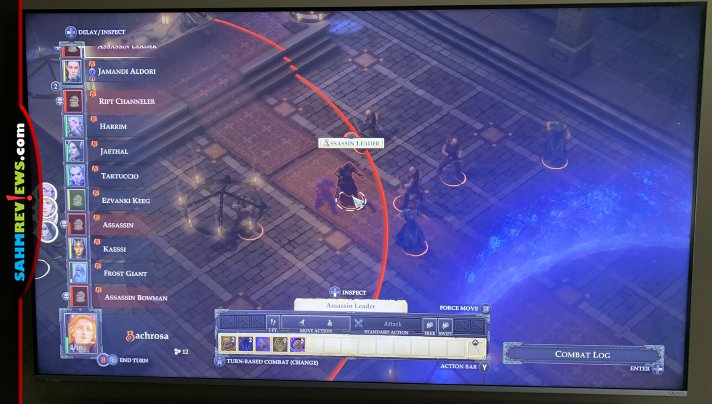 Nearly everything you miss from your tabletop experience is present in Pathfinder: Kingmaker. We’re already a good way into the story (no spoilers, I promised!) and look forward to getting through the whole thing. With no end in sight to restrictions on larger gatherings, we are grateful there are digital solutions for our favorite games, such as this one.

Both the Xbox and PS4 versions retail for right around $50, less than many other new titles. Pick your copy up from Amazon or anywhere video games are sold. If you’re curious about what else Paizo is working on, check out their website or follow them on Facebook or Twitter. Their new Starfinder RPG intrigues us and we can only hope that too will be ported to digital!

Have you ever participated in an RPG campaign?