Re-entry is difficult. If you aren’t familiar with the phrase, chances are you’ve experienced it and just didn’t know how to term it. It’s the crash of getting back to normal life upon return from a vacation or some other exciting activity. We experience this after trips to Disney, but also when we return from one of the many gaming conventions we attend. It’s the struggle to get back into the groove when your mind is still elsewhere. Thankfully, we’re pretty accustomed to it so we plan ahead of time to make the process easier. As Scott pointed out the other day, we even tend to over-plan when we go TO a convention. In this case, we packed games into our suitcase to ensure we had something to do when we arrived a day earlier for Origins Game Fair.

In addition to the Dark is the Night game Scott told you about, we also packed Senshi from Arcane Wonders. Small boxes are awesome for when you travel and this isn’t the first time we’ve taken one of their games on vacation with us. Senshi is a quick game for four players and it’s easy to learn. That doesn’t mean it lacks depth though! 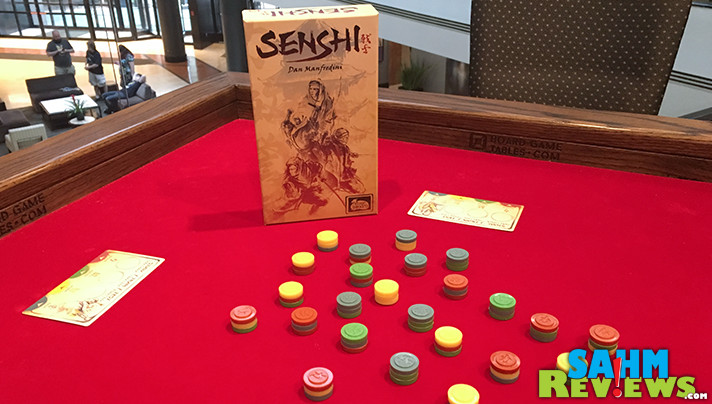 To set up the game, give each player a Training Card then mix the designated quantity of tiles based on the number of players. We usually dump them into the lid, but you could also mix them in a dice bag or onto the table. The next thing you do is blindly make stacks of three and place them in the center of the table within reach of all players. 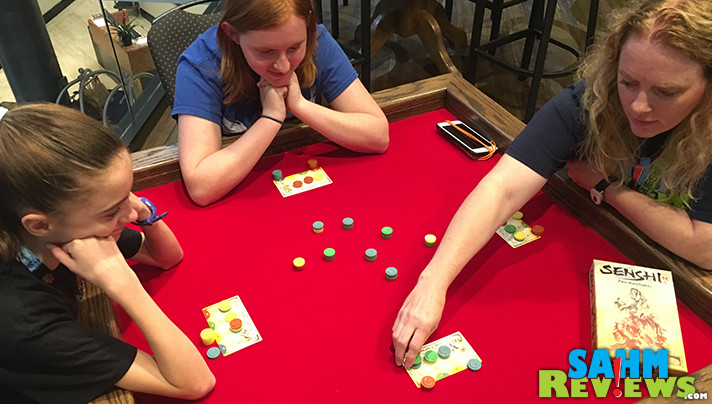 You’re playing as a Senshi, a warrior monk studying under the Master in hopes of becoming his replacement upon his leave from this material life. The person selected to succeed the Master will be the one who has been able to train and develop Strength, Agility, Wisdom and Honor. The goal: Be strong in all four attributes but weak in none! To translate, you’ll need to diversify your training across the various attributes because when the game ends, whomever is weakest immediately loses. But let’s not get ahead of ourselves… 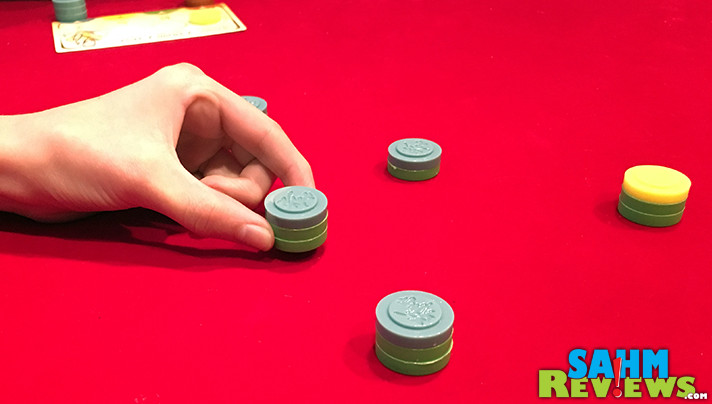 To begin the game, each player selects one stack from the center and hides it in their hand. Hold tight (figuratively, not literally) and why you do this will make more sense. On your turn, select one of three actions: Study, Train or Test. That’s it. You must do one of the actions on your turn – no more, no less. So let’s look at each in more detail. To Study, you simply take one stack from the available pool and place it on your Training Card in an empty spot. If you don’t have an empty spot then you cannot take the Study action. 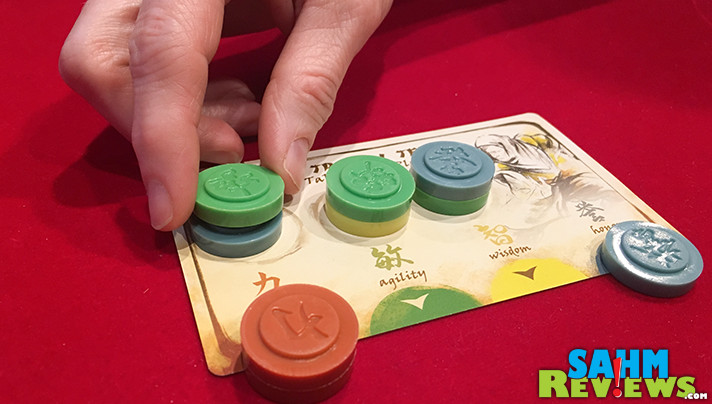 The Train action allows you to take one tile from any stack and place it in your hand. Wondering which stack you can take one from? Any of them. From the community stacks, from your own Study stacks or from a stack that an opponent has studied. Note that the Study stacks are the ones in the circles on your Training Card. The ones in the spaces behind it are what has been Tested already and are safe. You cannot make an opponent “unlearn” something they have already completed.

Wondering about all those tiles you’re palming? They come into play during the third action option: Test. You’ll take one tile from your hand and Test it by placing it in the appropriate scoring section on the bottom of the Training Card. When you do this, it triggers any matching colors on the top of a Study stack if you have any. As an example, the yellow tiles represent Wisdom. If you Test a Wisdom tile and add it to your expertise (scoring section), then you may also move any Wisdom on top of the Study stacks into your completed piles. But there’s a catch. Your opponents can move any of the same color from the top of their Study stacks into their respective scoring areas also. This. This is what the game boils down to. These stacks represent what you’ve accomplished in your quest to become the next Master. Are all your stacks progressing? Do you have one that is lagging behind? Work on it because your weakness could become what fails you. Isn’t that true to life? 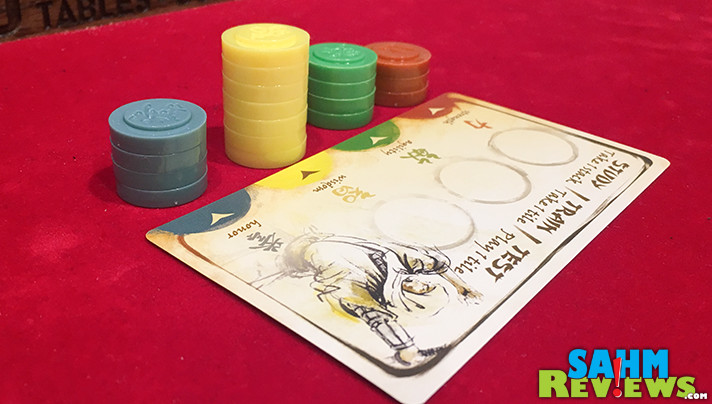 The end of Senshi is triggered when there are no longer any Attributes left to Study. In other words, when a player takes the last community stack and places it on their Training Card. Each warrior-monk will be given one last turn to Test so play continues until it reaches the person who took the last stack. Now it’s time to determine who will become the next Master Senshi. To do so we need to eliminate those who are weakest. Players count the number of tiles in each of their attribute scoring piles. The player (or players, if tied) with the lowest number in any color is eliminated and among the other players, the one with the largest stack of any color wins. If everyone ties then the deciding factor is the largest stack. If everyone but one person ties for lowest then the remaining player is declared the Master Senshi.

We were able to play Senshi at Origins Game Fair multiple times with our family as well as with others and have played it with friends at our local meet-up as well. Teaching it is quick and each time everyone has wanted to play a follow-up game. There’s a lot of umph in this small strategy game and it comes with a MSRP of under $20! Test your skills with a copy direct from Arcane Wonders or order Senshi from Amazon. Study up on what else Arcane Wonders is mastering by following them on Twitter and Facebook.

Which of the attributes do you feel is your weakness?