It’s been less than two weeks since we drove eight hours to attend this year’s Origins Game Fair in Columbus, Ohio. It was an amazing four days of playing games, seeing old friends, playing games, eating out, playing games…and well, you get it, playing games! The second largest convention in the U.S. of this type, it is rumored that over 29,000 people made the same trek as we did!

We do it to get a peek at all the new titles coming out from hundreds of different publishers and to rub elbows with the savants behind their creation. Over the next few weeks we’ll be talking about the best games we got to demo (and bring home!), but for now I want to talk about a couple games that we brought with us to Origins.

What?! We were headed to an event with thousands of board games and we brought our own?! Yes, we did. While the exhibit hall runs from 10am through 6pm, the real fun happens after hours in the common areas of the convention center’s connected hotels where all tables are full with people playing all types of board games. And since we were arriving a full day before any of the events would begin, we knew we’d need something to keep us occupied!

The first game we grabbed was Dark is the Night by APE Games. We specifically chose it because it comes in a small box and plays quickly (around 15 minutes). While it only supports two players, the short play time allows us to switch in and out, giving everyone a chance at winning! Plus it is very quick to learn and there is virtually no setup!

Inside the box you’ll find a tiny board, a Hunter figure, a Monster move dial and various tokens. One person will play Dark is the Night as a Hunter who has set up camp in a dark forest, while the other takes on the role of a Monster who is obviously after the Hunter. The Monster player receives the Monster dial (along with a feint token) and secretly chooses which numbered space on the board they will start on. The Monster only exists in the shadows and is limited to the twelve spaces immediately outside the Hunter’s campsite. The Monster dial is set to the number matching the starting location and is kept hidden from the Hunter. 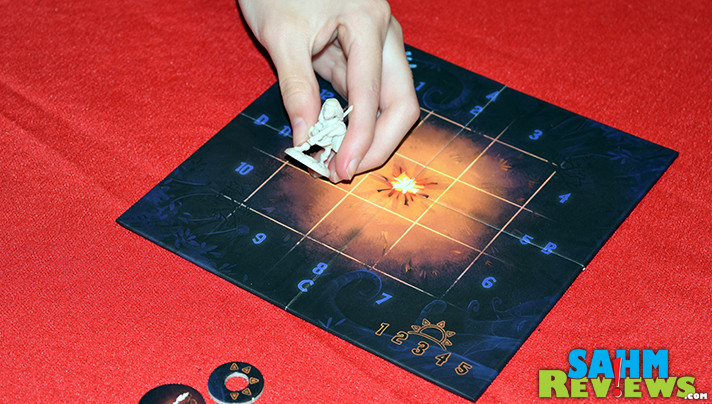 The Hunter then chooses their starting space by placing the included plastic miniature on one of the eight inner spaces around the campfire. Before the game begins, the Monster gives a clue as to its position by revealing the general direction it is in (basically north, south, east or west – signified by letters on the board). The game then begins with the Hunter taking the first turn. 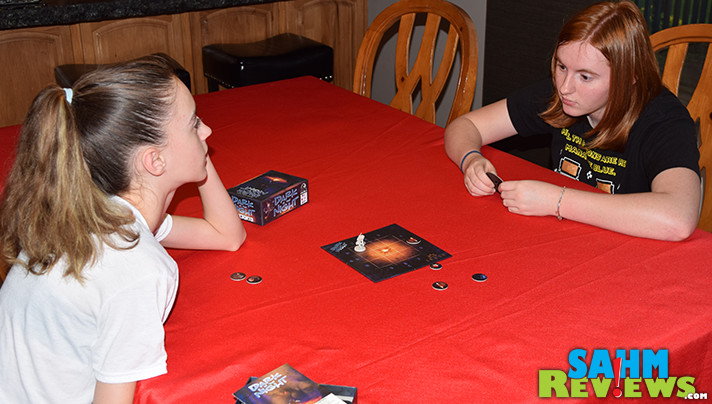 There aren’t many rules to remember when playing Dark is the Night. Even though the two participants are playing different characters, they both operate in pretty much the same manner. On a turn you will move your character to an adjacent space in your area without jumping or skipping any spaces. Once moved, an action may be taken (optional, and not in the first round). For the Hunter this varies from simply attacking into the adjacent space in the darkness to playing a token. Tokens are one-time use and range from using your crossbow to fire across the board (and maybe through the fire) to setting traps or purposely leaving food behind as a lure. 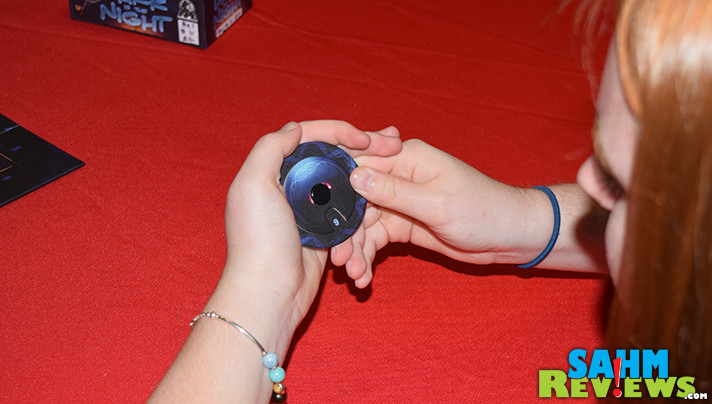 The Monster doesn’t have quite as many things in their arsenal. They may either move and attack into an adjacent lit space or play their one Feint token, which uses up their entire turn. The Feint action is meant to confuse the Hunter and after revealing which space the Monster is currently on, allows the Monster player to then move zero, one or two spaces away from the Hunter. Play then continues as normal, with the Hunter taking their turn. 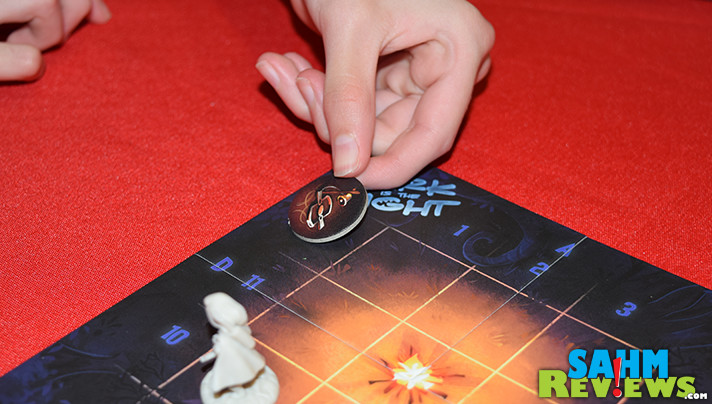 After the Hunter has played their last token, a five turn limit is added to the game which is tracked with a sun token marking the turns on the board. If neither player has successfully attacked their opponent by the end of the fifth complete round (only one successful attack is needed to win), Dark in the Night ends as a tie.

At under $20 on Amazon, Dark is the Night is a good value no matter whether you travel a lot or not. If you’re interested in learning more about what APE Games is doing, be sure to check out two other games we’ve featured over the years:  Major General – Duel of Time and Rarrr!!. Additionally, stalk their Facebook and Twitter feeds to find out when their next Kickstarter campaign will go live!

This may have been the first game we grabbed for our trip to Origins, but it wasn’t the only one! Check back in a couple days to see what else made it into our travel bag! Until then, enter to win a copy of Dark is the Night and you may win it to pack for your future travels.

Dark is the Night Game Giveaway

28 thoughts on “Dark is the Night Board Game Overview”