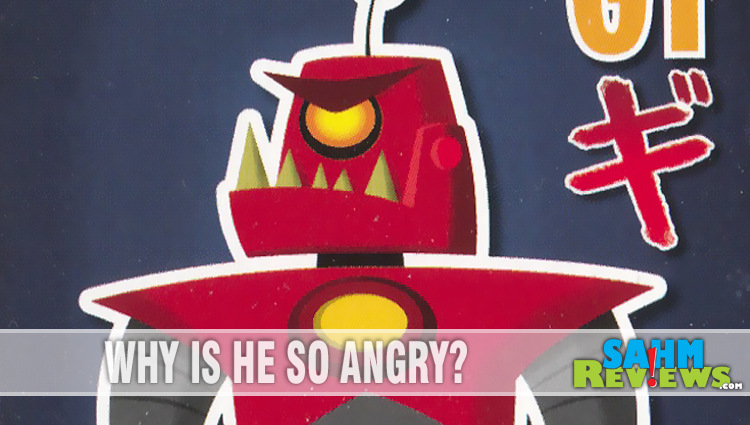 Did That Monster Just Say “Rarrr!!”?

Yesterday we told you about Yashima, an anime/fantasy battle game with a ton of depth and strategy. At my age when I think of a Japanese theme, I think of the old black and white Godzilla movies I used to watch on Sunday afternoons. It was amazing to see him and another Kaiju fight over (and usually inside) a city.

While many others gamers are getting their movie monster fix by playing the ever-popular King of Tokyo, we found a game that not only comes in a smaller box, but supports up to six players! And as a bonus, the game isn’t hinged on the luck of rolling dice! Rarrr!! by APE Games might just be the sleeper monster battling game you’re looking for. 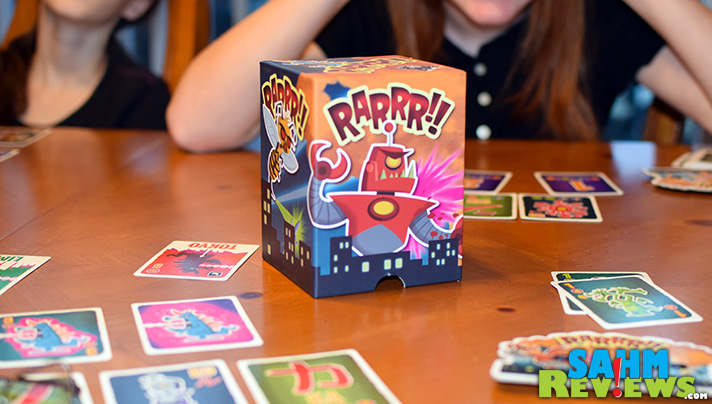 In Rarrr!! you and up to five other players are vying to take over cities around the world with your custom-made Kaiju. 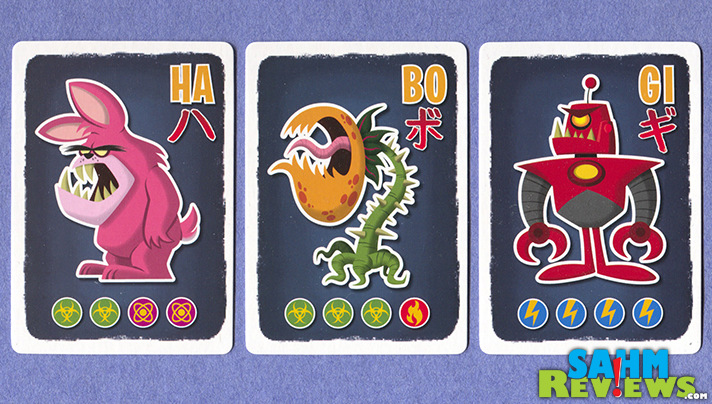 Before the game begins, players get to ‘build’ their own monster through a drafting technique, paying attention to the symbols at the bottom of each card. 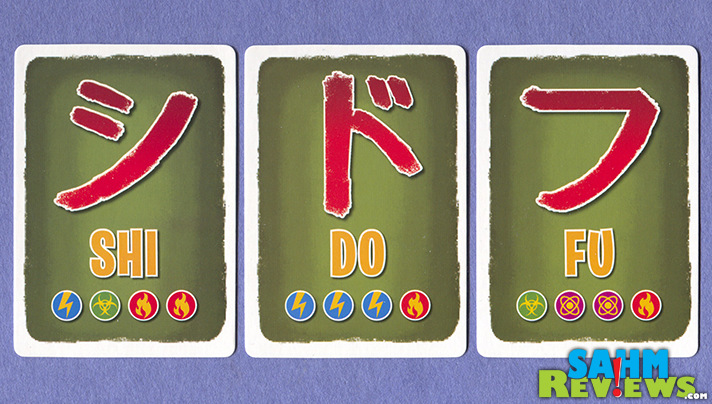 These four different symbols represent the suits of cards, and represent a kind of ‘hand limit’, although they don’t apply to your hand, but to the amount of destruction you can bring to the battle for each city. 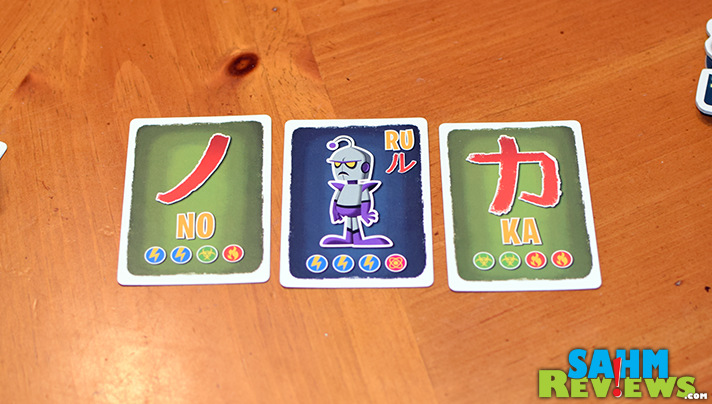 Arrange your monster card and these two drafted “Katakana Cards” in any order to give him (or her) a name. After announcing your new title (in this example, NoRuKa) and giving a sample of the roar your monster will make when taking over a city, you are ready to play. 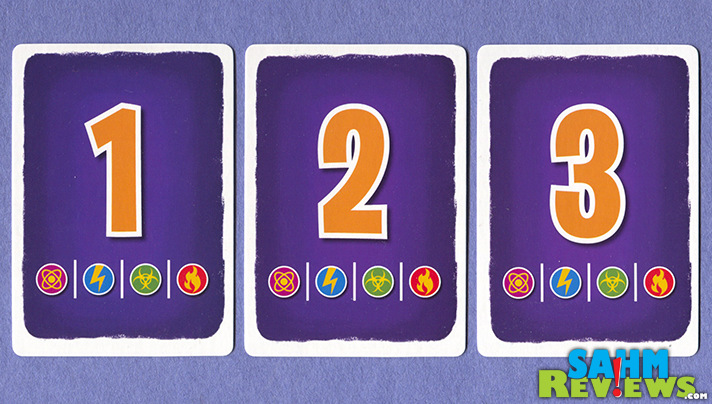 Each player receives a set of three “Power Up” cards that can each only be used once per game. Think of them like wild cards, adding to your total. 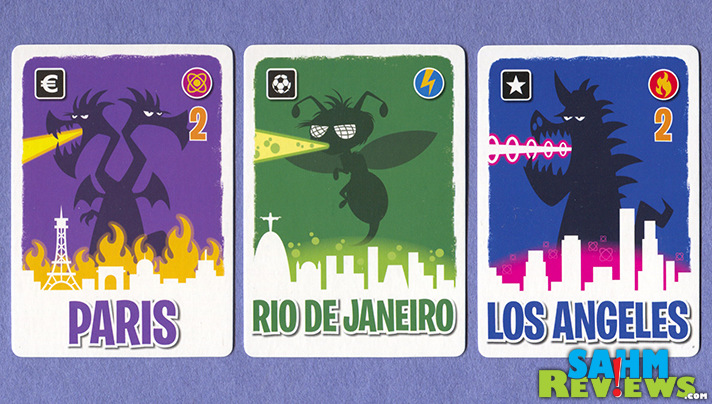 Six cities are fought over in each of the three rounds. Each city is worth a different amount of victory points and the overall winner will be the person who collects the most VP’s. 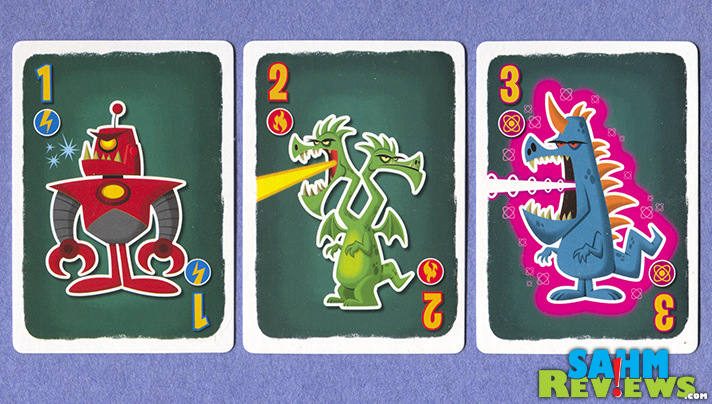 You’ll also start with a hand of twelve “Power Cards” which you’ll use to bid for the city.

Included is also an “Angriest Monster” card that acts as a 1st-player token. At the start, the angriest players gets to begin (this alone was a ton of fun picking out who was currently the angriest). This person decides which city to fight over first. 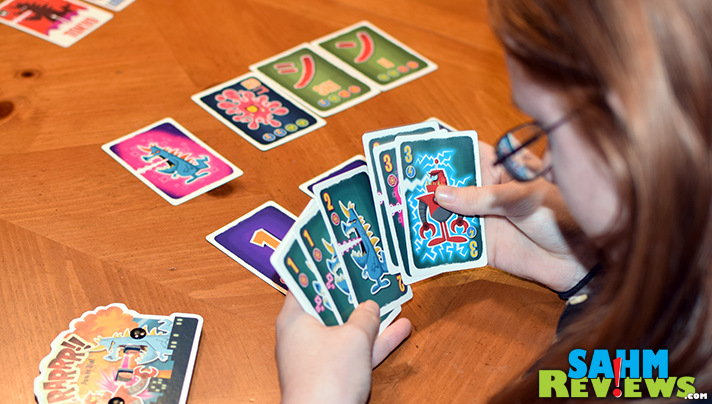 Going around the table in order, each person ‘bids’ with their Power Cards. Remember, your monster has a limit on how many of each symbol it can play in each city, and you can only play a symbol once (once you play it, you cannot add to it). Your score is determined by both how many cards you play of a suit and their value. Add up the values and multiply it by the number of cards played (do this for each suit) and you have your score. Now the next person has to beat it or pass.

If you’re the last monster standing, you receive the city and discard all of the cards you bid. If you passed, you also have to discard all of your bid cards, but get to put one of your choice back into your hand. If you were the last to pass, rescue two cards AND become the angriest monster!

The round continues until all cities are won or there are no more Power Cards to bid with. A total of three rounds are played, with each person receiving a fresh hand of twelve Power Cards and six new cities to fight over.

Remember the Power Up cards I mentioned? You can add them at any time to a set, increasing the base value (but not the multiplier). They are one-time use, and you will lose them even if you don’t win the city, so playing them at the right time is imperative. 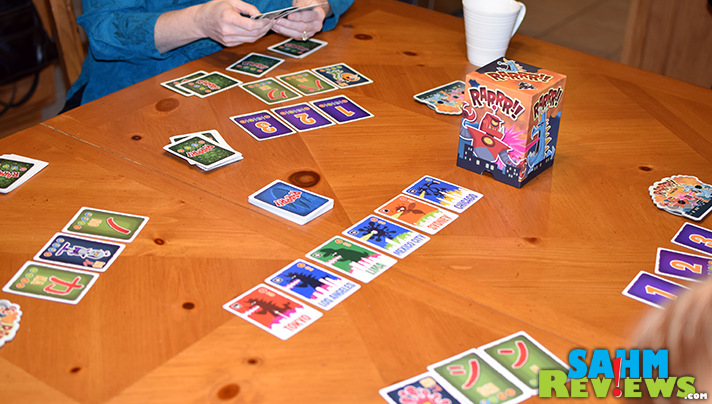 After three rounds, add up the victory points on each of your cities and compare totals. As expected, the highest total wins the game. After playing a few games, you’ll probably elect to begin using the advanced scoring rules, which give bonuses for collecting city cards of the same color and for collecting different colors. You can also elect to have the Power Up cards counts as a multiplier instead of adding to the base score as an option. Lastly, each city card has a matching symbol on it that acts as a resistance. If you’re fighting a city with a lightning bolt on it, your hand size for lightning bolts is one less than your monster currently shows.

There’s quite a bit of game play packed into a 4″ x 4″ x 5″ box, and is easily played by children as young as 7 or 8. The fact that it supports up to six players makes it great for extended families and get-togethers, and the low price of under $20 means it won’t break the bank.

APE Games has a number of other titles available in many different themes. Check out their website and I’m sure you’ll find at least one that could be a future favorite. Their Twitter and Facebook timelines are full of gaming news so be sure to subscribe!

Did you grow up watching Godzilla on TV? Who was your favorite opponent of his?